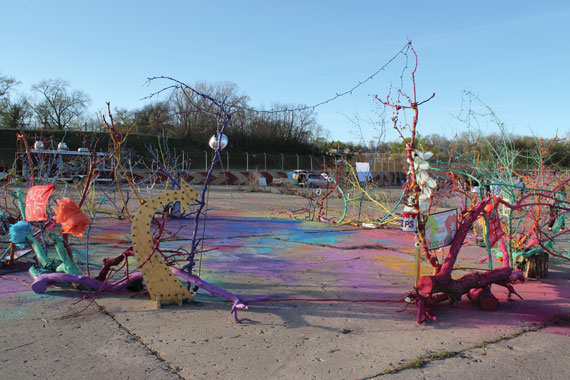 It takes a creative mind to look out over the empty lots on which several General Motors plants once stood and think, “I could see an art festival being held there one day.” This thought did enter someone’s mind, giving birth to the Free City art festival that took place the first weekend in May at Chevy-in-the-Hole in Flint.

Chevy-in-the-Hole is the name given to the 130-acre flat lot stretching from Grand Traverse Street to Chevrolet Avenue. Recent efforts to reclaim the area for green space have included a process called phytoremediation, which is the decontamination of an area by planting trees that can withstand and even remove pollutants from soil.

Stephen Zacks is the Executive Director of the Flint Public Arts Project, the organization behind the Free City art festival. The Flint native got the idea to conduct Free City in his hometown from various sources. “It’s really influenced by many types of projects,” he said. “Although similar things have taken place, to do something on old manufacturing grounds is a little different; it’s new to Flint and to the region.” After a call for proposals and the support of several organizations, including the Flint Institute of Arts, Red Ink Flint, Fractured Atlas and ArtPlace, which is backed by the National Endowment for the Arts, Zacks began to coordinate one of the most unconventional conventions to ever take place in Flint. Artists and admirers came from across the U.S. For example, an artist from Kingston, NY, who goes by the name of Gagnakon Agnorak, brought his elaborate pseudonym and his even more elaborate artwork, which was made with scrap materials, for display.

Mayor Dayne Walling and Congressman Dan Kildee were on hand for the event’s kickoff, which featured a welcome from Zacks, a few words from Kildee, and the presentation of a check for $10,000 from General Motors to the City of Flint to purchase additional trees for the recent phytoremediation efforts. Mayor Walling told My City Magazine that he was excited about the new things happening in a space with so much history: “It’s wonderful to see so many innovative approaches and creative ideas for turning this site into something meaningful to the community.”

Free City featured unique art and a steel drum band by day and a major party by night. When the sun went down, out came a deejay with a dance floor, cars with karaoke, and projection screens for film and illuminated art. Indeed there has been nothing like it in Flint before. Zacks says he would like to see the event gain momentum in coming years, which seems likely, given the rapidly growing arts community in Flint. So, the next time your friend who specializes in distinctive artwork says that there is nowhere to showcase his creations, tell him you have just the place in mind.