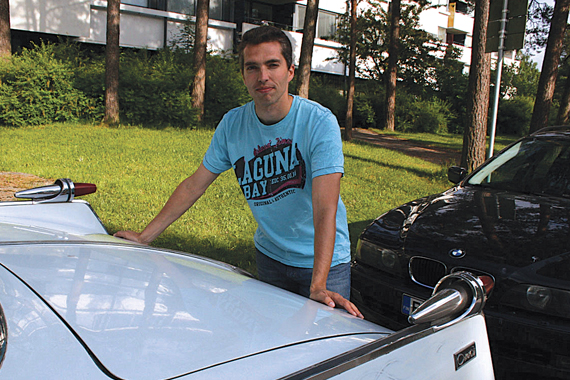 Journeys to Flint throughout the 20th century in answer to the call of General Motors is well-documented. People from all over the United States and even the world left their familiar habitats to make a living “on the line.” Vestiges of the progeny of these various people groups are here to this day; but as far as massive migration to Flint is concerned, things have tapered off greatly, yet there are still those abroad whose eyes are firmly fixed on Flint. Finnish national Markku Jaakkola is one such person who longed to be where his favorite industry rose to prominence.

A classic car enthusiast, Markku studied automotive engineering at Turku University of Applied Sciences in his native Finland, a focus unlike that of many of his peers. Automobile production is not a Finnish strong suit; there is but one automobile factory in the whole of the land, called Valmet Automotive. After graduation, Markku worked for Nissan Nordic Europe in their warranty department, but he longed to play a larger part in the production of automobiles. After a stint with Ford of the United Kingdom and brief travels throughout Finland, Estonia, Latvia and Lithuania, he decided to follow in the footsteps of his brother, who came to America to work in aviation. Markku traveled to the U.S. in September of 2012. His brother’s wife is from Detroit, and as luck would have it, she knew people in Flint, particularly at Kettering University. As Markku sought out universities for graduate school, he narrowed down his options to Kettering and the University of Michigan Dearborn, and after researching the nation’s top engineering schools and finding Kettering in the top slot, he decided to move to Flint to pursue his master’s degree in engineering management.

The Finns in Michigan are typically known to have settled in the Upper Peninsula in the mid-20th century to work in the copper mines. Some have preserved their Finnish culture, while others have assimilated. Markku is at present a bit anomalous in that he came to mid-Michigan in the 21st century to pursue what some deem to be an archaic industry in a town others consider to have lived out its glory days, but Markku thinks no such thing of Flint. He sees opportunity here for himself and others, and is very optimistic as he looks around at Kettering’s student body. “There are a lot of students with all kinds of new ideas,” he says, and he perceives that Americans are “very open minded,” a trait that he thinks is lacking back home in Finland.

As he nears the end of his studies at Kettering, Markku is now looking for work with priority given to jobs that will keep him in Flint. “I would like to stay in Flint,” he says, “but it depends on work.” Above all, he would like to work in product development for any one of the Big Three; in the meantime, he continues to display all the traits of someone who would like to put down roots where he is. He is a part of the community, not just because he is an active student at university, but because he also volunteers his time at Sloan Museum. Flint has quickly become home for this Finn, and this is where he wants to be. “I like Flint, and to my understanding, things are getting better here,” smiles Markku.

Well, where there is a person willing to be a productive part of our world, may we be quick to respond and welcome him home. Welcome to Flint, Markku! We hope you stay a while.