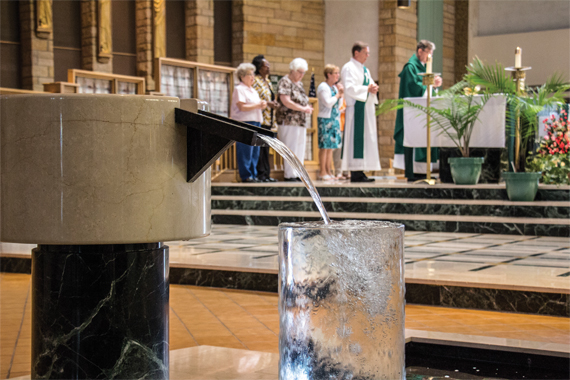 The afternoon sun glistens through the hand-crafted stained-glass windows of the main chapel of St. Michael’s Catholic Church, dancing on the floor in a kaleidoscope of colors. Every day, the doors of the Downtown Flint church are open to those who wish to reflect in quiet solitude or enjoy a moment of prayer. “We open the doors for anyone who wants to come in to pray,” said Michael Dear, Deacon of the parish. Folks from all denominations have accepted this invitation over the years, coming to sit in the little chapel for a time of reflection away from the chaos of everyday life.

The inner city church, which is celebrating its 170-year anniversary this month, is rich in history. Deacon Mike took time from his busy day to chat with My City Magazine about the church’s planned celebration and its unique history. St. Michael’s dates back to the early 19th century, when five Irish Catholic families began holding prayer services in Flint in 1834, and requested a priest from the bishop in Detroit to preside over them. In 1843, a priest came to establish St. Michael Roman Catholic Church at what is now the corner of Fifth Avenue and S. Saginaw Street. Still known as “the Irish Church,” St. Michael’s attracts more people on St. Patrick’s Day than on Christmas, and at the suggestion of a parishioner, Mass begins at 12:02 pm, because the Irish are always late. It was the Mother Church (read: principal in origin, size, and oversight) for Genesee County and the only Catholic Church serving the area for 25 years.

Three churches have been built at the same site over the years to meet the needs of the parish as it grew, says Deacon Mike. The first was built in 1844 and served the community for nearly 40 years. By 1880, Flint had grown to the extent that the first church was inadequate in size, and so the second church was built. Constructed of red brick, the imposing edifice served the parish for 81 years until the building currently used by St. Michael Church was built in 1966. The nearby convent, built for the Servants of the Immaculate Heart of Mary, now houses Catholic Charities, a non-profit organization dedicated to serving the needy. Deacon Mike says that the history of the city of Flint parallels the history of St. Mike’s. “The two are intertwined,” he said.

Mary Ellen Pierce was born and raised in Flint, and is a longtime St. Michael’s parishioner. Her great grandparents helped construct the church’s first building, and Mary Ellen continues the legacy of service by running a breakfast program out of the church. Each Saturday from 10-11am, she helps serve breakfast fare, casserole dishes, goulash, chili and Sloppy Joes to approximately 140 people from all walks of life. She describes St. Mike’s congregation as one strong in family tradition. Like Mary Ellen, who moved away at one time but returned in 1992, generations of families continue to come back. Some return after time away because of the family tie, as their parents, grandparents and great grandparents had been married there, or because they had been baptized there. “There is just something about this parish,” says Mary Ellen. It’s also very diverse, says Deacon Mike. People from all walks of life and races are represented; Asians, Whites, African-Americans, and Hispanics worship side-by-side every Sunday. When Fr. Charles Irvin visited, he described St. Michael’s as the true picture of the Catholic Church: a community of people from different backgrounds united by their faith. “We are all one big family,” says Deacon Mike, “and this is God’s church.”

As parishioners walked through the doors of St. Michael Catholic Church each Sunday, they are welcomed by greeters with a warm smile and a handshake. “I love the diversity here, and the fact that it is family oriented,” said Rosemary Waters. Vincent Palmer, 10, said he enjoys coming to mass on Sunday mornings with his grandmother, Peggy Goodal. Delia Refice, who is still young at 95 years of age, is a lifelong parishioner. “I made my first Holy Communion here,” she exclaimed. The tiny woman, wearing a scarf on her head tied under her chin, pointed out the flower arrangements in the church, which she has enjoyed creating for many years. “I’ve always worshipped here,” she said, “because it’s home to me.”

An important priority of St. Michael’s is involvement in the Flint community. The church promotes education through its Flint Newman Center for Catholic students. Deacon Mike said the students gather from all of the local colleges and area schools to worship and to share a meal. The group meets on Tuesdays at 6pm from September through April. Twelve-step recovery groups also meet at St. Mike’s on a regular basis.

The church is also involved in FACT (Flint Area Congregations Together). FACT is a faith-based movement whose mission is to transform Genesee County and bring people of faith together to build community and address the root causes of poverty, violence and division. St. Michael’s also offers a Religion Education Program during the school year for students from the first grade through high school. The goal of the church is to continue discovering opportunities to become more involved in the Flint community.

Parishioners are looking forward to St. Michael’s 170th Anniversary Celebration, planned for September 28, which will begin with the five o’clock mass. Following the service, a dinner will be served and attendees will enjoy a DJ, dancing, and both silent and live auctions to help fund St. Mike’s outreach activities. Tickets will be sold in advance for $15 and at the door for $20. The theme of the evening is St. Michael the Warrior. Deacon Mike, who will be decked out in full warrior gear for the occasion, is hoping for a huge turnout for the anniversary festivities. “Thousands of people have walked through the doors of this parish,” he said. “This will truly be a celebration.”

Are you interested in purchasing photos from this story? Go HERE and select the “St. Michaels” category.