Economic confidence was high at the beginning of the 1980s. Wall Street and the banking industry were set to explode and when Reagan trounced Carter in the general election, the days of big business began. The excess of the 1980s was not simply limited to capitalism. The “Miracle on Ice” occurred at the 1980 Olympic Games in Lake Placid, NY, propelling Americans into a red, white and blue frenzy. Patriotism was at an all-time high, and Reagan rode it all the way to another landslide victory against Mondale in 1984. Even the Iran-Contra affair in 1986 did nothing to erode support for the President. George Bush continued where Reagan left off after winning the general election in 1988, defeating Michael Dukakis.

Despite all of the positive vibes of the ‘80s, tragedies did occur. In the early months of 1980, Mt. St. Helens erupted killing 57 people and forever changing the landscape of Washington State. Then, in 1986 the space shuttle, Challenger, exploded graphically during its accent, killing all seven crew members. The year 1989 brought the second most devasting oil spill in history, when the Exxon Valdez crashed in Prince William Sound, AK dumping 53 million gallons of oil into the ocean. The biggest event happened at the tail end of the decade, when the Germany’s Berlin Wall was brought down.

While the ‘80s were a decade of unbridled wealth and excess for the rest of the nation, Flint was desperately looking for a solution to its dwindling tax base and rising unemployment. The city had lost traction and was spinning its wheels looking for an immediate solution to its problems as citizens continued to have faith in their hometown. Here’s Flint in the 1980s. 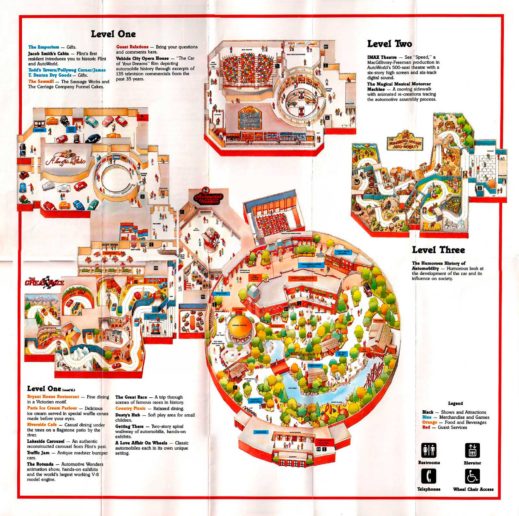 The internal map of AutoWorld, once thought to be the savior of Flint. After a week of success, attendance dropped drastically and the park was forced to cease operations in two years.

On August 23, 1980, TVs around the state were tuned to a newly created station, WFUM TV28, watching a live production of the Crim Road Race in Flint. Citizens tuned in to see if their friends and neighbors would run across the screen. Affiliated with the University of Michigan-Flint, WFUM TV28 would be the area’s public broadcasting station until ceasing operation in 2009. The Crim would be broadcast live each year until 2007.

The Presidential election brought Reagan and Carter to Flint. Reagan garnered great support from Flint residents as he railed against Carter’s economic and fiscal policies. Reagan was smart to bring up economics in Flint, a city that was rapidly losing jobs and tax revenue. Flint’s biggest employer, General Motors, was falling into trouble. The year 1980 was the first year since 1921 that GM registered a year-end loss of more than $750 million dollars as sales plummeted. In order to control costs and compete with foreign auto manufacturers, new CEO, Roger Smith, began to shut down factories throughout the nation, despite UAW concessions, and moved manufacturing to Mexico. Flint Mayor, James Rutherford, and the City Council knew that Flint factories were on the chopping block, so they enticed GM with numerous tax abatements. At first, GM took the bait and created the Truck and Bus group in 1981. It wasn’t enough, however, and GM would soon close Fisher Body 1, Chevrolet Plant 4 and others. The Buick plant was also due to be closed, but was saved by factory management and officials when they comprised a plan in 1982, based upon the Tokyo model for building vehicles. In 1984, GM formed the Buick Motor Division and Buick City went into operation soon after. Despite the new concept, jobs were still lost to increased automation. The rift between GM and the city that created it truly began in the 1980s and it would only continue to grow in the coming years and decades as the company continued to divest itself of Flint.

Recognizing that GM would most likely leave the city, Flint’s leadership searched frantically for something, anything to keep tax revenue and grow investment in the city. They turned to an old idea from C.S. Mott. In 1969, Mott let it be known to Joseph Anderson that the city should house a museum that would show the importance of the automobile to society. This idea was again brought up by Anderson. The plan morphed from a simple museum into a small-scale amusement park. Plans were drawn up by Randall Duell & Associates out of Santa Clarita, CA (Randall Duell & Associates created amusement parks throughout the U.S.). Randall Duell projected first year attendance for the theme park to be 750,000 and 1 million persons thereafter. Everyone was onboard. The Mott Foundation gave $11 million to the project, $36.5 million came from public funds and GM contributed $1 million. The cost of the project soared to more than $80 million.

Excitement for the new amusement park brought more development to Flint. At a cost of $30 million dollars, the Hyatt Regency Hotel opened as the sixth-largest hotel in Michigan. It focused on the success of the upcoming park and Flint’s downtown nightlife to attract guests. In ten years, the hotel was sold for the first time and changed hands multiple times thereafter, before becoming a part of the UM-Flint in 2015. In 1982, Windmill Place was constructed to house commercial buildings and a food court. This also failed before the decade ended, culminating with the razing of the main two-story food court building in 2007. And, just prior to the grand opening of the park, plans were designed for creation of the Water Street Pavilion, constructed to hold multiple small businesses and eateries. It was predicted that the marketplace would bring two million visitors a year to Flint. The pavilion opened in 1985, and within five years, most tenants had left due to a lack of customers and the building became a part of the UM-Flint in 1990.

In 1984, James Sharp became Flint’s first African-American Mayor elected by vote and was one of the officials on-hand to open Six Flags AutoWorld, hailed by Michigan Governor, James Blanchard, as the savior of Flint. The indoor theme park saw nearly 140,000 people in its first month of operation and then, attendance fell sharply. In two years, AutoWorld would cease daily operation, shutting its doors for good in 1994. Demolished in 1997, AutoWorld is one of the biggest business losses in Michigan’s history. City of Flint officials were left reeling, with no answer to addressing the plight of the city.

While the AutoWorld tragedy was unfolding, the citizens of Flint continued to move forward. The true winners of the early ‘80s in Flint, the musical group Ready for the World broke out with multiple hits, including their number ones “Oh Sheila” and “Love You Down.” Athletic excellence continued with three consecutive state basketball titles for Flint Central under coach Stan Gooch from 80-83, and two straight state basketball titles after that for Flint Northwestern under coach Grover Kirkland. 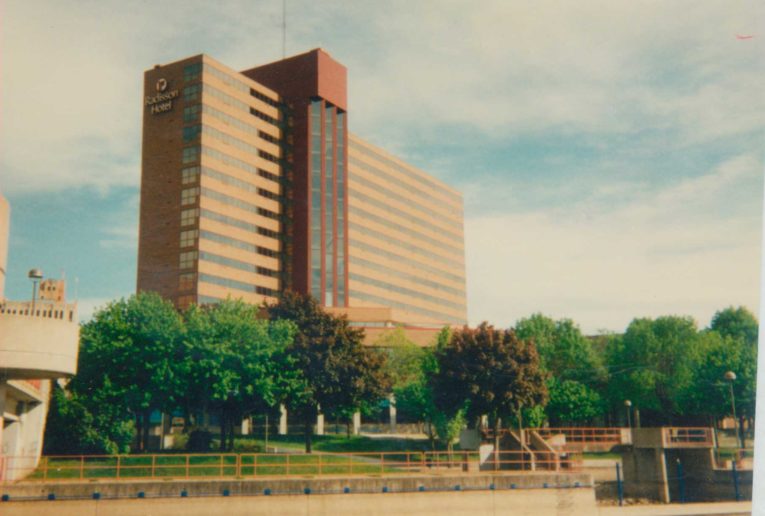 The Hyatt Hotel was opened in 1981, hoping to capitalize on the incoming amusement park and local night life. Photo provided by Flint Public Library 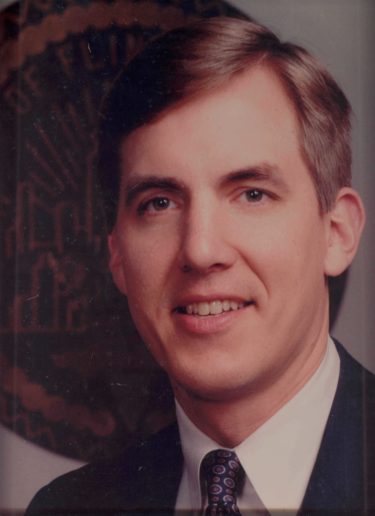 The second half of the decade emphasized Flint’s rich musical history. In 1985, the city hosted the Basically Bach Music Festival. The six-month festival stretched from February to July, and presented 40 concerts celebrating the composer on his 300th birthday. Margarette Eby, a UM-Flint provost and music professor, organized the momentous affair to great success. Tragically, in November 1986, Eby was found dead in the gatehouse at Applewood Estate in a scene that shocked the community. Her murderer eluded justice until 2003 when DNA evidence taken at the original scene convicted a Genesee County man. He confessed to the killing and received a life sentence.

When not enjoying one of the many Bach concerts in 1985, Flint citizens were tuned into the rock station WWCK 105.5, newly ranked as the best rock radio station in the nation. Broadcasting began in 1964 and exploded when the legendary local deejay, Peter Cavanaugh, took over. Besides playing great rock music, WWCK produced popular radio shows. One of those was “Buffalo Dick’s Radio Ranch” starring Jeff Lamb and the great Robert Paulsen. Started by Lamb in his basement, the show was named “best local programming in all markets” by Billboard. Lamb took the show into national syndication while Robert Paulsen went on to Hollywood where he provided voices for hundreds of characters including Yakko of “Animaniacs”, Pinky from “Pinky and the Brain”, and Raphael and Donatello of “Teenage Mutant Ninja Turtles.” The other big hit was the Sunday morning talk show “Radio Free Flint” hosted by Michael Moore, who invited residents to call in and share their insight on all sorts of local political questions and problems, of which there were many. When John Lennon was murdered in December 1980, WWCK held a memorial at the Capitol Theatre that was attended by hundreds. After changing ownership in 1989, the station would change its format to Top 40.

The same year that WWCK was providing the very best in rock music, a young man in Flint wanted to experience the music first hand. Joel Rash wanted a place where young adults under the age of 21 could go to hear live rock and local music. He started the now iconic Local 432 in Downtown Flint. The Local is the place to see local bands and find new favorites. Throughout the years, the venue has hosted bands such as the Guilty Bystanders (first to play there), Diver, Chiodos, Kid Brother Collective, The Swellers and more.

The 1987 mayoral election was a heated affair, pitting incumbent, James Sharp, against the “young whippersnapper,” Matthew S. Collier. Collier won the election by 4,000 votes and immediately made waves. On his first day in office, he fired the city’s entire executive staff, was forced to deal with a large oil spill on the Flint River, received a death threat and learned of an effort to begin recall proceedings against him. During his tenure, the City of Flint was able to strike a deal with GM, turning one of their soon-to-be closed facilities into the Great Lakes Technology Center, saving and bringing jobs to Flint. This wasn’t enough – Collier lost the 1991 election.

Despite all that has happened in the past two decades (‘70s, & ‘80s), Flint owes a lot to the auto industry and, particularly, the people who grew GM while caring for the city. The very first Sit-Down Strike monument was built in 1987 along the banks of the river by Johan Sellenraad. The monument was not built to withstand the winter weather and was quickly destroyed; but in 1988, a statue of ol’ Billy Durant was created by Derek Wernher at the carriage factory where it all began. Cast in bronze, the statue still stands proudly. In the next year, a different sort of monument to Flint would be created and released that greatly affected the nation’s perception of the city and its relationship with GM.

In 1989, Michael Moore released “Roger & Me” a documentary film portraying the impact of Roger Smith’s decision to close plants in Flint during the decade. Mayor Matt Collier and the majority of Flint residents did not like the portrayal of the city; but the documentary had a profound effect, nevertheless. It was a monument to the type of change that job loss, through automation or outsourcing, could bring to an area dependent upon a main industry for survival. The film won multiple awards for best documentary that year.

As the ‘80s ended, city officials and citizens were left in shock. GM was leaving, jobs were scarce, crime was on the rise and tax revenue was dwindling. Many were leaving the city with hopes of finding greener pastures. Those who stayed continued on, never doubting the city or its heart – but deep down, they knew the ride was over. It was time to kick the tires and just leave the old vehicle behind. If Flint was going to succeed, it would have to do it in a new way. In the next few decades, the city would continue to be tested; but a gem of a plan was beginning to be unearthed. 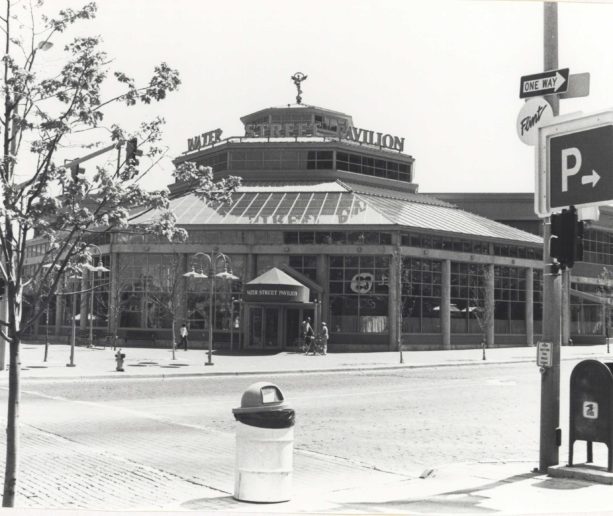