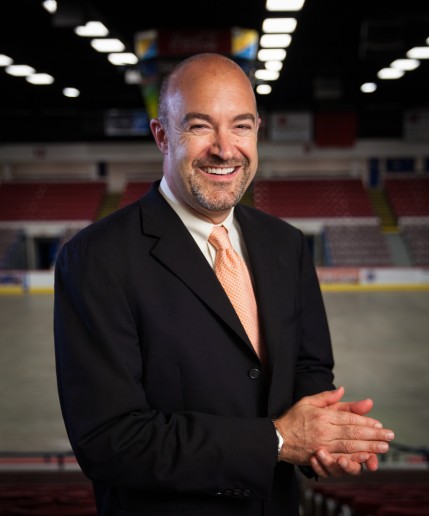 What do Hockey Hall of Famers Wayne Gretzky, Bobby Orr, Steve Yzerman and Brendan Shanahan all have in common?

Other than being four of most talented players to ever lace up skates, they are just a few of the hundreds whose last stop before the NHL was the Ontario Hockey League. In fact, roughly 20 percent of players on current NHL rosters are OHL alumni, including Detroit Red Wings Petr Mrázek, Jakub Kindl and Kyle Quincey.

This month, the league that has spawned so much NHL talent will debut in Flint when the Firebirds take the ice for the first time, concluding a whirlwind process that began last December when the IMS Hockey Group purchased what was then known as Perani Arena before announcing a short time later the purchase and relocation of the OHL’s Plymouth Whalers franchise to Flint. In early August, IMS announced that Perani’s Hockey World is the Firebirds’ official presenting sponsor.

“I would describe things right now as organized chaos,” laughed Firebirds President, Costa Papista, in August amid preparations to begin the season with the September 3 Blue & White scrimmage at the Polar Palace in Lapeer. “We have a lot of tight deadlines that we’re trying to meet and little room for error, but this is such an exciting time for everybody in the entire organization. The community has really gotten behind our efforts to bring top-quality hockey back to Flint.”

Among a lengthy list of things that have kept Papista and his staff busy are a number of privately-financed renovations to the 4,021-seat arena which was renamed Dort Federal Credit Union Event Center in July. Roughly 5,000 square feet of the facility was being renovated, including an all-new locker room with a players’ lounge, stadium seating video room, coaches’ offices, equipment and trainer’s rooms along with a new weight room, media suite and upgraded visitor’s locker room. Repairs were also being made to the parking lot surface and exterior lighting.

A larger exterior sign was installed along I-69 and an HD video board including a seven-camera production with instant replays. It is scheduled to be completed in time for the first home game on September 26 against the Saginaw Spirit.

Ironically, Papista, a pro hockey veteran, also oversaw the Spirit’s move from North Bay, Ontario to Saginaw in 2002. “Seeing all the improvements has been really exciting and we can’t wait for people to see the results,” says Papista, a Grosse Pointe native who played for OHL teams in Sudbury and London, Ontario in the 1980s. “The bigger, brighter sign is a great thing to get our message to the 89,000 cars that pass by the arena each day, and all the work we are doing to the interior will no doubt make a good first impression on visiting fans and players, especially the new scoreboard. There is no doubt The Dort Federal Event Center will be known as a first-class facility, which gives players and fans alike a great hockey experience.”

A refurbished arena is just one reason why people should attend the Firebirds games.

“For anyone wishing to watch young, top-level and talented hockey players who could very well be in the NHL one day, this is the most affordable way to do that with ticket prices as low as $12,” Papista says. “We should come close to our goal of 1,500 season tickets sold. Beyond hockey, it’s a great community event – like a minor league baseball game under a roof with all the benefits that come with it. We will have activities that make attending the games a great experience for the entire family.”

If brisk ticket sales for the team’s home opener are any indication, the community is getting the message. Tickets went on sale at 10am on August 7, and the team soon posted a picture on its Twitter feed of a long line of waiting fans. “Opening night tickets are on sale now and we have a line out the door. Fans began to line up at 4:30am,” the club tweeted before later tweeting that only 300 tickets remained.

Papista was the impetus that brought Firebirds owner Rolf Nilsen and former Whalers owner Peter Karmanos together, setting in motion the process of the OHL coming to Flint. A former general manager and president of minor league teams in Port Huron and Dayton, Ohio as well as the Spirit, Papista began a sports consulting business in 2009. 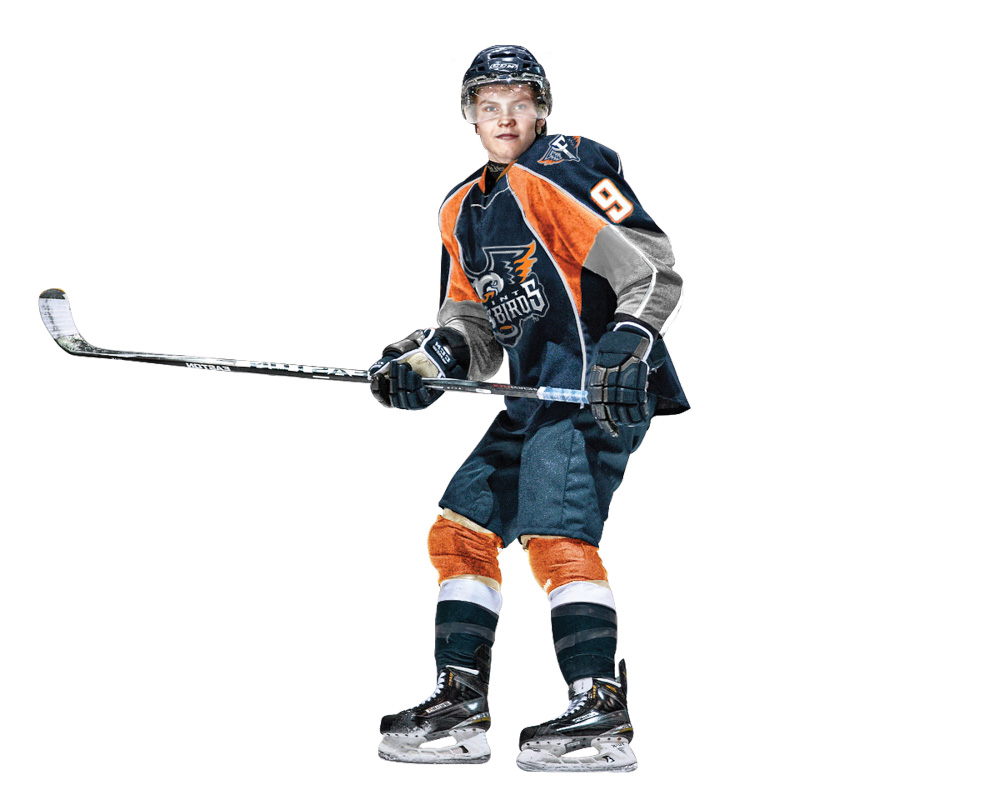 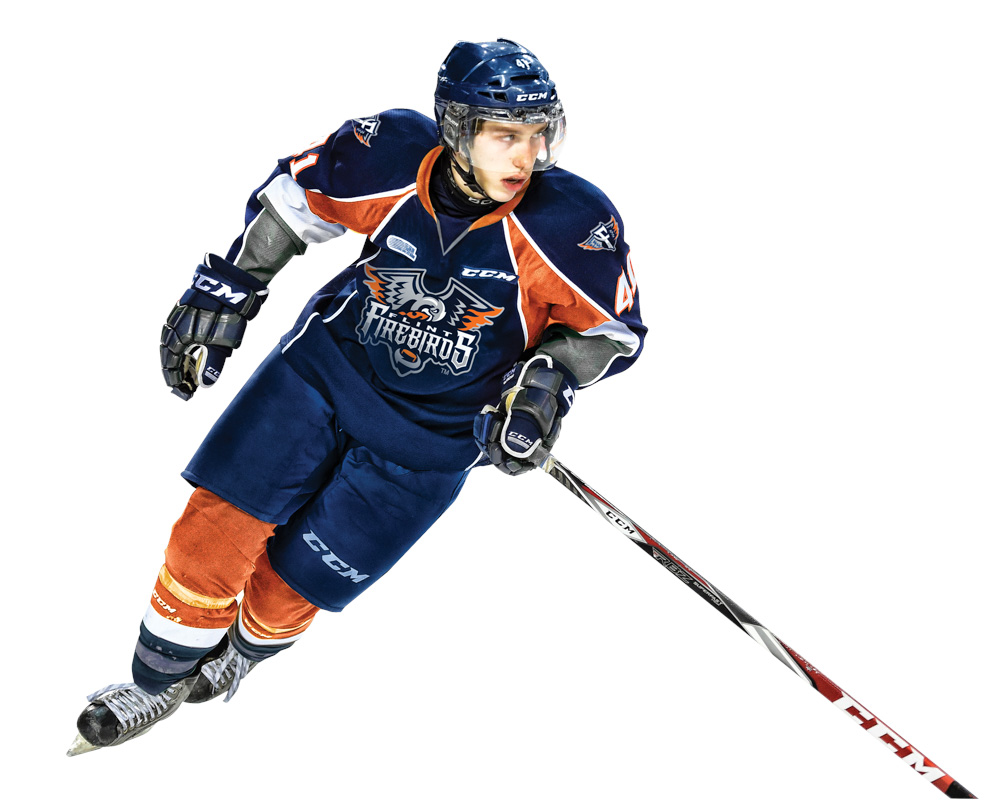 Late last year, Nilsen began the process of purchasing Perani Arena and hoped to bring a United States Hockey League team to Flint while Karmanos was looking to sell Compuware Arena, as well as relocate and possibly sell the Whalers, a franchise he launched in 1990.

Conveniently, both men became Papista’s clients. “At almost the same time, I was helping Rolf find a market with an arena he could purchase and bring a hockey team to, and also helping Peter with the relocation of his OHL team,” recalls Papista, who agreed to work full-time for Nilsen after the sale of Perani was completed in December. “Initially, Rolf was looking to bring an USHL team to Flint and Peter wanted to move the Whalers to Chatham, Ontario. Rolf was also very interested in the OHL for Flint and Genesee County and I suggested to Peter that maybe the best thing would be to sell the team to Rolf. They agreed and everything worked out great for all parties involved – especially the greater Flint community.”

On January 14, the sale and relocation of the Whalers was announced. “I was originally thinking about a team from the USHL, but I learned about the Whalers and the league they were in and made my decision to purchase this team instead,” Nilsen said. “I think that the OHL is the best player development league in the world for this age group [16-20 years old], and it quickly became evident that I wanted to be a part of this opportunity that has great potential to become phenomenal. Flint is a staple in the hockey world and has a very long history with youth and professional teams. This community and town supporting the Firebirds and the league will be a great honor.” Nilsen is owner of the Cape Coral, Florida-based IMS USA, Inc., a leading manufacturer of watertight doors.

By the end of March, the team’s new name was revealed while Terry Christensen, who has coached at the college and pro levels for three decades, was named general manager; John Gruden was named head coach and Dave Karpa an assistant coach. Gruden and Karpa are NHL veterans. It was also announced that Assistant General Manager Joe Stefan and Scouting Director Dave McParlan, who worked for the Whalers, would remain.

“Terry is a great recruiter of talent who has worked with some of the best coaches in game like [former Michigan State coach]Ron Mason and has made a big impact on every organization he’s been with,” Papista says. “John played at the highest level and has done a great job coaching and developing young talent the past four years with USA Hockey. We felt he was the perfect choice.”

The team felt “Firebirds” was the perfect choice for a name following a contest which generated 5,000 online entries and about 2,000 unique suggestions. “We wanted something symbolizing Flint’s determination to come back from tough economic times and other troubles. We originally wanted to go with ‘Phoenix’ to symbolize a rise from the ashes, but it’s the same name as a Quebec Major Junior Hockey League team, so we decided Firebirds would work very well, too,” Papista explains.

Gruden, who has also coached the Rochester Stoney Creek and Birmingham Brother Rice high school teams, was an All-American at Ferris State before a ten-year pro career that included 92 NHL games. He is the one directly tasked with turning around a team that finished 23-38-5 last season and missed the OHL playoffs for the first time in 24 years.

“I have paid my dues and I’m really excited to be a head coach at this level,” Gruden says. “I’ll know more when pre-season camp begins; but overall, we’ll stress the importance of working together for a common goal like making the playoffs, being good teammates and taking care of things we can control. I want other teams to feel they have their work cut out for them when they face us.”

Wesley, the son of former NHL All-Star Glen Wesley, Saarijarvi, and Peters are defensemen while Chatham plays forward and Nedeljkovic is a two-time finalist for OHL goaltender of the year.

“The fact that four of the five NHL picks play defense or goalie is very encouraging to the coaching staff, because a strong defense is such a foundation for success,” Gruden said. “When other teams get frustrated and have a hard time scoring against you, it’s huge.”

Papista stresses that the Firebirds will also be huge for the local economy and that the community’s attachment to the team should only grow with time. “About 90 percent of our games are on weekends, which brings plenty of out-of-town fans who will be staying in hotels, eating out, shopping locally and other things,” he says. “I also think the team will develop more of a following when fans start to see former Firebirds having success in the NHL.”