Anything Guys Can Do … 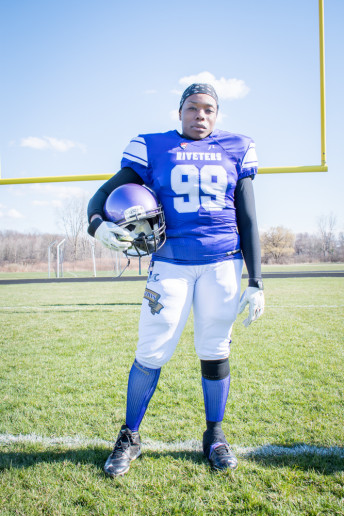 “Winning the Division 3 Championship is the ultimate goal because that would really be a positive thing for the city.”
Louise Ogadinma, Team Owner

With her trim, toned build, distinctive mohawk hairstyle and confident stare, Louise Ogadinma looks nothing like she did a decade ago. Back then, as she puts it, she was an “unathletic” senior at Detroit Renaissance High School whose only extra-circular interest was choir.

Ogadinma was also continuing a long struggle with her weight which lasted until about five years ago, when the issue began interfering with her ability to earn a living. Her physical job at the Ford Motor Company’s Wayne Assembly plant left her exhausted. Soon, she required a back brace to perform her duties.

That was the final straw.

“I had been overweight my whole life, but it really started causing problems when I started working full-time at the Ford plant,” Ogadinma recalls. “I was tired all the time, and when I had to start wearing the back brace at age 24, that was just embarrassing. I thought, ‘I am just too young to be walking around with a back brace.’ It was time to make changes.”

She didn’t just change, she began transforming from someone with little interest in sports to one of the top offensive tackles in the 65-team Women’s Football Alliance, North America’s largest full-contact league of its kind. Yes, the one-time choir girl now battles in the trenches on the gridiron as a player and owner of the Flint City Riveters, which she helped found three years ago after spending a season with another WFA team, the Detroit Pride.

“I was feeling confident after having gone through a weight loss transformation and was like, ‘why not try a sport now?’,” said Ogadinma, who was named a third-team Division 3 All-American by the WFA last season. “I saw a Facebook post about tryouts for the Detroit Pride and just went for it. I found how plays are designed and executed to be really interesting, and I love playing offensive tackle because I like blocking the other players out of the way. It’s been really fun.”

Before the fun, however, she began taking advantage of the Wayne Assembly Plant’s employee gym, changed her diet and dropped 70 pounds in just 13 months. A year later, she joined the Pride. After just a single season, Ogadinma had become so passionate about women’s football that she and two teammates decided to form their own team.

Despite living in Wayne County, the trio decided Flint would be an ideal place to expand the WFA, which celebrated its 10th anniversary this year. They raised the $2,000 franchise fee and began advertising for players in early 2016. 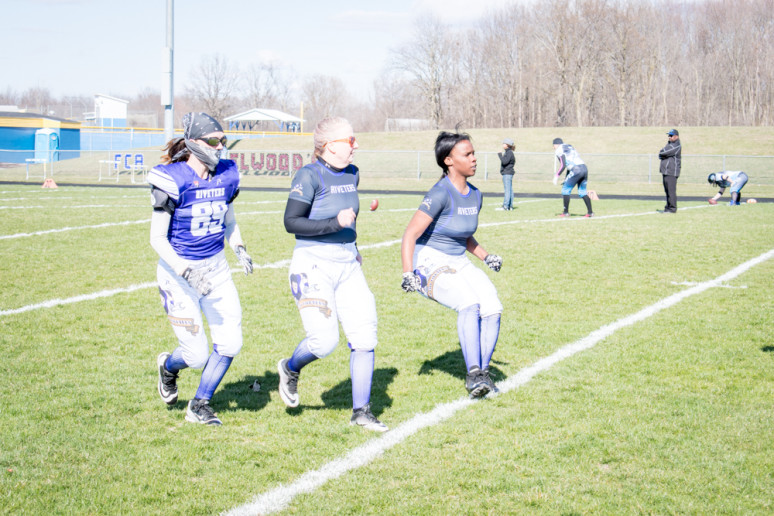 “There was always some kind of negativity surrounding Flint and the water crisis hit at the time we were forming the team,” said the owner, who lives in Melvindale. “We just wanted to bring something positive to the city and expand the league. The people who started the team with me have moved on, but I’ve stuck with it because I love women’s football and what we are doing in Flint.”

Ogadinma’s weight loss journey also inspired her to become a certified personal trainer to help others achieve similar goals. She also works part-time as a fitness coach at Downriver Family YMCA in Southgate and is raising a nine-year-old daughter. All of that, coupled with driving 75 miles one way to play for and oversee a football team, means her life is a constant juggling act, but she wouldn’t have it any other way.

“Of course, my schedule is challenging and sometimes overwhelming, but I believe in what we are doing,” she said. “I’m always doing everything possible to promote the team with social media ads, flyers and business cards and organizing community activities. It’s easy to forget things with so much going on.”

WFA games mostly follow college football rules, but official the game balls (Spalding youth composite) are smaller. “People who come to see us play can expect a well-played, entertaining game because we play hard and hit hard just like the men,” Ogadinma said. “We have players from all over (Saginaw, Bay City, Clio, Troy) coming to join us, because they really like the competitive atmosphere. They also appreciate the social aspect of it and friendships they form. The importance we place on community involvement is also something that attracts players.”

The Riveters have played a role in Communities First Inc.’s Movies Under the Stars event, spruced up an abandoned home along the Crim Festival of Races route, participated in the Pack Your Back event providing school supplies to kids, volunteered at the Warrior Dash race and NFL player Brandon Carr’s youth football camp, and even aided the Red Cross during the peak of the Flint Water Crisis. “Those things are a win-win for us,” Ogadinma said. “We can take part in worthy causes we believe in and promote the team at the same time.” 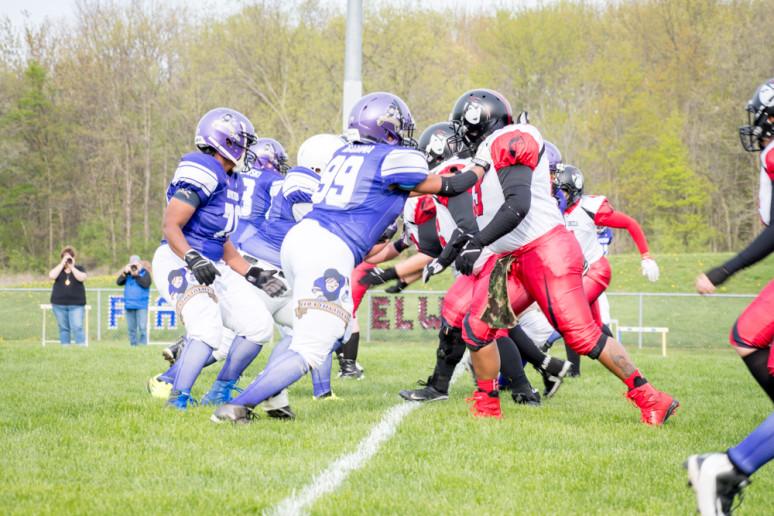 WFA teams are divided into three divisions based on roster size. The Riveters are a Division 3 squad (maximum 25 players) and finished the 2017 season tied for fourth place in the National Conference’s Northeast Division with a 3-5 record after going winless in their inaugural season. While the Riveters were slightly outscored by an average margin of 20.5-17 points per game, only six of 23 Division 3 teams scored more total points than their 136.

The Riveters were far more competitive than in 2016 when they finished 0-8, including having to forfeit a game due to lack of players, and were outscored 292-19. They were also forced to play home games at Vassar High School after not being able to secure a host field in the Flint area. Last season, the Riveters played at Burton, Atherton and Montrose high schools, drawing between 100-300 fans for most home games.

“Last season was much better because we had 23 players most games and played more as a unit,” Ogadinma said. The team is playing at Kearsley High School this season. That was made possible through the efforts of Kearsley football announcer, Fernando Amaya, who will also call Riveters’ games.

“I feel having the Riveters at Kearsley will give our girls and other girls in Flint and Genesee County a great opportunity to do something other areas can’t; to compete like the guys in a sport that I love,’ Amaya says.

Unfortunately, the roster has shrunk to 19 players, so far this year, and the Riveters opened the season with a 45-0 loss to the Columbus Vanguards. 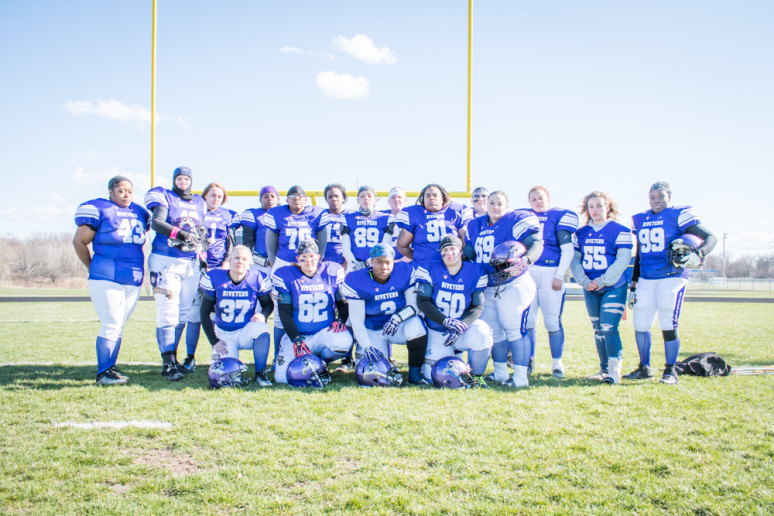 The only other returning players are lineman Danniale Hale, who had 12 tackles, two fumble recoveries and blocked a kick last year, and Patricia Youngblood, who takes over as quarterback. Youngblood, in her fourth season in the league and third with the Riveters, was a tight end last year and played some defense, finishing with four tackles and a fumble recovery. She also serves as Swartz Creek High School’s girls junior varsity basketball coach, and a coach in Swartz Creek’s boys youth football league.

“I would love to see us go the Division 3 playoffs this season,” Ogadinma said. “Winning the Division 3 Championship is the ultimate goal because that would really be a positive thing for the city.” 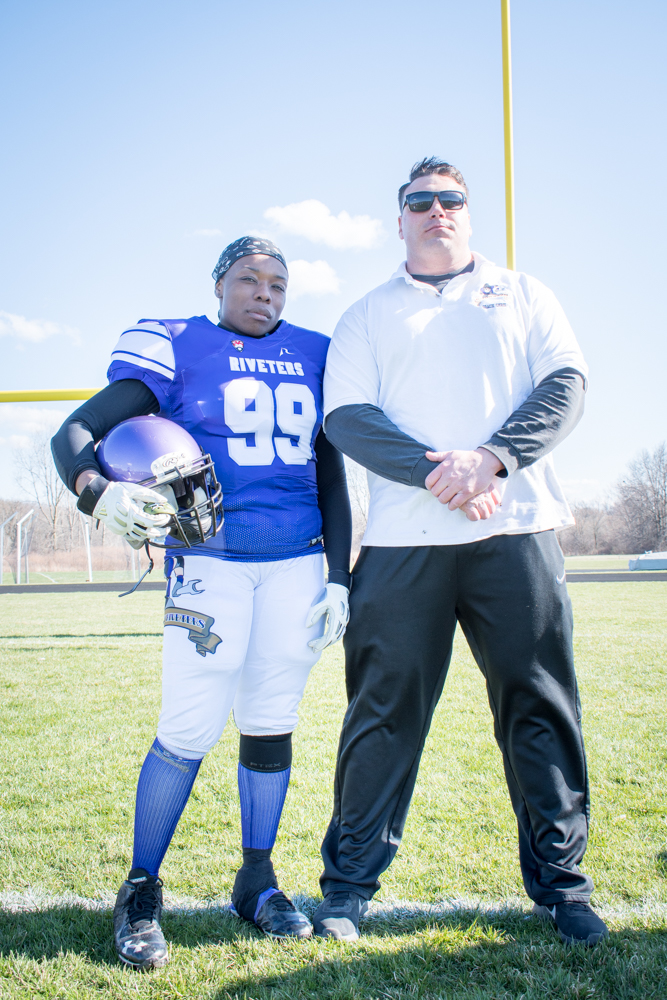 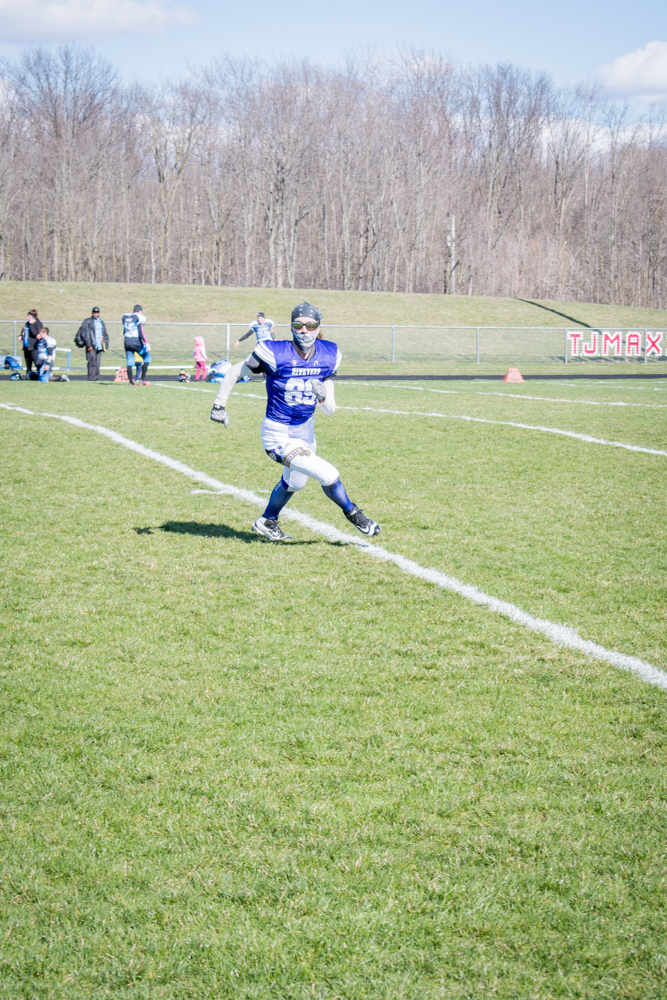 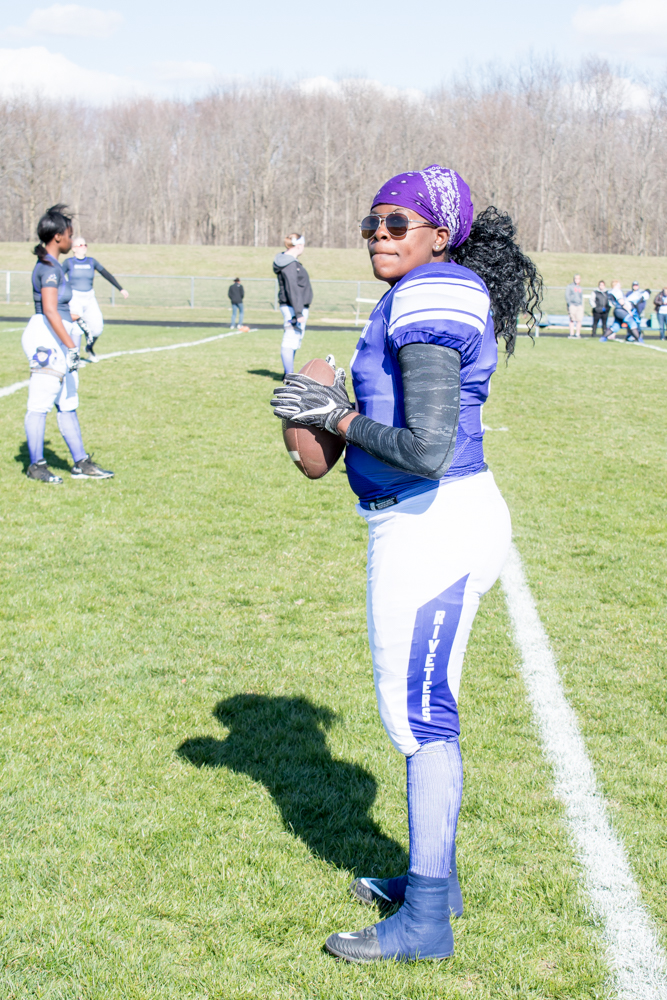 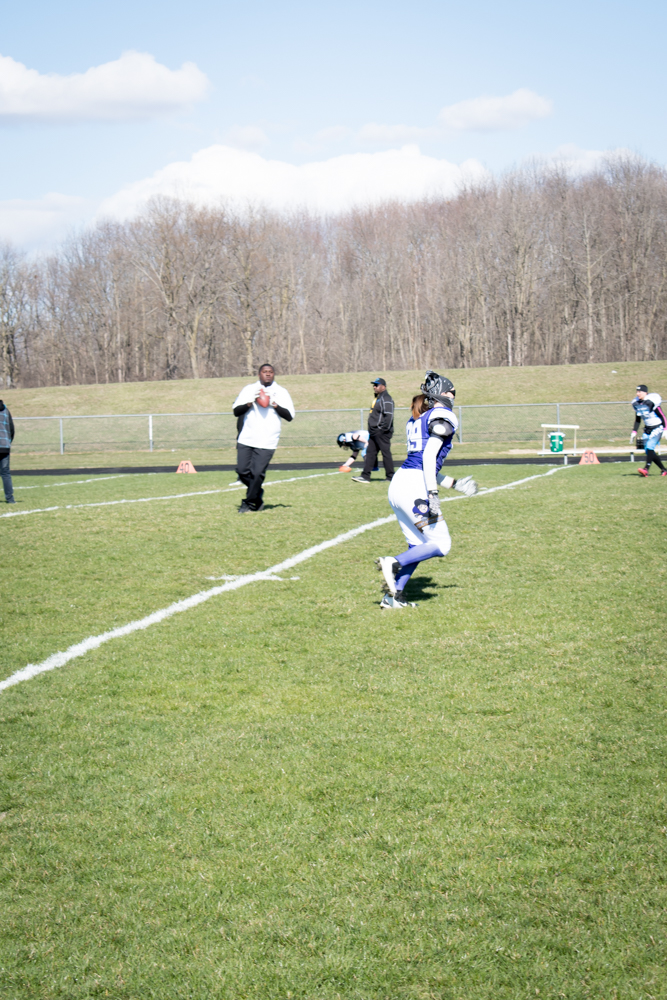 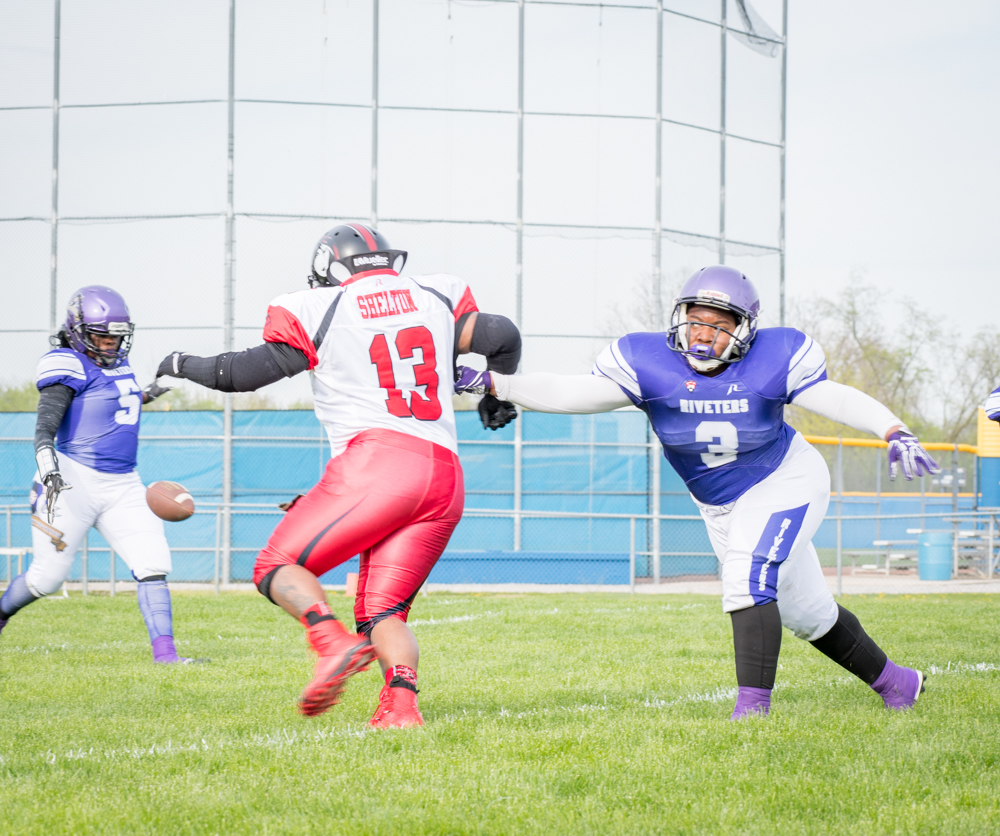 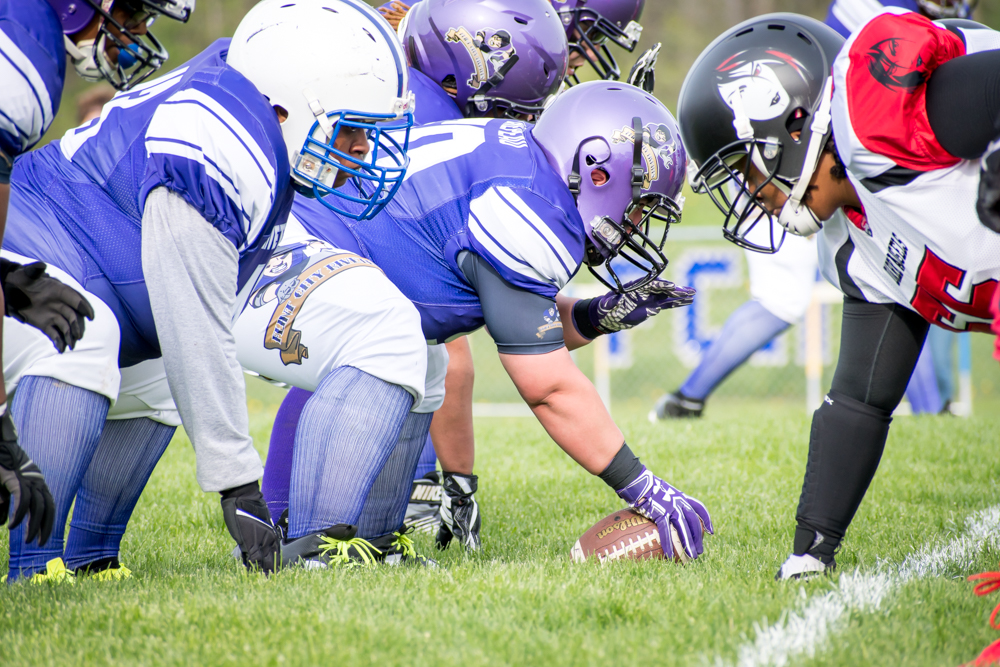 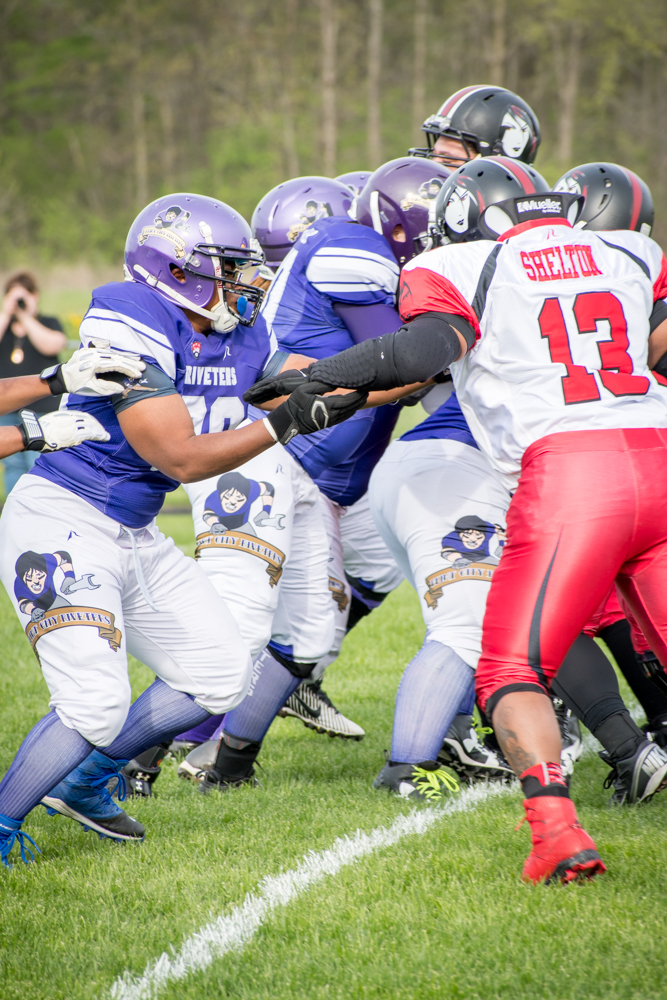 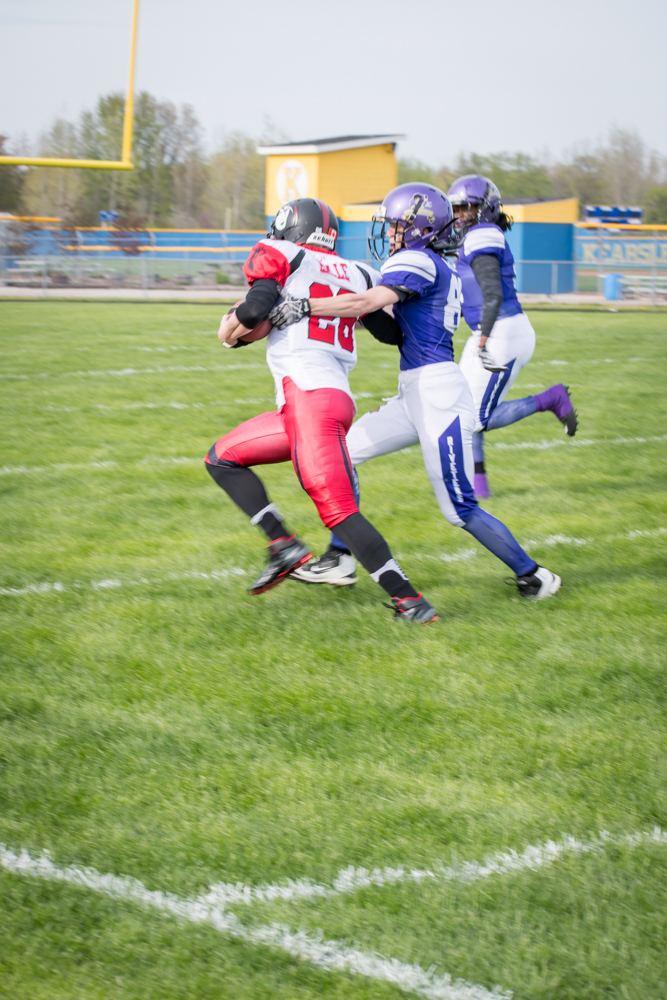