The lowest point of Nic Matiere-Bey’s life is forever etched in his memory, a measuring stick of how far he has come.

During a 2018 gathering of roughly ten people, including some family members, Matiere-Bey was two years removed from seeing his pursuit of higher education and a promising college football career grind to a halt after substandard academic performance forced him to withdraw from Ferris State University and return to Flint.

By then the father of two young girls, Matiere-Bey admits he had lost his way and been pulled back into what he calls, “that Flint life.” 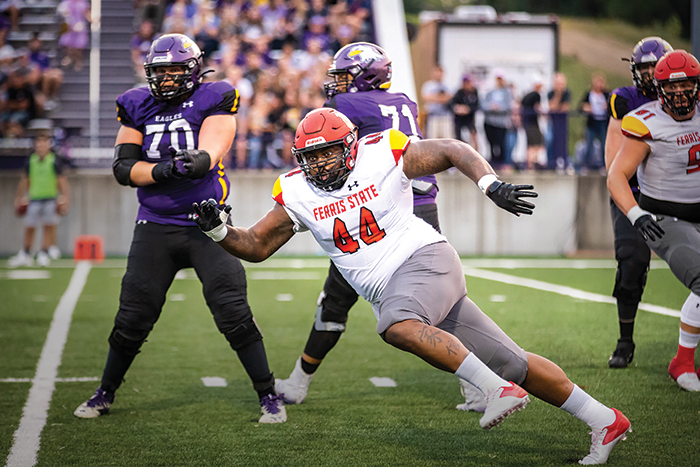 “Still, we were all just hanging out, having a good time that (2018) night, when a cousin I considered one of my best friends had been drinking and starts yelling at one of our female cousins about something,” he recalls.

Matiere-Bey felt compelled to intervene and attempt to de-escalate the situation. That only led to the man, significantly smaller than the 6-foot-3, 285-pound Matiere-Bey, shoving him, but Matiere-Bey felt he could still calm down.

The situation only grew more heated.

“I kept telling him ‘let’s just relax’, but he would not let it go,” he says. “I finally end up shoving him back hard and he tells him he has something for me.”

Matiere-Bey knew that something was a gun.

“I knew that’s when I had to get out of there, took off running, made it about three or four blocks and tried to hide but he found me,” he says.

A frightened Matiere-Bey watched someone he had once trusted pull the weapon.

“I was begging for my life, telling him I have kids to take care of and not to shoot,” he recalls.

The man didn’t pull the trigger, but pistol-whipped Matiere-Bey in the head before leaving the scene. He required six stitches to his scalp.

The incident forced Matiere-Bey to take a long look at where his life was headed. He had to change its direction.

The next day, he signed up for classes at Mott Community College as a first step toward returning to Ferris and the sport that is his passion.

Matiere-Bey also excelled that semester at Mott, leaving his academic struggles behind, with a 3.7 grade point average. That, combined with a 3.3 in a summer math class, and Matiere-Bey was in good enough academic standing to re-enroll at Ferris.

I was begging for my life, telling him I have kids to take care of and not to shoot.”

In the fall of 2019, he returned to the campus that had felt like a second home with an eye toward playing football again in 2020 until the global coronavirus pandemic led to the cancellation of that season.

“Having to take the COVID year was actually a good thing because it allowed more time for me to really get my body in shape to play again – really running and lifting – and figure out what job I could still work during the season to take care of my kids,” he says.

At last, on September 2, 2021, nearly five years after his last college football game, a now-25-year-old Matiere-Bey suited up for Ferris’ season-opener against the University of Findlay. He finished with four tackles as the Bulldogs blasted Findlay, 54-14.

“It just felt so good to be out on the field again, like the most normal thing ever, what I was meant to do,” Matiere-Bey says. “I didn’t feel too rusty, just amazing. Playing football again was the breath of fresh air I felt I could not get anywhere else.”

Matiere-Bey helped the Bulldogs bulldoze through opponent after opponent last season which culminated in the program’s first Division II National Championship. Ferris actually trailed, 17-14, in the title game in McKinney, TX against Valdosta State before reeling off 44 unanswered points for a 58-17 trouncing.

Before kickoff, emotions flooded over Matiere-Bey as he reflected on all he had endured and overcome to experience the moment, including an extremely challenging schedule of work, football, classes and fatherhood during the season.

“I could feel myself starting to cry, taking everything in before the game,” he says. “I had never played in a championship game like this before, had never even been to Texas before. Now, here I was, one of our captains heading out for the coin toss before the game, about to play in such a huge game with my boys.”

In the first half, Matiere-Bey made three tackles before cracking a couple of ribs and missing the remainder of the game.

“I felt awful being on the sideline and the waterworks came back, but (my teammates) snapped me out of it,” he says. “They were like, ‘Bro, you did all you could do’. Let us finish it off. The game was still close, but at that moment it felt like we were going to win, for sure. We took off from there.”

The Bulldogs took off and completed an unbeaten (14-0) season during which they outscored foes by an average margin of 47-18 points per game.

Matiere-Bey, who had held tight to the hope of returning to football, was now alternating between holding his children, then five and two years of age, and the national championship trophy. 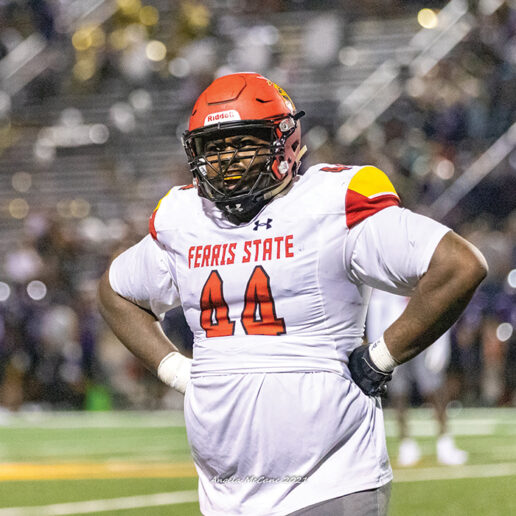 Nic Matiere-Bey anchored the Ferris State defensive line during the run to their first Division II National title in 2021.

“I get so emotional every time I look at pictures from that day, especially with my girls being able to be there, the red and yellow confetti coming down and the journey it took to get there,” he says. “Seeing (head) coach (Tony) Annese’s face light up and coach Hodges (Defensive Coordinator Ryan Hodges) celebrating after getting us there. It felt so perfect.”

Perhaps nobody was more thrilled for him than Hodges, a former Montrose High School standout, who had kept in touch with Matiere-Bey and encouraged him during his years away from the program.

During his comeback season, he contributed 24 tackles, including three for loss, and recovered a fumble.

“Nic was extremely important to our success,” Hodges says. “He was very physical and quick for an interior defensive lineman. And, of course, he is a tremendous motivator for his teammates.”

How could anyone not be motivated by Matiere-Bey’s encouraging nature and ability to deftly handle such a crazy schedule during that season?

In addition to all that being part of a powerhouse football program entails, he attended classes on Monday, Tuesday and Thursday and two more online, while working full-time as a Planet Fitness trainer and always making time for his children.

For example, a typical Wednesday, Matiere-Bey said, entailed a 6am workout, 7am weight-training, 8am football meeting, work from 9-11 am, practice from 11am-1pm, back to work from 2-10pm and then, finally, back home for time with his kids.

“They were not in school yet, so they could stay up sometimes until 1am, so we could spend time together,” he says. “Then, I’d get a little sleep and start over again at 6am the next day. Emotionally, I honestly can’t tell how I managed to juggle all that.”

Last spring, Matiere-Bey graduated from Ferris with a bachelor’s degree in criminal justice before returning to the football program as a graduate assistant coach for the defensive line this fall. He was six credits shy of an associate degree in integrated studies and taking those classes made him eligible to become a graduate assistant.

On December 16, Matiere-Bey and the Bulldogs were back in McKinney to defend their national title, this time against a potent Colorado School of Mines squad, averaging nearly 47 points and 162 rushing yards per game.

Not so against Ferris, as the linemen Matiere-Bey helped coach spearheaded an astounding defensive performance which limited CSM to a mere four net yards rushing and sacked dangerous quarterback John Matocha six times as the Bulldogs rolled to a 41-14 national championship repeat.

“On the sideline, it was a great experience to watch the guys I worked with practice their craft,” said Matiere-Bey, who earned his associate degree the same week. “It was such a pleasure helping teach those guys and motivate them all season. They did what they had to do to dominate. It was just as emotional to win a national title as a coach.” 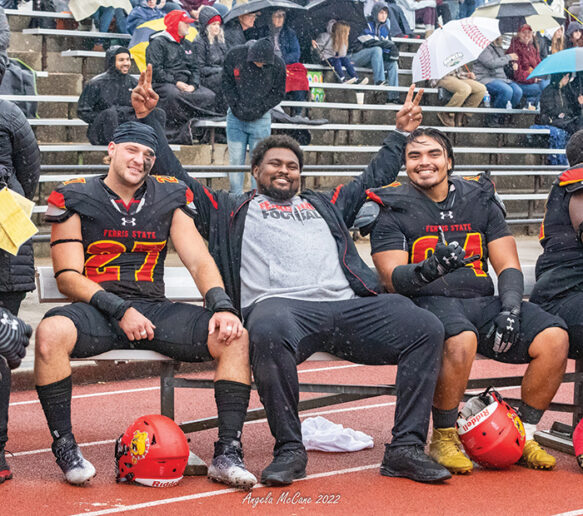 Matiere-Bey was indeed emotional as the game ended, first embracing Shaderrick Bradford, one of the linemen he had played alongside and was now coaching, and then hoisting quarterback Mylick Mitchell into the air.

Among those thankful he stuck around for another season with the team was defensive line coach Tesfa Smith.

“Nic was such a valuable asset because he bridged that gap between the older coaches and younger players and helped them see we always have their best interests in mind,” Smith says. “Guys listened to him because of how he played the game and how he related to them and for him to have that instant credibility with players really helped the other coaches. As a player, Nic was a great technician and super talent and he was able to teach the techniques and fundamentals that helped him excel to others.”

Matiere-Bey became most emotional, however, celebrating with defensive lineman Deron Irving-Bey, his cousin and fellow former Southwestern standout. Their college football journeys were similar as Irving-Bey was part of Michigan’s 2017 recruiting class before transferring to Central Michigan and eventually leaving school and welcoming a child.

He relaunched his career at Ferris this season and was the only Genesee County player to participate in this year’s national championship. Irving-Bey did not register any statistics, but contributed 29 tackles in nine games throughout the season.

“That meant everything to me and Deron was the only one I cried with this time,”says Matiere-Bey who has Irving-Bey’s name tattooed on his skin. “We’ve always been close. It seems like just yesterday we were playing football in front of our grandmother’s house on Hamilton Avenue in Flint. We’ve both shown we can go through things and finish strong.”

It was such a pleasure helping teach those guys and motivate them all season. It was just as emotional to win a national title as a coach.”

Irving-Bey was inspired by watching his older cousin turn an all-state senior season at Southwestern (66 tackles, 14 sacks) into an offer from Austin Peay.

Matiere-Bey made an immediate impact at Austin Peay with 66 tackles, including 13 for loss, in 23 games his first two seasons. When he became uncomfortable with a change in head coaches, he returned to Michigan and the school he originally committed to while in high school – Ferris State.

He wasted little time making an impact in his first season with the Bulldogs in 2016, finishing fifth on the team in total tackles (58) and fourth in tackles for loss (10) and sacks (three) in 15 games as Ferris reached the national semifinals.

He has a lot of love and passion for the game and for helping young men grow into successful people.”

Last month, Matiere-Bey was preparing to leave Big Rapids and rejoin his children and their mother in Flint.

“This season was certainly more difficult because they were home in Flint going to school,” he says. “I’m looking forward to being with the kids all the time and giving their mom a break.” 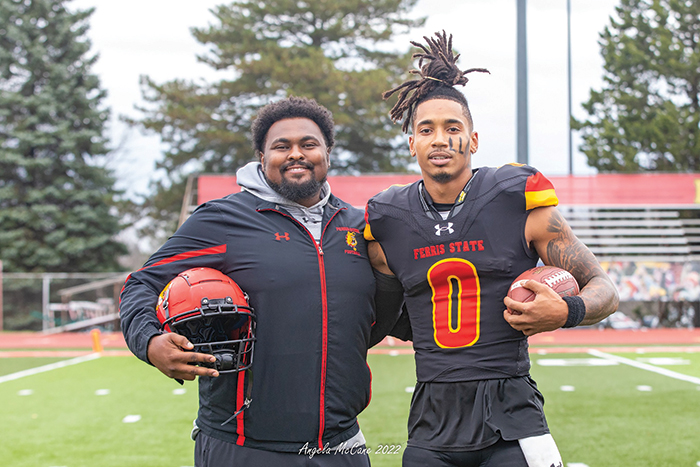 Matiere-Bey said he will be working as a juvenile behavior specialist as well as with young athletes at 475 Elite Training.

Still, he is not ruling out resuming his playing career in places like the United States Football League, Arena League or XFL.

Matiere-Bey adds coaching is also likely in his future, something Coach Ryan Hodges would love to see.

“Nic is an energetic and motivational coach who has the ability to keep it real with the players and they respect him,” Hodges says. “He has a lot of love and passion for the game and for helping young men grow into successful people.”