Sam and Enaya Jawhari are well-known for the delicious food they prepare and serve at Beirut Restaurant & Grocery located in the Flint Farmers’ Market, where they greet their customers with warm smiles. Having celebrated 20 years of marriage last November, they still share a deep and profound love for each other and for their family.

Born in Lebanon, Sam moved to the U.S. with his parents and siblings at a young age. It took a little while for him to find his true love, and life threw him a few curve balls along the way. He was married previously, but it didn’t last. He then had a relationship with a woman and they had a beautiful daughter named Briona. When Sam had first met Briona’s mother, she told him she had been in prison for drugs, but didn’t use anymore. Before long, he discovered that she was using drugs again. He did his best to make sure Briona was taken care of, and there came a time when Briona’s mother would not let Sam see his daughter unless he gave her money. He realized that he needed to find a wife – a partner – someone he could count on. 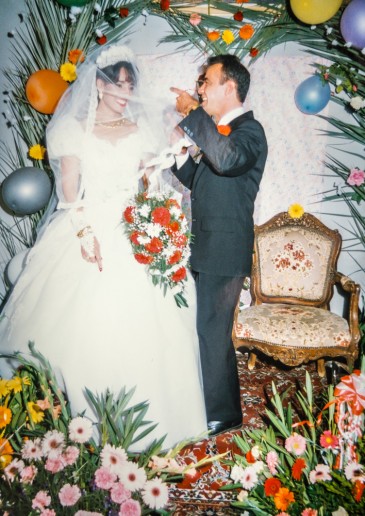 Sam had told his father, “Dad, I need to get married.” His father asked, “Why don’t you look to your culture?” Sam thought it was a good idea, so, they traveled together to Lebanon to visit relatives. After about three weeks, Sam hadn’t met anyone. “At that point, I told my dad I was ready to give up on the idea,” he says.

In Lebanon, there were ten families who lived near each other and all shared a gathering area where special occasions were celebrated. One night during their stay, Sam attended an engagement party at his father’s suggestion. Engagements are celebrated with a big party where guests bring gifts of jewelry for the bride-to-be, and they enjoy food and drink and lots of dancing. The party was attended by about 300 people. “Then, I saw her [Enaya],” Sam remembers. “She was dancing with another guy, but all I saw was a spotlight on her.” Sam was urged by a cousin to talk to her, and he later told his dad, “The girl who has the key to my heart is here tonight.”

Enaya believes it was destiny. “That Saturday night, I was sick, but my brother made me go the party,” she says. “I was meant to be there.” Sam adds, “I was like a kid with a schoolboy crush.” 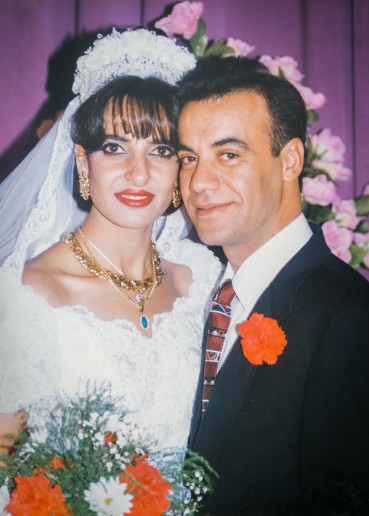 The two spent time getting to know each other and on Sunday, Sam visited Enaya’s parents, who had known him when he was young. Enaya and Sam then spent Monday evening talking about their future. “I want to marry you,” he told her, “and you have until Friday to decide.” “What?!” she exclaimed. “Love will come in time,” he promised, knowing that they were infatuated with each other. “And I will treat you well.” That Wednesday, Enaya gave Sam the answer he wanted to hear: “Yes!”

As he drove home that night, estactic, Sam heard a song on the radio: “I Finally Found Someone,” by Bryan Adams. “I felt like the universe had spoken to me, he remembers,” “I really had found the one.”

“I knew I could trust Sam,” Enaya says. “He made me feel safe and that I could be myself with him. So, I didn’t think about it. I loved his parents, and I knew I was going to be okay.” 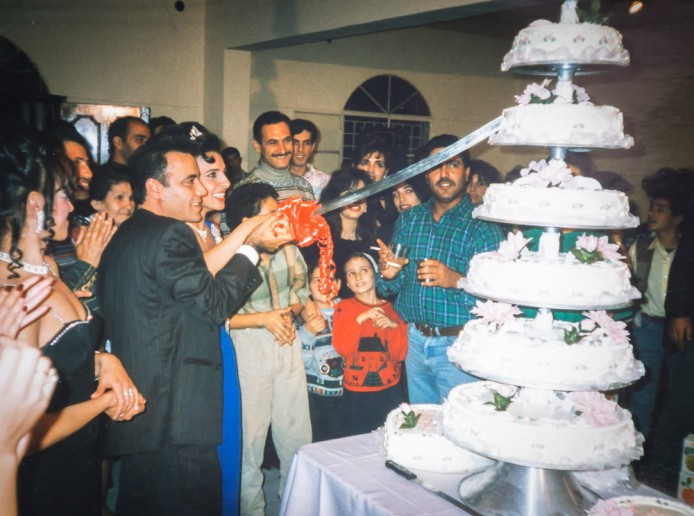 The couple hurried to make arrangements to be married and return to the United States. They went to the Justice of the Peace for a marriage certificate and traveled to Syria to obtain a visa, as there wasn’t a Lebanese embassy. When she applied for her visa, Enaya was told it was all set and she was to return to the embassy in three months. Sam tried to explain to the authorities, “I’m American. We can’t wait three months.” So, the couple was told to apply for a visa at the embassy in Cyprus, because it would take less time. Sam called the taskforce first and explained his situation; that he didn’t want to leave his wife behind in Lebanon. They told him the visa would be ready in ten days. 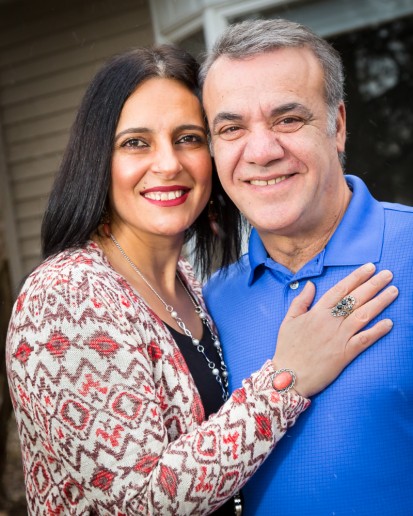 The wedding preparations in Lebanon were done in just two days. “Our families did everything!” exclaims Enaya. “There was an eight-layer wedding cake and 400 people in attendance. The whole town was there.” For their wedding song, the couple chose Bryan Adams’ “I Finally Found Someone.”

Two days later, the newlyweds were home in Michigan. When she arrived in the U.S., Enaya was shy and spoke very little English. The couple moved in with Sam’s parents in Fenton for a while, warmly taken in by the big Jawhari family. Enaya went to nursing school, but wanted to start a family. The couple was blessed with two sons, Raied and Ameer. Sam and Enaya soon had their own home in Fenton Township and as he predicted and promised, love did come in time. But, they’ve faced some trials in life; Sam’s sister, Randa Jawhari, disappeared in 2009, and he got through it with Enaya at his side. Two years later, she was at Sam’s side when his daughter devastatingly died at 17 from a heroin overdose on Valentine’s Day.

Today, the Jawharis remain strong together; however, Valentine’s Day is not a holiday they celebrate. “Every day is special,” says Enaya. “I love being with Sam. We laugh. We’re happy and healthy, our kids are happy. That’s enough for me.”