It’s an exciting time at Fenton Winery & Brewery – Owners Matt and Ginny Sherrow are proud to announce the grand opening of Dream Machine Distillery! The taproom now features a new small batch distillery and a breathtaking new cocktail bar serving innovative craft libations. Following a lot of dreaming and planning, a soft opening was held in early July. “We have been working on this project for over two years!” Matt exclaims. 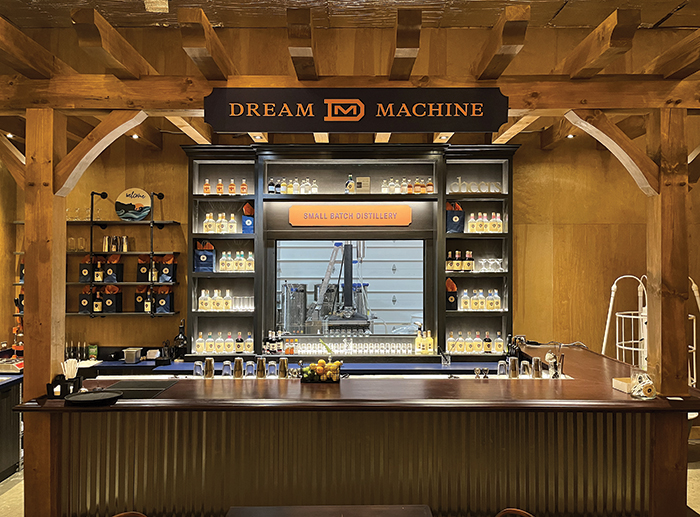 To make the spirits at FWB, the Sherrows chose equipment produced by iStill – the world’s leading craft distillery manufacturer using the latest technology and materials to create consistent, repeatable and flavorful spirits. “It’s state-of-the-art technology,” Ginny adds. For their barrel-aging program, there are twenty 30-gallon oak barrels onsite, and each can produce up to 150 bottles of brandy, rum, whiskey, bourbon and other spirits to be released in the coming months and years. 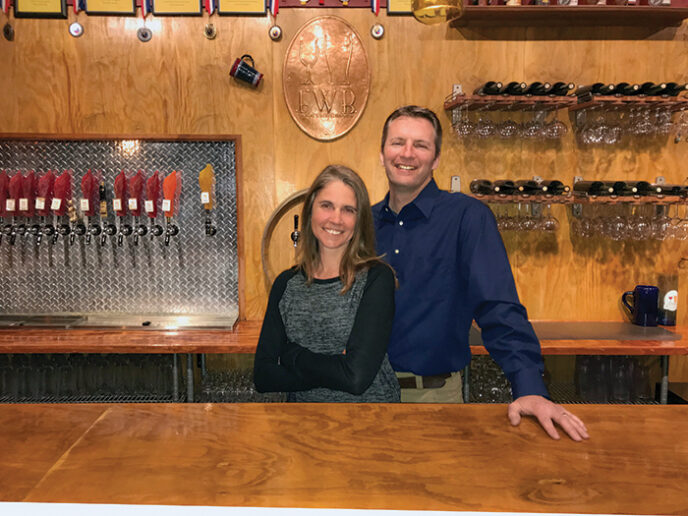 A lot of thought and care was put into creating the Dream Machine Distillery logo and branding. “We spent a lot of time researching and educating ourselves,” Ginny says, adding that they went with a professional company to design the branding and logos. “We wanted the distillery to have its own brand, one that really resonated with us,” Matt noted.

“‘Dream’ is the artistic expression of the distillery and ‘Machine’ is the scientific aspect of the name.”
Ginny Sherrow

How did Dream Machine get its name? According to Ginny, everything starts with an idea, what they call a moonshot. “Dream” is the artistic expression of the distillery and “Machine” is the scientific aspect of the name, she explains. The Dream Machine logo features a hot air balloon (the original “flying machine”), representing the simplest machine making the simplest spirits. They also have a logo featuring an airplane which will identify their aged spirits, and the Distillery’s Swiftwalker Gin was named after the first bicycle, the Swift Walker. With the names, one objective was to make people feel something and have the potential to tell a greater story. “Dream Machine is where scientific rigor and artistic expression converge,” Matt explains. “It’s where stories and spirits are only as good as the people we share them with. We engineer small-batch spirits for spirited people.” 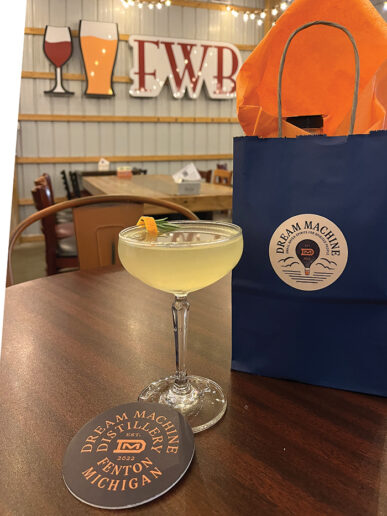 Making craft beverages at FWB is a full-time endeavor; Matt oversees a five-member production staff. “We have an outstanding team!” Ginny exclaims, “our Dream Team.” Joe Sirl, who handles sales and marketing, took the reins opening the Cocktail Bar, including creating recipes and training the service team. One of the cocktails on the menu is called Blood, Sweat & Tears: Hot Rod Gin and FWB’s zesty house-made Bloody Mary mix served over rocks and garnished with a charcuterie skewer (available Saturdays and Sundays only). Flying Solo is Btl Rckt Vodka, fresh-squeezed lemon juice, house-made rosemary syrup, Solo Blackberry Merlot and a splash of tonic. Only the freshest juices and produce are used, and many cocktail ingredients are grown onsite in their indoor and outdoor gardens or locally sourced. The creative libations were tested and approved by the team and regular FWB guests. 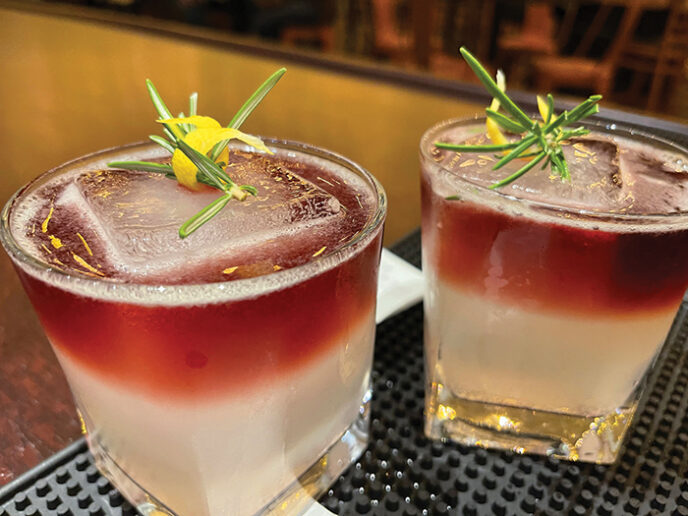 According to Matt, the first barrel-aged spirit to be released will be either brandy or rum. All barrel-aged products will feature an airplane label, representing advancement and complexity, he reports. The offerings will soon include a white (un-aged) whiskey, as well. Their first rye whiskey went into a barrel on April 7 of this year. Federal regulations require whiskies (bourbon) to be aged in an oak barrel for not less than two years. 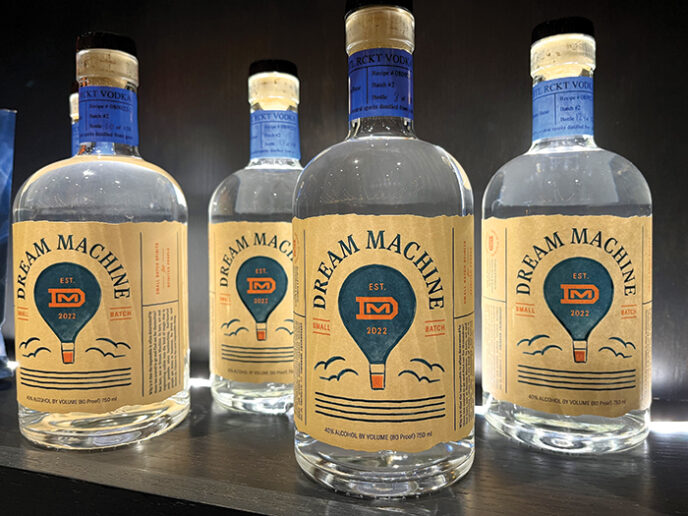 The idea for FWB came about for the Sherrows back in 2007 when the couple decided they wanted to open a business closer to their home. “It started as a crazy dream!” Ginny exclaims. And their mission was to be part of their customers’, team members’ and community’s story. Originally a small winery located on Leroy St. in the City of Fenton, it has grown to include a microbrewery and now, a distillery. The award-winning business is located in Fenton Township on North Long Lake Rd. The property includes a public taproom, a dog-friendly outdoor seating area and a separate, full-service wedding and banquet venue. “We host over 100 weddings a year!” Ginny exclaims. 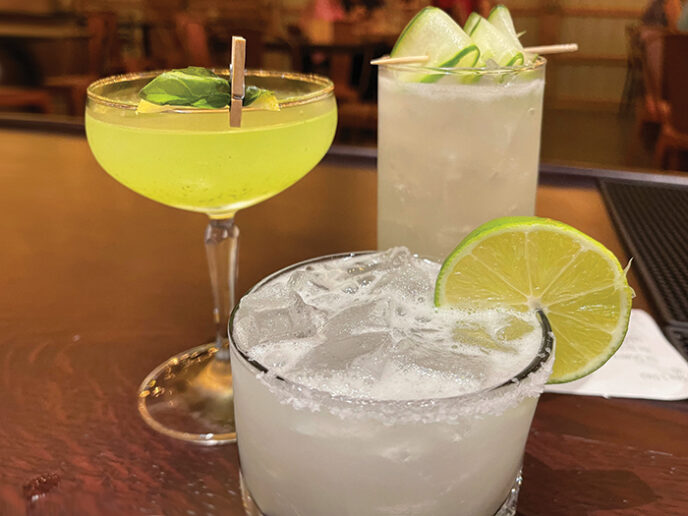 Both Ginny and Matt are very excited about the continued evolution of FWB and have enjoyed the distillery project, alluding to more “moonshots” for them in the future.  “Customers tell us stories about how they first met here and later got married,” Ginny states. “That’s why we go to work every day – we want to be a part of your story.”