It’s been a long, remarkable career. Sheriff Robert Pickell has retired after 20 years of public service to the people of Genesee County. On January 1, 1999, he replaced his predecessor, Sheriff Joe Wilson, and was re-elected to the position five times. Prior to becoming sheriff, his impressive law enforcement background includes working in the Genesee County Prosecutor’s Office as an investigator, and for the CIA from 1989 to 1995, traveling four continents and handling some very high-profile cases. He had a private investigation business working with insurance companies and attorneys until he took office.

Pickell sat down and shared his thoughts with MCM about his long and very successful career as the “People’s Sheriff,” and about this new phase of his life.

What are your thoughts about your upcoming retirement?

I loved what I did, being the “People’s Sheriff.” Most of all, I will miss my daily relationships with the public and helping them work through their problems. I am comfortable with my retirement. The time has come, it’s time to retire.

What will you remember most about your role as Genesee County Sheriff?

The sheriff is the highest elected public official and chief executive officer of the County’s law enforcement. I took that responsibility very seriously. I tried to lead by example. I restructured the sheriff’s office to make deputies accountable to me and to the public. I am proud of all the men and women in the office of sheriff who served the public. Upon retirement, some of those went on to lead other police agencies throughout Flint and Genesee County. 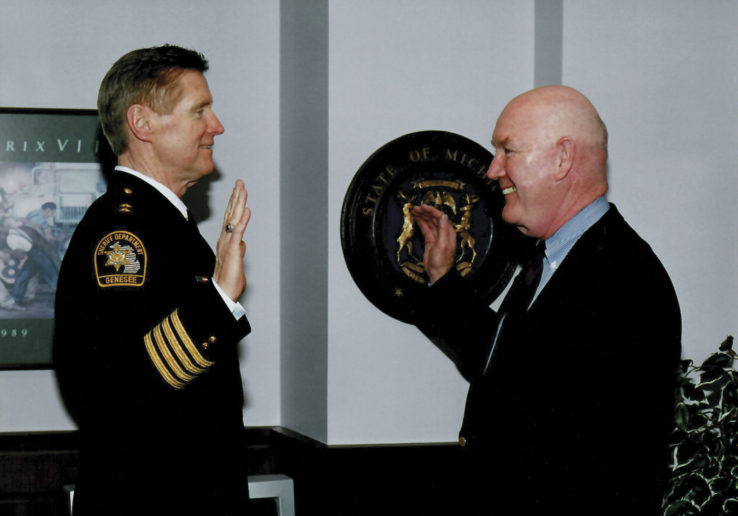 What do you consider to be your greatest success?

It’s difficult to talk about my greatest success, because my success depended upon the men and women who serve honorably in the office of Genesee County Sheriff. Because of them, I was able to change the culture of the sheriff’s office. We developed programs to help people in their time of need, such as:

Do you have any parting comments for your staff?

My deputies are responsible for the great success that I have had. I think of the number of lives that the paramedics have saved over the 21 years I have been sheriff, the number of significant criminal cases my detectives have obtained warrants for getting violent criminals off the street, the young people who start out in the jail working with the population that is largely suffering from mental health issues, opioid abuse and other health problems. This is the most difficult environment to work in and they have learned to help people while maintaining control of the jail. They know that you can never take an inmate’s dignity from them or treat them in a less than humane way. All of my deputies assigned to the courts and Road Patrol have served our community, protecting people coming into the courts. The guns and knives that were seized at the metal detector, along with drugs, are just a small part of what the court deputies do to protect all in the courthouse.

What would you like to say to the Flint and Genesee County communities?

I loved meeting and serving the residents throughout Flint and Genesee County. When I first became sheriff, I said that I wanted to be everyone’s sheriff – the “People’s Sheriff.” I hope that I, in some small way, helped our residents when they were in need. It has always been my pleasure to meet and talk with the public. Sometimes, this was in a Coney Island restaurant, a gas station, grocery store, etc. We have such hardworking, decent people in our community, and it has been a pleasure to meet them and talk about some of their concerns. 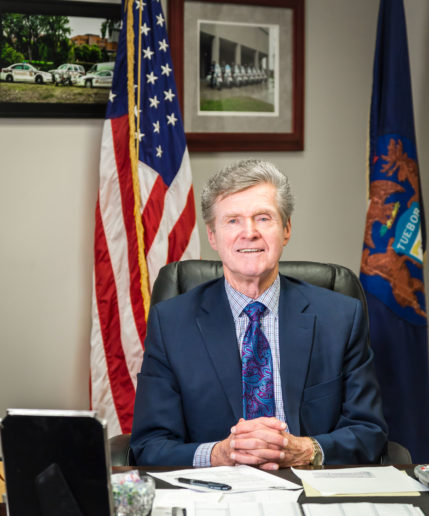 What person has taught you the most over the years?

I can’t pick any one person – there has been a number of people. Sometimes, it was a mother coming to the jail to visit her son who had an opioid problem, or a dad concerned about his inmate daughter getting the proper mental health medications. In other ways, it was one of my deputies speaking about some of his or her involvement in the community. Or, it could be the mother I met during the water crisis. It was the first day that my staff and I were out delivering bottled water when I went up to the door and noticed a hole in one of the windows. I knocked, and the young mother answered. When I looked in, I saw two young children, maybe two-to-four years old, standing with a blanket wrapped around them trying to keep warm. The mother welcomed me and talked to me like I was a hero, and all I was doing was giving her water and a filter. She hugged me and expressed her gratitude. What I learned from that woman, who was nearly destitute, was that it is greater to give than to receive.

Do you have any advice for your successor?

My only piece of advice is to listen and learn from the people in our community. They are the ones we serve. They are the ones, the taxpayers, who pay our salaries. Everything you experience along the way will help shape the type of sheriff you will be. When you make a decision, it should always be in the best interest of the people.

What are your plans for retirement?

I want to travel to Napa, CA to visit my daughter, Washington D.C. to visit my son, spend more time with my grandchildren, go to sporting events and – on occasion – sleep in!