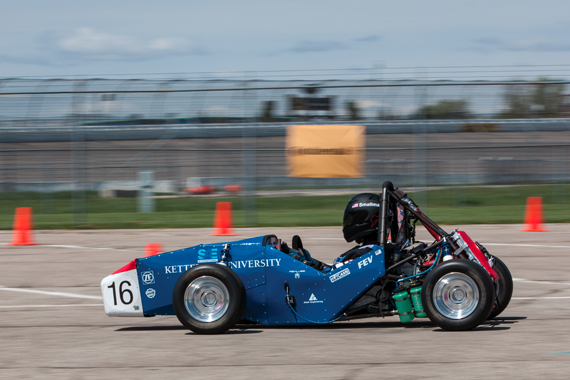 What does it take to produce engineering graduates who will invent the future? Practice. And Kettering University’s participation in a program called SAE provides its students with ample opportunities to hone their knowledge and skills through the ultimate real-world practice: competition.

Since 1905, an organization called the Society of Automotive Engineers (SAE) has pushed technological innovation by bringing together such brilliant minds as Henry Ford, Thomas Edison and Orville Wright to promote the free exchange of ideas. Four decades ago, SAE initiated an annual challenge called the Collegiate Design Series, in which college teams compete in various programs to design vehicles with different objectives. Since the mid-80s, the student teams from Kettering University have been major contenders.

Formula (FSAE) is the challenge centered on car racing, requiring fuel efficiency, precision engineering, and speed. In May, the Kettering Formula team competed in the Eastern competition at the Michigan International Speedway in Brooklyn, MI. The Western competition in Lincoln, NE takes place this month. Although both are important events, the Michigan conference is the crown jewel of the series, attracting 120 teams from around the world. “The Michigan competition is generally considered the competition,” says team leader, Corbett Ogletree. To illustrate how elite and competitive the Michigan competition is, registration opened and closed this past year within the span of only two minutes, leaving countless teams out of contention. Having secured this coveted spot, Kettering may have been considered among the lucky ones, but they had every intention of validating that luck with skill and a top-performing vehicle.

The team’s recent history has been checkered with mishap and redemption. In 2012, the team met with a major setback. Upon inspection of their car, the team was disqualified from the “dynamic events” – that is, racing – due to a technicality. Despite missing out on half of the possible points, Kettering still managed to rank 75th at the Michigan competition with points gained from the “static events.”

Heading into the 2013 season, the team used 2012’s disheartening showing to galvanize them toward betterment. Their goal was clear: build a car that could compete. Easily said, but fraught with countless challenges. Every aspect of their new car underwent intense scrutiny. Nothing escaped questioning. What aspects of their previous car just weren’t working? What parts could be improved? Individual parts and whole systems were tested and then re-tested. Through these intense redesigns the team coined a simple motto that has stuck with them: “Don’t settle for suck.” Their results speak for themselves.

All in all, 2013 proved to be a Cinderella story of the fruits of hard work and perseverance. At the FSAE Michigan competition, Kettering placed 15th among the 105 teams that competed in all events. Following up their drastically improved success at the Eastern competition, they finished in seventh place in Lincoln, NE. At a third competition in Ontario, Canada that wasn’t an SAE event, they placed third overall as the highest scoring American team.

This year, the Formula team is not resting on their laurels. On the contrary, they came up with a comprehensive plan to further their success, making drastic changes to the design of their 2014 car in the hopes of lowering weight and increasing speed and fuel efficiency. After voting on what the team wanted to overhaul, a sizeable list of improvements was approved, including the redesigning of their car to run on ten-inch wheels instead of the 13” settings they’d traditionally used. Though three inches might not seem like that much difference, it’s in fact a complete game changer: ten-inch wheels cut down significantly on the overall weight, since both the tire and rim of a ten-inch wheel combined are lighter than the rim of a 13” wheel. Despite delays in the delivery of a part integral to their redesigned car, the Kettering Formula team was on track to compete in May – not only with 125 other teams from all over the world, but also with their past accomplishments.

During that competition, complications in function arose yet again, not disqualifying them as in 2012 from all dynamic events, but preventing participation in several. When all was said and done, the Kettering team placed higher than their 2012 showing, ranking 67th, but falling from their 2013 results. Taking into account the number of changes made this season, most notably the wheel settings, a few kinks, though unfortunate, are certainly understandable. With these issues brought to light now, the Lincoln competition in June stands as another opportunity to pick themselves up by their bootstraps, returning Kettering to top standings. Though nothing in this sport is a certainty, what is certain is that the tenacity, perseverance, and ingenuity of Kettering’s FSAE team has surmounted far greater obstacles in the past. Come success or setback in Lincoln, the work the team has done in 2014 experimenting with new upgrades to their vehicle suggests a bright 2015 season.

Looking at Kettering’s Formula team, it is apparent that through the SAE competition, college engineers face real-world design issues, and build a portfolio of experience to accompany their degrees. Even by industry standards, the products created for the Collegiate Design Series are astounding, and team members make mutually beneficial connections with sponsors that will serve them in their future careers. According to the Kettering team’s chief engineer, Adam Watson, “When we’re working with these sponsors, we’re making connections for them and they’re making parts for us. They’re helping us out now, but down the road when we’re at our companies and we have to decide on suppliers, we can recommend them.” In this way, industry professionals pave the way for the future engineers, who in turn find themselves able to return the favor.

It is an exciting time for the Kettering Formula team, and only fitting that the students attending a university named after Charles F. Kettering, one of SAE’s first presidents, would be at the forefront of this incredible collegiate league that shapes the future of engineering and the technological horizons that represent our future.

See more photos HERE, or purchase photos from this story by going HERE and selecting the “Kettering SAE” category.