On the ground floor of the Dryden Building in Downtown Flint, a group of ten pop-up shops are up and running, and according to Mary Kang, Human Resource Coordinator with Skypoint Ventures, they are gaining popularity. Kang is currently running the gallery of shops.

Just what is a pop-up shop, anyway? The term describes the short-term use of a physical space to create a long-term, lasting impression with potential customers. “A typical pop-up is usually temporary and it helps get a business off the ground,” Kang explains. “We wanted to get retail activity going in Downtown Flint and see how they do through the holidays.”

Each of the pop-ups has a window on the street and a space with a door that opens like a closet which, according to Kang, holds a substantial amount of inventory. The shop displays the merchandise that’s available for purchase, but the individual retailers do not employ onsite staff. “There’s one point-of-sale area for all of the shops,” explains Kang.

“Everybody is excited and jumped at the chance to participate. It’s a great venue for someone who is just starting out.”
Mary Kang, Skypoint Ventures

The idea to create pop-ups in the Dryden Building was brought about by Skypoint Ventures Founder, Phil Hagerman, and its President, David Ollila. “Several high school students were interning at Skypoint Ventures for the summer,” says Kang.
“A few weeks into their internship, Phil wanted them to look at his idea to sell T-shirts, hats and bracelets, which became Skyward Clothing. The students took the idea to 100K Ideas (located in the Ferris Wheel), a non-profit organization that helps businesses with startup. Once they started the T-shirt company, they decided to sell it in the Pop-Up Shops.”

The students reached out to vendors to see if they were interested in locating a pop-up in Downtown Flint, and the Machine Shop and Detroit Muscle joined of their own volition. The students who were assigned to take on the project were Nolan Day, Luke Evo, Connor Wilkie, Tom Hagerman and Tori Ramfos. “They were able to get all of the pop-ups opened before The Crim,” Kang shares.

The Dryden pop-ups are open Monday through Friday from 10am-5pm. But Kang says the hours may expand and the number of pop-ups may expand, because there is so much interest. “Everybody is excited and jumped at the chance to participate,” she says. “It’s a great venue for someone who is just starting out.” 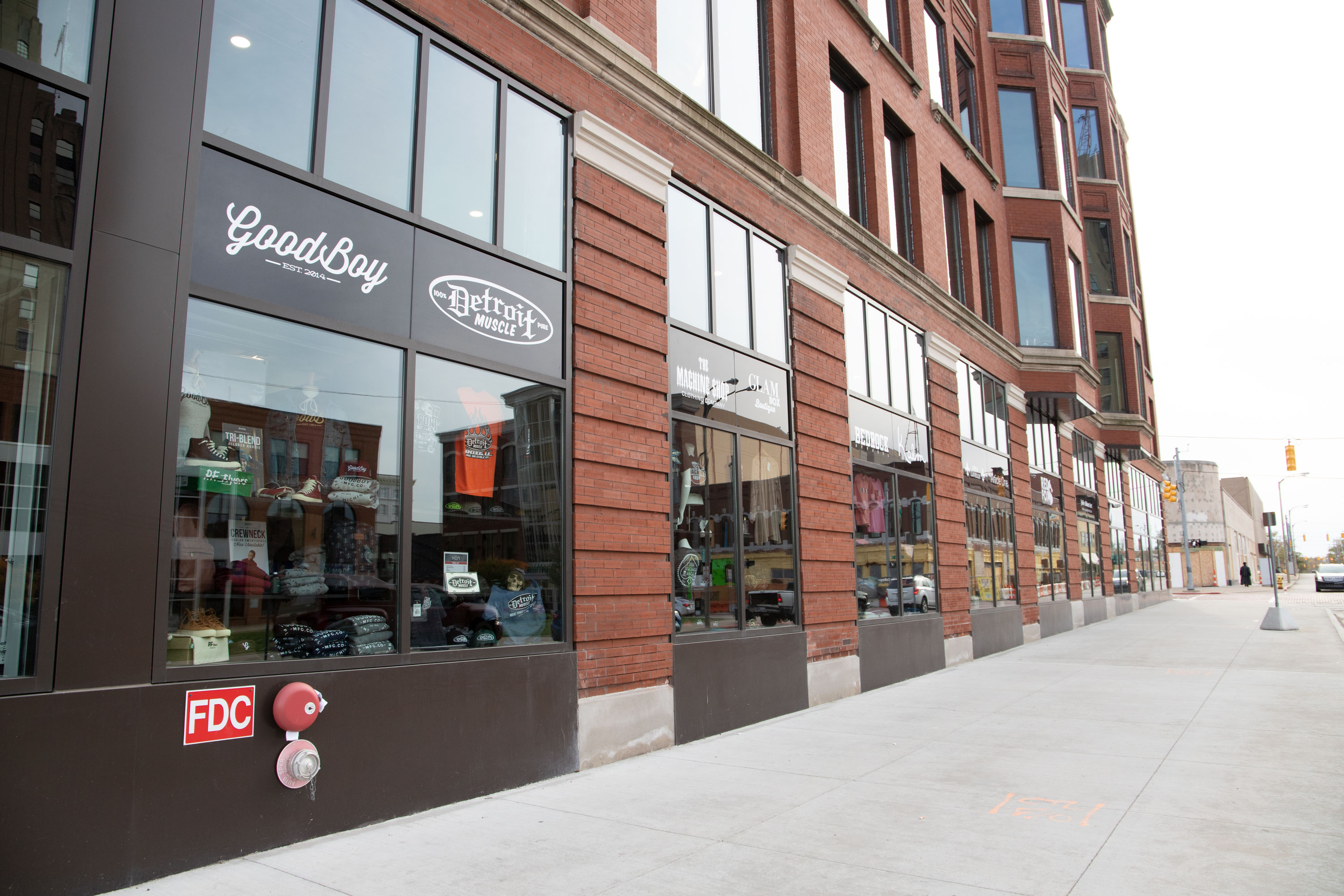 On Thursday, October 25, the press and public were invited to attend a ribbon-cutting in celebration of the opening of the Dryden Building Retail Pop Up Shops. 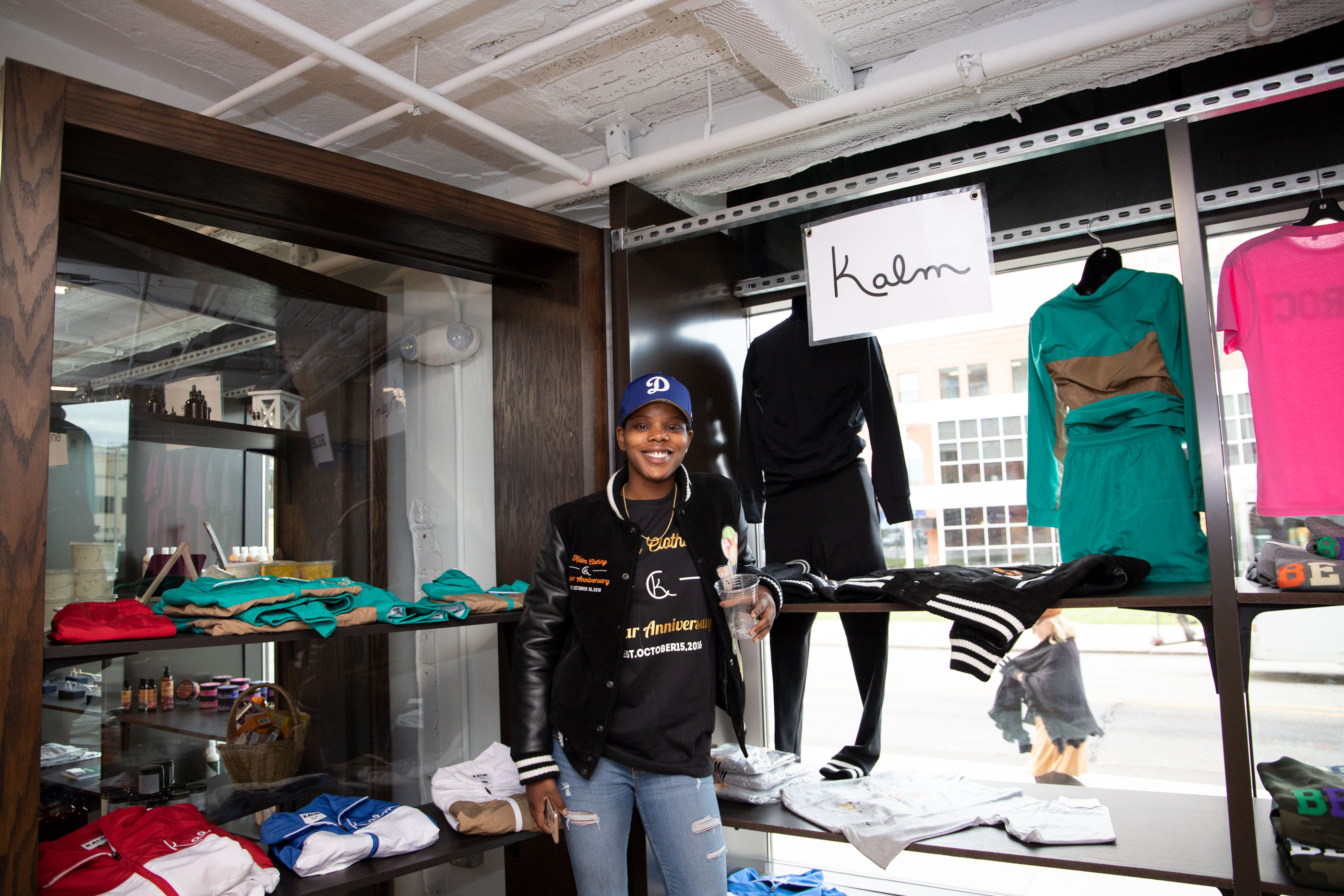 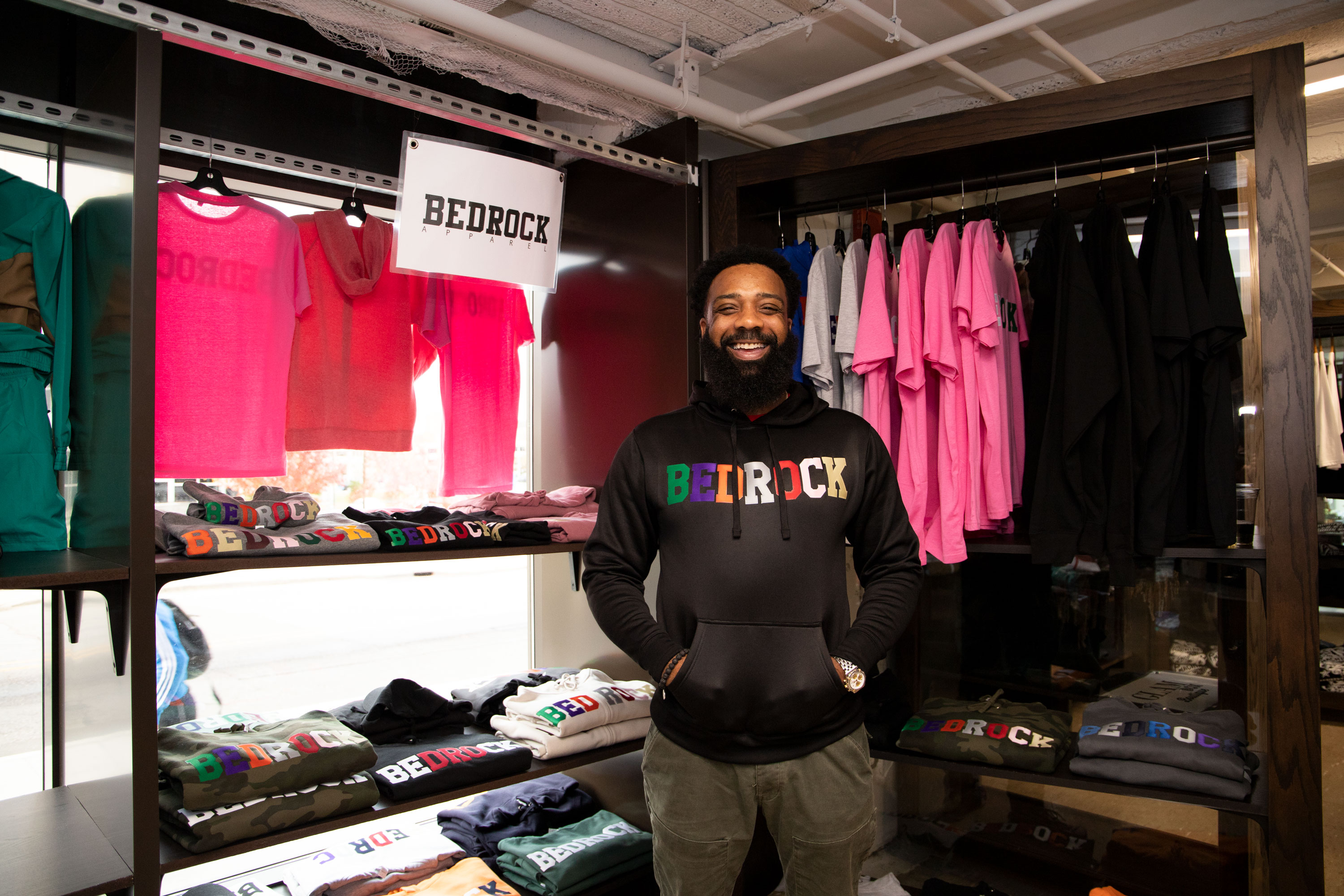 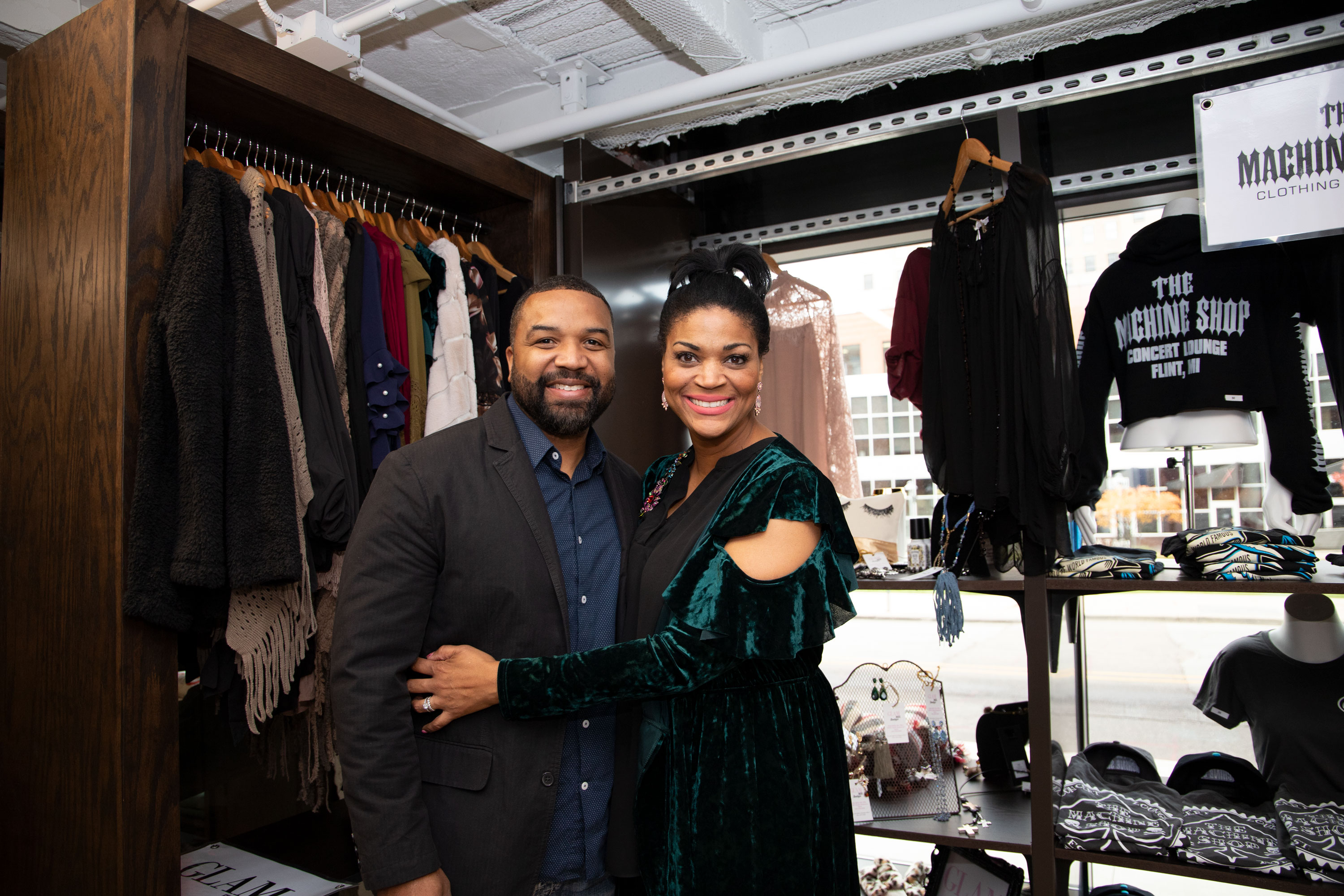 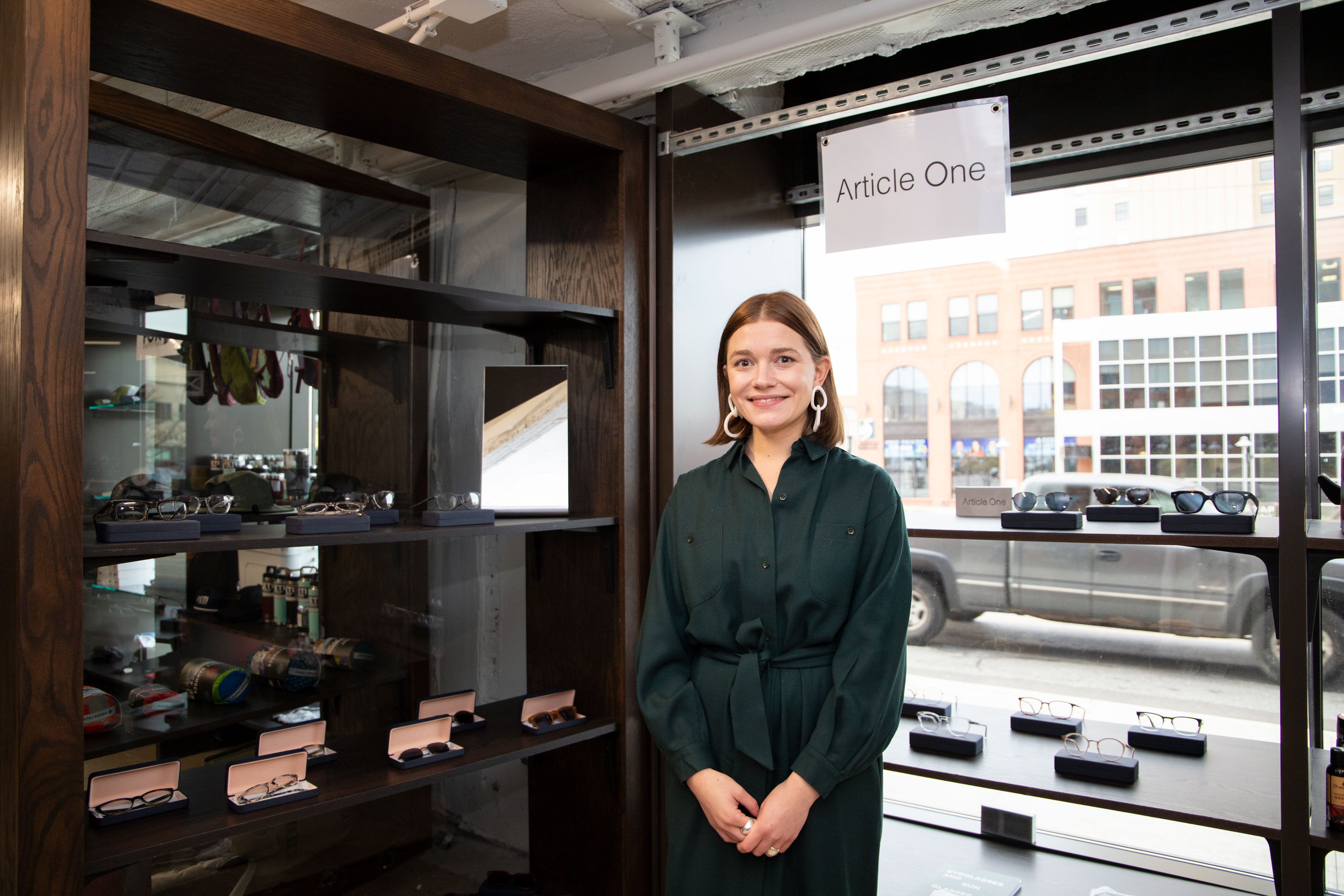 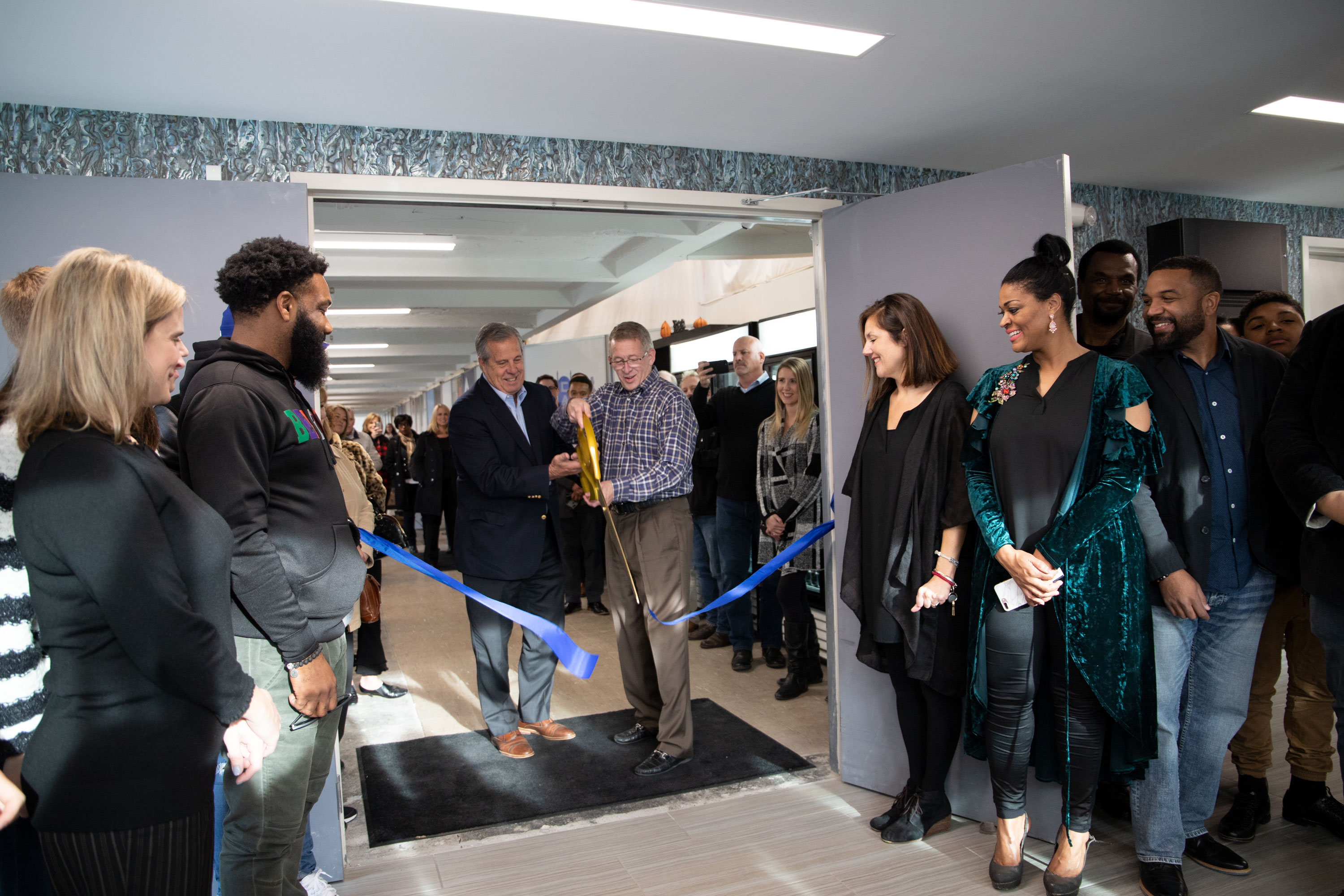 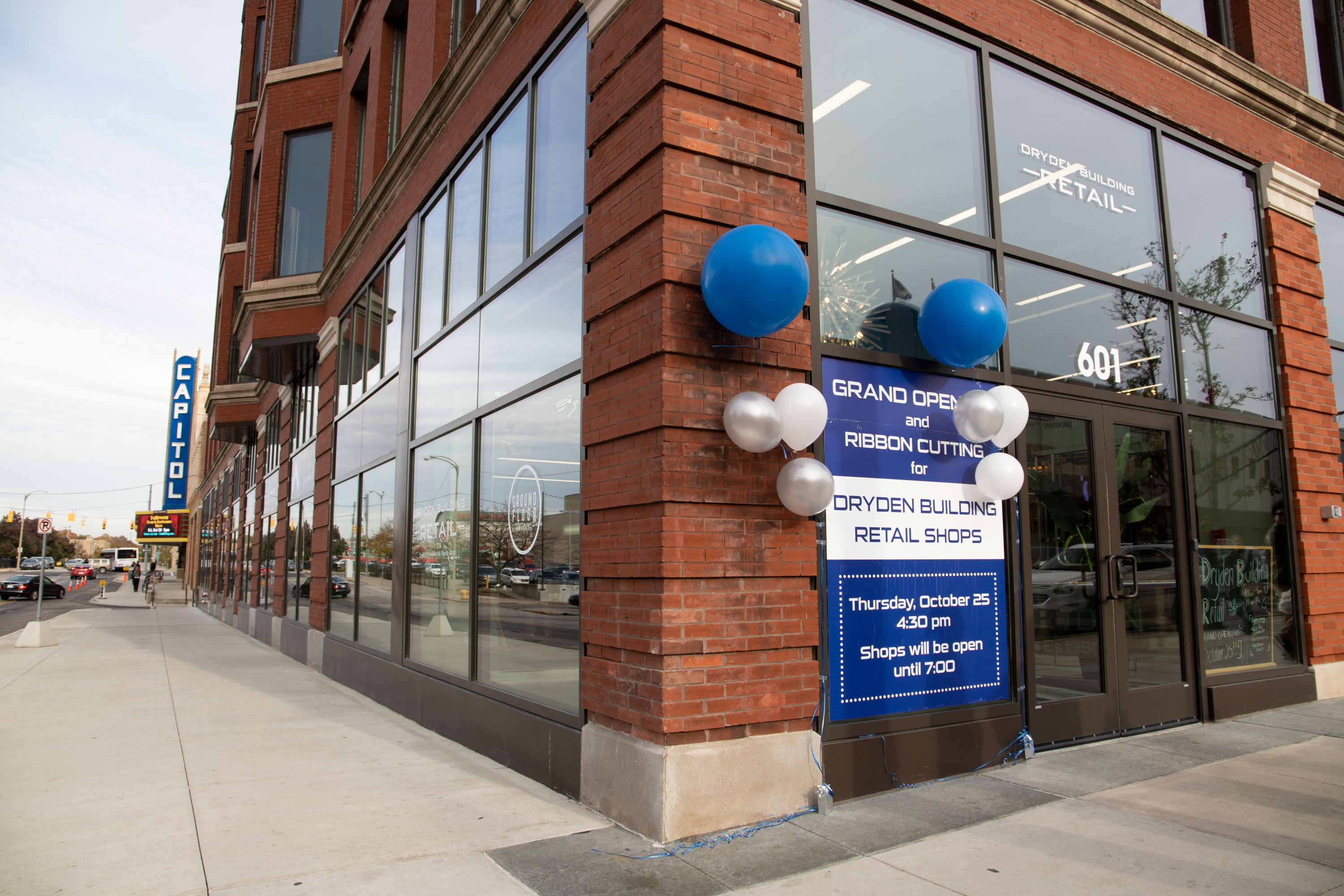 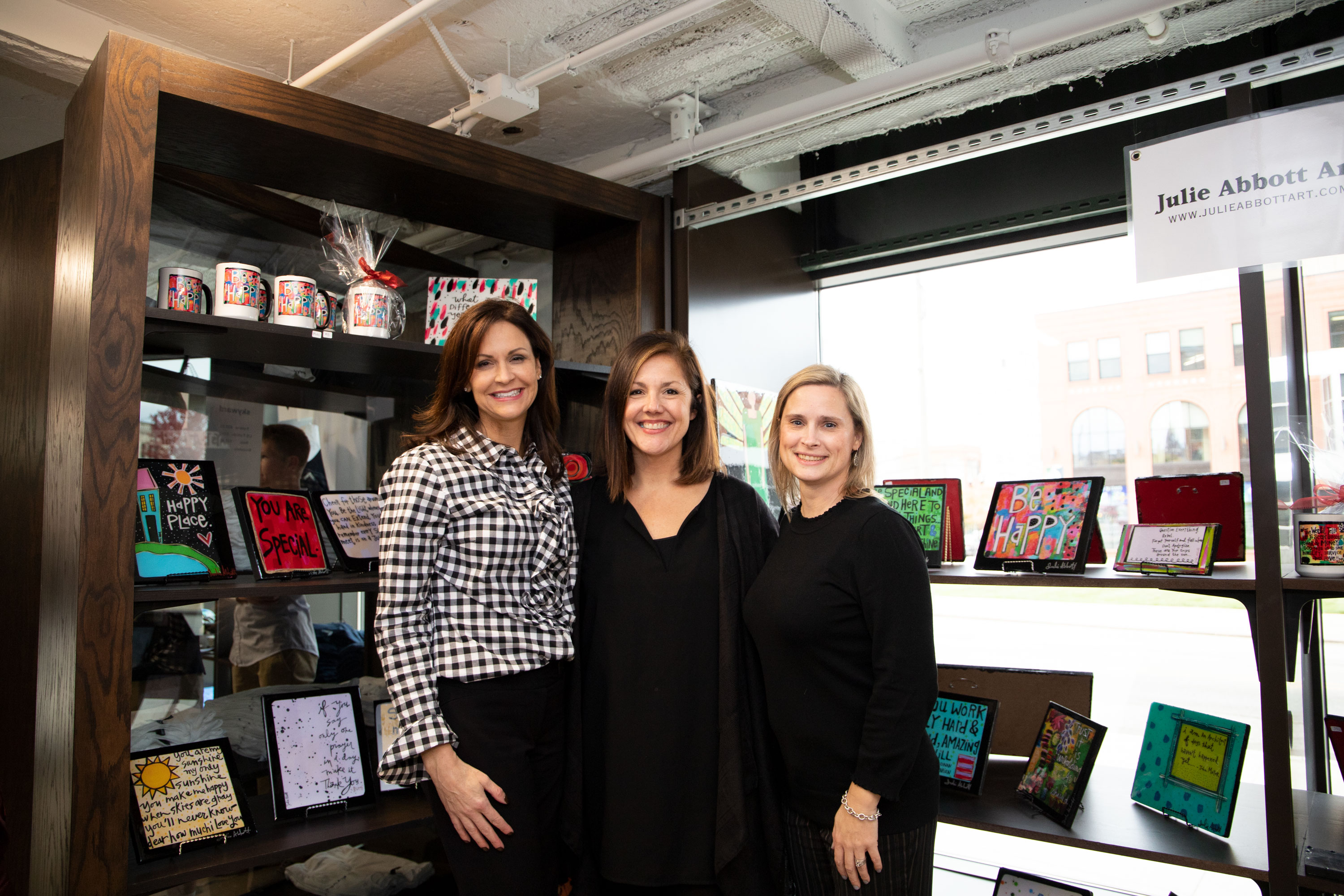 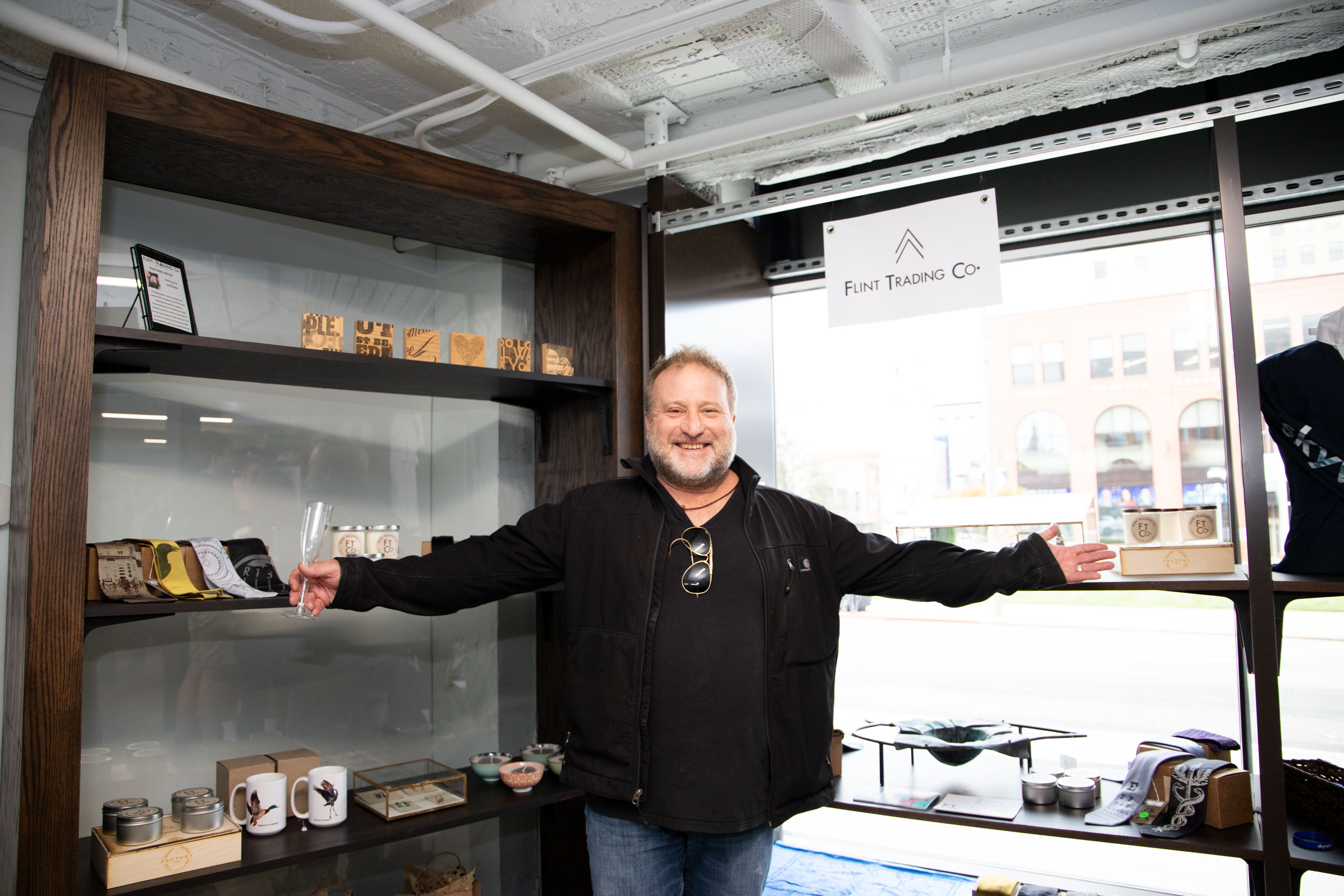 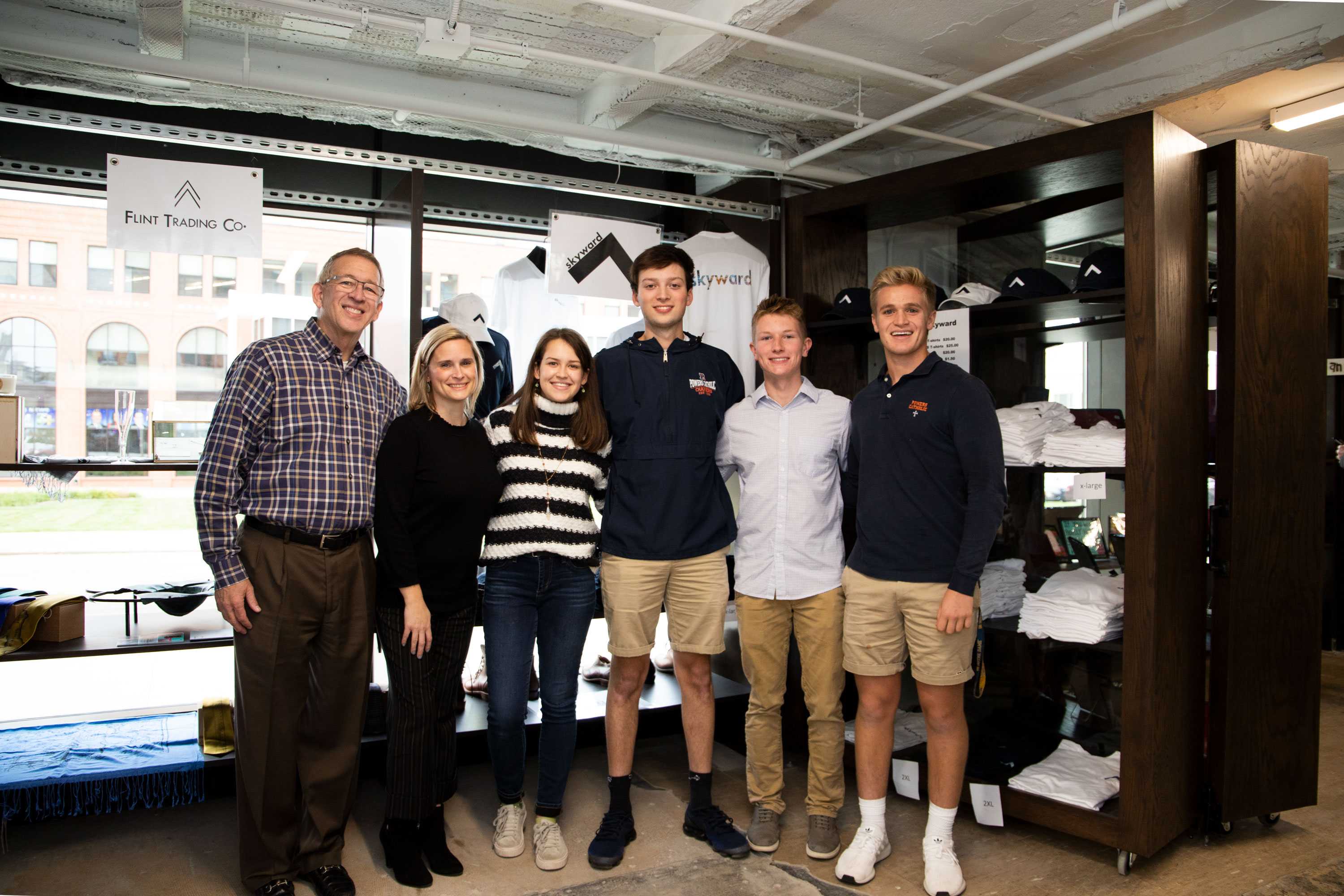 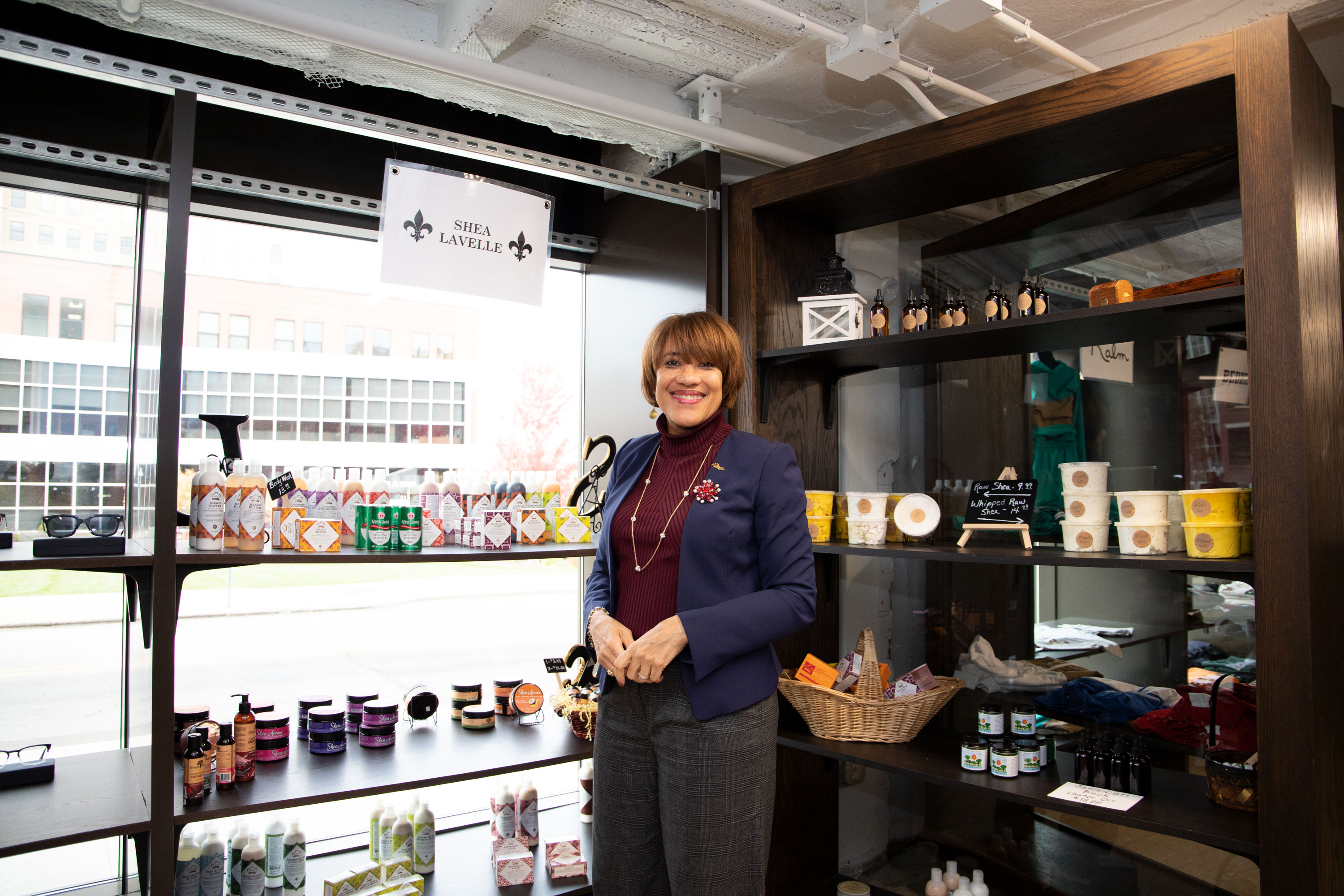 In addition to the stores, there is a revival of the former Ground Floor Market offering Downtown residents, professionals and students a place to grab a snack and a cold drink. The Pop-Up Shops were the brainchild of Skypoint Ventures’ Founder Phil Hagerman, and President David Ollila. This initiative gives business owners the opportunity to have a retail location without the need for staff. Several local high school students played roles in executing the vision for the shops.