If there’s one thing Flint City Police Chief James Tolbert is sure of, it’s his philosophy that a police department must strive for positive interaction with the community it serves. “Our goal and mission is to let the community know we’re here for them,” says Chief Tolbert, who was appointed to his position in the fall of 2013. “I think we’re fortunate in Flint, because we don’t have the strain other cities have.”

High profile cities like Baltimore, Ferguson and Arlington have certainly faced turmoil such as misconduct, brutality, protests, and violence between the police and the public they serve and protect. However, that’s not the case in Flint. “We understand that, at any point in time, we are one incident away from the possibility of dislodging the trust of the entire community. Something could flare up at any time,” says Tolbert. Knowing the community’s trust can easily be broken, the action-oriented, problem-solving, pro-community-minded chief isn’t waiting around for an unpleasant occurrence to happen. He’s working in the trenches to ensure the community sees the police with optimism rather than negativity. 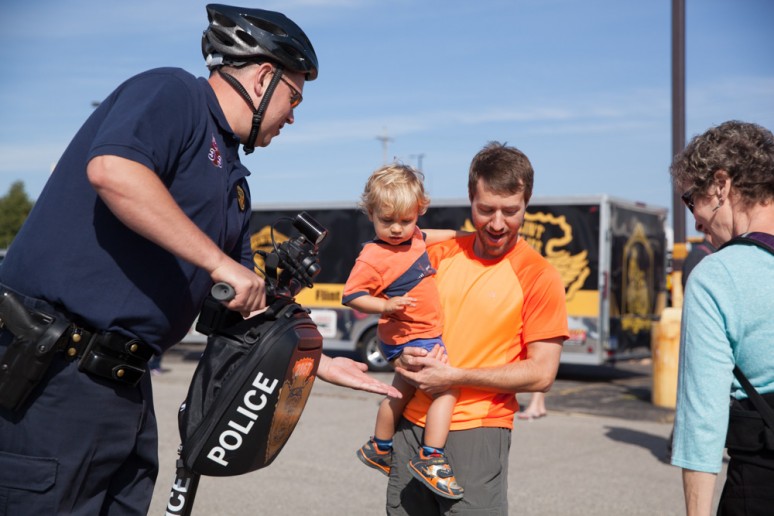 For example, he makes sure the police in Flint are not just identified as the guys who take family members away in handcuffs. “Obviously, our service and coverage are limited,” he says. “Some officers work four days a week on administrative duties; but on the fifth day, I make sure they’re out in the community. It’s important to have police-initiated contact with the people, when officers ask and answer questions, handle concerns related to crime and help citizens learn to see the police in a positive manner.”

Tolbert’s mission is widely known throughout the Flint Police Department. “It’s our goal – it’s my mission – to be known as a department that gets an answer to every citizen’s question,” he says. “We value open dialogue with the citizens. If an officer doesn’t know the answer, he gathers information or contacts me and we make sure that person gets an answer.” When it comes to searching for answers, Tolbert has help. Sergeant Tanya Meeks helped launch Flint Neighborhoods United (FNU) – an organization where community leaders of various groups (Flint Police, Flint Blue Badge, Michigan State Police, Citizen’s Radio Patrol, Genesee Land Bank, Flint Public Library, Flint Fire Department, Consumers Energy, Edible Flint, Genesee County Commission on Aging, etc.) meet monthly to collaborate. “I applaud all citizens who step up and patrol their neighborhoods or put effort into improving Flint,” Tolbert says.

Volunteer groups such as Citizen’s Radio Patrol are a success because community members are looking out for their neighborhoods and coordinating with the police. Another group known as Advocates and Leaders for Community Police and Trust (ALPACT) also meet to connect, communicate and work to improve Flint. “The ecumenical community plays a role in this, too,” says Tolbert. “We’re initiating a stronger chaplain’s course for area pastors who are called in to respond to critical incidents. This is important, because if a witness or tipper is anxious about providing information, the chaplains are respected by the citizens and help to calm tempers or offer confidence and support to those involved in a case.”

Joe King, president of Flint Neighborhoods United (FNU), is impressed with how the Flint City Police Department takes preventative measures to help deter crime. “The community and the police come together at monthly meetings to sit down and dialogue,” he says. “We try to work together – we discuss the ongoing process of keeping Flint neighborhoods as safe as possible.” King became involved in blight clean-up in the 1990s when he saw his own neighborhood deteriorating. “I’ve been around for a while, and it’s good to see FNU serving as the umbrella group for all of the various organizations, block clubs and crime watch groups. I’ve seen FNU make real changes – they’re a solutions-driven group.”

For example, the Flint “party store loitering” crack-downs stemmed from FNU pushing for more observation and more surveillance. King gives credit to Chief James Tolbert for being active, engaged and willing to listen to the issues brought to the table. “He’s readily available,” says King. “Chief Tolbert supports our efforts and he’s the first one to go out where and when there’s a problem. He has a unique way of doing things and he gets positive results.” 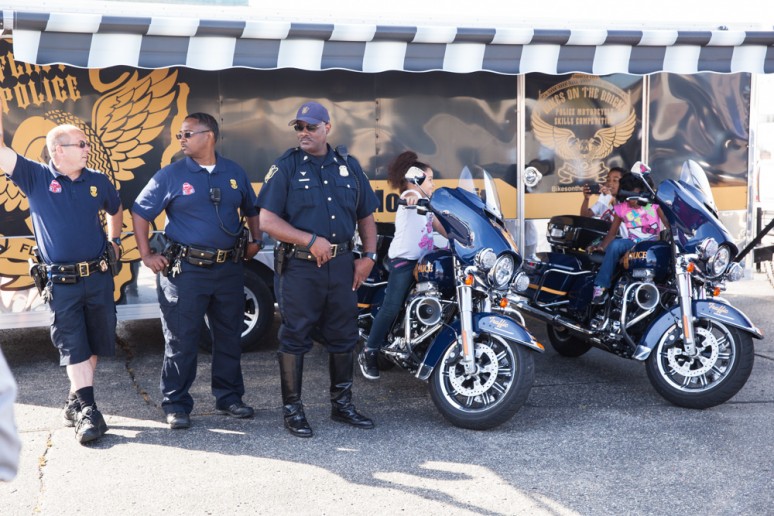 Jane Richardson, who serves as the editor for the Flint Our Community Our Voice newspaper, which is sponsored by FNU and prints about 5,000 copies per issue for those without electronic access, agrees Tolbert is an asset to the community. “He is multi-faceted when it comes to being engaged, answering questions – he knows Flint’s priorities and is working on strategic solutions.” She is amazed by Chief Tolbert’s availability and admires his ability to collaborate with the community. “He’s everywhere – he attended the Flint Public Neighborhood Art Parade and danced with the kids, he was at Back to the Bricks, Light Up the City, FNU meetings – he’s so approachable.”

Tolbert believes wholeheartedly that positive encounters are the key to successful community-police relations. “When a citizen is valued like this and they can see that an officer didn’t just say, ‘Oh well,’ to their concern, it really makes a lasting impression.” He is keenly aware of how fragile the public’s trust is – but that’s what motivates him. “If I sound passionate about this, it’s because I am,” Tolbert says. “It’s really about common sense.” Good relationships between the police and community boils down to common sense and practical methods – both of which seem to be Tolbert’s natural gifts. “I came to Flint to talk about and deal with the issues, and we are.” Dealing with the issues is what Operation Fresh Start was all about in 2014 – a program designed to help Flint residents settle infractions without punishment. Thousands of people received a fresh start when they applied for a driver’s license, cleared up outstanding warrants or tickets and didn’t have to go to jail. “Nobody believed it was true,” Tolbert says, “but after a few people realized we were serious about taking care of them and there would be no jail time, the word spread and people began talking about these types of things. In disbelief, they realized we cared about them and were not out to destroy their lives, but to help them get their lives back in order.”

Since Tolbert came on board, he’s tripled the amount of training officers receive. “We try to send our officers to customer training workshops, human-relations classes, crime prevention assessment training and other law enforcement seminars that are all geared to improve the way we interact with the community,” he states. In addition, he has launched various partnerships with strong entities such as the Michigan State Police. “Every other week, we have an event and visit various parts of the city where our officers team up with Michigan State Police Troopers to go out and simply talk to citizens, hear what they have to say. By doing this, we offer a united front when it comes to how the public sees us and that really goes a long way to our credibility and to what we do, how we do it, and it reinforces the public’s trust in us.”

With collaboration and sponsorship from Consumers Energy and Walmart, the MSP and City of Flint law enforcement agencies teamed up on the last Thursday of the month (from April to September) for its “Light Up the City” initiative. Troopers and officers were out at open locations interacting with the kids, dancing, eating and having a good time parading through the community. Other popular police-community events include “Touch-a-Truck,” where young people can interact with 30+ law enforcement vehicles and enjoy other family-friendly activities, and the “Stop the Silence-Flint” three-on-three basketball tournament between police and youth. “Without help from the big corporations, we couldn’t do events like this, which are designed to help citizens see the kind of commitment we have to Flint,” Tolbert says. “We hope they’ll take that positive energy and continue it in other areas of their lives and neighborhoods.”

Tolbert knows that keeping the police and community relationship alive is a long haul and he calls his efforts a holistic approach. “Whether you’re a police officer, citizen, chaplain, school board member, crime watch member – whatever you are – we all have to work together to address the issues, and when you have great public confidence there will always be support,” he says.

“There isn’t a lot of positive press in the media about the police,” Chief Tolbert continues. “It’s usually the negative that is featured and the news doesn’t accentuate the normal, but rather the abnormal. If we can somehow flip the normal to be people having positive encounters with the police – well, that’s the whole concept of positive police-community relations.”