Dr. Patrick Atkinson, Professor of Mechanical and Bioengineering at Kettering University, believes there are “undiscovered surgeons walking among us and they don’t even know it.” He meets them firsthand as he helps pre-med and bioengineering students get to the heart of what it’s like to be a surgeon, by doing one crucial thing. 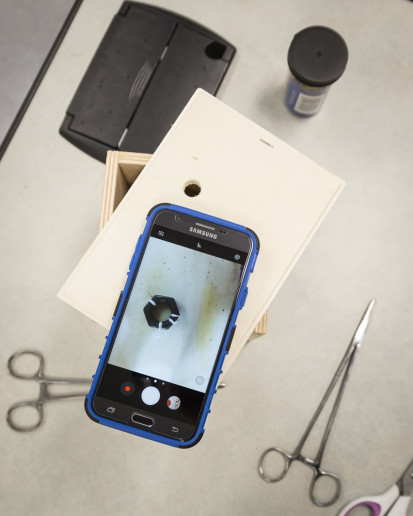 is key,” says the ’91 Kettering grad who calls himself the “nerdiest version of a prof essor you’ve ever seen,” because of his passion to combine the sciences and arts with hands-on experiences, all under the umbrella of instructing and coaching his students.

His methods are humble. “I’m providing them an opportunity to perform a simulated surgery – using items from the local Dollar Store and a cell phone,” he offers. “More importantly, we use engineering principles to solve biological problems.”

In his own unassuming and enthusiastic manner, Atkinson is opening the eyes of young learners in unorthodox ways. “It’s simple, yet complex,” he says. “Some people will never get it and others get it in two minutes – there’s a wide range.”

Using a toothpick, a nut, dental floss, surgical stitch scissors, and a ten-inch wooden box with two holes in it, a classroom full of future doctors and engineers discover the delicacy and challenges every surgeon faces when cutting flesh, skin, muscle and bone.

“We start off with simple tasks. The toothpick represents the needle used by a surgeon, the dental floss is like suture material and the nut is the muscle or bone being repaired,” explains Atkinson as he demonstrates the task of teaching his pupils techniques used by every surgeon.

Next, a hotdog is added to represent the tendon or bone being operated on. And the wooden box with holes in it symbolizes the human body or cavity in which the student-surgeon must perform the art of tying or closing the incision. They’re learning, by touch and limited sight, how to tie and cinch a knot.

“When you cut the suture, you want to make sure you don’t cut the knot too long,” he explains to the mock surgeons. “The wick will flop around and become irritating to the adjacent tissue. You don’t want it too short, either, or it will cut through the knot. The trick for a surgeon is to cut it at a 45-degree angle to get the appropriate length.”

Atkinson admits the students get frustrated, so he guides them to make it a rewarding experience. “If it’s impossible, its demoralizing,” he says. “So, it should be achievable. However, this class provides the means for prospective surgeons to know whether they’re made for it or not.”

Sound easy? Well, Atkinson amps up the challenge when he tells the class they must do all of this while wearing the professional surgical garments worn by the doctor in the operating room – gown, gloves, mask and scrub cap.

“We take it up a notch,” he smiles. In fact, this is a big part of his curriculum. “Learning how to move in the surgery room, keeping a sterile environment and trying to feed string through holes in a box is a lot trickier while you’re wearing protective clothing and gloves. You become anonymous and you must learn to work as a team,” he explains.

More trials are thrown at the frustrated students when Atkinson transitions them to the final phase of understanding the demands and difficulties faced by a practicing surgeon. 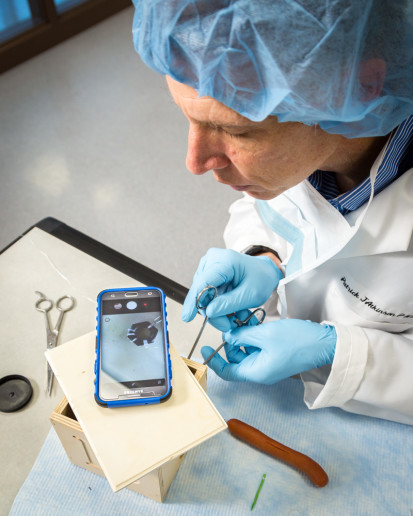 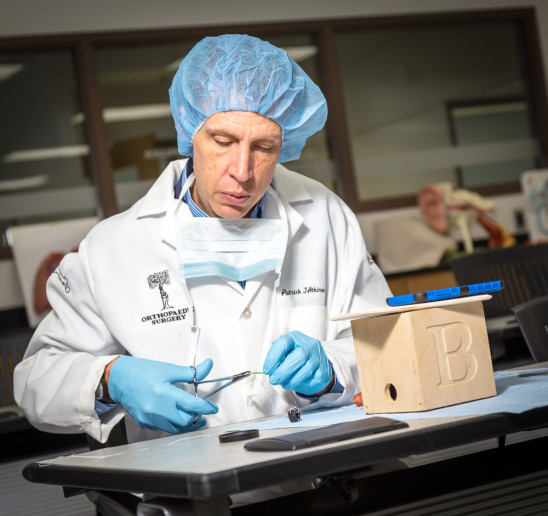 He instructs the hot, annoyed, frustrated and exasperated students to place their cell phones on top of the boxes, turn on the live camera mode, and repeat the “surgery” of tying sutures through the holes in the box using the video image as their guide.

Easier said than done. When Ted Wilson, 23, a senior studying mechanical engineering, took Dr. Atkinson’s Intro to Bioengineering class, he immediately knew something was different about his professor and the way he taught.

“It only takes a minute or two before realizing he has an amazing amount of passion for what he is doing,” says Wilson, who spends his co-op time working and performing research at an orthopedic implant company. Wilson predicted the class to be boring, based on the “Introduction” course title and assumed he’d be learning specific terms and definitions related to body parts.

“My expectations were shattered,” he says. “Within the first hour, we were hearing him say, ‘here’s what you need to know and what it’s like to perform surgery.’ He has an amazing grasp on the whole concept. We were interacting with an anatomical dummy and performing a simulated appendectomy. It was so much better than I expected. He made the learning so easy because he’d lecture, and we’d learn it, and then we’d apply it. It really opened my eyes to see what it is like to be a surgeon and what they go through, from beginning to end, in an operating room. He has us using our cell phone as our eyeballs during surgery. It gave me a better point of view.”

The view, however, is limited and skewed. “When all of us are wearing scrubs, masks and gloves, it’s hard to tell who is male or female. Everything is not so clear anymore,” recalls Wilson. His experience in Atkinson’s class helped him in real life at his research job where he was able to troubleshoot and solve some problems in the orthopedic industry.

“If I had not had his class, I would have misconceptions about surgeons that I don’t have now,” Wilson says. “I have a better appreciation for what they go through. I understand the value of developing or creating tools and instruments that can enhance their role as surgeons.”

Atkinson embraces and delivers the Kettering mission to perfection. He puts theory and practice into the minds and hands of his students. In fact, his inspiration generated a change in career paths for the young man once determined to earn his doctorate and work in the orthopedic research industry, but is now planning to follow in the footsteps of his professor – and become a professor, himself. 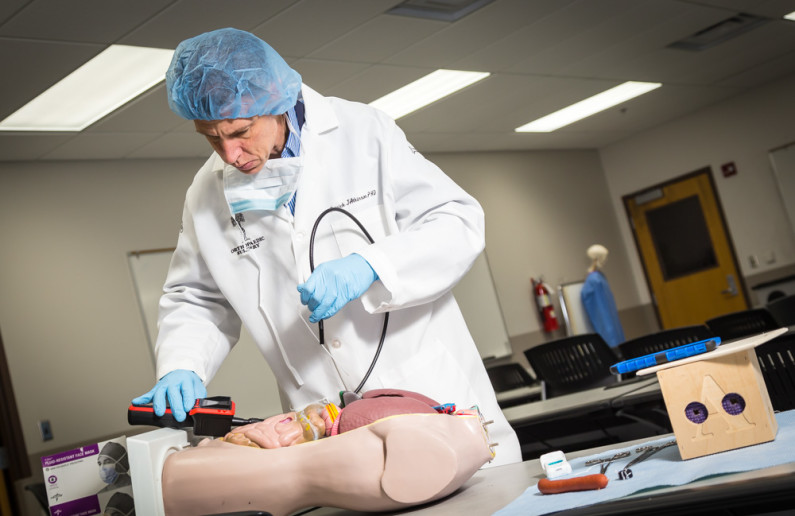 Wilson says his bioengineering professor “has charisma and makes me want to learn more, all while enjoying it at the same time.” He assists Atkinson, who also teaches an Occupant Safety course about how the human body reacts to car accidents. And any extra time Wilson has while on campus, he’s researching crash test dummies, femur bones and other important data related to accidents and bones in need of orthopedic surgery. “He’s influenced me so much that a career I never thought of going into I am now considering, and I attribute it to him.”

“I’m just providing a foundational and transformative experience which helps my pre-med and engineering students to become innovative thinkers and learners, and successful in their future occupations,” says Atkinson.

“If I had not had his class, I would have misconceptions
about surgeons that I don’t have now.”
Ted Wilson, Former Studen