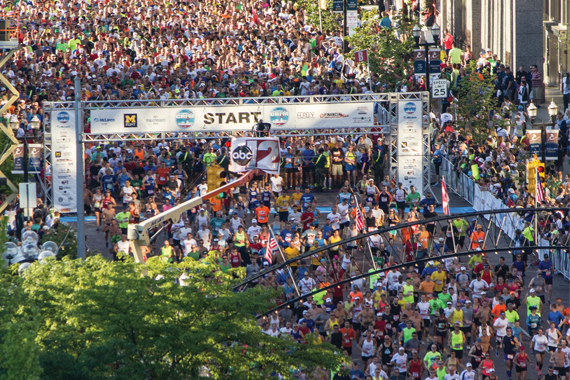 Downtown Flint was jammed with people during the 37th annual Health Plus Crim Festival of Races! The Kenyans could barely contain their energy prior to the start, dancing up and down the bricks, impatient for the race to begin. Music played in the background and the bright, sunny weather was much to the liking of the runners: a cool 59 degrees at the beginning of the 10-mile race. “Runners, walkers, please clear the course!” ordered the announcer. The first wave of runners pressed against the start line. Saginaw Street became silent during the National Anthem and hands were placed proudly over hearts. “It’s a beautiful day for a race in Flint!” said Laurie Prochazka of McLaren Flint, sponsor of the 10-mile run. Tony Hicks was standing at the sideline waiting to cheer on the Stone Steppers, a group of runners from the Greater Detroit area. “I love this race,” exclaimed Tony, who wasn’t running this year due to an injury but was happy to cheer on his friends.

More than 15,000 runners/walkers participated as thousands of spectators, some waving signs of support for a loved one, cheered them on. More than 3,000 volunteers helped make the Crim a huge success. The first group at the start line for the 10-mile run was the Over-30 runners, 18 of whom reached the milestone of running the Crim for the 30th consecutive time this year. Doris O’Connor, who is 82 years old, walked more than a mile with other family members from the Cultural Center to watch her son Ron O’Connor run the Crim for the 30th consecutive time. Dripping with sweat, Ron handed his mother his medal. For the fourth time, Julius Kogo of Kenya was the winner of the 10-mile run, with a finish time of 45.55 minutes. The crowd cheered as he crossed the finish line. Later, runners of all shapes and sizes celebrated as they finished to the sounds of wild cheers, and even a few tears were shed by some.

Highlights of this year’s event included a visit from Dave McGillivray, race director of the Boston Marathon, who spoke at a press conference on Thursday. Dave got into running because he was always “last picked” for other sports, a circumstance he says left an indelible mark. “You can’t get cut from running,” he laughed, and running improved his self-esteem and gave him confidence. “When you feel good about yourself, you can overcome all hurdles,” he said. Dave has since run the Boston Marathon 41 times. He came to town to support the Crim, which he says is much more than a road race. In the wake of the Boston Marathon bombings this spring, he found an outpouring of strength and support. “We can’t succumb to terror,” he said somberly. “We can’t let them take this from us.”

Finally, Bobby Crim was honored as the recipient of the Health Plus Community Vision award. “I’m very humbled to accept this award on behalf of all the people who have helped make a difference,” he said. He credits original race director Lois Craig, the Kitchen Cabinet and all of the volunteers, board members and staff for the continuing success of the Crim. “GM left. Buick left. But the Crim stayed,” said Bobby. “The Crim belongs to the community and they embrace it.”

Are you interested in purchasing photos from this story? Go HERE and select the “Crim Festival of Races” category.