For the past 24 years, Zehnder’s Snowfest has attracted thousands of people from around the world to experience the wonders of winter. Since 2004, Gordon Oberman, Alphonso Foster and their team have been providing a wonder in the double block snow carving competition while enjoying the camaraderie and frosty fun this event provides.

Gordon has long been friends with Al Foster, who had competed with a team in the World Class Double-block snow carving competition at Snowfest. “It always sounded like a lot of fun, so after a few years of telling the guys to bring me on, they finally did,” Gordon remembered. Al, who has been involved in snow carving since 1995, says that as a fellow artist, Gordon was a natural fit for Team USA- Flint. Ryan Leix joined the team one year after Gordon, and Sam Licavoli rounds out the group as the newest member, having joined in 2014.

The World Class Double-block snow carving competition is the most prestigious of the various snow carving categories at Snowfest, involving two 10-foot cubes of hard-packed snow weighing 13 tons each. Teams have six days to chip away at these massive blocks and bring their sculptures to life. “Some folks imagine snow carving is like making a snow man . . . but it’s not even close!” Gordon exclaimed. “The snow we carve is very, very compacted and hard.” In the process of creating their sculpture, the team removes roughly half of the snow from the block by chiseling, chopping, sawing and shoveling. “Fun, right?” says Gordon, “but it truly is my kind of vacation!” Instead of having certain assignments, each team member works in every area needed, from grunt work like shoveling to carving the most delicate details. “If one of us is struggling with a particular thing we’re working on, we switch with each other. Sometimes, a fresh set of eyes can work wonders.” 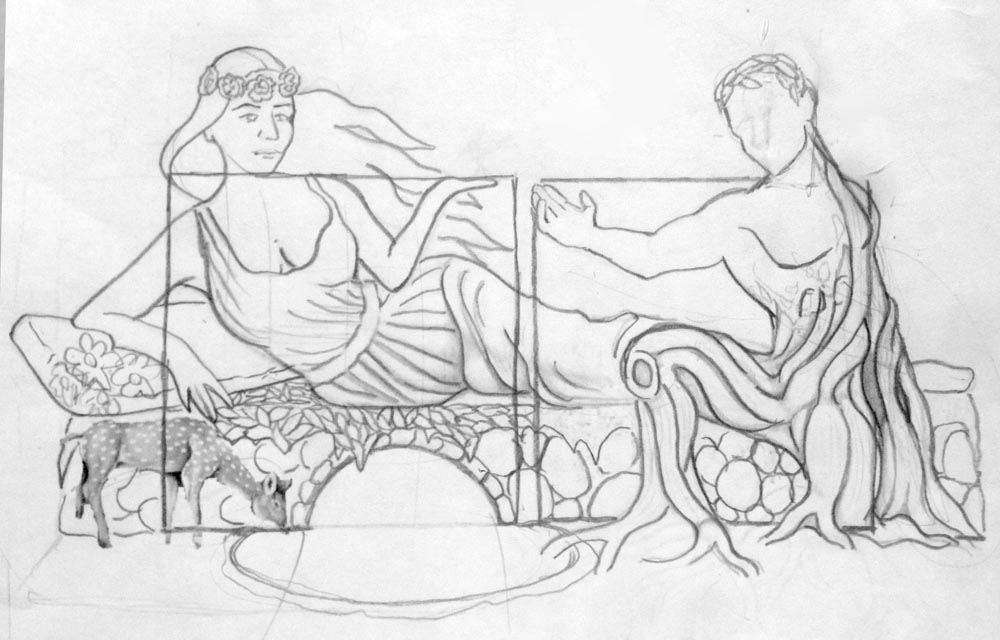 This year, the team’s concept was called “The Awakening,” which depicted Mother nature either turning a man into a tree or vice versa.

This year, the team’s concept was called “The Awakening,” which depicted Mother nature either turning a man into a tree or vice versa. 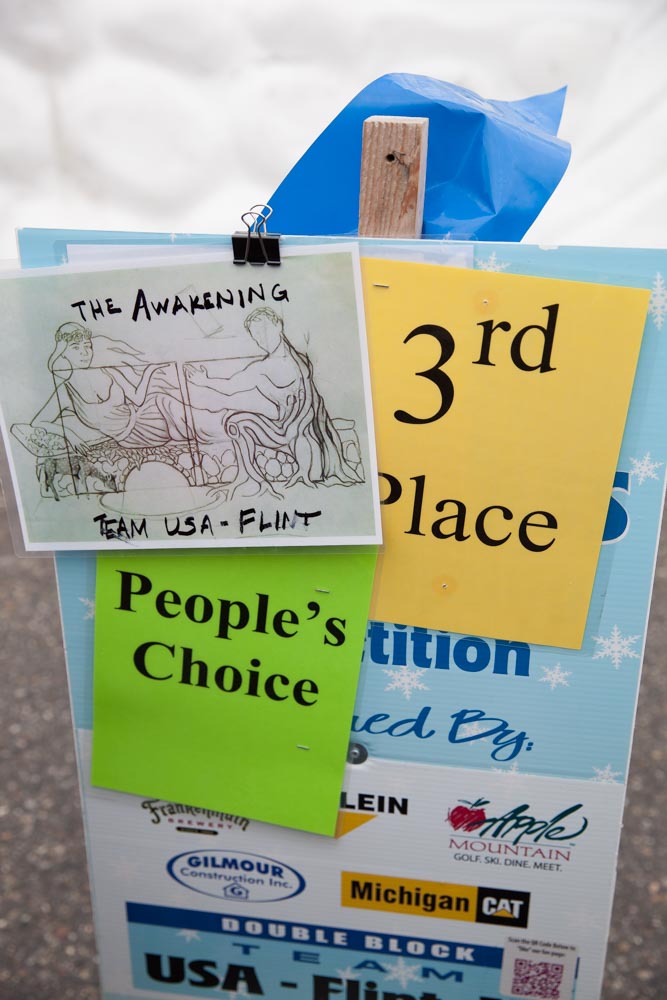 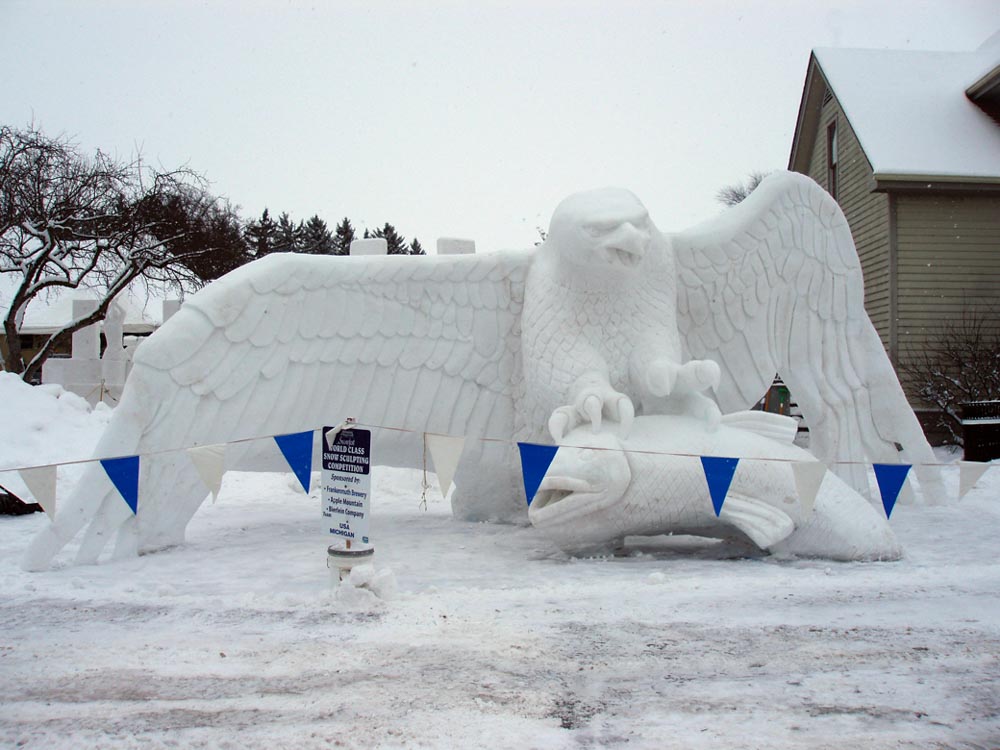 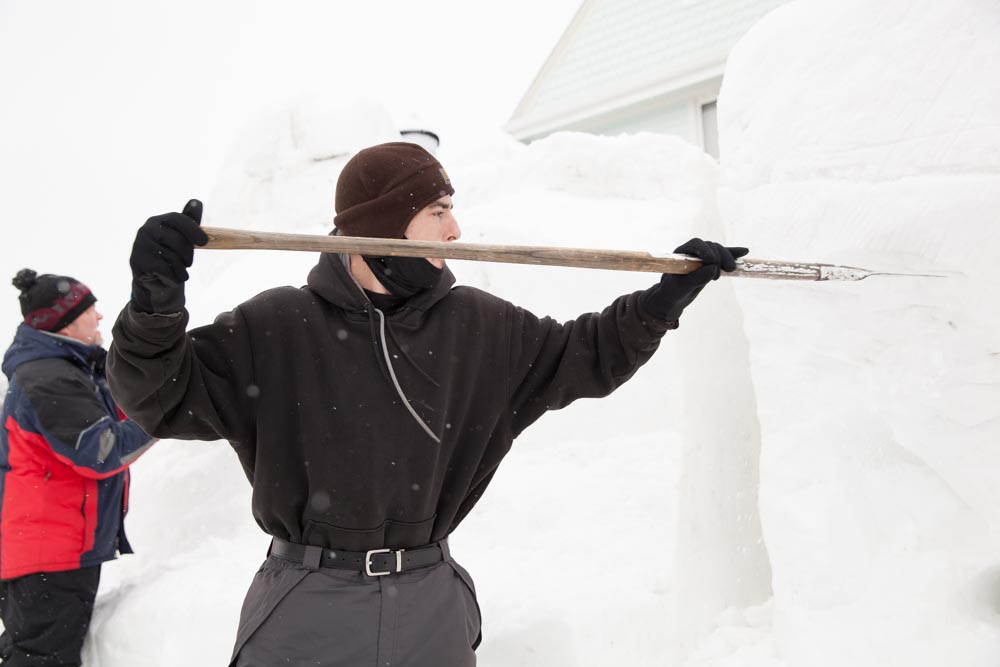 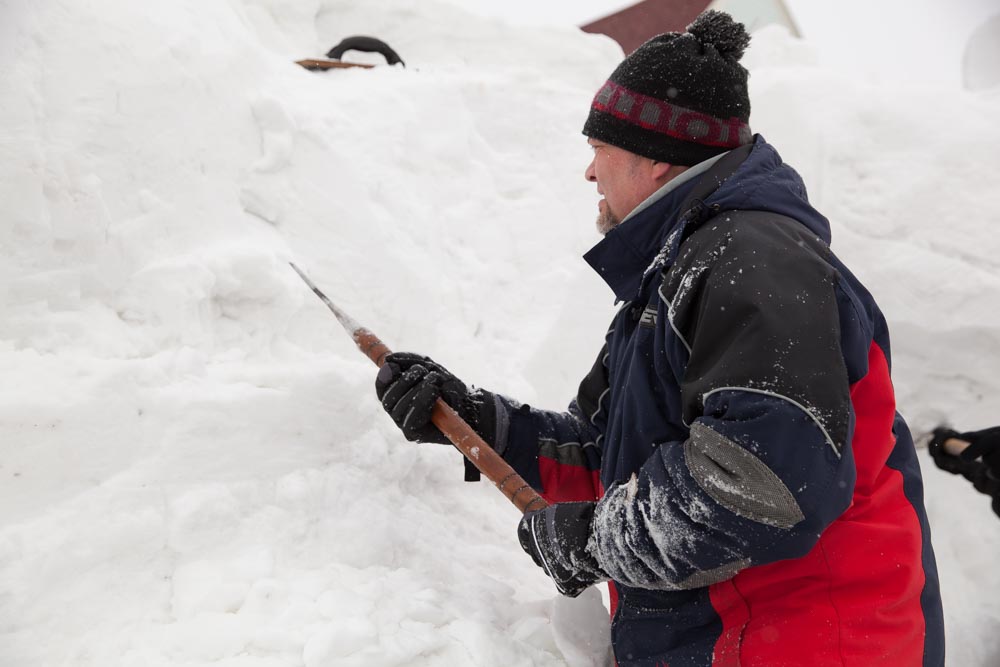 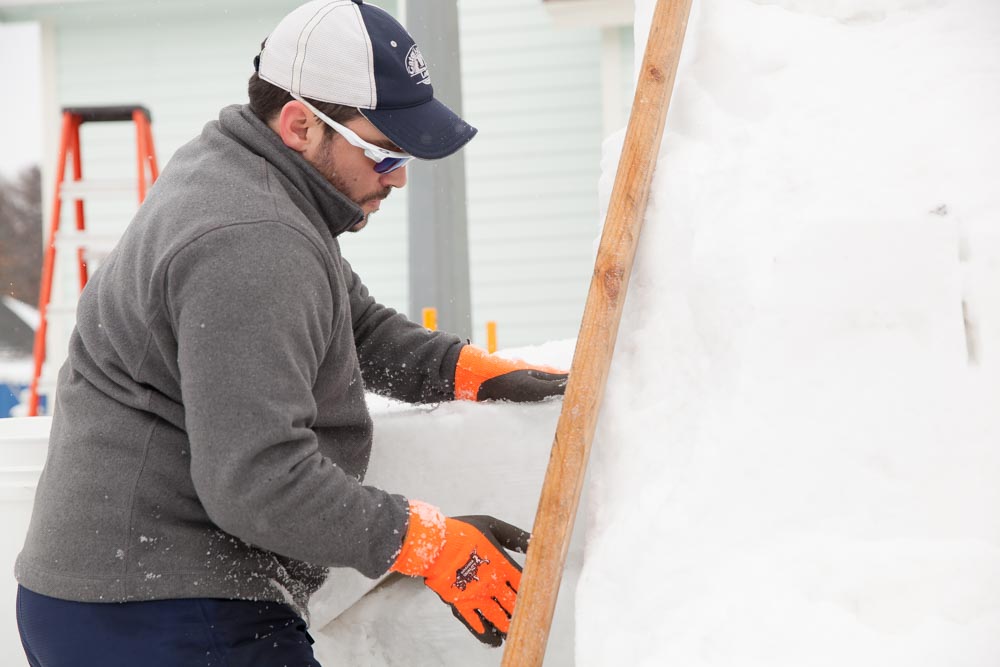 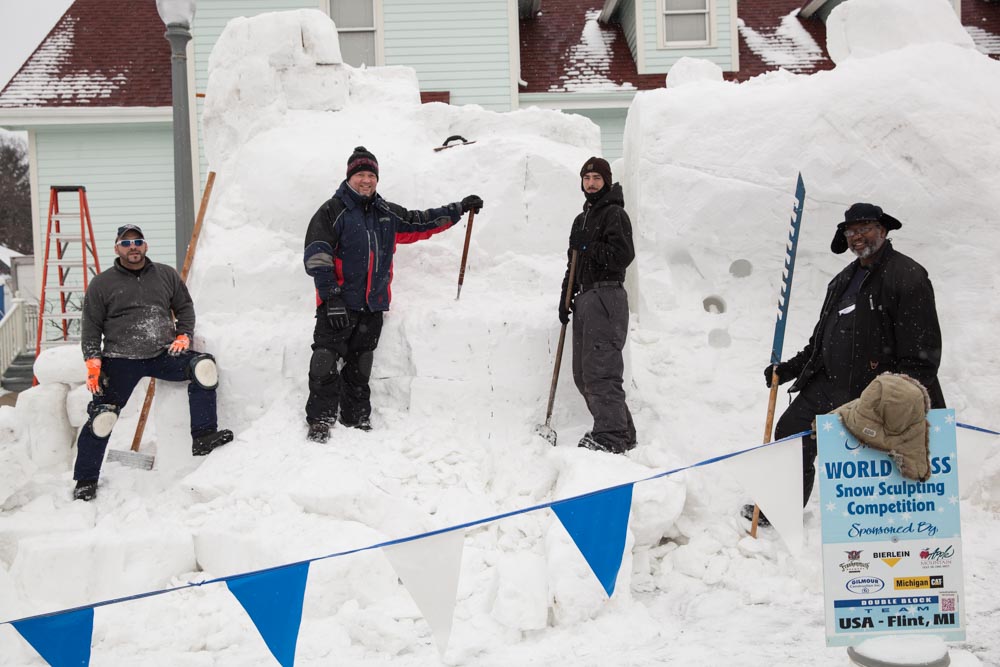 Since the team doesn’t have an opportunity to practice – after all, they can’t make 13-ton blocks of snow themselves – they must carefully conceptualize their sculpture design beforehand. “All summer we each brainstorm and then have a meeting to decide on a concept,” said Al. Gordon added, “We always sketch our concept on a grid to get a feel for how the components fit into the blocks. We do front-, top- and side-view drawings. Seeing how the elements fit into the block not only helps with the composition, it’s a crucial aid to figuring out what we can remove from the block without taking away too much snow.” However, when difficulties arise on the scene, Gordon says the team remains flexible. “Adapt and overcome. That’s the key! Being too reliant on the initial concept can be a problem. Sometimes you have to step back, look at what the snow gives you, and go with it!”

Cloudy skies are ideal for carving, since the sun can melt the sculpture’s surface even on the coldest day. “Weather permitting, you can add tons of detail. Most details need to be exaggerated to be nice and visible to spectators,” Gordon explained, adding that he and his team often add details with “packing snow,” which they make from powdered snow and water, like a snowball. Since color is not an option, Al says that the team uses different textures to provide contrast. Over the years, Team USA-Flint has become very good at their craft, and four first prizes in the past six years, including a record setting three wins in a row, are sufficient proof. “Al and I are career artists, and our collaboration on these sculptures is the highlight of my year,” said Gordon. “To me, that’s where a lot of the enjoyment of Snowfest lies: we both have a knack for reading what the other is seeing. It’s really important to ‘find’ the elements of the design within the block.”

While the carving contest is the draw for this team, Gordon is quick to say that the event is made amazing by its host. “The folks at Zehnder’s, especially Linda Kelly and John Shelton, bend over backwards to make sure all the teams, whether local or from the other side of the world, have everything they need. They feed us, house us and are always there with any help we may need. It’s a wonderful family event that has lots to offer.” With all the teams staying together over the course of the competition, Gordon says that there is great camaraderie between the snow carvers. “We’ve become friends with people from all over the world. We’ve carved with teams from China, Venezuela, Mexico, Canada, Sweden and many others. It’s a good time with fantastic people.”

Still, Gordon says that the reason Snowfest brings him back year after year is the endless challenge. “It comes down to the excitement for the concept and the challenge: to push ourselves to create something cooler than the last sculpt,” he said. Al added, “The reason we’ve done so well together is that we love to be professional about what we do. We work hard so we know in our own hearts we are at the top of our game.” ♦

The tools used by snow carvers are similar to large chisels, shovels and garden-edging tools. Team USA- Flint also has custom-made carving tools courtesy of team member Sam Licavoli. A set of interchangeable tips ranging in size from 2” to 10” have threaded rods that allow them to be attached to wooden handles for precise detail carving.