Several barriers, or at least what he was told were going to be barriers, were thrown in Chris Wilson’s way as he fought to realize his dream of playing in the National Football League.

In school, a teacher laughed at his aspirations and he was told by others he might be too undersized for the NFL. Then, the Flint Northern All-Stater found out he was ineligible to play Division 1 college football, from which the majority of NFL players are produced, and accepted an offer to play at Division 2 Northwood University. At the time, the school had not sent a player to the NFL.

“I look at coaching as a servant-type of position in which
you teach and mentor kids about anything they need help with, not just sports.”

Despite becoming a first-team All-American defensive lineman for the Timberwolves, Wilson was not taken in the NFL Draft or even offered a free agent contract, but never lost hope. More serious than ever about forcing NFL scouts to notice him, he spent two seasons making an impact with the Canadian Football League’s British Columbia Lions.

Finally, a dozen years after first picking up a football at age 13, Wilson was given a chance to make the Washington Redskins roster prior to the 2007 season. He did, and spent a total of five seasons with the team in two stints through 2012. 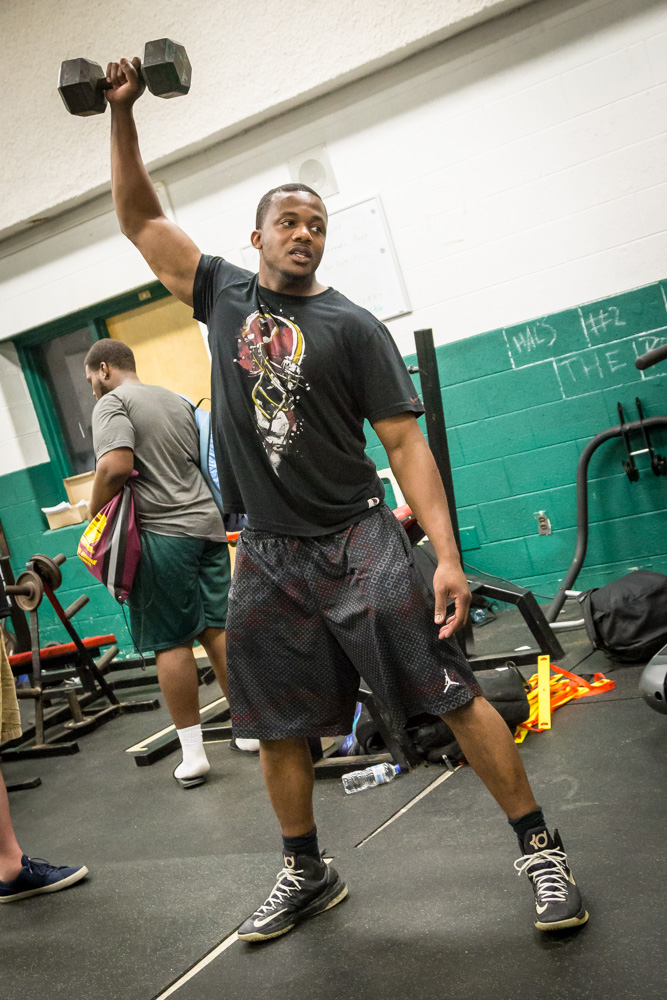 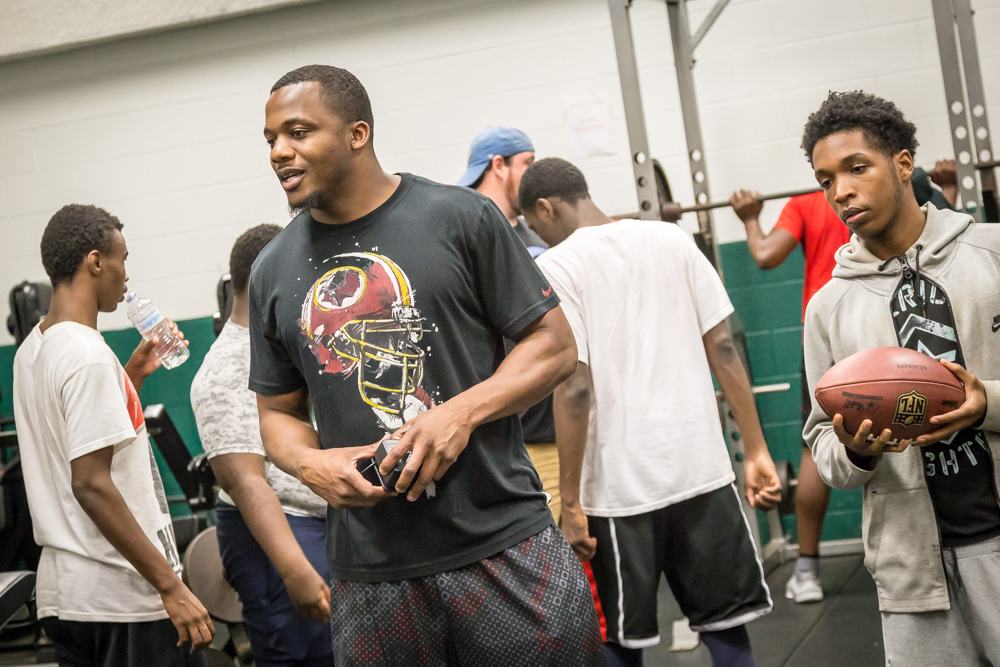 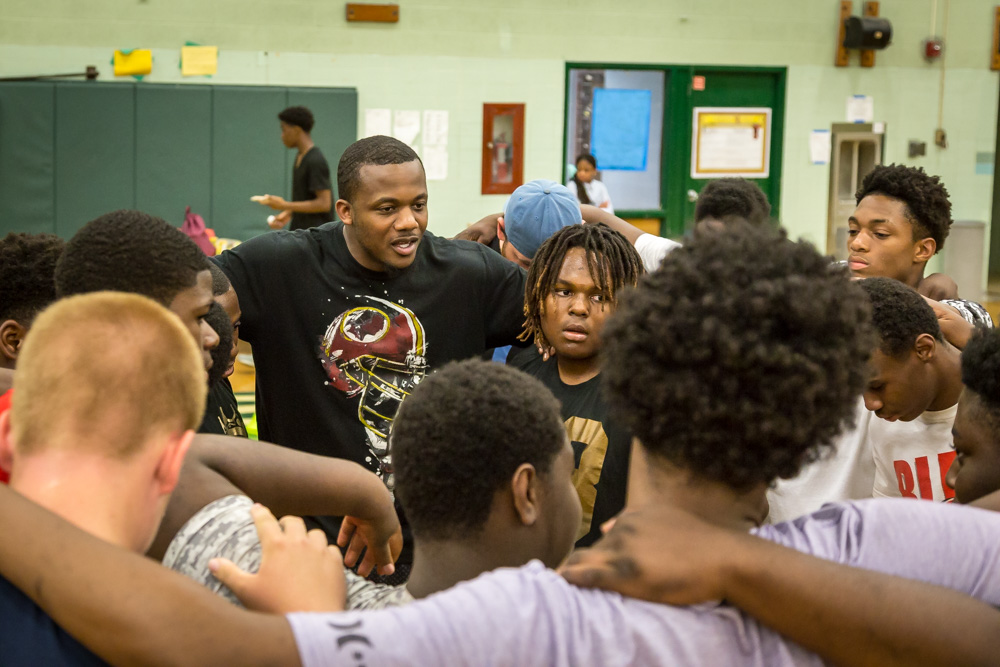 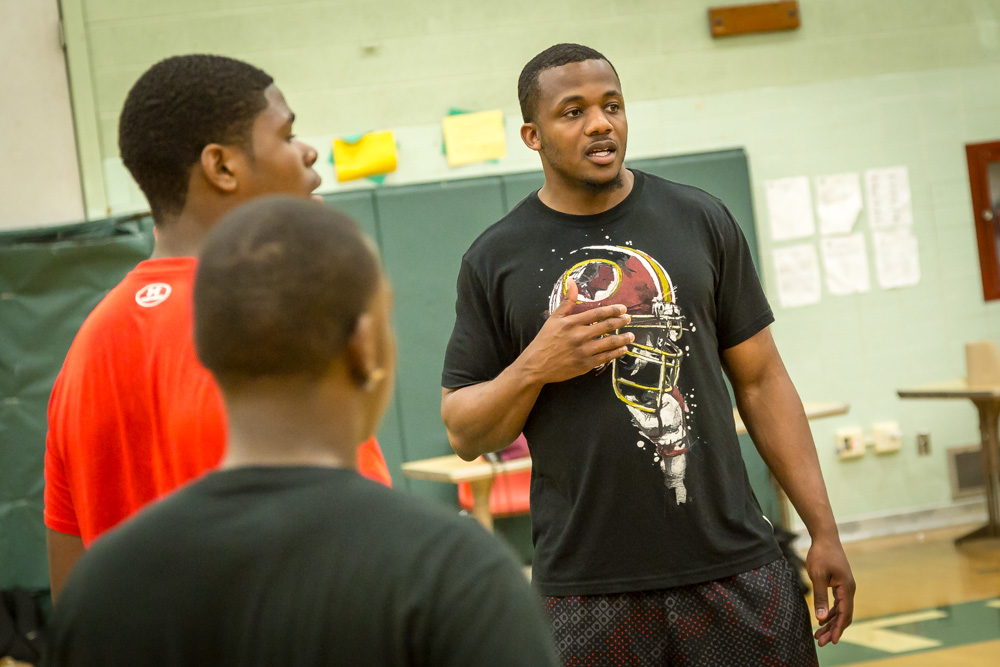 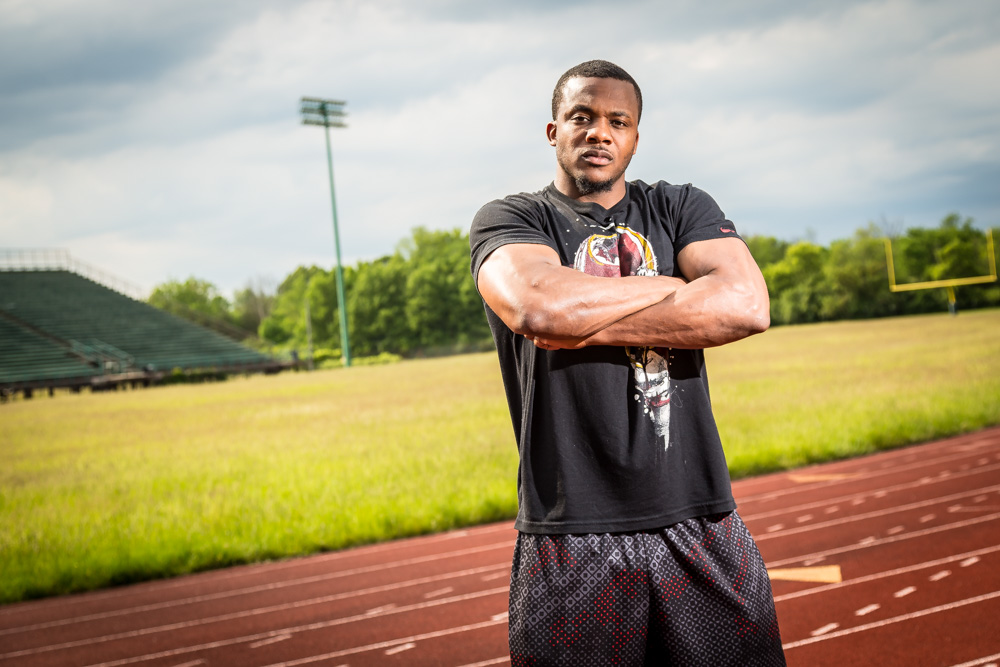 “There are always going to be people telling you things that are not true – like me not having what it takes to make the NFL,” Wilson says. “I didn’t listen to that and pursued my dream with a lot of tenacity. At the end of day, I knew I had done everything I could to reach the NFL and stayed confident. It finally paid off for me, but even if I had not made it, I would have felt satisfied because I gave it everything I had.”

With his inspiring story, deep football knowledge, relentlessly positive message and burning desire to give back to the community in which he was raised, Wilson appears to have the all the qualities every high school desires in their varsity football coach.

Flint’s Board of Education agreed.

In April, the board approved combining the athletic programs of Flint’s two remaining high schools – Southwestern and Northwestern – beginning this fall, and named Wilson coach of the unified football team. He is elated about the opportunity to instill his passion for football, chasing dreams and being a solid citizen while contributing to the community.

“I always knew I would return to Flint when my playing days were over and do something significant to give back and help the youth in the area,” says Wilson, who moved back to Flint for good in the summer of 2015 after spending two more seasons in the CFL. “I want to teach kids how important it is to pursue excellence every day, stay out of trouble and have the courage to pursue their dreams, whatever they are. Those who are champions of character and work ethic, not just talent, win championships. That’s what we want to do.”

Gary Lee, Wilson’s coach at Flint Northern, was not surprised when he heard news of his hiring.

“I knew Chris was going to succeed at whatever he wanted to do because he was so dedicated in high school and such a student of the game even then, soaking up knowledge like a sponge,” says Lee, now head coach at Flint Hamady. “There were people who didn’t see Chris making the NFL, but that kind of doubting just made him want to prove people wrong, and then he did even more.”

Wilson, who turns 35 this month, spent last season as a defensive assistant at Vermilion Junior College in Ely, Minnesota and was an assistant at Southwestern in 2015. However, he did not want to spend this fall splitting time between Flint and a coaching job in another state and began pursuing other opportunities closer to home. Fortunately for him, the best opportunity was the one closest to home.

He hit the ground running with a May 4 meeting attended by about 50 prospective players and their parents. The team’s uniforms and colors (teal and black) also were unveiled. An offseason conditioning program began four days later.

“I’m very happy with how things have been so far and we have a really good crop of kids who are buying into what we’re trying to do,” Wilson says. “I’m seeing that spark of hope and anticipation in their eyes and I’m encouraged by the way they are working. How we do next season depends on the kind of work we are putting in now. I call it making a deposit with hard work now and hopefully make a withdrawal of success during the season.”

Among those at the meeting was Levolia Thames, a tight end/safety who played at Northwestern last season.

“When I first heard that Chris Wilson was going be our coach, I didn’t quite believe it, but I love it,” Thames says. “He’s just as excited as we are about the season and we’re ready for whatever he has for us to do. We all want to improve and make Flint proud.”

Wilson and the players agree there is plenty of room for improvement. Northwestern and Southwestern have struggled to remain competitive in recent years with a combined record of just 18-108 since 2010. Both won only a single game last season. In fact, no Flint city school has made the playoffs since the now-shuttered Flint Central in 2004.

“It will take a huge amount of sacrifice from everybody – coaches, players, staff – to make progress we can feel good about,” Wilson says. “The wins and losses are my responsibility, meaning we need to put kids in a position to be successful and show them the reasons for their hard work. I feel like we are getting strong support, though, for what we are trying to do.”

Among the top players should be first-team, all-league running back Jacari Roberts, who rushed for 1,097 yards and four touchdowns in 2016. Another running back, Cortez Jackson, finished with 662 yards and made the all-league second team. Quarterback Zameer Wallace and lineman Devon Beacoats were honorable mention.

“Chris has so much energy for the game and will command his players’ attention to teach them in the right way,” Gary Lee says. “Being such a student of the game for so many years will allow him to show the kids things in a way they will understand. They are going to respond to him.”

Most logistical issues related to combining athletic programs have been resolved. Northwestern and Southwestern will remain open, but will be known as North Campus and South Campus. Football practices will be held at the North Campus, but all home games will be played at Atwood Stadium.

The North Campus also will host all soccer activities while all tennis, softball and baseball events will be held at the South Campus. Basketball activities will rotate between the sites and a bus will be available to transport players to and from both schools for all games and practices.

The biggest issue, potentially, was finding a way to bring former rivals together, but Wilson and Thames are happy to report that has not been a problem.

“I love how the players are coming together under our theme of one team, one dream,” says Wilson, who estimates there will be 30-35 players on the varsity roster. “They understand how crucial it is to work as one unit.”

Added Thames: “We are all just excited for the season, especially after the meeting where everything went great. We love the uniform colors and can’t wait to start a new era for Flint football.”

“It’s funny, because I put in plays and I’m like ‘there is that coach and there is another coach’,” he says. “A lot of them have had a great deal of influence on me as a player and human being.”

No Northwood alum has played in more NFL games than Wilson, who was inducted into the school’s Hall of Fame in 2015. He also founded the CSW Faith Foundation with wife, Sharena, in 2010 with the objective of “educating and opening avenues for students to earn scholarships, grants, and other means toward a college education.”

That has meant organizing camps in Flint, where Wilson and others have taught participants about succeeding on the gridiron and in life. “I look at coaching as a servant-type of position in which you teach and mentor kids about anything they need help with, not just sports,” he says. “It’s an honor to give back in this way.”