Having grown up in Hong Kong, Kai Fai (Ray) Lum didn’t know what to expect when, at 16, he arrived in Flint to be reunited with his father. “It was culture shock. It was language shock,” remembers Lum. “When the plane touched down at Bishop Airport, I noticed that the houses all had metal things sticking up out of the tops. I had no idea what they were until I found out that they were antenna for the TV or radio. We didn’t have TV in Hong Kong when I was growing up. It blew my mind.”

Lum attended Flint Central High School and fell in love with the automobile and its construction. After graduation, he attended General Motors Institute (now Kettering University). Lum was the second Chinese American to graduate from GMI and afterward, went on to work for Buick for 36 years. It was his decision to attend GMI – and a teacher there – that led to the founding of the Chinese Association.

In 1972, Lum was enrolled in a class at GMI taught by Dr. Ching Yu Hou. He knew that Dr. Hou was from Taiwan and one day after class, Lum approached him with a question. “I asked him, ‘how many Chinese live in this community?’ He didn’t have an answer. We checked the phone book for last names that may be Chinese and then contacted the International Institute in the city for help,” explains Lum. “Dr. Hou, Raymond Lee, Sheila Hing and I worked to put everything together. In 1972, we started the Chinese Association with about 50 members.” 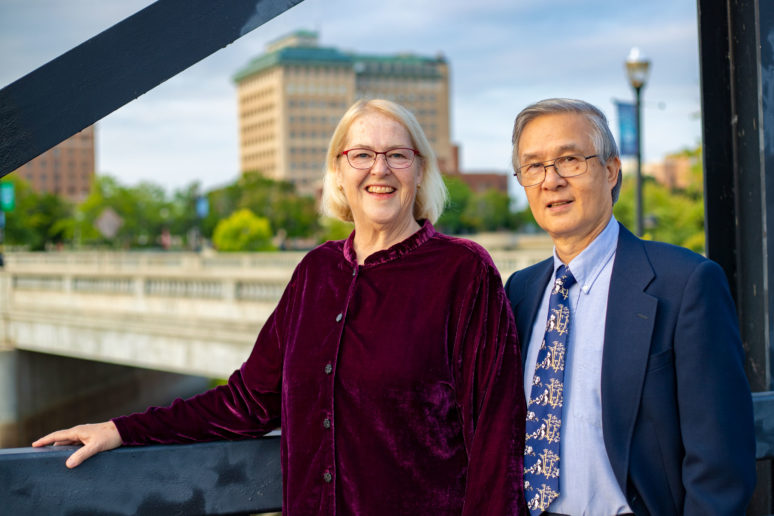 What began as a social group formed to celebrate the members’ shared heritage grew to be something more. In 1978, the Chinese Association became an incorporated non-profit organization. Lum has been a member playing different roles since the beginning, and his wife Sandy, has always helped with whatever is needed, currently serving as secretary. “The Chinese Association was instrumental in helping with immigration and providing interpreters,” she says. “We started a scholarship fund in the beginning and that continues today.” The Association also provides support to communities outside of Genesee County and to their homeland overseas. “We donated to Hurricane Katrina flood relief and we donate to the Red Cross and charities in China when we can,” adds Lum. “We helped build a school in China and received beautiful pictures and thank you letters.” The Chinese Association hosts an annual summer picnic, Christmas potluck and Chinese New Year Celebration. This year, the New Year Celebration will be held in January and typically includes a fashion show, traditional Chinese dance, authentic Chinese food such as steamed fish, duck, BBQ pork, etc., and traditional moon cakes. The celebration is open to all.

The Greater Flint Chinese population is still growing and thriving despite all of the strife the city has endured. “I have seen Flint at its highest and at its lowest,” say Lum. “When GM faltered, it hurt Flint badly. But there is a lot of hope here. The downtown transformation is amazing with all the new stores and improvements. Chevy Commons will be beautiful and Kettering is making the area wonderful. I even ran in The Crim this year and survived!” Sandy adds, “We need hardworking people to come here who want something fresh and better. International students still want to go to school here and we want to welcome them.” Lum continues, “Everybody in China still wants to come to America – it is still the land of opportunity for a lot of people. They still see freedom here. If the U.S. didn’t present opportunity, I wouldn’t be talking to you now.”