“Chasing the Dragon” is a slang phrase used by heroin addicts alluding to the pursuit of the ultimate high. But sometimes, when the dragon wins, people die.

It was February 14, 2011 when a frantic call was made to Genesee County 911 by the mother of a 17-year-old girl in Fenton. Her voice was shaking as she screamed at the operator. “My daughter was using heroin; the needle is still in her arm. I think she’s dead … I don’t know. Please! God! She’s on the floor. She’s blue. She’s cold! Oh God! Lord! Please! Nooooo!”

You could have heard a pin drop on the floor of the Linden High School Auditorium. Narly 900 students listened to the heart-wrenching 911 call played during a school-wide presentation of Chasing the Dragon on March 31. Established to make students aware of the dangers of drug use, the video and presentation emphasize the increasing number of deaths tied to heroin use.

In February 2011, two Fenton area teens died just two days apart due to heroin overdoses, shattering their families and plunging the whole community into mourning. The 911 call detailed above was placed by Eniya Jawhari, step-mother of Briona Jawhari, who died that night. Her father, Sam Jawhari, shares her story at schools all over the county, an effort that leaves him physically and emotionally drained for days. With tears streaming down his face, he relives that terrible night over and over in hopes that his daughter’s death will not be in vain – that his loss will prevent others. 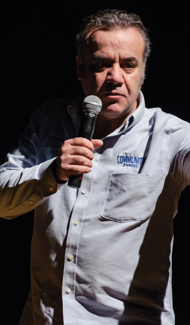 During the Chasing the Dragon presentation, Sam points to a picture of his young daughter on a video screen. She was a beautiful girl with a beautiful smile. “This is my daughter, Briona,” Sam tells the students, emotionally. “She was my first born.” He stops for a moment to gain his composure and then continues, sharing how Briona’s mom was a heroin addict who died of an overdose a few years before Briona did. He does not sugar-coat the graphic details of the insidious disease. He relates how he had never understood addiction before: he always thought addicts were losers. “But they’re not losers,” he says, shaking his head. Based on statistics, he points out that ten percent of the people in the audience likely have a genetic link to the disease. And for them it’s not a matter of choice, he reports sadly. He used to ask himself, “Why doesn’t she just quit?” But today, he knows it’s not about making a choice. “The drugs take over and you have no choices left,” he yelled. “You become a thief, a liar, you sell your body, you look in the mirror and you don’t know what you’re looking at.” With tears in his eyes he points at Briona’s picture once again and asks, “Does she look like a loser? Does she look like a loser? I did everything in my power to protect my daughter but I couldn’t. It was somebody she loved who put that needle in her arm … it’s people they know or love who get them started.”

Sam said that after losing his daughter, he just couldn’t stay quiet any more. “It’s happening everywhere – Grand Blanc, Byron, Fenton, Goodrich and in every community. It’s an epidemic and it has to stop!” he exclaims. He pleads with the students to join him. “Let’s make a difference together! There are too many kids dying and I’m asking you today to become warriors! I lost my child. I’m telling you to say ‘no.’ I don’t want your parents to feel my pain.”

Addiction turns the lives of a family upside down, and the Jawhari family went through what Sam describes as “years of hell.” Briona’s mother overdosed when Briona was in the eighth grade; she wrote a poem about not wanting to go down the same road as her mom, her father recalled. But she did. Life was a series of treatment centers, hospitals and court appearances. Briona would periodically cut classes and run away from home for days at a time, leaving Sam in the dark as to her whereabouts. He was frustrated, and often felt let down by the court system and by law enforcement. It seemed as if his hands were tied and everywhere he turned for help, there was only more red tape.

Briona first went to rehab when she was 14, one of her many attempts to beat the dragon; but it was never long before she would use again. Things got so bad at one point that Briona went to live with relatives out of state. There were more court appearances, a tether, more rehab, and foster homes. Finally at 16, she returned home and went to a Dearborn rehab facility for four months. Things got better for a while. “I just had so much anger all along the way,” says Sam through tears. “I just didn’t understand addiction.” When she turned 17 in 2010, Briona moved out of Sam’s home. The only time the family saw her was at a family gathering. She came over on Christmas Eve and left Christmas Day, Sam remembers. In January 2011, Sam received a phone call: “Daddy, I overdosed. I want to come home.” So three weeks before that fateful 911 call, Briona came back to the Jawhari home for the final time.

Sam says he is overwhelmed by the number of people whom Briona touched in her short life and by the people who were there to support the family in their darkest hour. He also remembers all of those who pushed him to share his experience publicly and work toward drug-free schools. A few days after Briona’s funeral, then-Genesee County Commissioner Joseph Graves stopped by the Jawhari’s restaurant in Linden to offer the family his condolences. “Joe, we’re losing too many kids,” Eniya Jawhari told him. Moved to action, Joe contacted Sheriff Robert Pickell, who suggested he reach out to Undersheriff Chris Swanson, who was putting together a drug awareness program called Chasing the Dragon. Sam was asked to speak at the first presentation of Chasing the Dragon, one month after he lost his daughter. Since then, 40 presentations have been given at schools throughout Genesee County.

Other community leaders, including Tony Brown and Bob Krug, came up with the idea to form a support group for parents. This led to the creation of Community Parent, an organization in which community members come together to raise awareness of the growing drug use epidemic. Partnered with the Genesee County Sheriff’s Department, the city of Flint, Fenton, Argentine and other local police departments, Michigan State Police and the FBI, Community Parent offers support to families of addicts and provides information about where to get help.

Chasing the Dragon presentations make a profound impact on the students who see it. “If we can help just one person, it’s worthwhile,” says Sam. “This isn’t easy for me, but these kids are our future. We owe it to them.”