Since 1919, Kettering University has been training engineers, managers, designers and technicians. With Flint’s automotive history, it seems fitting to include a lab dedicated to car crash safety. However, the first crash safety course was not offered at Kettering until 2001. The Crash Safety Center opened in August 2005 in the Mott Science and Engineering building, bringing together university life, industry, and community members, such as doctors and K-12 students. The only lab in the world that extends its services to undergraduate courses, it celebrated its tenth anniversary in August. Much has been accomplished in the past decade.

Dr. Janet Brelin-Fornari is a professor of Mechanical Engineering, as well as the director of the Crash Safety Center, and she focuses her research on child car seat safety. Coming from this crash safety background, Dr. Fornari and others involved in the lab are working toward having consistent, federal standards for side-impact safety in child car seats. 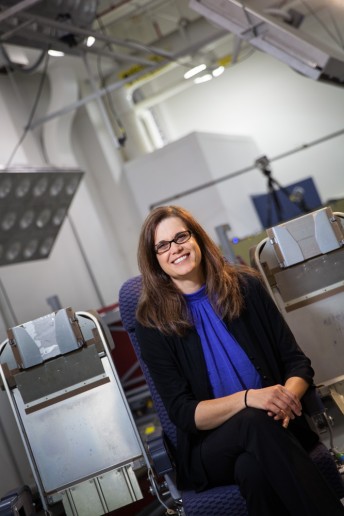 Working with Dr. Patrick Atkinson, another professor of Mechanical Engineering, the study of crash safety combines mechanical engineering with bioengineering. Throughout their research and testing, they found with their industry partners that they would prefer to have “a mechanical engineer who knew something about the human body and how it works as a system,” says Dr. Fornari. Along with Flint’s automotive history, learning about crash safety easily fits as part of automotive engineering, as well as bioengineering. For example, many medical students have to do a one-month internship, and some choose to do that through Kettering University.

Many different types of labs and classes at Kettering that deal with aerodynamics, automotive, design, 3-D printing, and manufacturing techniques allow students to experience their studies with a hands-on approach. “Having a crash lab really helped other aspects. We don’t just stay in our area and do research. We work with the students, and the students work with us,” Dr. Fornari says.

The lab is comprised of different components; the first is the ATD (Anthropomorphic Test Device) – commonly called a crash test dummy – which helps measure how velocity and acceleration of a crash affect a human body. The dummies vary in size to represent a range of vehicle occupants. They are designed not to break, but to measure data – the level of impact that is too much impact on the body. The dummies were developed in the 1970s based on the height and weight averages of the adult population. Models include the average-sized 12-month-old child, three-year-old, six-year-old and ten-year-old child, a small adult female, and the main dummy used in the industry, the “average” sized male, which is 5’10” tall and 175 pounds. Multiple instrumentation channels measuring acceleration, forces, moments, and displacements are used for each test.

The Kettering lab can measure vehicle impacts from the front, side, or rear, as well as testing airbags, seats, seat belts, and child seats with front and rear seat occupants.

For every test, they can measure several different criteria. One criterion is the Head Injury Criteria (HIC) which is based on vehicle acceleration. Federal regulation mandates that the HIC value has its threshold for risk of injury to the occupant for frontal impact testing. However for side impacts, the assessments to establish the threshold are still being evaluated.

Researchers also use field data from actual collisions; they look at what precisely happened to the vehicle and the passenger’s reported physical injuries, and find trends.

In addition to everyday vehicle measurements, the Kettering lab has also tested Humvee seat belts, seats, and equipment panels for the military. With the military vehicles, they tested new equipment and how it will interact with a passenger in a collision.

Doctors from McLaren Hospital came to the lab to do research, and found out how small details of car design can affect a passenger. “There’s a lot of give and take with safety. You hear about airbags actually hurting people instead of helping them,” Dr. Fornari says. “If they’re not designed correctly, they can be detrimental. That’s one of the issues and that’s what the doctors saw really quickly.”

The other component of the lab is the vehicle test track itself. The deceleration sled is their largest piece of testing equipment. Running on pneumatic power (air compressor) and hydraulics, the deceleration sled can carry a 2,000lb payload up to 42 miles per hour. It is set up so researchers can look at the vehicle occupants and how they react to an impact. Tuned to different scenarios, standards, and specific car types, it mimics what happens during the crush of a vehicle.

Giant lights positioned above the deceleration sled impact point record high-speed video (which comes out in slow motion), up to 1,000 frames per second. Cameras on the side and overhead record airbag deployment, how a child’s body moves in a seat, and how the child seat performs. The videos are used to test the Federal Motor Vehicle Safety Standards (FMVSS).

“We don’t just stay in our area and do research. We work with the students, and the students work with us.”
Dr. Janet Brelin-Fornari 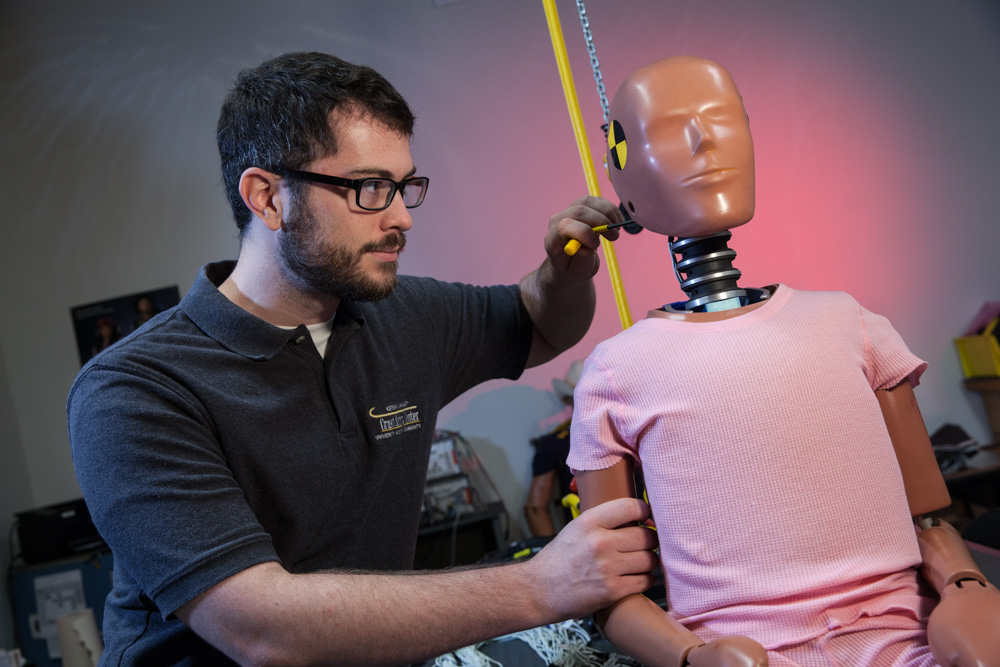 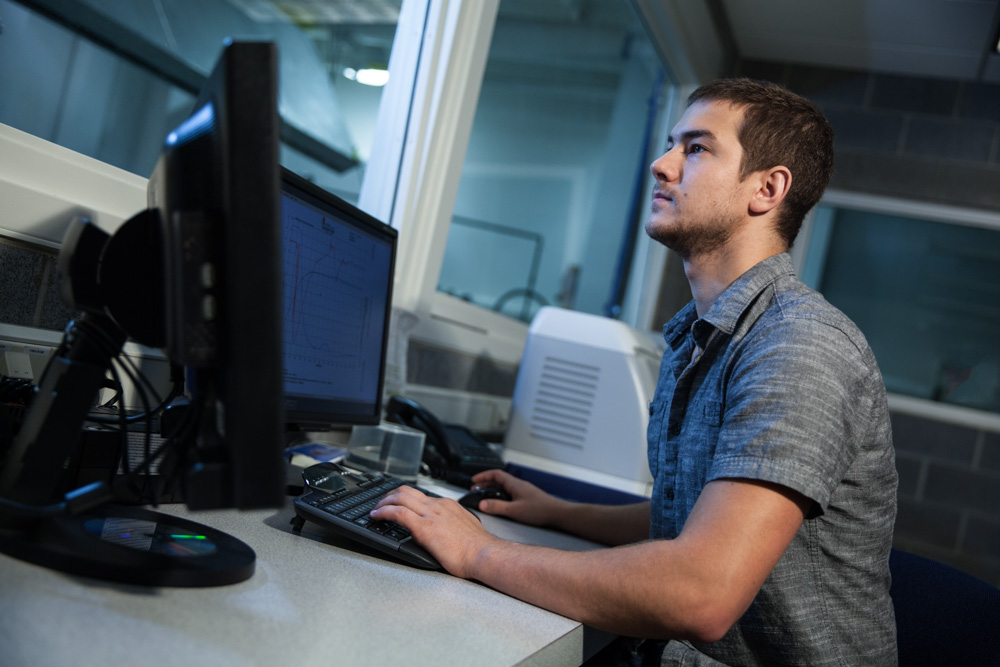 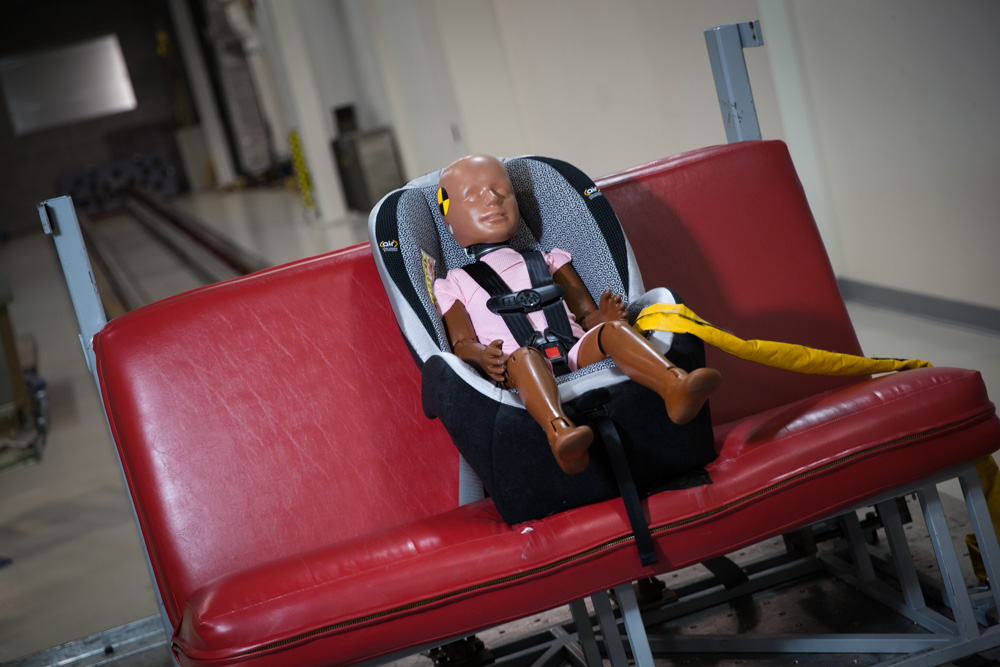 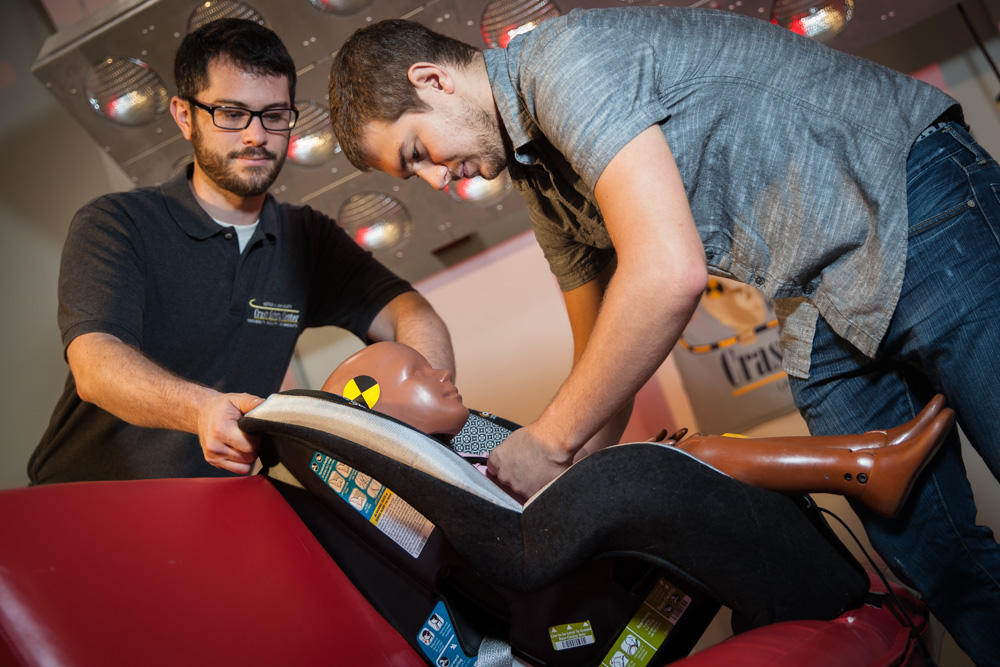 Sheryl Janca, a Research Engineer at the Crash Safety Center explains how the computer system reads out the information. All the different wires plugged into the dummy send info to a data acquisition system that is attached to the deceleration sled. The system records the data and sends it to the computer screens. “It downloads to a computer system inside,” Janca explains. Software will manipulate the data to get a resultant calculation, which becomes a curve on a graph. “Once we gather the data, we use the software program to see what the results are,” says Janca. Some injury limits are actual laws, like the ones established for adults. Currently, there are injury limits for child seats in frontal testing, but not side testing, which is why additional research is underway at Kettering.

Janca, Dr. Fornari, and other researchers have worked with National Highway Traffic and Safety Administration (NHTSA) on a 2.5-year project to develop side-impact regulation for child safety seats which looks at head acceleration and head containment. This project is currently in Notice of Proposed Rule Making (NPRM) and has not yet been released as an official regulation. Currently, NHTSA is evaluating comments from the industry or the public with concerns or questions about the rule. The goal of NHTSA to make sure that no matter what crash safety facility is used to test the proposed standard, it has consistent results. Their goal is reproducibility and repeatability between the facilities.

Due to the fact that child proportions are different than adults, Dr. Fornari’s research is dedicated to making car seats more effective. “There is no side impact standard for child seats right now. It doesn’t exist. One of the biggest issues was there wasn’t a child dummy that could be developed,” Dr. Fornari explains. “You can’t just take the risk of injury criteria for an adult and size it down.” According to Dr. Fornari, anything on the market right now passes the FMVSS 213 child seat frontal crash standards. However, for several car seat brands, the label notes in-house standards for side impact, not federal standards.

K-12 student seminars come on campus to not only see what is done in the Crash Safety Lab to promote studying math and science, but also to promote safe driving practices, like the dangers of distracted driving or not wearing a seat belt. “Seeing it visually and hands-on can really bring these concepts home,” Dr. Fornari says. The lab has also hosted Safe Kids Worldwide, an educational program that provides training on proper installation of child seats. Janca is one of the many faculty members who are certified child seat installation inspectors.

By the end of 2016, researchers working on this project are hoping to begin phasing in the standard, which usually takes about three years, until 100 percent of the product is meeting the standard. “This has been out there long enough that I’m hopeful the industry will be able to meet the standard quickly,” Dr. Fornari shares.

The education aspect of having any lab dedicated to crash safety is very important; the Crash Safety Centerat Kettering not only educates students, but also doctors and the community as a whole. This innovative, hands-on approach is what has made Kettering so successful throughout its history.