May is National Barbecue Month and people all over Genesee County are firing up their grills! In the meantime, there are some really great barbecue restaurants in Greater Flint that will do the cooking FOR you, offering down-home, mouth-watering ribs, beef brisket and pulled pork served with a wide array of delectable side dishes and a slab of cornbread. Here’s a taste! 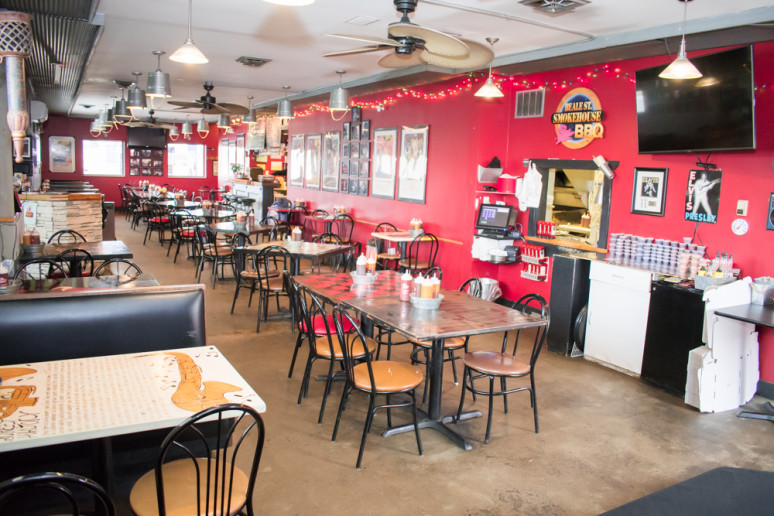 Since 2006, this is the place for real, Memphis-inspired barbecue, according to Lisa Kimbal, who co-owns the eatery with her father, Phil Canup. The Southern-style ribs, brisket, chicken and pork are seasoned with a dry rub and smoked on the premises with seasoned hardwood, which gives it their signature smoky flavor.

Most popular is the pulled pork, which is juicy, moist and delicious, says the owner. There are four house-made sauces to choose from: house, spicy, gold and sweet. The delicious meats are accompanied by a variety of side dishes, including: mac & cheese, smoked baked beans, collard greens, sweet potato fries and garlic mashed potatoes. But, what really keeps customers coming back is the Northern-style cornbread slathered with honey-pecan butter. “Our customers love our cornbread,” Lisa reports. “It’s huge!” The restaurant also offers a variety of tasty, down-home food including specialty sandwiches, burgers and salads.

Beale St. is also proud to offer a wide variety of Michigan craft beers on tap and bottled, as well as domestic beers, wine and liquor. The casual restaurant features live music on Fridays and Saturdays, mostly Blues. “We love to see our friends come in to enjoy some good food and good music!” Lisa exclaims. 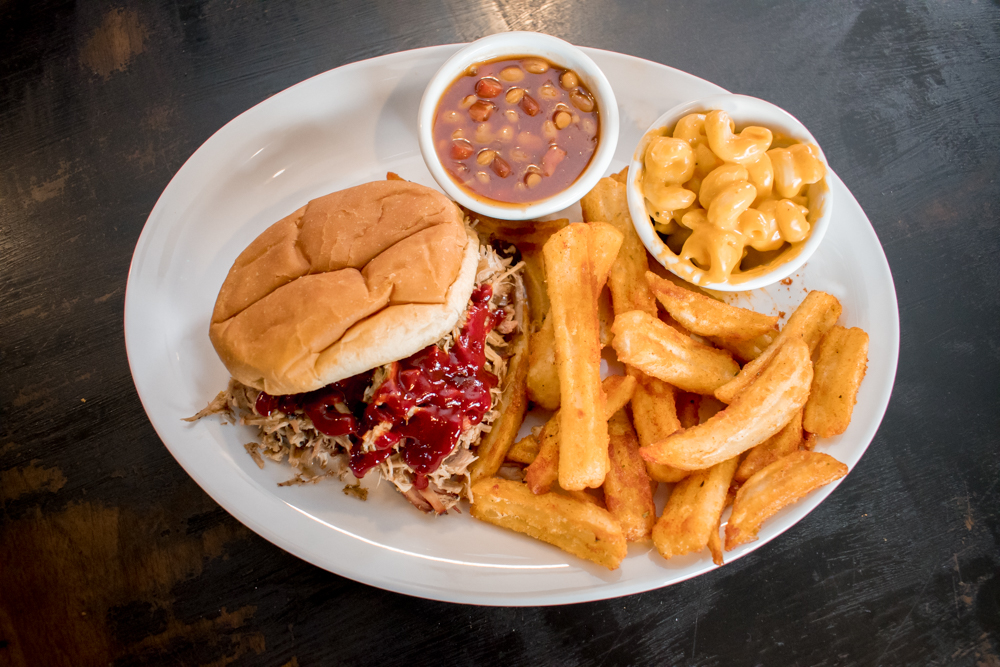 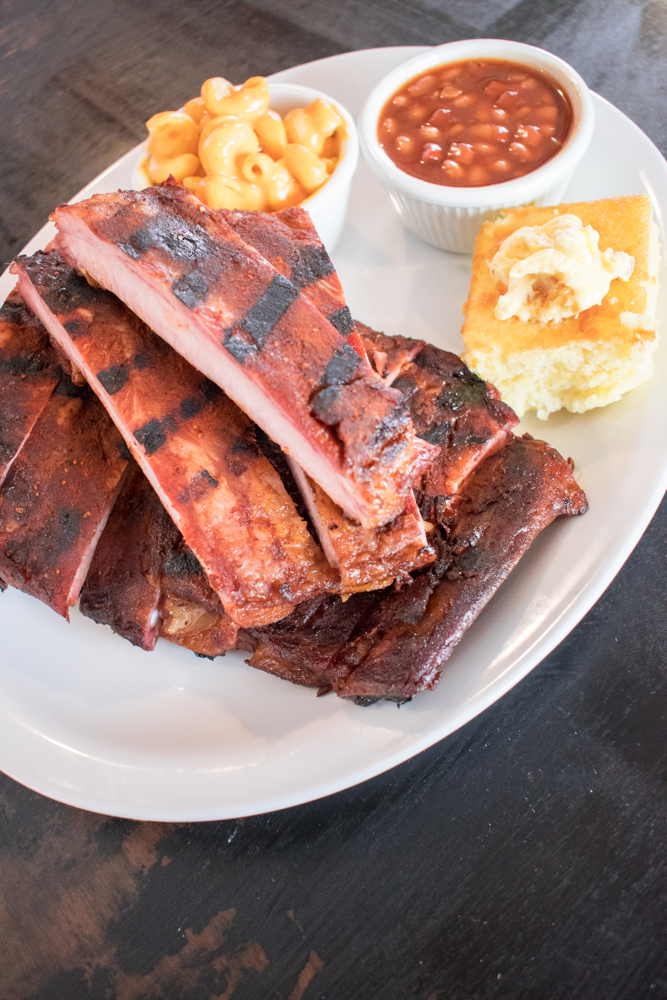 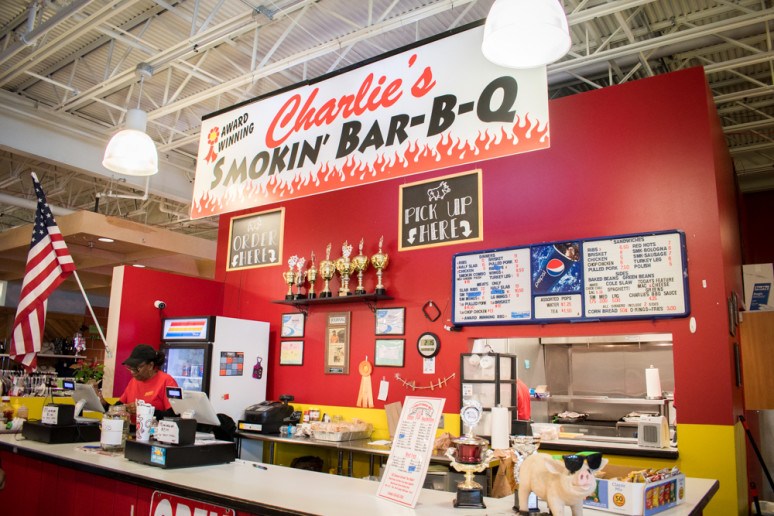 Owned by Charlie and Sandra Weston, Charlie’s Smokin’ BBQ was a popular vendor at the old Flint Farmers’ Market location prior to its 2014 move to East First Street. Charlie is the cook. “He smokes everything himself,” says Sandra. “He has a loyal following of customers from as far as Grand Rapids, Lansing and Saginaw.”

The most popular meal at Charlie’s Smokin’ BBQ is the tender beef brisket dinner, and the brisket and pulled pork sandwiches. “Charlie’s ribs are award-winning,” says Sandra. “Our food pales in comparison only to our warm and friendly customer service.” 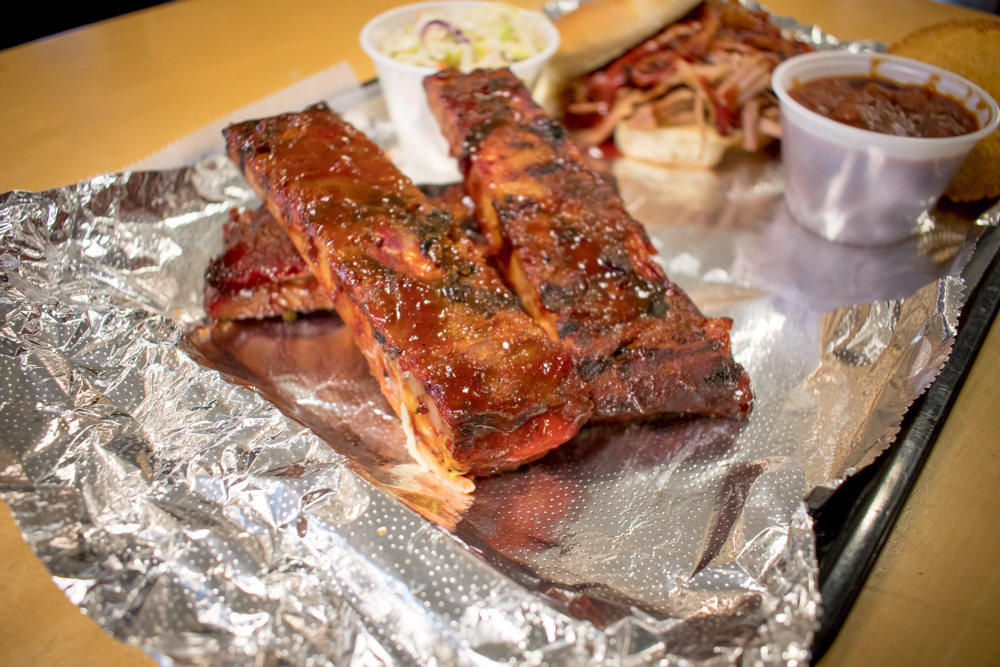 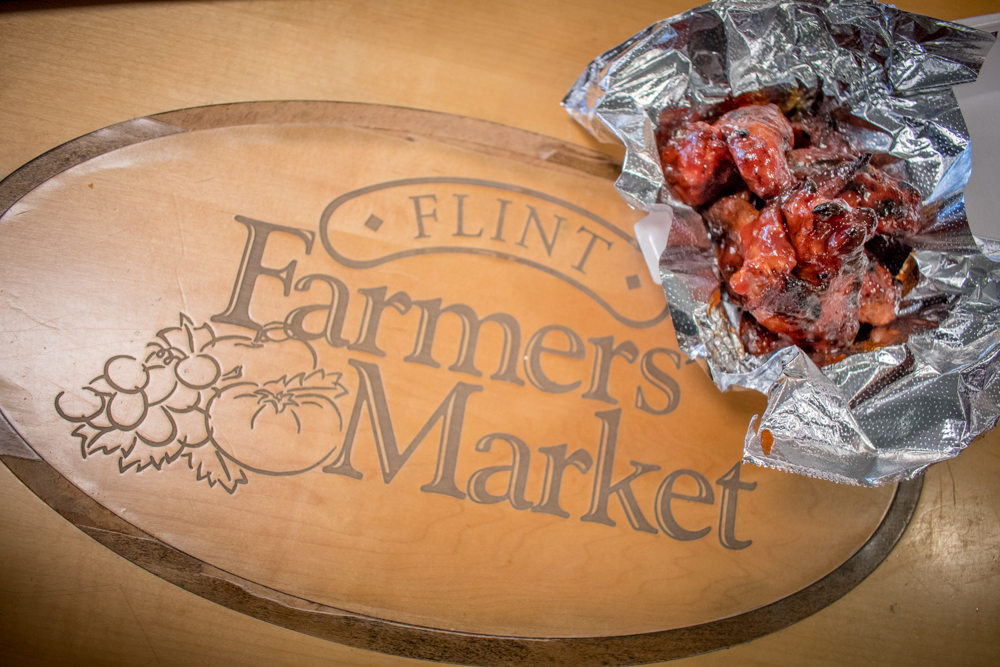 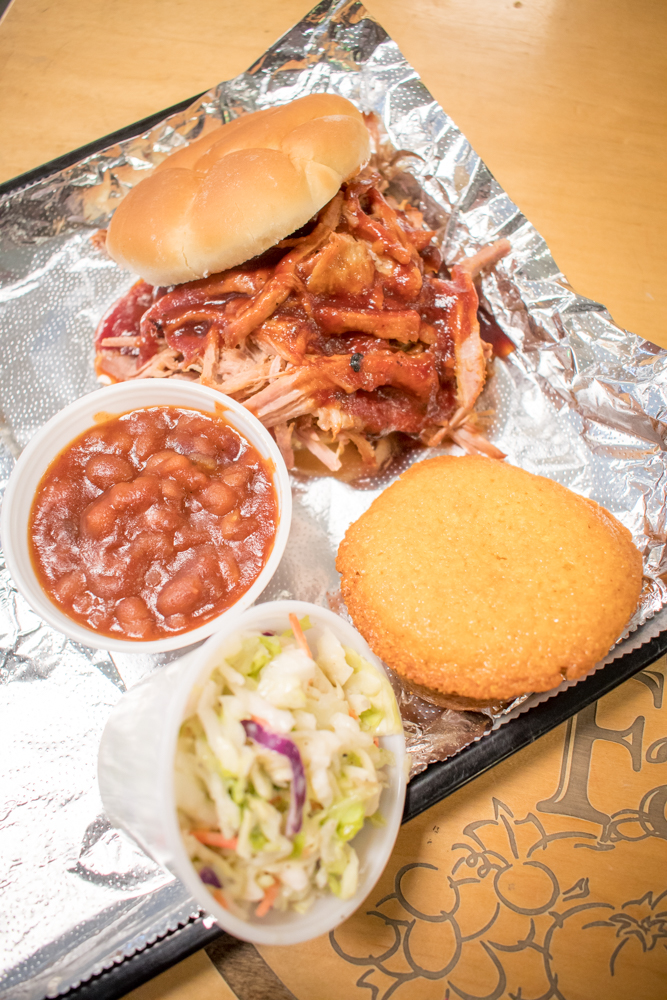 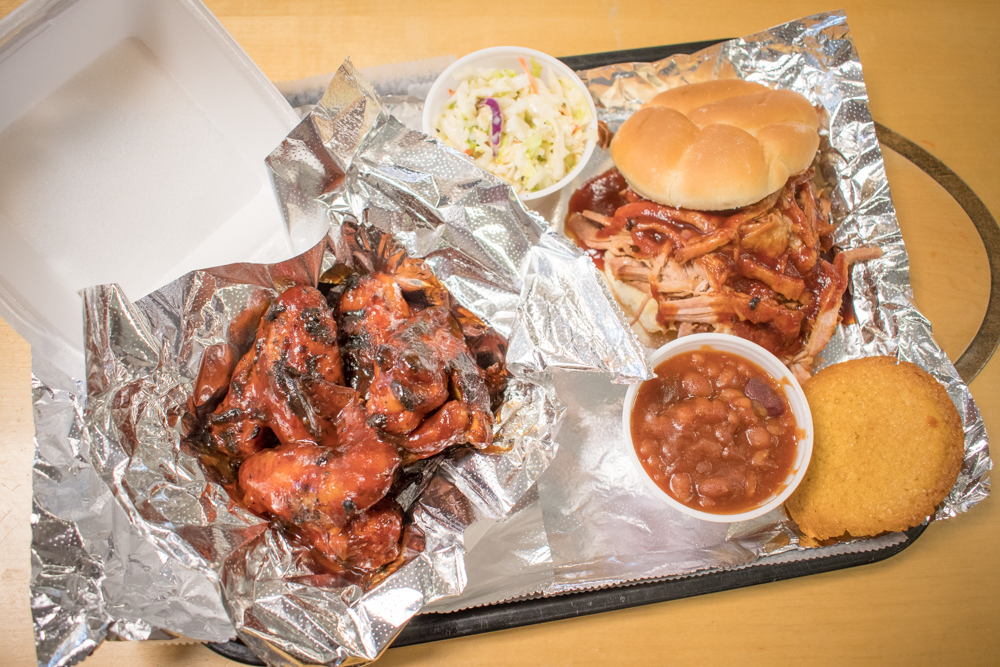 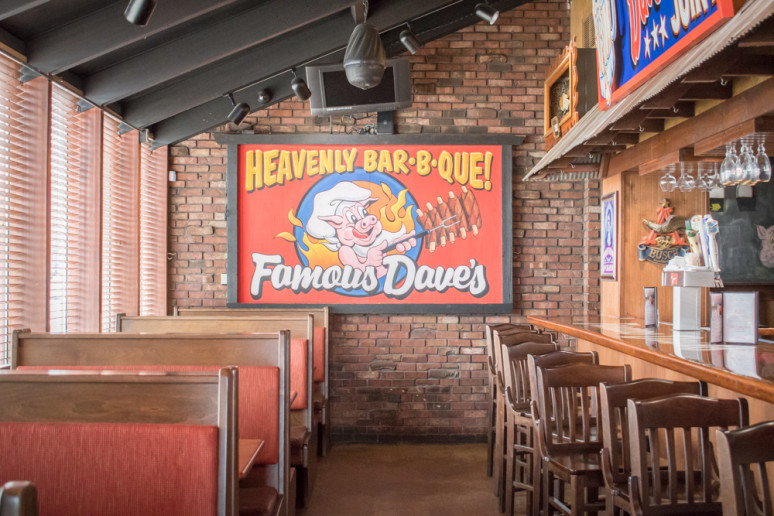 However, it’s the cornbread that the customers love. “Our cornbread muffins are the most talked about,” says the general manager. “People just love them. We make them fresh all day long!” People also love the homemade bread pudding served with praline sauce, ice cream and whipped cream. “There are many other options to choose from, but our customers come for the barbecue,” says Harris. 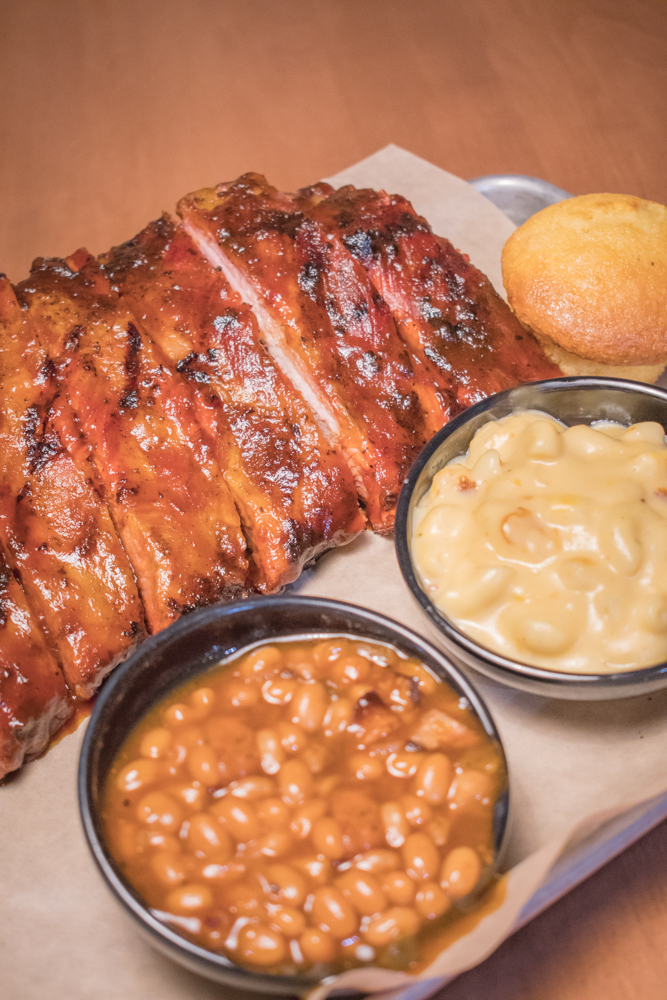 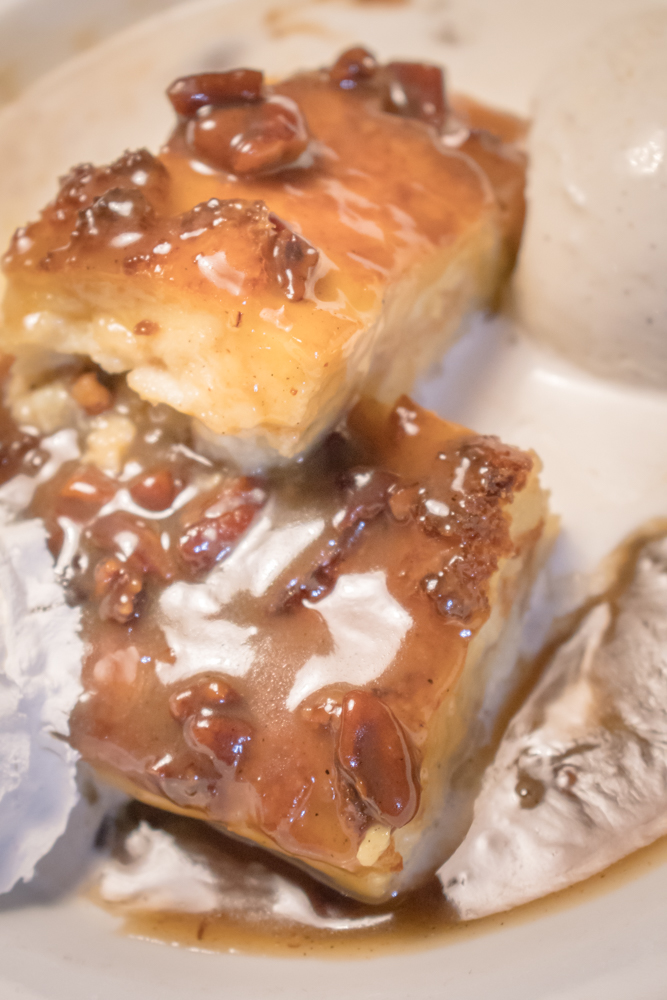 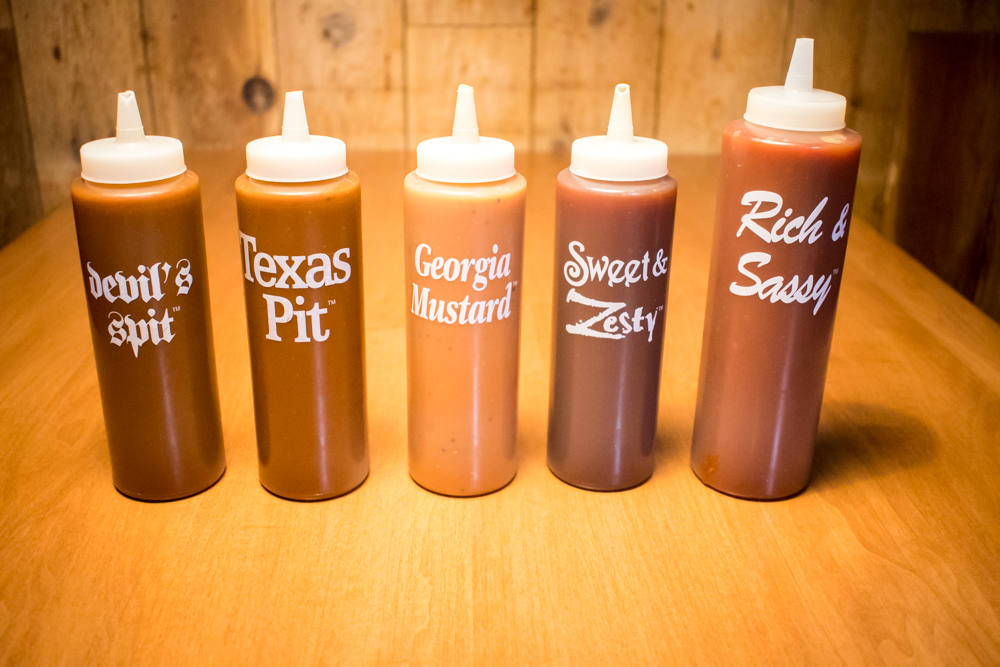 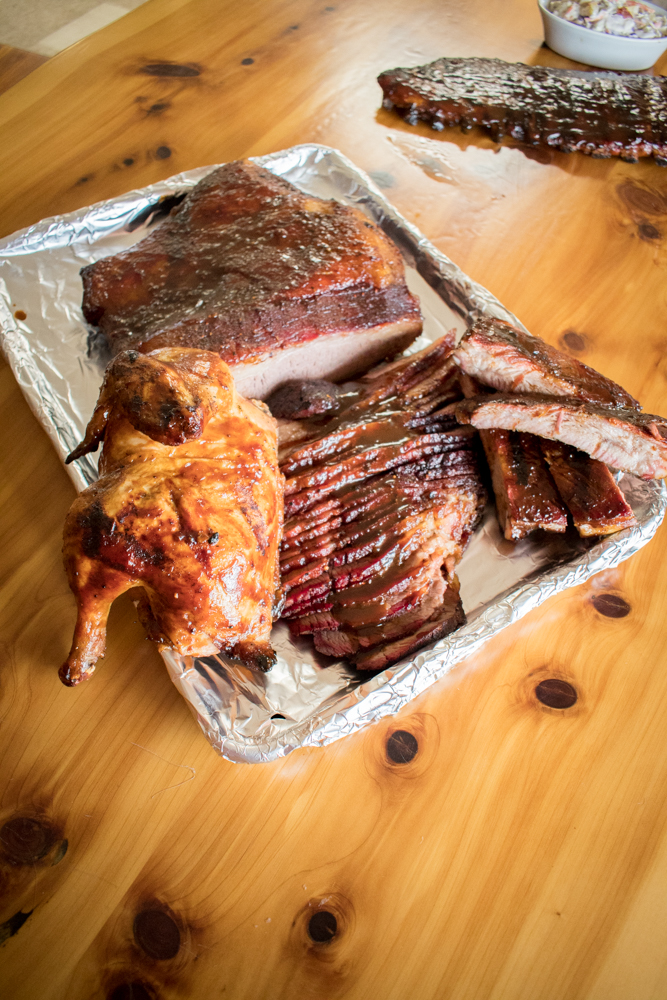 Larry Kimball, owner of Homeboy Barbecue, is exactly that, a home boy born and raised in Flint. After traveling the barbecue circuit all around the country, Larry met his wife, Marina, and they settled down in the Flint area, serving Southern barbecue since 2004. “They were making bets that I wouldn’t last three months, but the locals kept me in business,” he laughs. And it’s the beef brisket that keeps customers coming back. “Brisket is my specialty,” Larry boasts. “I was trained by the best in the world.” Homeboy Barbecue also serves delicious ribs, pulled pork and chicken, which is slow-cooked and then grilled. “Our customers love my chicken,” Larry says. “They call me ‘Chicken Man.’”

Also on the menu at Homeboy are some memorable sides including: Mama’s mac & cheese, Southern slaw, baked beans, BBQ spaghetti, cheesy taters, red skin tater salad, not to mention the cornbread. They are also well-known for a meal appropriately named the Vegetarian Nightmare – ribs, chicken, pork loin and brisket. And, you can’t leave Homeboy without trying one of their special desserts: cookies, homemade pineapple cake, and the best brownie you’ve ever tasted. Homeboy Barbecue is open Wednesday through Saturday. 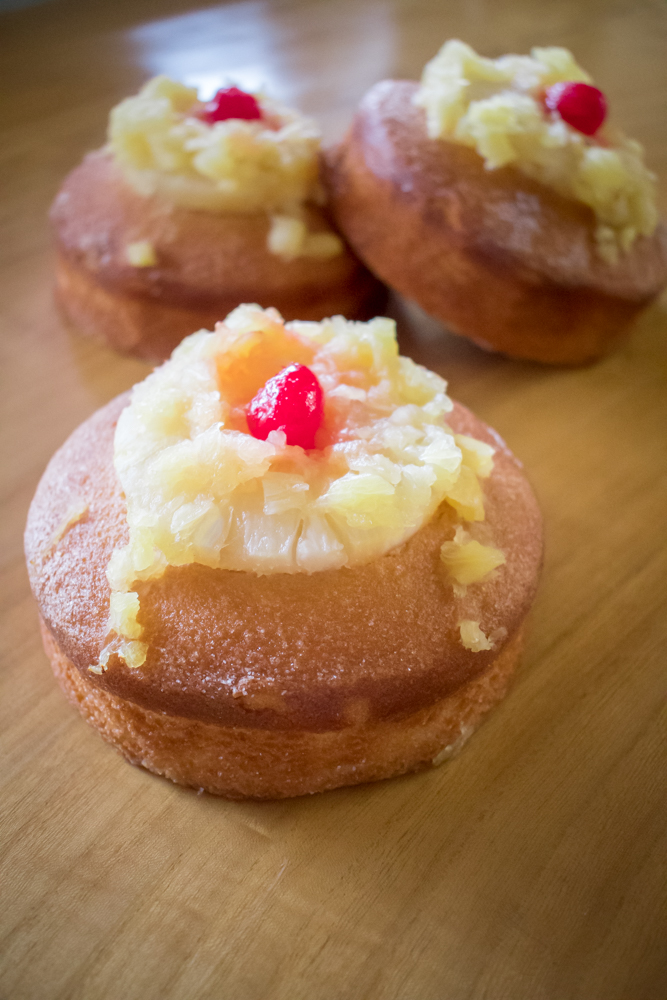 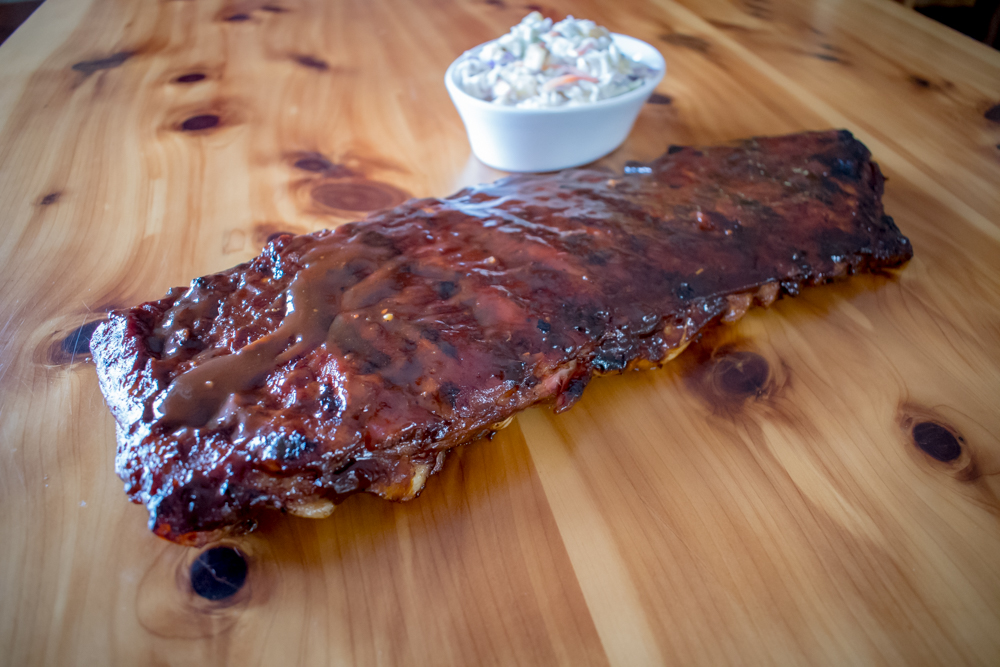 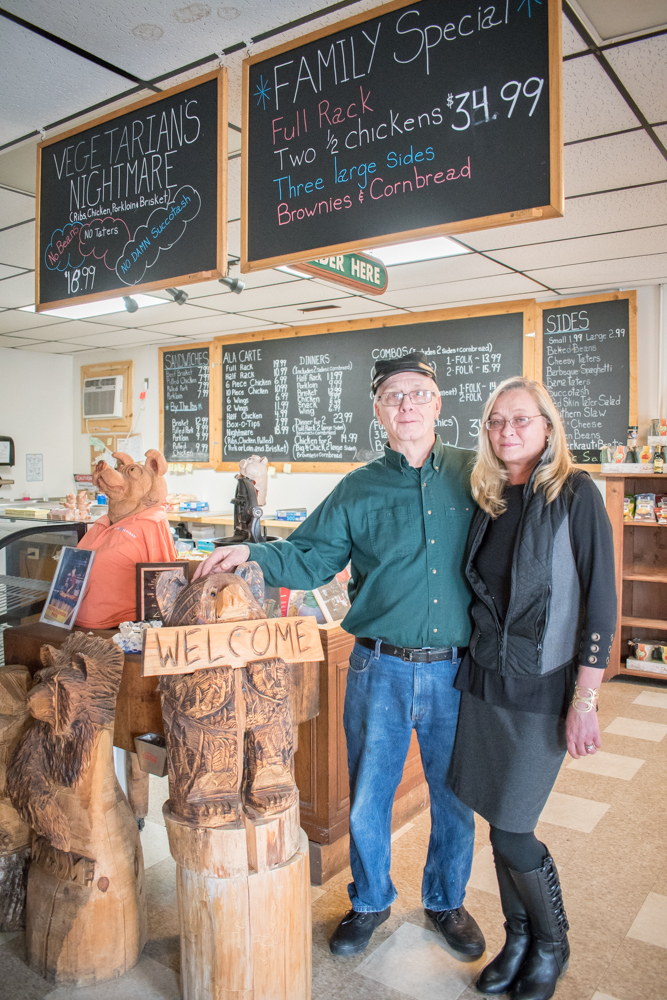 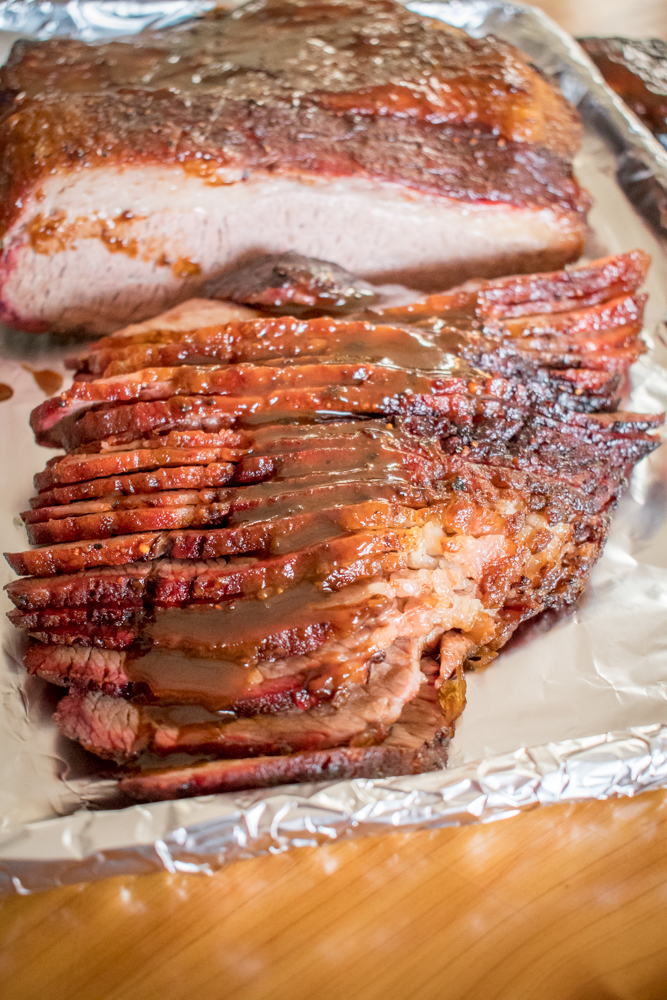 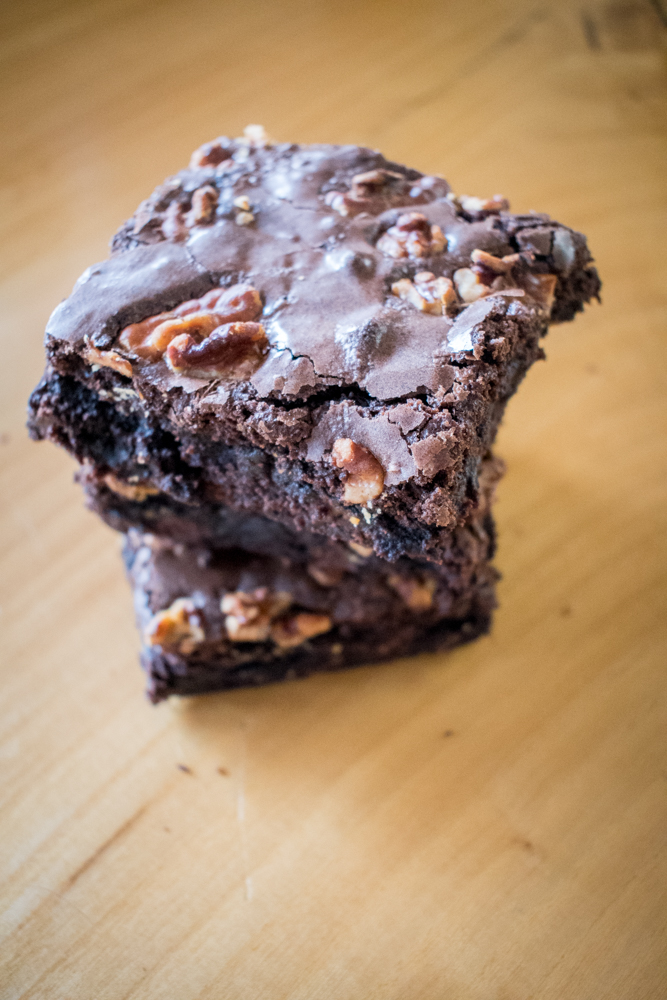 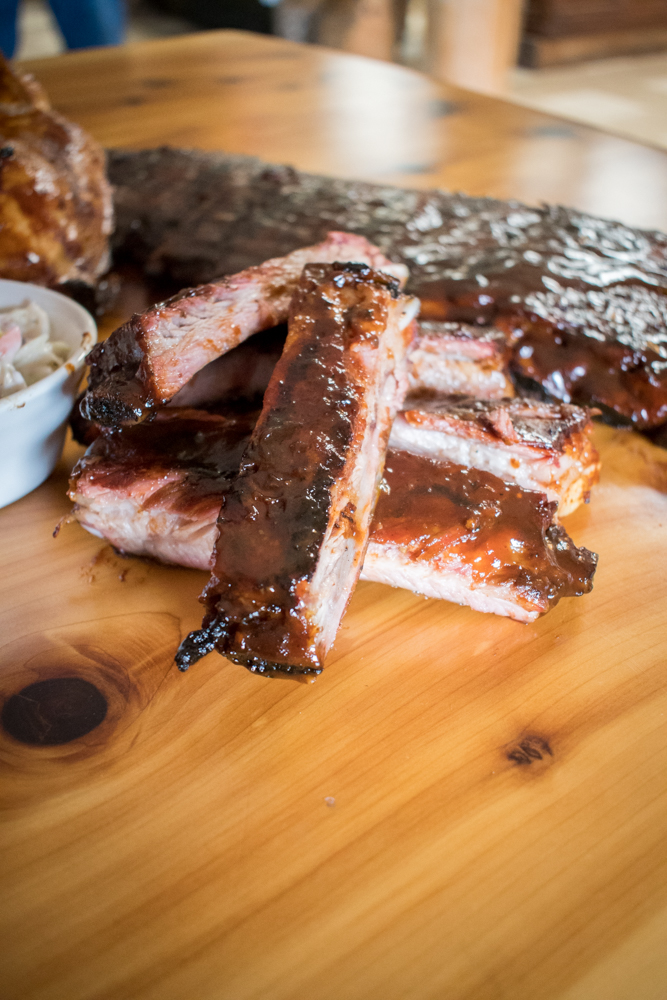 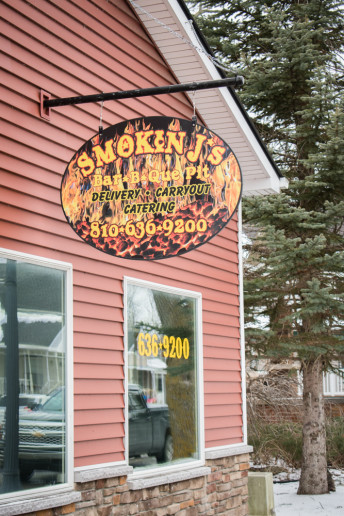 Owned by Jeff Kenyon, what started as a small carryout operation is now a full-service restaurant and bar serving down-home, authentic barbecue smoked in-house. According to longtime employee, Krista Bauman, Smokin’ J’s is well-known for their delicious St. Louis-style ribs, beef brisket, chicken and wings. Most popular are the beef brisket and the smoked chicken wings. “We sell tons of brisket,” says Krista. “And, I highly recommend the smoked wings. I think they’re the best around.”

Smokin’ J’s offers 20 different side dishes, including favorites such as fried okra, baked beans, mac & cheese, and corn nuggets. And, there are several house-made sauces to choose from, including Sweet & Smoky, Tennessee Bourbon, Hell Fire (very hot), Carolina Yellow, and Pig Sauce (sweet chili). The menu also features burgers, sandwiches, catfish, fish & chips and shrimp, but it’s the barbecue that draws in the hungry diners. “Everything is delicious and made from scratch here,” Krista reports. “It’s a very homey restaurant and a great place to eat. It feels like family.” 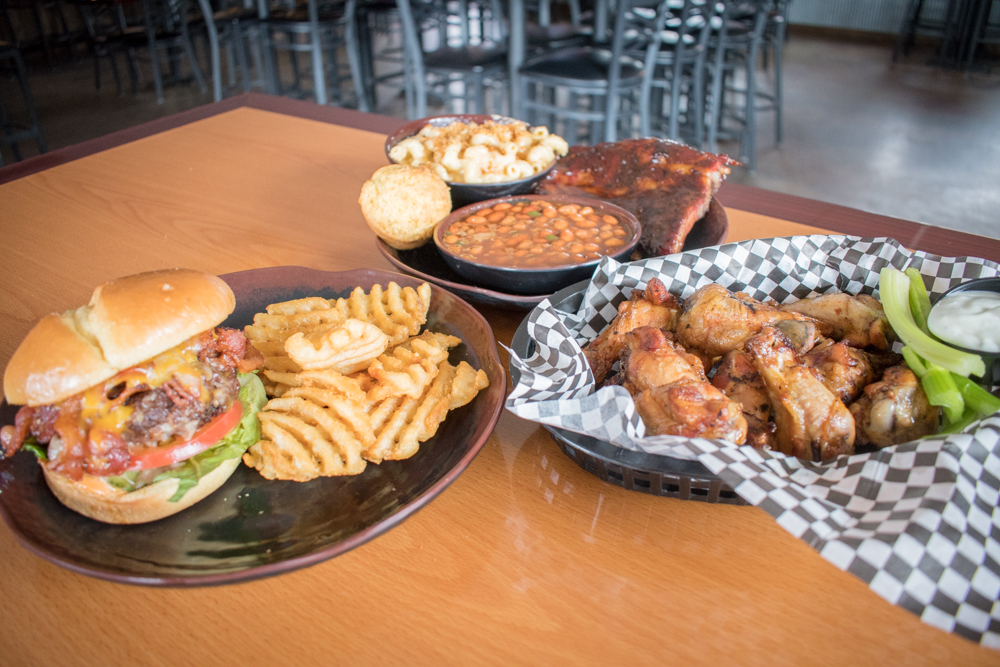 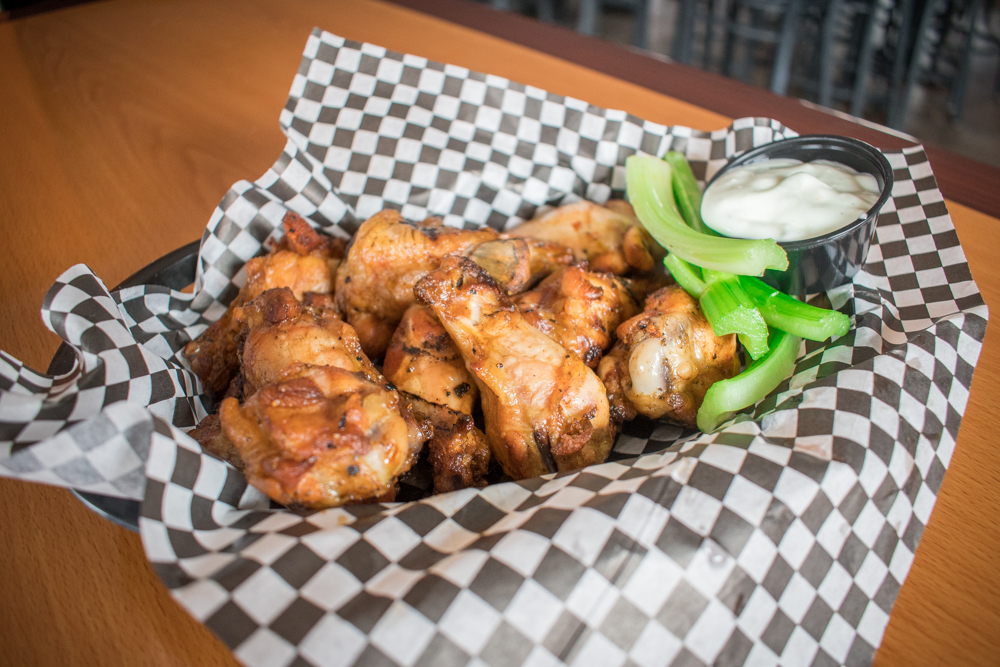 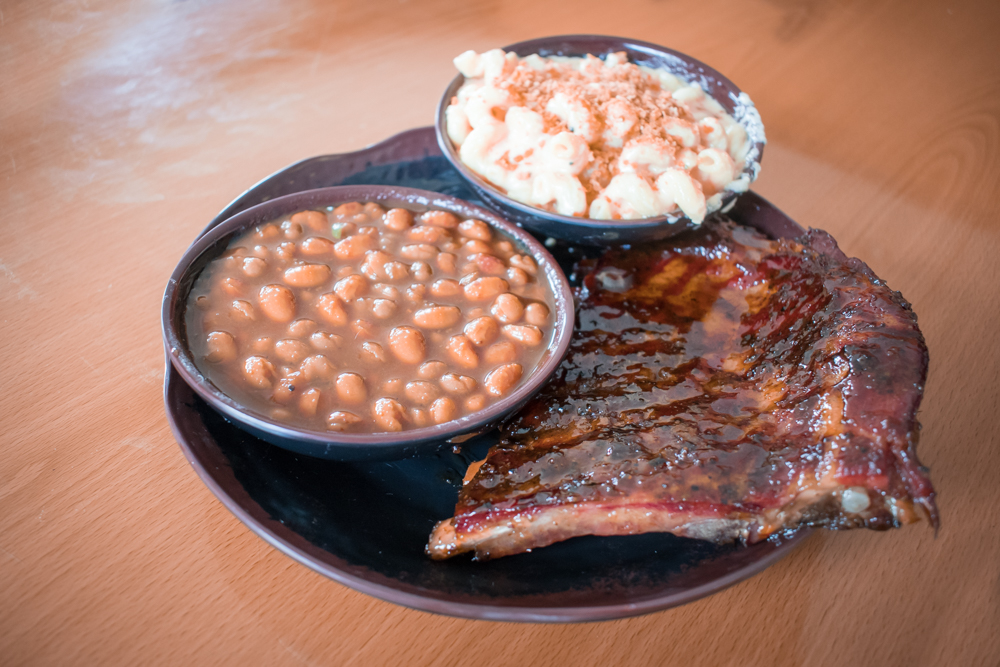 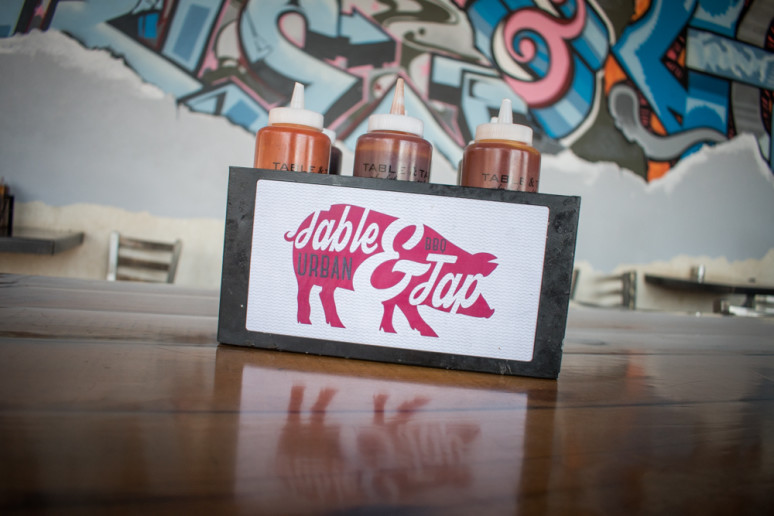 Also on the menu are ribs, salmon and chicken, all smoked in-house. The sauces are all house-made from mild to hot and pair well with the meat, says Becca. The most popular dishes are the combos: a choice of two or three meats and sides, including mac & cheese, collard greens, chili, mashed potatoes, corn and cornbread. The restaurant also has 30 Michigan craft beers on tap. 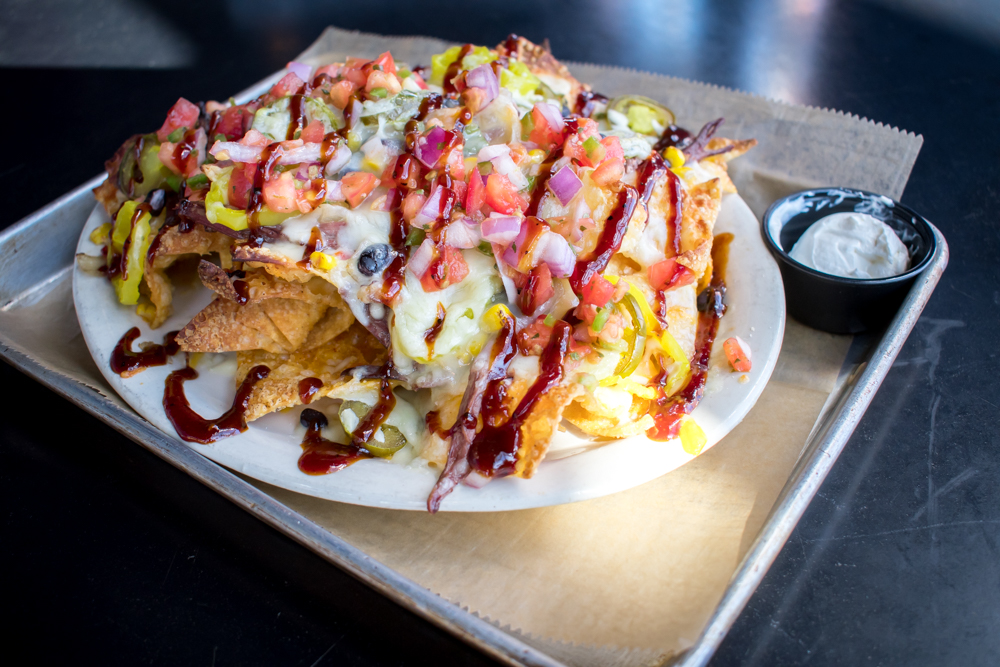 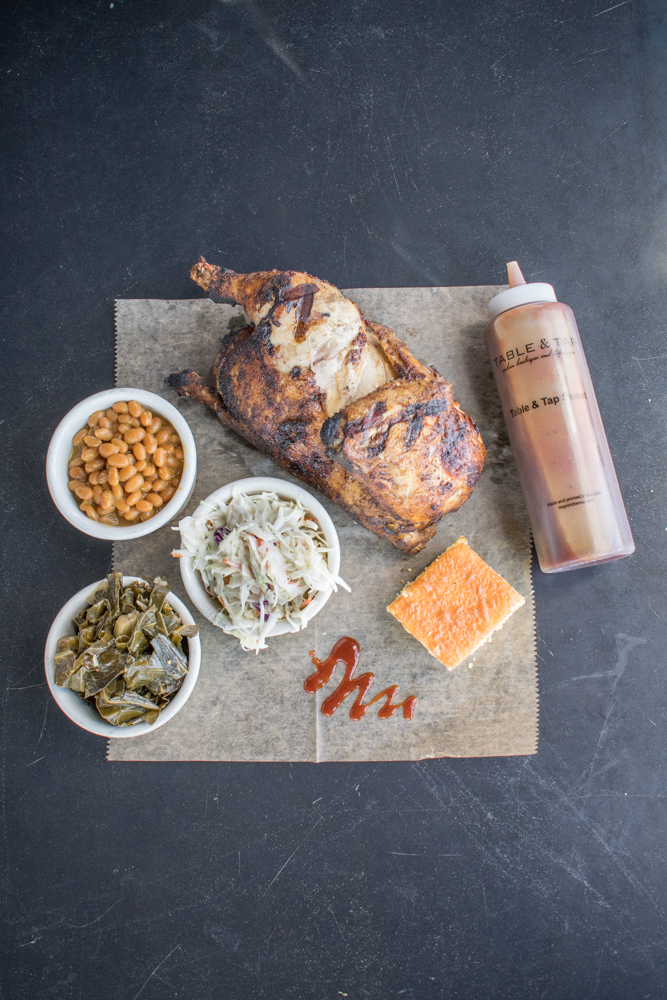 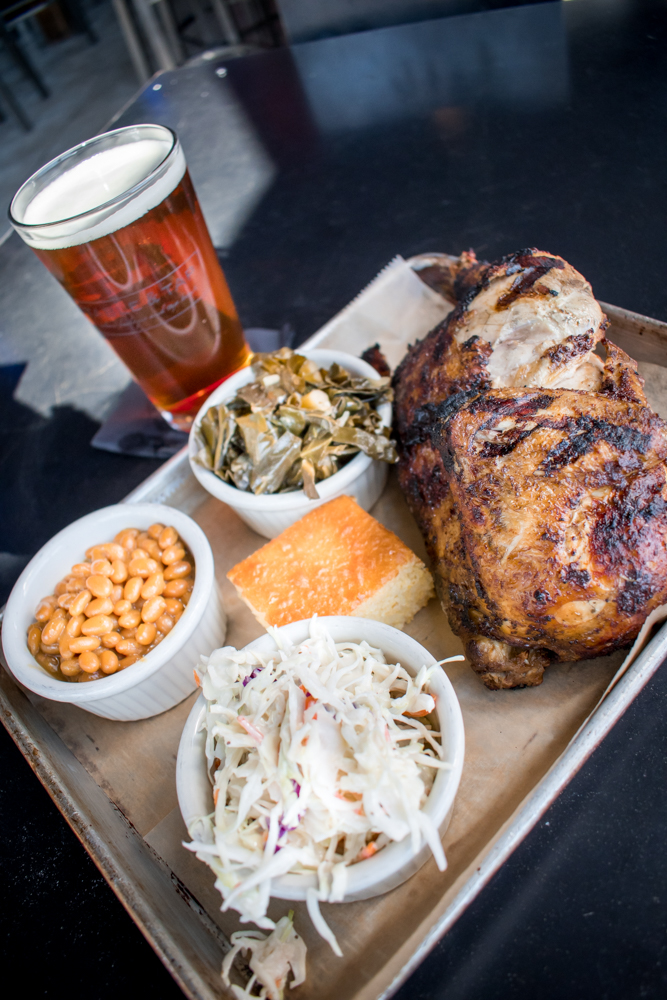