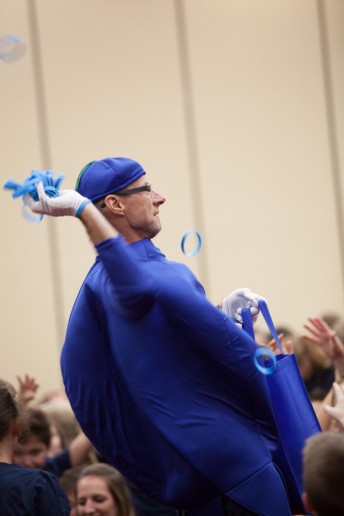 Phil Shaltz has been successfully investing in his community to make it stronger and better. Leading by example, he continues to do this with something he calls “a stupid idea that works” – the Blueberry Ambassadors.

In 2012, Phil and his wife, Ardele, went on an Alaskan cruise vacation. During a zipline adventure, Phil overheard someone ask his twenty-something zipline guide, Matt, how things were going. Matt shared, “I’m really concerned about the blueberries.” At first, Phil thought it was odd for someone to be concerned about something that seemed so small, so insignificant. “My feelings were that he wasn’t in touch with reality, and that his concern was real to him, even though it was meaningless to me,” Phil explains.

When he asked Matt to explain, Phil learned that Alaska’s large blueberry crop hadn’t had enough rain that year. “For some reason, this started me thinking about our everyday lives,” he says. “You have your own ‘blueberries’ to worry about, that I couldn’t care less about. I started to think that we go through this life and don’t really listen to people who have these ‘blueberries’ – these problems – and for them, it’s a real deal.” 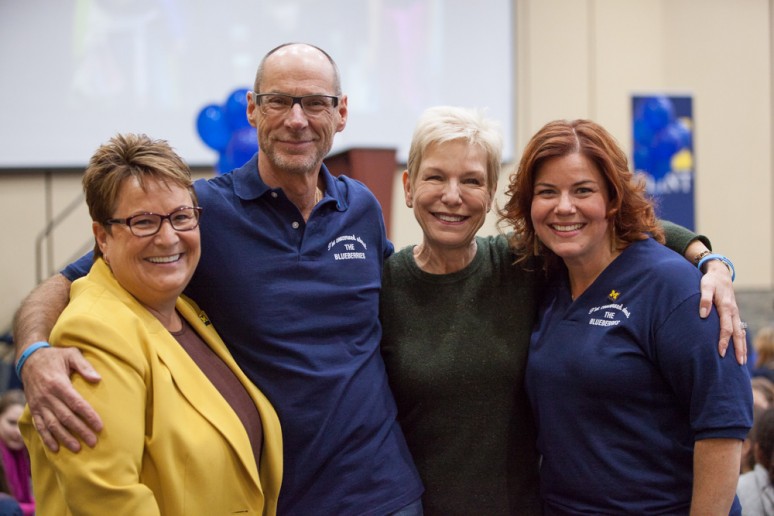 A couple of years ago, Phil put up an ambiguous billboard on I-69 that read, “I’m concerned about the blueberries,” and it created a frenzy with people in the area. Teaming up with Marjory Raymer and The Flint Journal, their idea for an awareness campaign included a “safe” page in the newspaper, where people could share “Blueberry Moments,” in a positive space. Ten or 20 adults would function as “Blueberry Ambassadors,” spreading pay-it-forward deeds around the area and distributing Blueberry Cards printed with their mission statement. “It failed miserably,” Phil says. “Adults are overrated. Life got in the way; it wasn’t a big deal to them. A small issue becomes nothing to someone when it’s not really their issue.”

This is when Phil re-thought the potential ambassadors for his Blueberry activist group, and came up with … kids! In the spring of 2014, ten Genesee County schools and 100 students began participating and submitting their stories of helping fellow citizens, inspired by the Blueberry Ambassadors. One such example of a “Blueberry Moment” Phil shared was when a 12-year-old girl gave her umbrella to a mother and two children who were walking outside during a rain storm. Based on the stories they shared, the students can win awards, and winners of the public poll receive donations, courtesy of Phil and Ardele. In addition to the school awards, two junior or senior Blueberry Ambassadors can win a newly established $6,000 or $11,000 scholarship for tuition at UM-Flint. 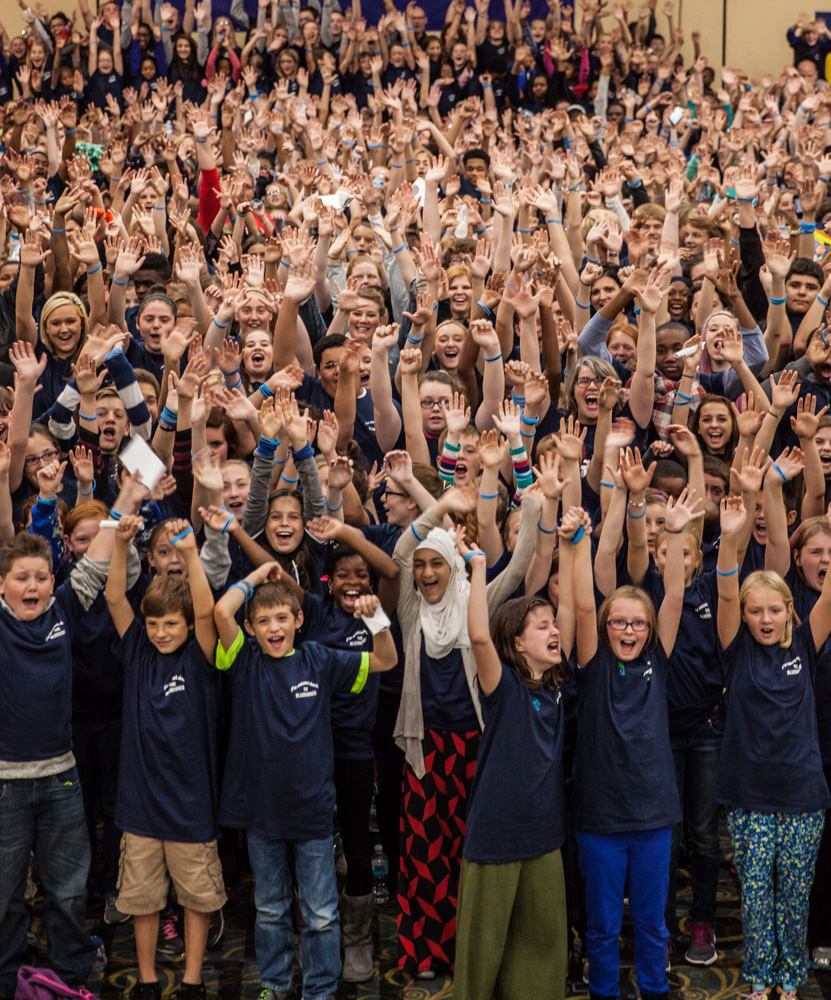 Since it began with 100 students, the Blueberry Ambassadors have grown in the last year to include about 86 schools or teachers in Genesee County. About 1,050 people attended the kick-off event on October 22 at Riverfront Banquet Center – surpassing their original goal of 1,000. With these gatherings, Phil’s goal is to continue understanding how being a Blueberry Ambassador affects the students; he is able to interact with them and see the campaign’s progress. “With all the negative distractions in the world, it’s fun to get so many kids mobilized in a positive way,” Phil says. The kick-off event was high-energy and silliness, with blue balloons and beach balls, pizza for lunch and hundreds of Blueberry Ambassador bracelets tossed by Phil into a “sea of blueberries.” The kick-off motivates students, challenging them to do something special and spread kindness whenever and wherever they can.

“It just makes you stop and think how many little things people are really concerned about each day that other people could help with, but don’t. It’s a whole awareness thing,” Phil says. “We don’t get exposed to what people’s issues are and how we could help them. We have to get people to be aware of their surroundings to hopefully make a nicer community.” 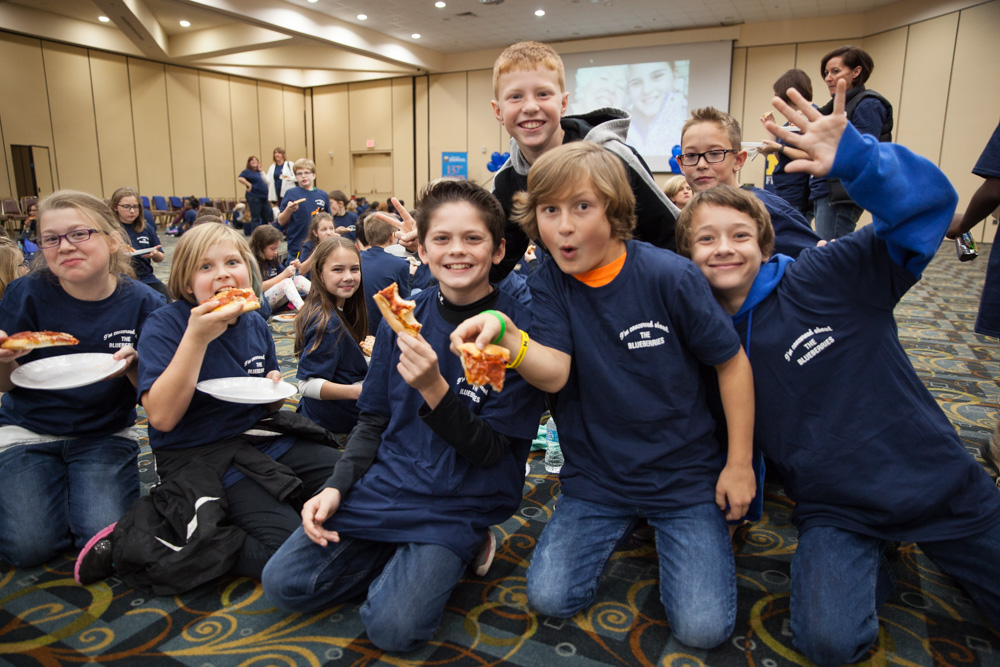 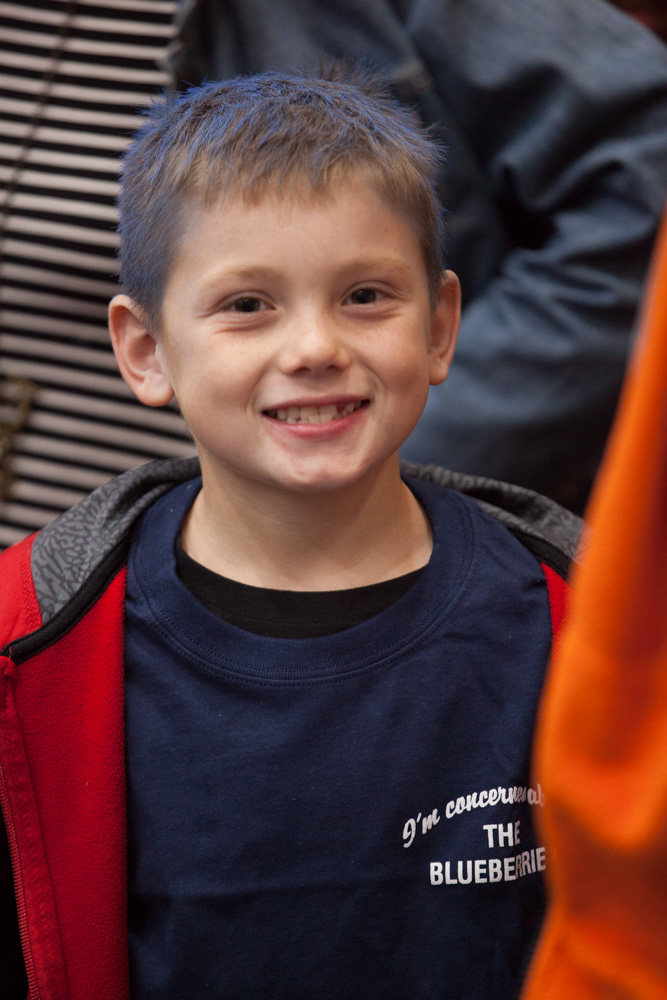 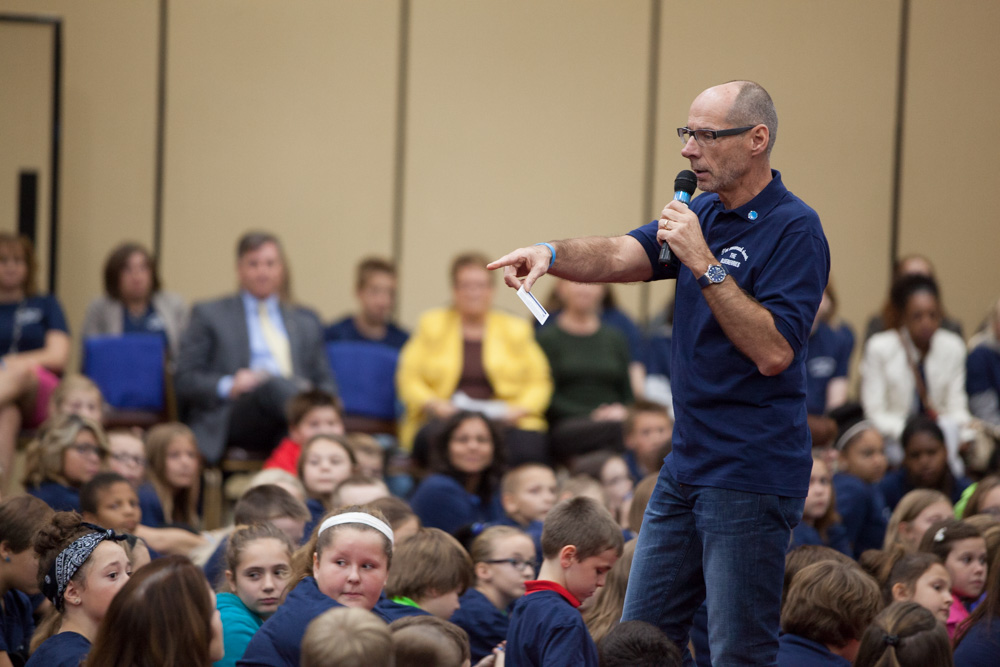 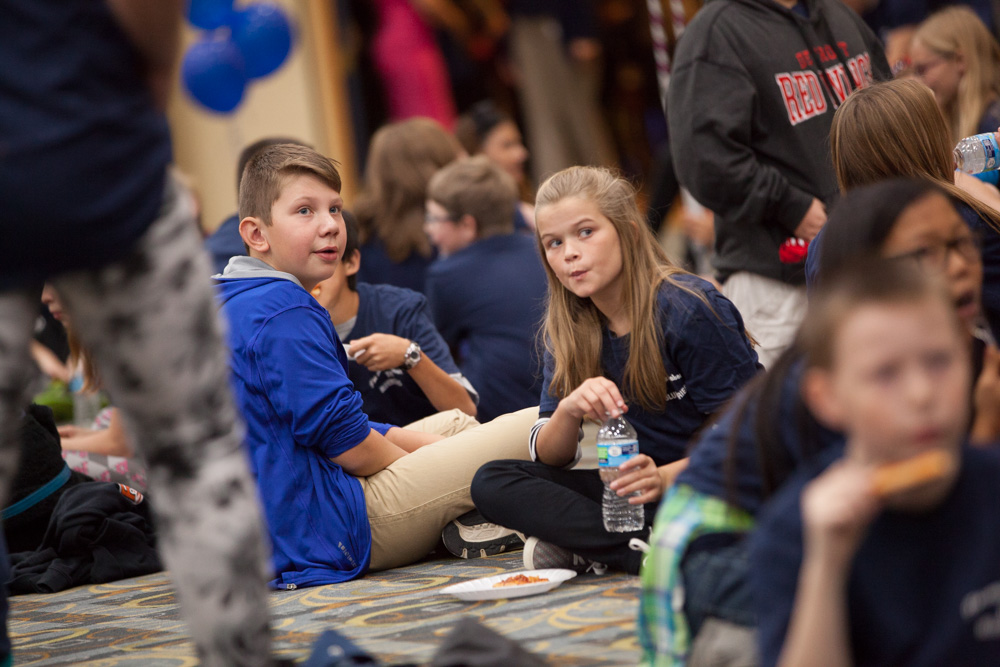 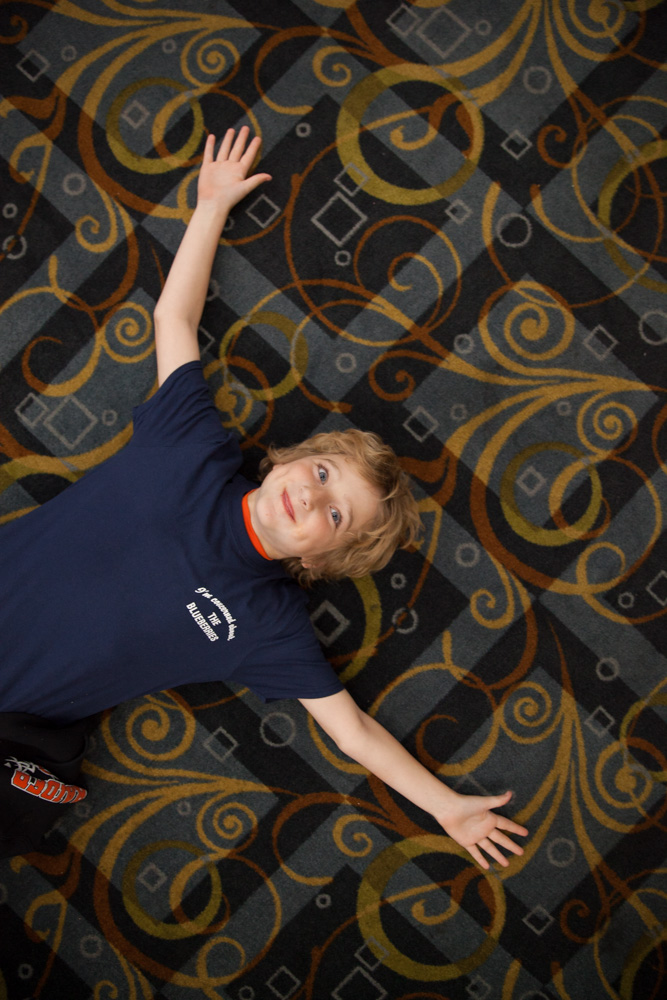 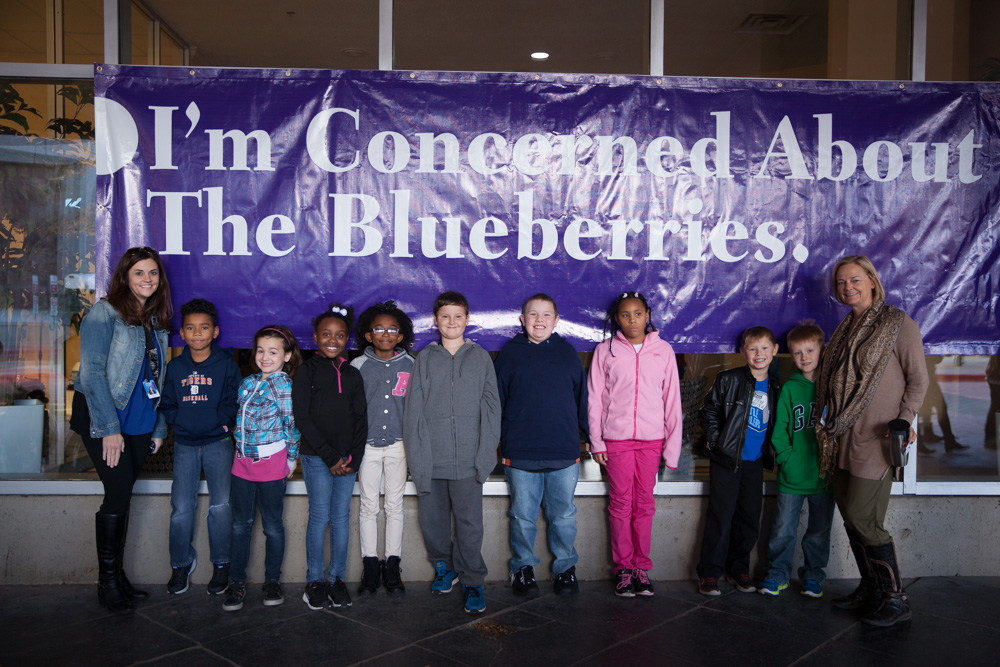 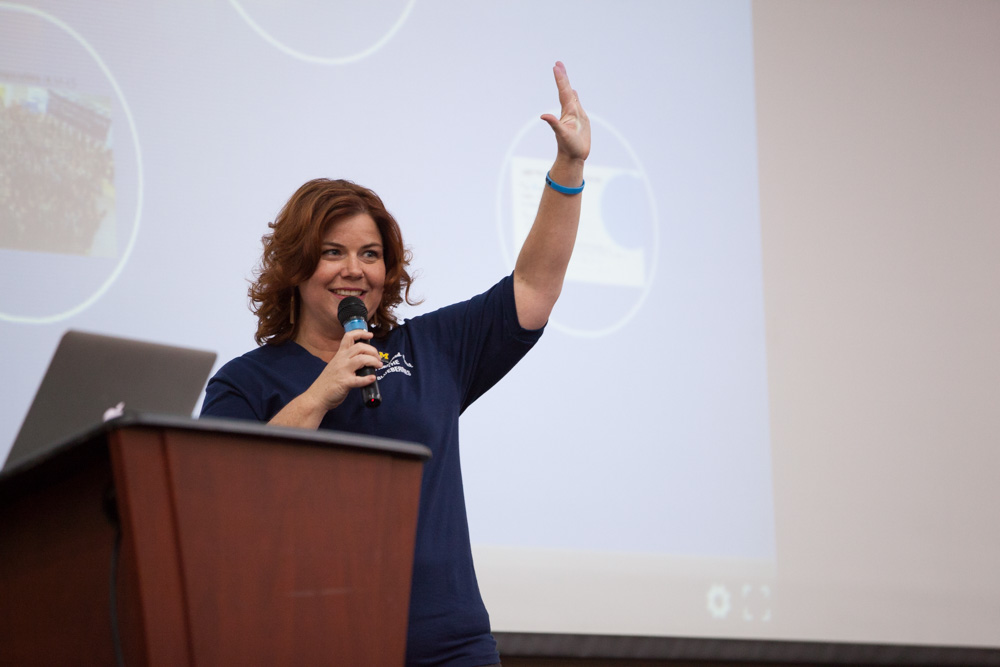 Phil had another example of how Blueberry Ambassadors are impacting the community. He occasionally goes through a McDonald’s drive-thru and pays for the order of the person in line behind him. In addition to paying for their meal, he will also give them a Blueberry Card. One day, Phil was in the drive-thru and before he paid, he was told that the person in front of him had bought his meal, and the cashier handed him a Blueberry Card. Moments like that are just what Phil had hoped for with this campaign. “That’s when I knew we had something,” Phil says. “That’s when it started to take shape.”

The Blueberry campaign is not only changing people’s lives, but also changing the lives of the Ambassadors, themselves. It makes the students feel good about every single day, and raises their confidence both in and out of the classroom. “We knew that if we paid for someone’s coffee in a coffee shop, they’d appreciate it. What we didn’t know was how the Blueberry Moments would affect the kids,” Phil says. And, paying it forward means something different to each person; it’s holding the door open for someone, reading to an elderly blind woman, buying a winter coat for a person who needs it, or even making wristbands for nurses in the Genesys Neonatal Unit. Whatever their good deeds, they are beginning to change the way Genesee County students view the world around them.

“With all the negative distractions in the world, it’s fun to get so many kids mobilized in a positive way.”
Phil Shaltz

“We’re trying to change their DNA,” Phil explains. “You can tell – they’re like little sponges. Kids want to do stuff like this; they just haven’t had a vehicle to do it.” By “changing their DNA,” Phil hopes that when today’s Blueberry Ambassadors grow up and have children, that they will pass on second-nature habits of doing good deeds for others. “Maybe everyone will be kinder to each other,” he says. “It’s just that simple.”