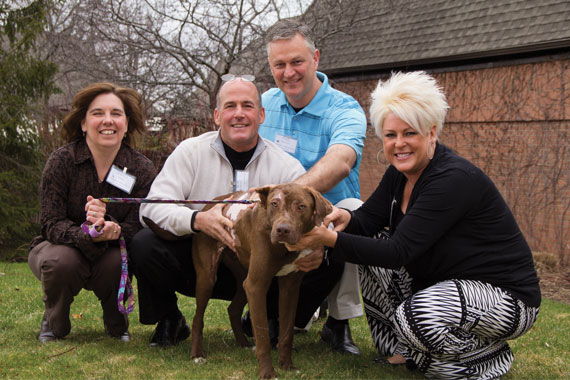 Sometimes, you hear a story so heartbreaking, it brings tears to your eyes and becomes ingrained in your soul; yet, it is so inspiring, it makes you believe that there is hope and that there are good people, many good people, in this world. This is one of those stories. This is the story about a dog on his last legs, the story of a street dog named Bernie Burns.

It was a cold, November day in the city of Flint. When two workers from DeWitt Building Company saw something slowly limping toward them on the street, they weren’t exactly sure what it was. The Chocolate Lab/Chesapeake Bay Retriever mix, had been doused with gasoline, set on fire and left for dead, which left him so mangled that Bob Weiner and Paul McCann did not even know it was a dog. They stared at the poor creature in utter shock, Bob thinking the animal may have been hit by a car. But as he got closer, the men realized it was a dog that had been severely burned and needed help. “He was on his last legs,” said Bob. Paul tried to pick him up as gently as he could. He knew that it would be painful for the dog, but he had no choice, knowing that he had to do something or the dog would die. “In spite of his pain, when I picked him up he licked my face and his tail was wagging,” said Paul. “Bernie had not lost his love for humans.”

Bob and Paul took the dog, desperately in need of medical attention, to the Humane Society in Flint, where they encountered staff member, Gretchen Sommer. Gretchen was walking into the building for her shift as Bob and Paul were bringing Bernie in. He was immediately sent to a veterinarian for treatment. “All I could think about that night was Bernie,” Gretchen said. She happened to be the one sent to pick Bernie up from the vet after he was treated. He had raw, open burn wounds on a good portion of his body and one ear had to be removed, so he had stitches. He had a scar on his front leg where he had been tied. Emaciated, he weighed just 42 pounds. Gretchen was told that the dog needed to be kept away from other animals, as he was at risk of infection.

With many pets of her own at home, Gretchen called her husband, Derek, and asked if he would keep Bernie at his office in Grand Blanc to allow him to heal. “Everybody at the office fell in love with him,” she said. After about three weeks, the Sommers were able to bring Bernie to their home where they fostered him for a total of 52 days. There was so much public interest about his recovery, Gretchen created a Facebook page, “Bernie’s Journey” where she kept a journal of his progress. People donated food and toys, and Dr. Jodie Davies donated the laser therapy treatments necessary to heal his burns. “For a while, it was like Christmas every day,” said Gretchen, about the outpouring of gifts for Bernie.

As Bernie recovered, it became time to find him a home. Gretchen couldn’t adopt him, as she had reached the limit on the number of animals she could keep at her home. A friend who also works in animal rescue, Shelly Oree, kept asking her about Bernie and Gretchen thought that he and Shelly would be a perfect match. So, she asked her if she wanted to adopt him. Gretchen knew that if Bernie lived with Shelly, she would get updates on his condition and she wanted to stay in his life. And while it was a sad day, Gretchen said goodbye to Bernie on December 28, 2012, the day Shelly adopted him. At that time, his weight had increased to a healthy 68 pounds.

Last April, Bernie Burns was able to reunite with his rescuers and with Gretchen at the Humane Society of Genesee County’s biggest fundraiser, Paws on Parade. As a special guest of the event, a video of his journey was shown to the 240 attendees. “It was a real tear jerker,” Gretchen said. A lot of people were moved. Some cried, but some cringed at the graphic images of when Bernie was first brought to the shelter. “People like to believe that stuff like this doesn’t happen here,’ said Gretchen. “It’s hard to imagine that the people who did this to Bernie walk among us.” But instead of thinking about the negative, Gretchen chose to focus on healing him. “He was one of the lucky ones,” said Gretchen. “He got away and survived.”

Now, life has come full circle for Bernie Burns. At this writing, Gretchen reported that his owner, Shelly, was in the process of getting Bernie the training needed to become a therapy dog for kids who have been burned. “I believe that is what he is meant to do,” she said.