Ascension Genesys Hospital is offering a new treatment option for patients with severe emphysema, which is a form of chronic obstructive pulmonary disorder (COPD).

A new type of endobronchial valve, smaller than a pencil eraser, can be implanted without surgery or incisions to damaged areas of the lung, helping people who have advanced COPD to breathe easier and enjoy a better quality of life.

Made by Pulmonx (based in Redwood City, CA and Neuchâtel, Switzerland) the Zephyr® endobronchial valve is the only such device to receive approval from the FDA for treatment of patients with homogenous distribution of the lung disease, making it the only minimally-invasive option to help control symptoms once medications are no longer effective.

According to the American Lung Association, more than 16.4 million people have been diagnosed with COPD, with 3.5 million of those individuals having emphysema, which is caused when lung tissue becomes hyperinflated and damaged usually because of cigarette smoking or inhaled toxic chemicals/substances.

While there’s no cure, it can be treated and managed through medications, oxygen therapy and pulmonary rehabilitation. Even with these treatments, more than one million emphysema patients suffer symptoms of hyperinflation – where air becomes trapped in damaged areas of the lung and puts pressure on healthier parts of the lungs. This can cause extreme shortness of breath and make activities like walking or eating difficult. With limited treatment options, the only other alternatives include invasive procedures like lung volume reduction surgery or transplantation.

“Medical care for emphysema often involves bronchodilators, and if the patient gets worse, we use oxygen therapy,” said M. Ghiath Bayasi, MD, a physician board certified in pulmonary, critical care and sleep medicine.

“Traditional surgery may remove damaged areas of the lung, but these procedures have frequent complications, especially for people with emphysema who often have heart disease and increased complications, putting them at greater risk and longer recovery time. In contrast, I can now perform a new endobronchial valve procedure using a bronchoscopy which requires no incisions or cutting,” explains Dr. Bayasi.

During the procedure, three to five tiny valves are inserted in the diseased area of the lung. The valves prevent air from getting into the bad part of the lungs but allow trapped air to escape. The healthy part of the lungs are able to expand more fully, relieving pressure on the diaphragm and making breathing easier. 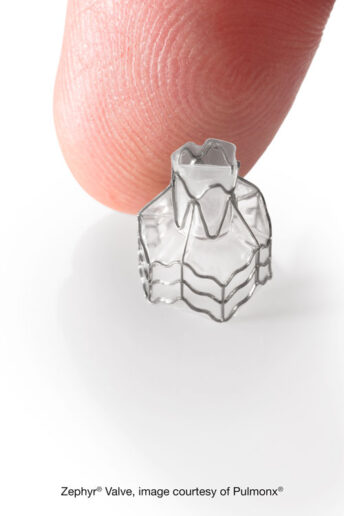 Clio resident Krystal McCotter was among Dr. Bayasi’s initial patients to receive the new endobronchial valve. “Before the procedure, I could hardly breathe. Now I’m back to where I was years ago. I feel 100 percent better,” McCotter said. “I have a garden outside, and I’m so glad I can do gardening again. It’s nice to be outside.”

Individuals who may be eligible for this procedure must have a diagnosis of severe COPD with emphysema and hyperinflation, breathlessness despite taking medications and a relatively high degree of airway obstruction. For more information, talk with your physician.

According to the American Lung Association, more than 16.4 million people have been diagnosed with COPD, with 3.5 million of those individuals having emphysema.

The Zephyr Valve treatment procedure implants tiny valves into a targeted section of the diseased lung where air has become trapped, causing shortness of breath. The one-way valve allows the trapped air to escape, resulting in easier breathing.