For Greg Jones and Deb Gustafson, life has changed dramatically since being diagnosed with kidney disease.

Greg has lived in Flint for the last ten years and had just finished his Bachelor’s degree at ITT, ready to conquer the world with his wife Shalonda Griffin by his side, when his kidneys began to fail. Now, the 38-year-old is on the waiting list for a kidney transplant and undergoes in-office dialysis three times a week. And still, things can go wrong. Last year, while doing dialysis as directed, he had a toxin overdose that left him unable to speak for a day and a half. “He couldn’t speak, he was seizing, it was awful,” Shalonda says. Greg lives with the constant reality that “if I do not receive a kidney in a few years, I am going to die. Without dialysis, I am going to die.”

This harsh reality is almost too much for Deb, 63, a longtime Flint resident who was manager at Dale’s Natural Foods for 17 years. She was diagnosed with kidney disease in 2004 and started dialysis in 2014. Her kidneys eventually had to be removed, and now she has at-home dialysis five days a week. “It’s a hard life,” Deb says. “If I didn’t have my caretakers, I don’t know how I would do it.”

She came close to receiving a kidney last January. “They got as far as a surgery date, and at the last minute, they did a CAT scan and found that the donor’s kidney had plaque in the connection, so the donation wasn’t possible,” she recalls. Deb has spent so many years waiting, and it is only getting more difficult.

Life has drastically changed for Greg’s wife Shalonda, a Genesee District Library Assistant who now introduces herself as a community advocate for Gift of Life. She has stepped up, doing everything she can to raise awareness about organ donation in Genesee County, to offer support to those in her situation, and to help find a donor for Greg. In June 2016, Shalonda put together the “Have a Heart” program to educate the community on organ donation.

That is where she met Valerie Canary, Organ and Tissue Donation Liaison at Hurley Medical Center. Valerie has been the liaison since 2013. “Anytime there is a potential organ donor at Hurley, I do anything necessary to ensure that a patient’s wishes are upheld in regard to donation,” Valerie explains. She
and Shalonda quickly became a team, working together to start the conversation, to educate people and dispel the myths about organ and tissue donation. 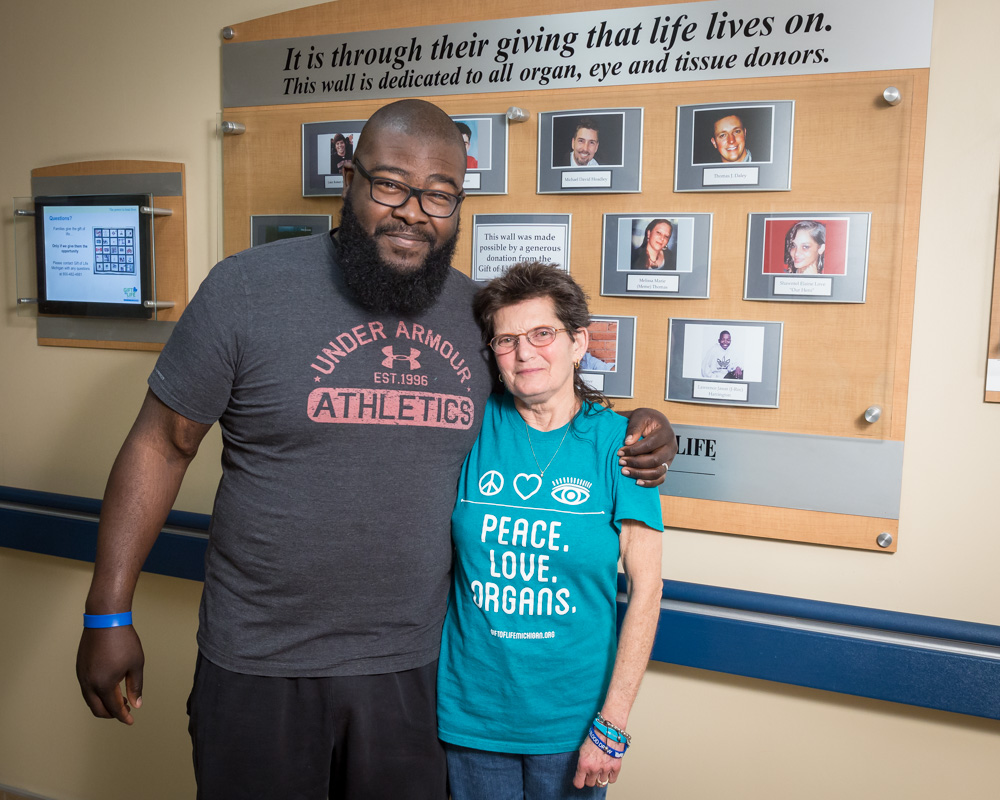 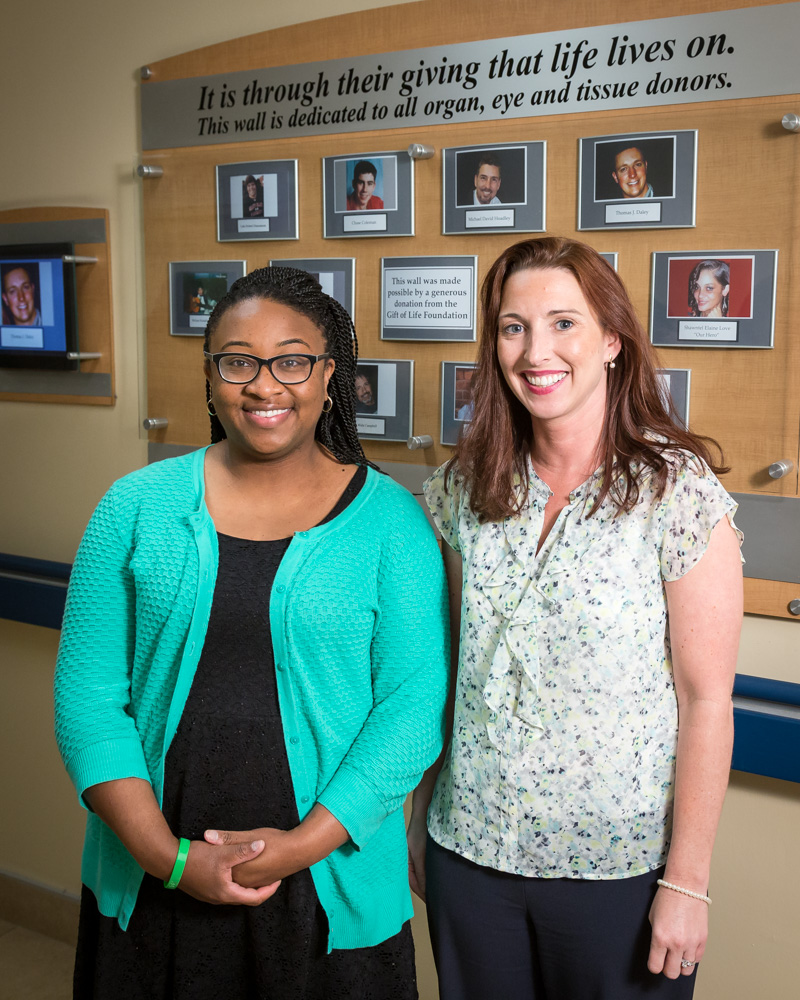 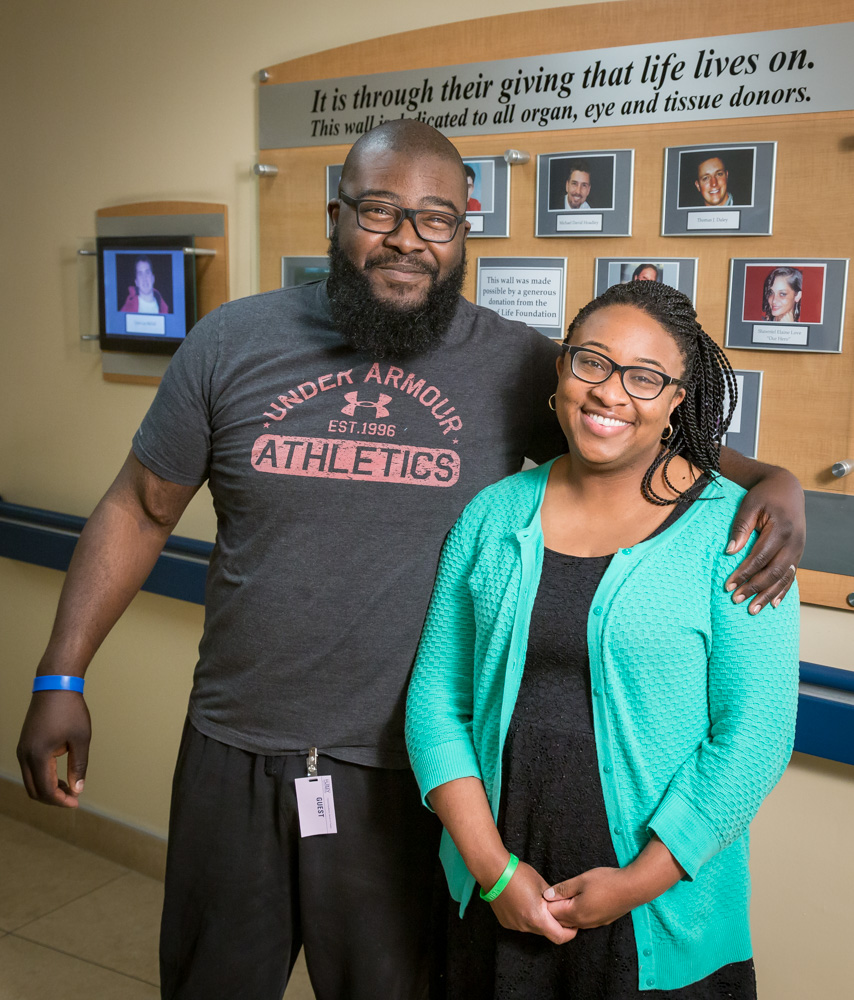 They all met last June at the first Have a Heart event. Shalonda wanted to make sure that as many people as possible were asked, “would you like to become a registered donor?” Have a Heart makes it possible for Michigan residents to register for organ and tissue donation at their local Genesee District Library.

Shalonda also discussed with Valerie her need to personally connect with people who were in the same situation as her husband. “A lot of people were very sympathetic to what Greg and I were going through, but they still didn’t really get it,” she shares, knowing that it’s hard to understand unless you are in the situation. “I wanted to be around people where I could use words like ‘uremia’ and I wouldn’t have to explain it. I wanted to be around people who would understand what I meant when I said, ‘Greg’s legs felt like logs today’.”

Shalonda also felt that it would be good for people going through dialysis to connect with others experiencing the same thing, “because sometimes you feel very alone.” Shalonda found that it was harder to find other younger couples in a similar situation. “I still want to do things that young people do and not worry about hospitals and medications and insurance companies, so just for my mental health, I thought it would be great if we could put a group together and just talk about what life is like for us.” Valerie and Shalonda organized a support group that meets on the third Tuesday of the month from 7-8pm at Hurley’s Conference Center. “We also discuss what we can do to inform the community and work to improve donor registration in Genesee County,” Valerie adds.

Myth: Doctors won’t save my life if they see I am an organ donor.

Fact: In reality, a medical center will do everything in their power to save your life, regardless of whether or not you are on the donor registry. Valerie urges, “We want everyone to know that at Hurley, we are going to do everything we can to save you or your loved one. It’s only at the time when a family decides to withdraw or a person has been declared brain-dead, that they are going to discuss organ donation.”

Myth: If I register as an organ and tissue donor, someone will call me and tell me that someone needs my liver.

Fact: Registering as an organ and tissue donor is not the same thing as becoming a living donor. Even then, everything you do with your body is your choice. There is a process. A living donor pursues donation if they are determined to be a match for someone like Greg or Deb. So, you have a blood test and go from there. Because you can live with one kidney, you could be a living donor for Greg or Deb, if you are a compatible match. Whereas, all other organ and tissue donations only happen after the registered donor has passed away.

Myth: If I donate, I won’t be able to have an open casket at my funeral.

Fact: This is also untrue – a traditional funeral service is still possible. Everyone has the right to choose what they want to donate, and those with an Advance Directive, (Living Will) can spell out exactly what they wish to donate upon their death.

Myth: I won’t donate because it costs money.

Fact: There is no charge for donating an organ – Gift of Life pays for everything.

Myth: My religion doesn’t allow it.

Fact: Shalonda reassures that, “Nearly all religions support organ donation, because what can be more loving than to save a life?” Gift of Life supplies information on every major religion’s stance on the issue. “Even Jehovah’s Witnesses or others who don’t allow blood transfusions support it because there is now a bloodless surgery,” Shalonda emphasizes. “So, you can still donate or have the opportunity to extend your own life through a transplant without violating your beliefs.”

Myth: I cannot donate because I have a chronic illness or other health condition.

Fact: Even if you have a disease, you might be a match for another person with the same disease. For example, while Deb Gustafson has no kidneys, she is still on the donor registry because she is willing to donate her other organs and tissue. “You may be eligible to donate an organ not affected by your condition,” Valerie states. “The Gift of Life team can assess what you are eligible to donate – they determine any medical rule-outs. But, we have donors who are in their 80s and also very young, so medical conditions do not often preclude donation.”

Myth: If you are on dialysis, you’re fine while you wait for a donor organ.

Fact: Dialysis is very hard on the body. According to Deb and Greg, the treatment makes it impossible to do anything else on the days they have it. There are no vacations from dialysis either – a patient must do it, or the consequences are dire.

Other Facts About Organ Donation in Genesee County:

DIALYSIS
When kidneys fail, dialysis keeps the body in balance by removing waste, salt and extra water to prevent a build-up in the body. It maintains a safe level of certain chemicals in the blood, such as potassium, sodium and bicarbonate, helping to control blood pressure.
Have a Heart makes it possible for Michigan residents to register for organ and tissue donation at their local Genesee District Library.