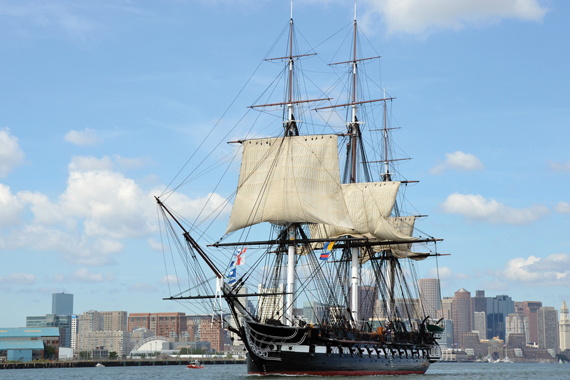 The tea from the Boston harbor may be long gone, but one symbol of our country’s rise to greatness still lies in that harbor, a piece of living history. And one seaman has joined his legacy with hers.

Melkus is a graduate of Grand Blanc High School and a seaman aboard the USS Constitution, the United States Navy’s oldest commissioned warship. How old? “She is 216 years old and has literally been around since the very beginning of the U.S. Navy,” Melkus reports proudly. Melkus, who graduated from MSU in 2008, says that the military has always been his Plan B. “When I graduated with a journalism degree in 2008 and had difficulty landing a job, I decided it was now or never to give the military a try,” he remembered. “I chose the Navy because growing up around the Great Lakes has made me a lover of large bodies of water, and I knew the Navy could afford me unique life experiences and help me get out and explore the world.” After attending boot camp in 2009, Melkus was assigned to an aircraft carrier named USS Enterprise from 2010-2013. Last March, he was assigned to Constitution.

Named by George Washington himself, the USS Constitution was one of the first six frigates in the U.S. Navy, built in response to the threat of pirates off the coast of Africa who were crippling the weak new nation’s trade. The 44-gun vessel was constructed in Boston following the President’s signature in 1794, and was launched on October 21, 1797.

When President James Madison declared war on England in 1812, Constitution had already won all of her previous battles in the Quasi War with France and the Barbary Wars nearly 12 years before. To the shock of the Americans and the humiliation of the British – the undisputed maritime world power at the time – her streak continued in the War of 1812. Constitution’s dual with the HMS Guerriere on August 19, 1812 was the first American naval victory over England. Following Constitution’s victory over the HMS Java five months later, the British Admiralty decreed that their warships would no longer engage American frigates in one-on-one combat. On February 20, 1815, Constitution faced the HMS Cyane and Levant and defeated both, although none of the ships’ captains could have known that the war had ended three days prior.

Historians say that while the USS Constitution’s victories did not directly influence the course of the war of 1812, they helped uplift American morale and ended forever the myth that the Royal Navy was invincible. “We like to think of Constitution as Boston’s only remaining undefeated team, because she is 33-0 in all of her engagements at sea,” joked Petty Officer Melkus.

A Young Man Aboard an Old Ship

Today, the ship can be found at her dock in Boston as a stop on the Freedom Trail. Melkus says that Constitution goes out into Boston Harbor about five times each summer; during those trips, including the Fourth of July cruise and birthday celebration in October, Constitution goes several miles into the harbor to a place called Castle Island. “There, we fire a 21-gun salute from the ship’s two artillery batteries, which everyone on our crew is trained to fire, then we turn around and head back into our pier in Charlestown Navy Yard. All told, the trip usually takes about three hours.” Due to her considerable age, Melkus says that the last two times the USS Constitution sailed unassisted were in 2012 to commemorate the bicentennial of the War of 1812, and in 1997 for the ship’s bicentennial birthday. “We save the sailing for very special occasions only because of the strain it puts on her structure,” he commented, “and also because you need a large crew of people to sail her (around 150-200), and our crew typically hovers around 75 sailors.” Day-to-day operations on the ship include significant maintenance, says Melkus, who must take part in weekly sail training where he learns to climb the masts and set and furl sails aboard the ship. He also conducts tours for the public and helps man 24/7 security watches. “There’s always plenty to do!” he said of his duties.

When asked, Melkus said that his favorite Navy-related term is scuttlebutt. “Today it refers to rumors or gossip, but it originated aboard ships like Constitution because on their work breaks, sailors gathered around a scuttled butt, a large butted barrel with a hole (scuttle) where water could be ladled out, and they would drink and chat. The original ‘water cooler’, many rumors were generated around the scuttlebutt, so the word evolved into a term for gossip. We still have a scuttlebutt on Constitution‘s gun deck that visitors can see today.”

Melkus says he is honored to be a Constitution sailor and a part of history. “I often think about the long, long line of sailors who served, fought and lost their lives aboard Constitution before me. It’s really quite surreal when you think about being a part of that history and helping to continue the ship’s great legacy. I like going aboard Constitution by myself at night, because when it’s quiet, you can almost hear her talking to you and trying to tell you about all the places she’s been and all the battles she’s fought and won over the past two centuries. If only her walls could talk! In a way, Constitution is like a time machine in the middle of Boston – you can really lose yourself to history once you step aboard her and imagine what life was like for her sailors back in the 18th and 19th centuries.”