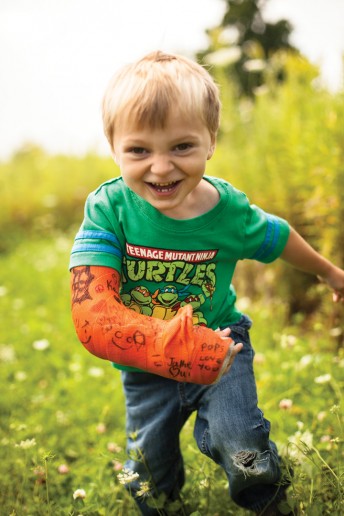 Kaleb Turner, age five, has big brown eyes and a solemn expression that makes him appear wise beyond his years. With just one smile, he steals your heart. Born on Johnny Carson’s birthday, he is quite a comedian, always trying to make people laugh. He is small for his age and his family’s two Border Collies, Kaya and Marley, are his best friends in the world. He loves riding his bike, eating doughnuts and playing with his cousins and schoolmates. He is just like any other kid, with one exception – he suffers from Type V Osteogenesis Imperfecta – more commonly known as Brittle Bone Disease. This is his story.

Kaleb was born on October 23, 2010 to Jeremy and Traci Turner. Jeremy is a firefighter with the Flint Fire Department and Traci is a self-employed photographer. Her pregnancy was routine, but a C-Section delivery was required. As an infant, Kaleb showed no signs of OI. “He was a normal baby,” says Traci, “and there were no red flags.” The first indication that something wasn’t quite right was when he was learning how to walk. He fell, and using his hands to catch himself, he broke his wrist. The worried parents took their son to an urgent care center and after looking at the X-rays, the doctor sent them to a different medical facility. “The doctor knew something wasn’t right,” Traci says. The results of the X-rays were devastating, showing signs of previous broken ribs, a skull bone fracture, broken ankle, a bowing of the femurs, and the new wrist fracture, leaving his parents in shock. Kaleb was then referred to a specialist at Beaumont Hospital in Detroit where he was diagnosed with OI-V. There are eight different types of OI, with symptoms ranging from mild to severe. 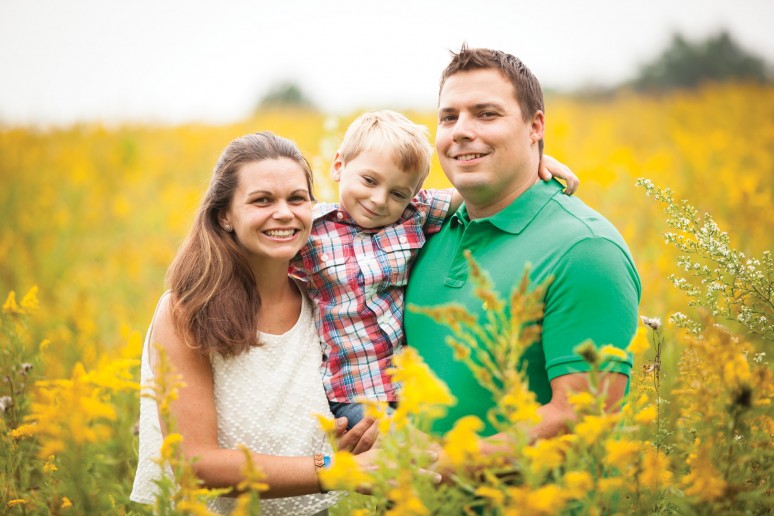 Jeremy was overcome with emotion upon hearing his son’s diagnosis. An avid athlete, his hope of sharing that passion with Kaleb was dashed. “All his dreams went out the window,” Traci said. Traci’s reaction? “I was scared. And my first thought was, What do we do now?” Determined to make the best of the situation, Traci decided to take it a day at a time, but still asked herself, Why Kaleb? “I had to believe that God has bigger plans for Kaleb and that he is part of a big, elaborate plan.” Even with that in mind, it still isn’t easy for Traci and Jeremy. A caring mother, Traci can’t take Kaleb to the playground and not be on constant guard. She is always telling him to stop and to slow down. “He runs. He is a runner,” Traci laughs. And she is constantly holding her breath while he rides his bike. But no matter how watchful her eye, accidents still happen. 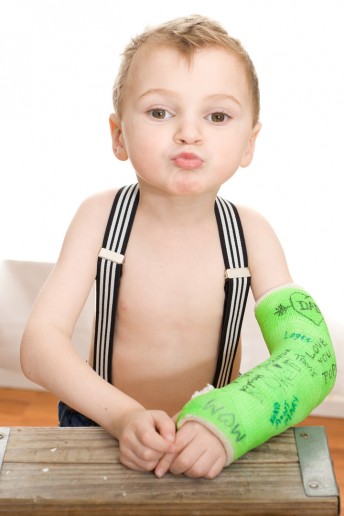 On the Fourth of July last year, Kaleb fell as he ran outside to get on his tractor. “I actually heard his bone snap,” said Traci, tearfully. On Super Bowl Sunday, Kaleb was running through the house and once again, he tripped over his own feet and fell. His parents suspected that his arm was broken, but Mother Nature threw them a curve ball – it happened during the worst snowstorm of the year. They knew if they took Kaleb to the ER, he would be sent him home and referred to his specialist at Beaumont. They didn’t want to drive to Beaumont in a snowstorm knowing his doctor would not be there on a weekend. So, they iced the arm, gave him some Tylenol and waited it out. “His threshold for pain is unbelievable,” Traci reports. “He was in so much pain but he is so used to dealing with it.” Kaleb adds, “I went to the doctor and let him squeeze my bones.”

Sending Kaleb to school was a big deal for Traci, but she realized she couldn’t keep her son in a bubble. “I was scared to let him go,” she says, “and I worried every day that first year.” Her worries were unfounded, as Kaleb’s teacher was very supportive. His schoolmates didn’t see him as being different from them. As the class sat in a group circle, Kaleb explained to them, “My bones are fragile, so don’t bump into me and let me fall.” While there were some minor incidents at school, Traci says the reward has been watching Kaleb not give up and seeing him flourish.

There was a recent scare at home. Kaleb was in bed sleeping, but became restless in the night. Traci heard a sickening, loud thump as he fell out of his bed. Fearing the worst, she raced to his side, dreading what she would find. “I don’t know what angel softened his blow, but not one bone was broken and I didn’t understand how that could be,” says Traci. “My leg hurt a little when I fell off the bed, but it feels better now,” says Kaleb.

Families who have children with OI can turn to a support group whose motto is “Unbreakable Spirit.” That spirit is evident as Kaleb runs, plays, laughs, jumps and romps with his dogs. He has learned to compensate for the limited range of motion in his elbows. When one arm is in a cast, he uses his other hand to write. He loves putt-putt golf at Uncle Ray’s Dairyland, doing puzzles, camping and putting a stamp in his State Park book for every park where the Turners camp. “I love my friends, I love to play, all my friends are my best friends,” says Kaleb. “Just because my bones are different doesn’t mean I am.”

What is Osteogenesis imperfecta?

This genetic disorder is characterized by bones that break easily, often from little or no apparent cause. A classification system of different types of OI is commonly used to help describe how severely a person is affected. OI Type V is moderately severe; it is similar to OI Type IV in terms of frequency of fractures and the degree of skeletal deformity. The most conspicuous feature of this type is large, hypertrophic calluses in the largest bones at fracture or surgical procedure sites. Hypertrophic calluses can also arise spontaneously. Calcification of the interosseous membrane between the radius and ulna restricts forearm rotation, and may cause dislocation of the radial head. OI Type V is dominantly inherited and represents five percent of moderate-to-severe OI cases. Source: oif.org