The event programmers in my suburban school district in the late ’60s and early ’70s were somewhat adventurous, or so I like to think. They seemed to want to offer a diverse menu during our elementary and junior high movie breaks, rather than feeding time-killers through their humming 16mm projectors.

Yes, we were beset by routine “B” flicks (you won’t see The Captive City with John Forsythe on Turner Classic Movies anytime soon), but we also could view TV documentaries like Black History: Lost, Strayed, or Stolen and legit film classics like Citizen Kane or Fail-Safe that helped forge social attitudes.

Citizen Kane planted the seed for me to become a journalist – a yen that came and went. But a more lasting influence from those hours of sitting on cold, tiled school floors was the wonderful comedy of Stan Laurel and Oliver Hardy, who seemed to be on our portable screen every Christmas in the musical Babes in Toyland. Yours, too?

As “Stannie Dum” and “Ollie Dee,” Laurel and Hardy are the comic relief in a plot – creepy, if you think about it – about a sadistic miser and his band of bogeymen who terrorize a village full of “Mother Goose” characters. (You might also know Babes in Toyland under its reissue title, March of the Wooden Soldiers, bestowed upon the 1934 L&H version so watchers weren’t confused into thinking this is the really lame ’60s Disney remake.)

Despite its entertainment value, Babes isn’t tip-top Laurel and Hardy, which I learned as I sought out more-typical L&H fare – now available on DVD and occasionally on TCM. Those films more distinctly establish the funsters’ typical qualities – theirs is no straight-man-and-comic match, but a relationship in which rotund, impatient Ollie is only marginally smarter than slim, childlike Stan. Part of the joke in their typical “another nice mess” is that Ollie thinks he’s a mental giant in comparison. 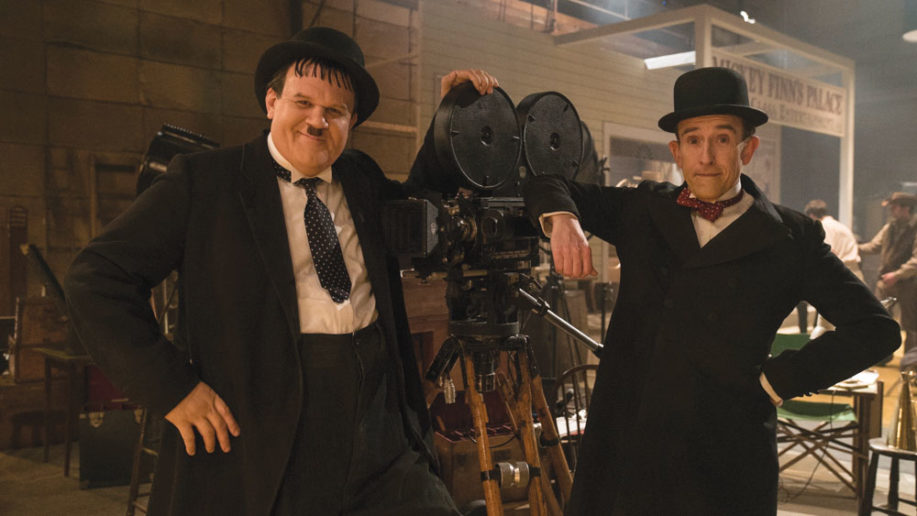 Whether they are cheating on their wives (as in Chickens Come Home, their best short) or outfoxing gold robbers (as in my favorite of their features, Way Out West), the two fill our time with gentle camaraderie to balance slapstick gags with elongated physical setups that stand in contrast to the punchy verbal jousts of, say, the Marx Brothers.

I bring up Laurel and Hardy here because, against all odds, they are returning to the screen – sort of. Steve Coogan and John C. Reilly co-star in Stan and Ollie, which, if we are lucky, is slated to open near to us (check your local listings) in late December or January.

The trailer is promising, although some purists are lamenting that this is not a genuine full-length bio, but more a snapshot of the late-in-lives relationship between the two comics (who are shown on tour in Laurel’s native England in the early ’50s). The resemblances between the actors and their subjects are uncanny, however, and I promise to keep an open mind.

Meanwhile, in my Flint Institute of Arts abode this month, there are two newly slated titles set for view in the Friends of Modern Art film series. An American comedy, Hearts Beat Loud (December 7-9), with Nick Offerman and Toni Collette, will be followed by a drama, Puzzle (December 14-16), in which a housewife (Kelly Macdonald of Boardwalk Empire) becomes passionate to solve jigsaw puzzles. For more info, visit FlintArts.org, call 810.234.1695 or just show up shortly before 7:30 pm on Fridays and Saturdays, 2pm on Sundays.