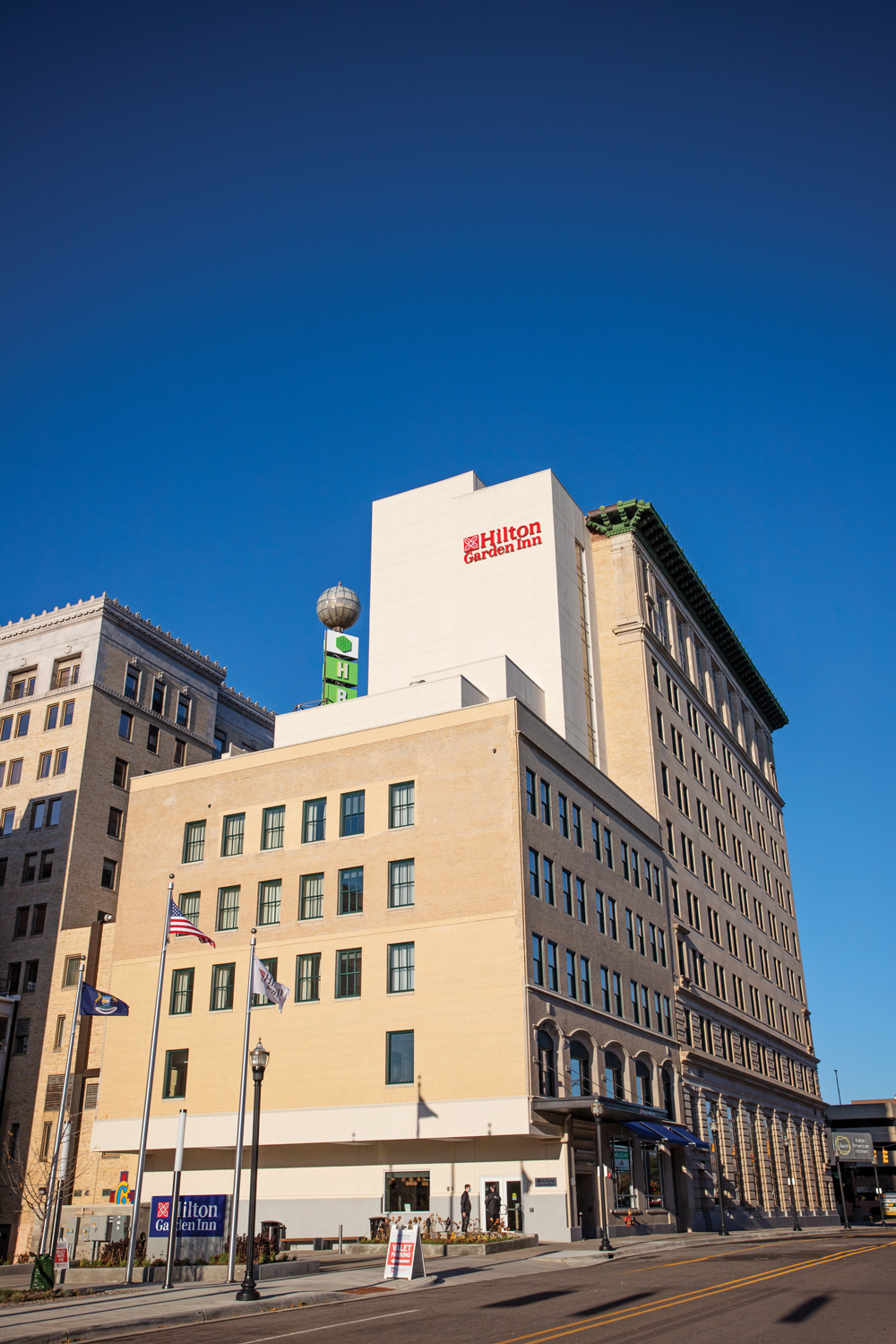 The Genesee County Savings Bank has a long history in the City of Flint. Founded in 1872, the bank employed a majority of the city’s most influential persons including William Wallace Crapo, Charles Mott, Josiah Dort, Arthur Bishop and William Atwood. As the bank continued to grow, a new building was needed. Built in 1920 at the corner of Kearsley and Saginaw Streets, it became a Flint icon and, after a major renovation in 1947, changed hands multiple times before falling vacant in 2000. This year, the building will open its doors once again as the new Hilton Garden Inn Flint – completely renovated and a wonderful representation of the city, its past and future.

“It represents Flint’s future look and feel,” says Tim Herman, President of Uptown Reinvestment Corporation (URC). “We are all very excited.” A URC project, the $36.5-million, 148,000-square-foot building rehabilitation is a major piece of the city’s resurgence. The ability to offer an awe-inspiring place for travelers to stay while they conduct their business and enjoy the city is paramount when presenting the new face of Flint. “All of the other area hotels are great – they really are,” says Herman, “but Flint needed a hotel at its heart. It’s the missing piece of the puzzle.” 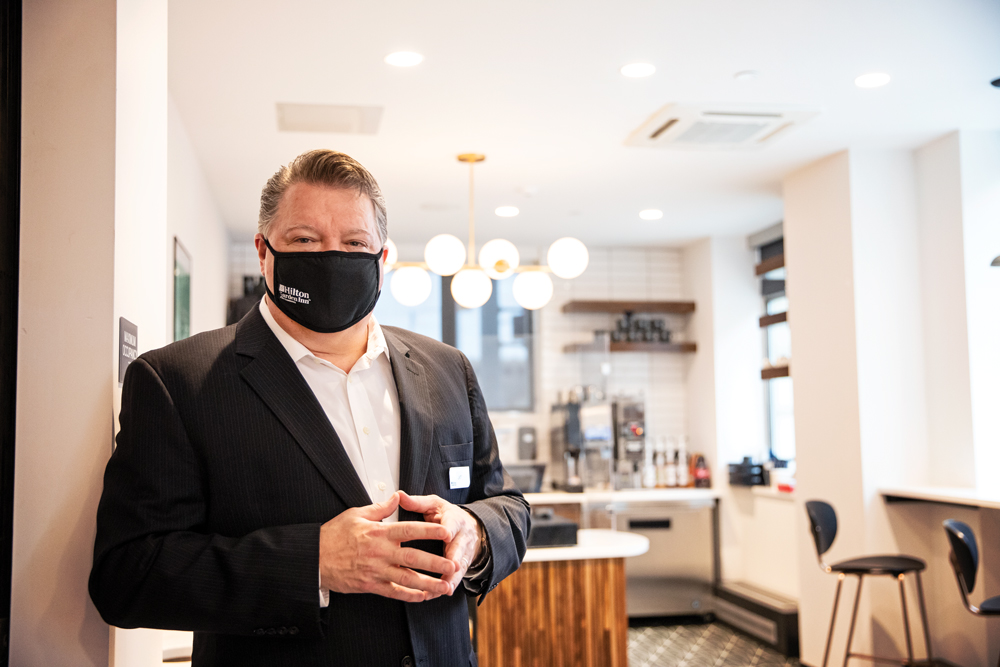 “What’s unique about this hotel is how much love our staff has for it and for the city.” 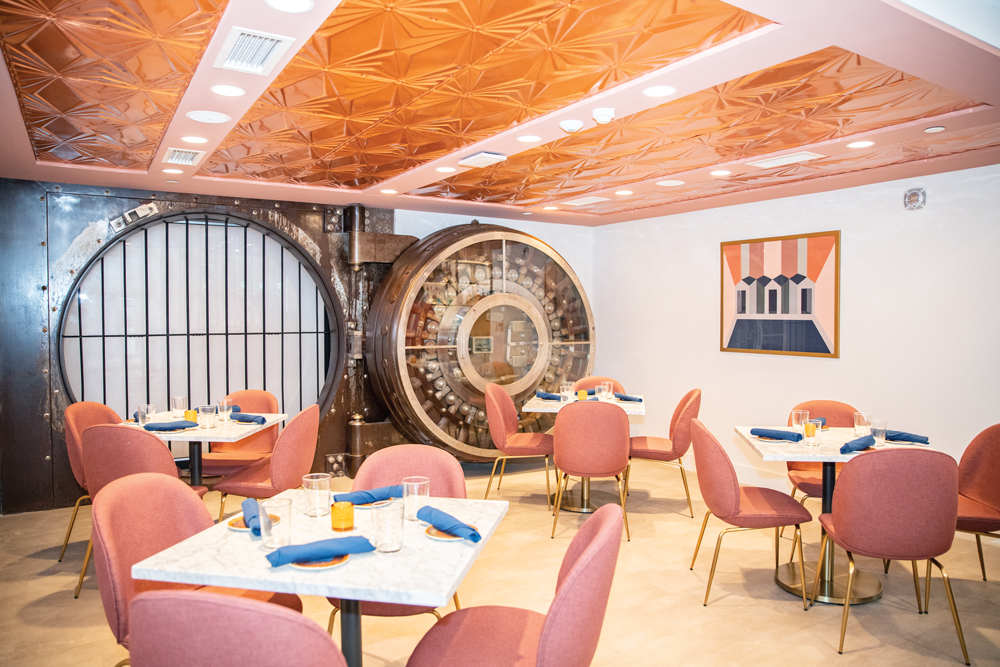 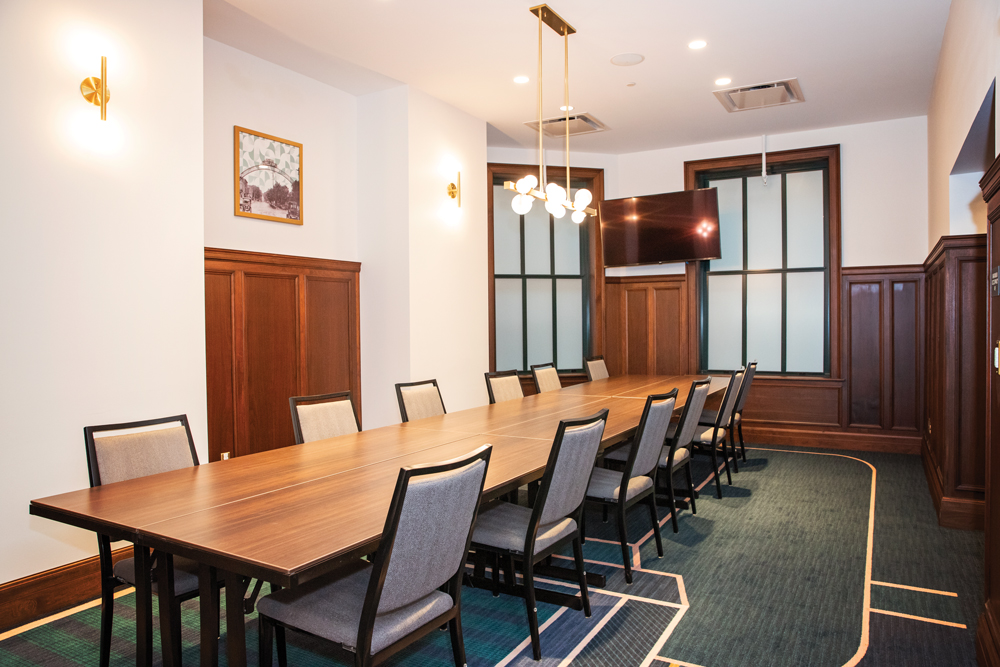 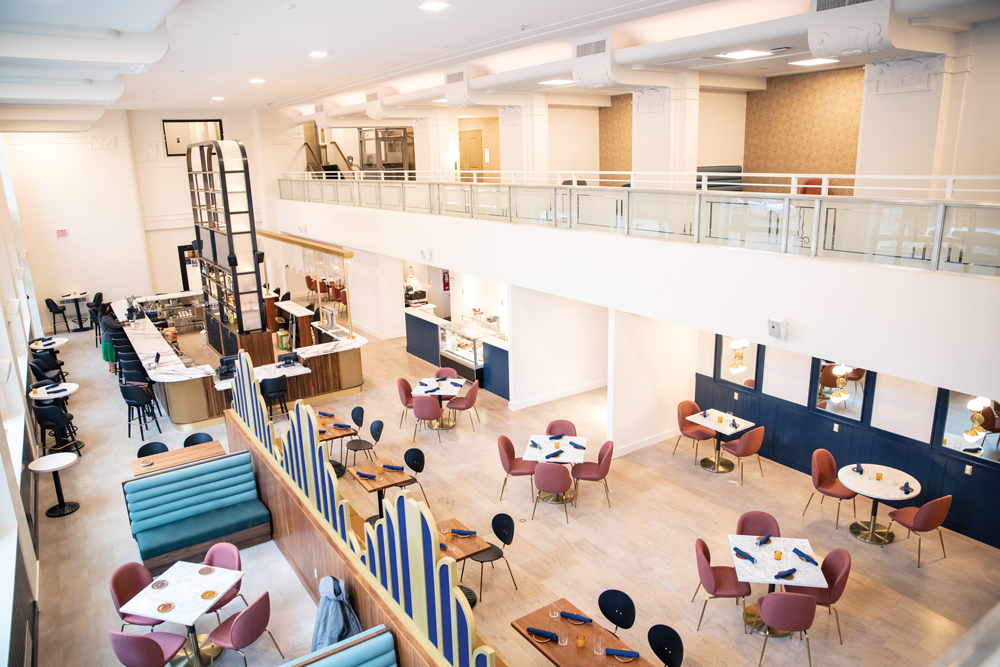 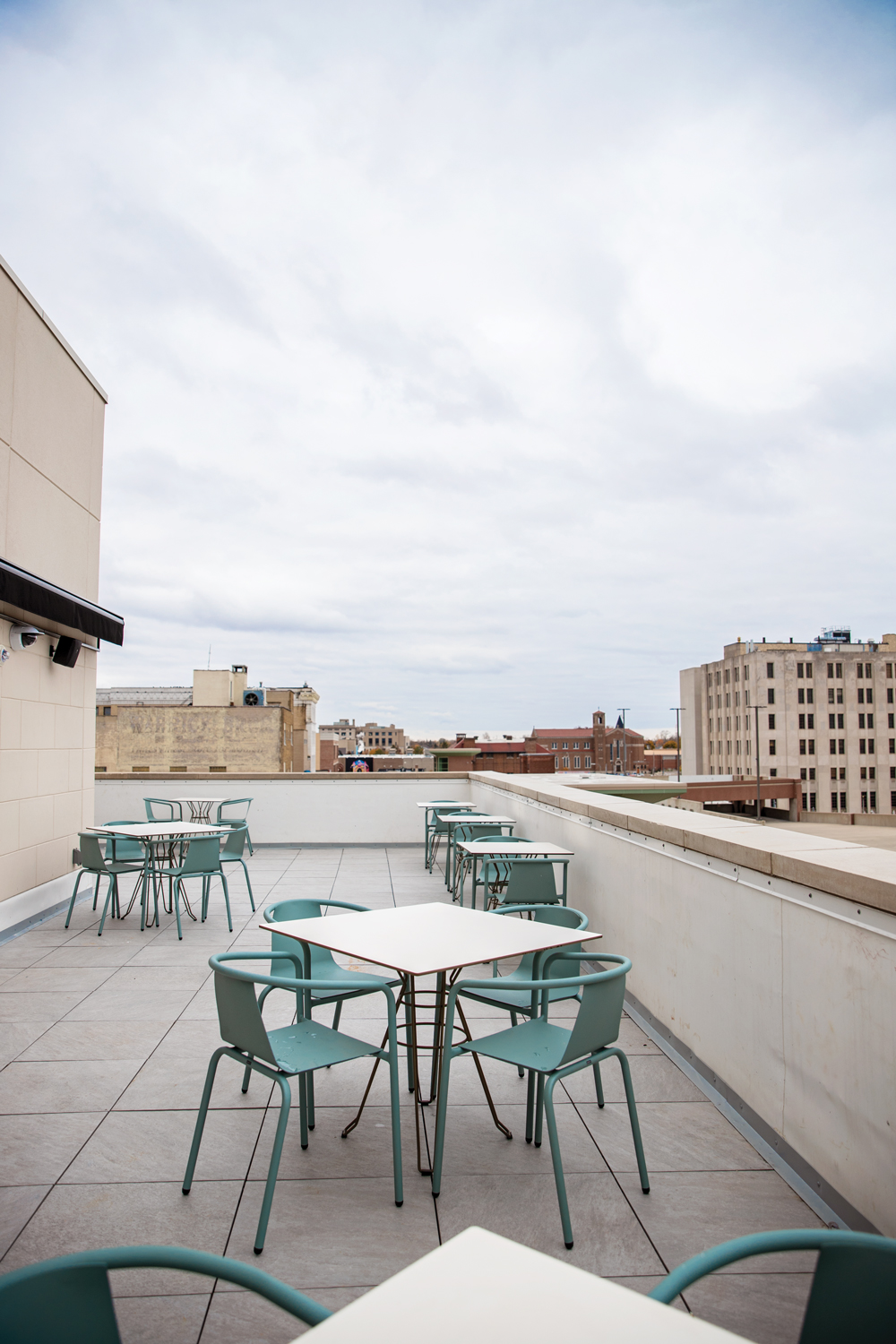 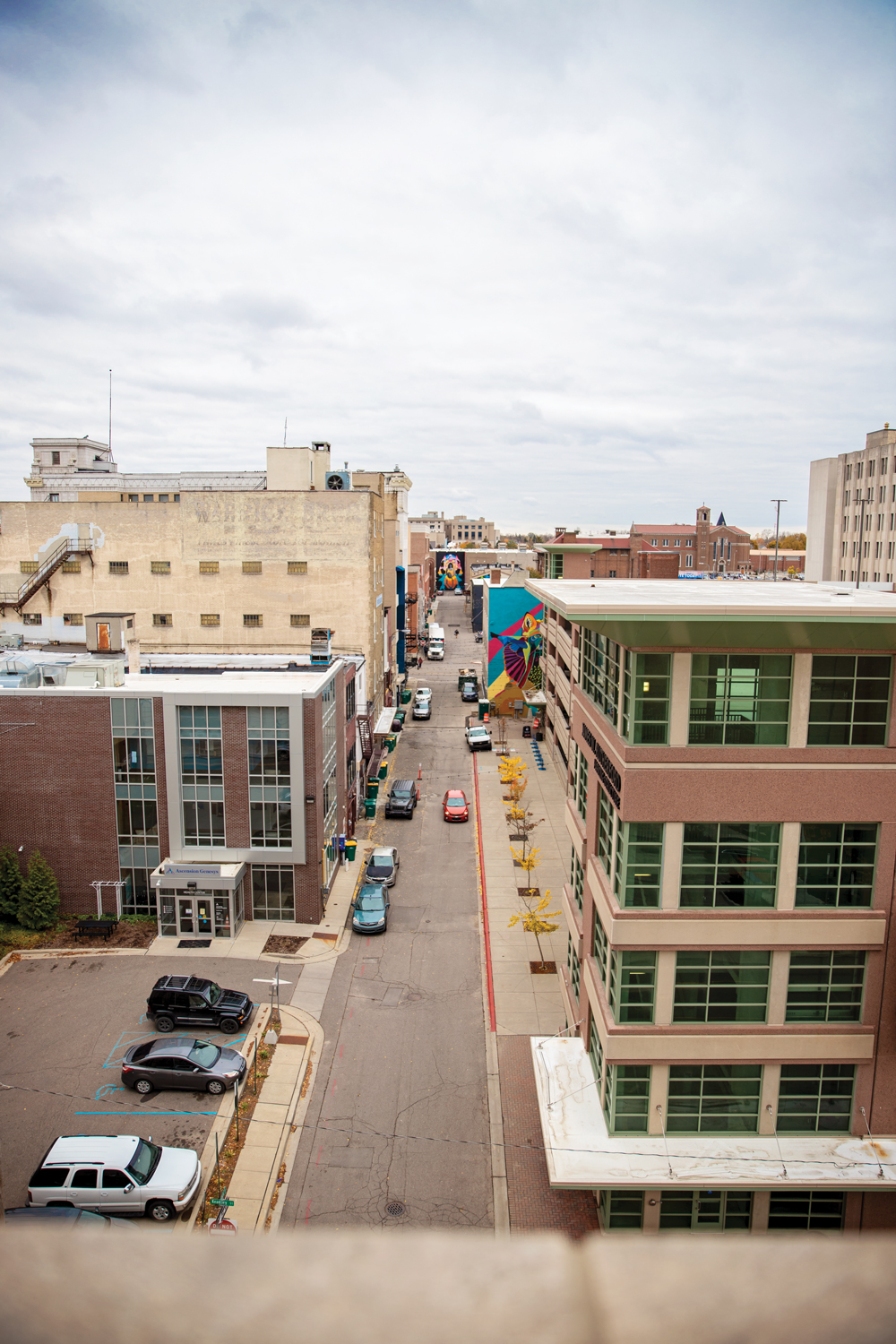 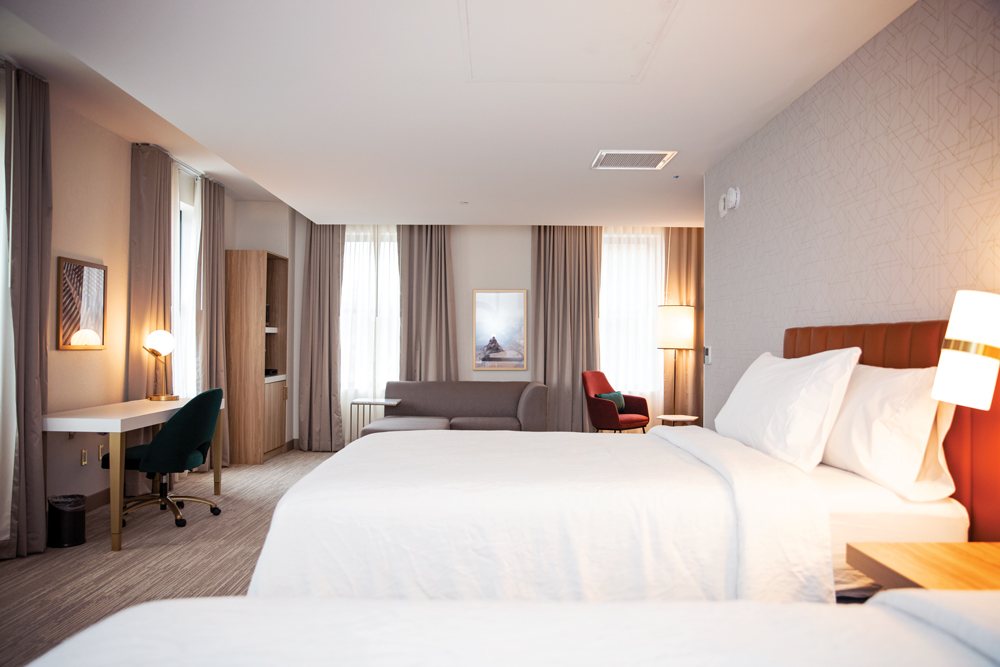 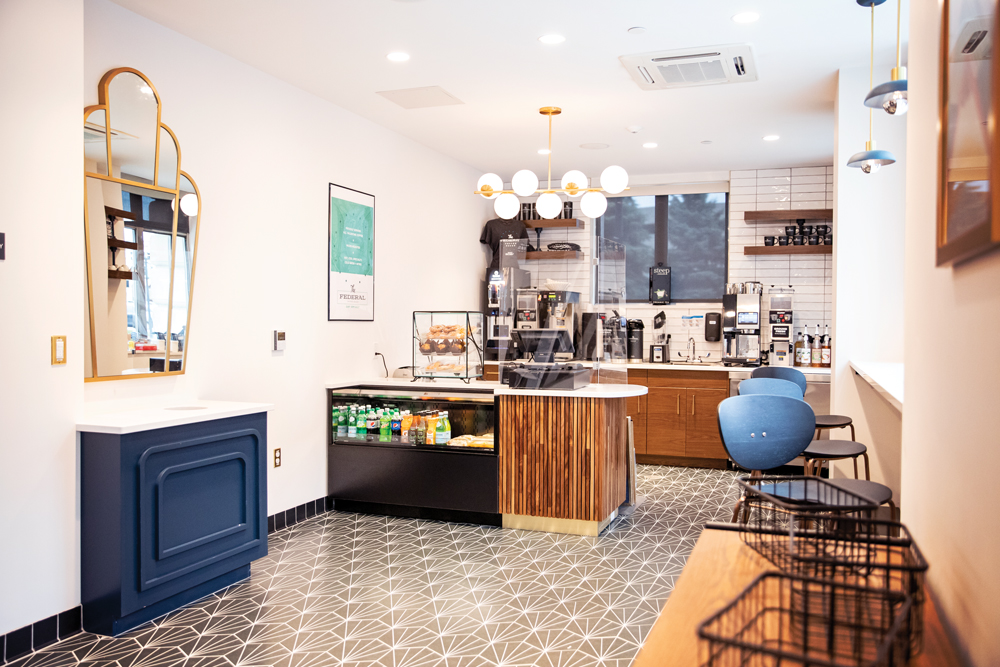 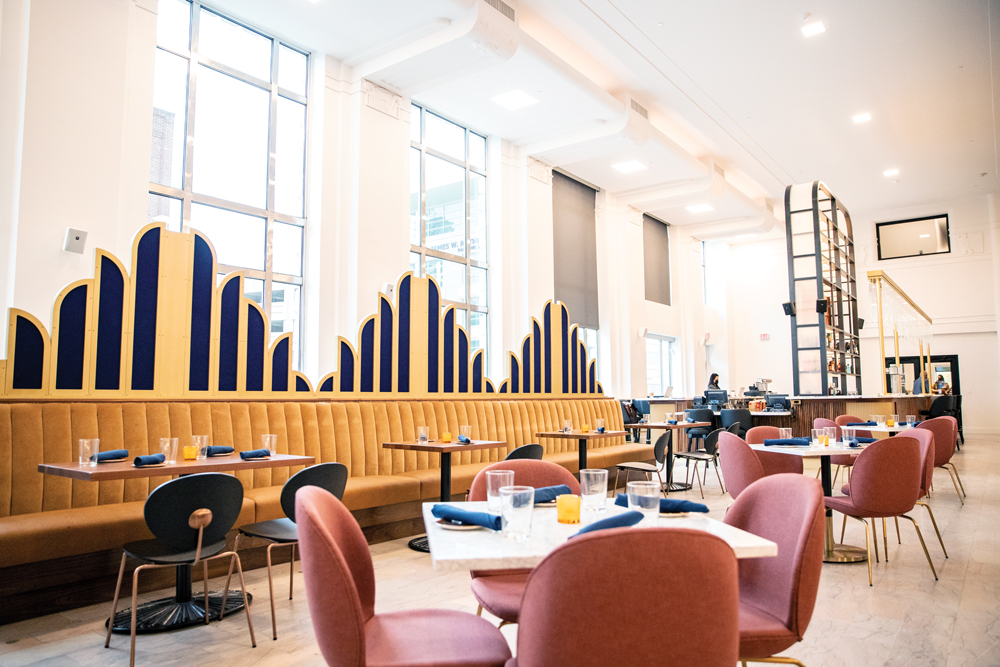 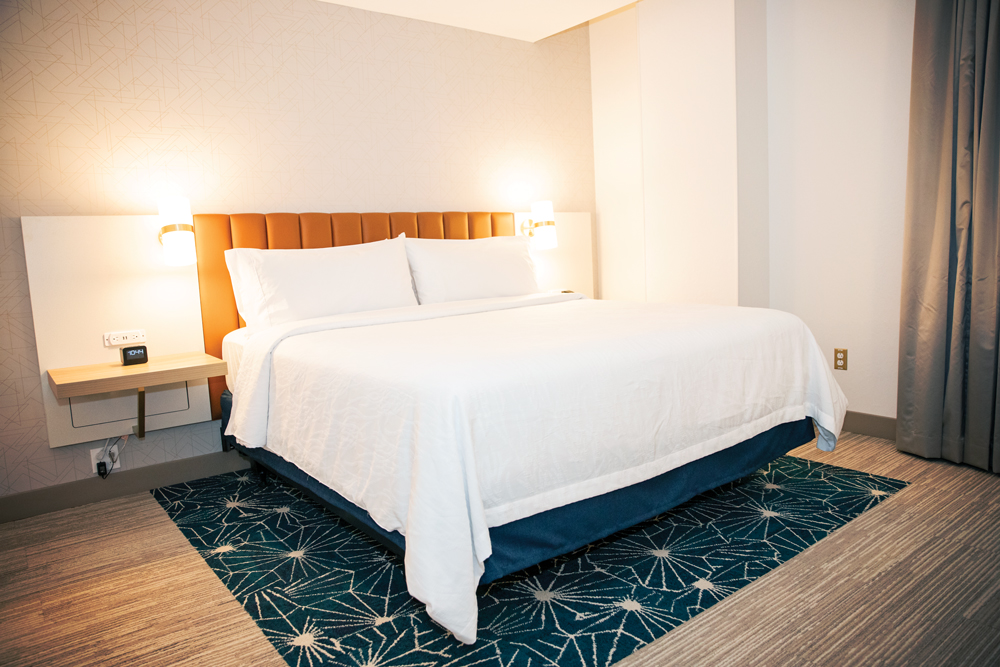 URC received a $9.45 million grant from the Charles Stewart Mott Foundation, a $7.95 million Michigan Community Revitalization Program performance-based equity investment from the Michigan Strategic Fund, and support from other local partners such as Huntington Bank, Community Foundation of Greater Flint, Local Initiative Support Corp. Flint and Old National Bank. “I cannot express how grateful we are for the support from our partners in this,” adds Herman.

Inside the hotel, Flint’s past and future collide in an impressive display of history and style. “We kept as much of the original building as we possibly could,” explains Herman. “The glass above the restaurant, the staircases, the old doorways, the molding and even the wood paneling in a few of the meeting rooms are authentic from the 20s and 40s. Throughout the building, we even have old mail chutes here and there.” Walking the halls, one gets a sense of returning to the Roaring Twenties in old Flint, when the automobile reigned supreme and the city was growing at a remarkable pace. The historical décor centerpiece is the original bank vault door on display in Sauce restaurant. “It’s absolutely huge! They must have kept a lot of money in there,” laughs Herman. Even the upscale meeting rooms pay homage to Flint’s past, each is named for important pieces of Flint’s history. You can hold meetings in the Mott, Chevrolet, Durant, Dort and Buick rooms.

“Flint needed a hotel at its heart.
It’s the missing piece of the puzzle.”

The Hilton began taking reservations on November 2. Hotel guests enjoy cozy rooms with ample closet and bathroom space. The rooms are designed in at least a dozen different layouts, making each stay a new experience. Looking out a window with a view of Saginaw St., it’s easy for guests to imagine seeing the crowd during the start of the Crim or the hundreds of cars and attendees of Back to the Bricks. On the fifth floor, the view from the Simmer Rooftop Lounge is equally inspiring. From above, the old and the new merge to depict a road from where Flint once was to the future it is headed toward. The murals down Buckham Alley, the green of Chevy Commons, the UM-Flint, MSU and Kettering campuses all add to a sense of Flint’s destiny in a single panoramic image. 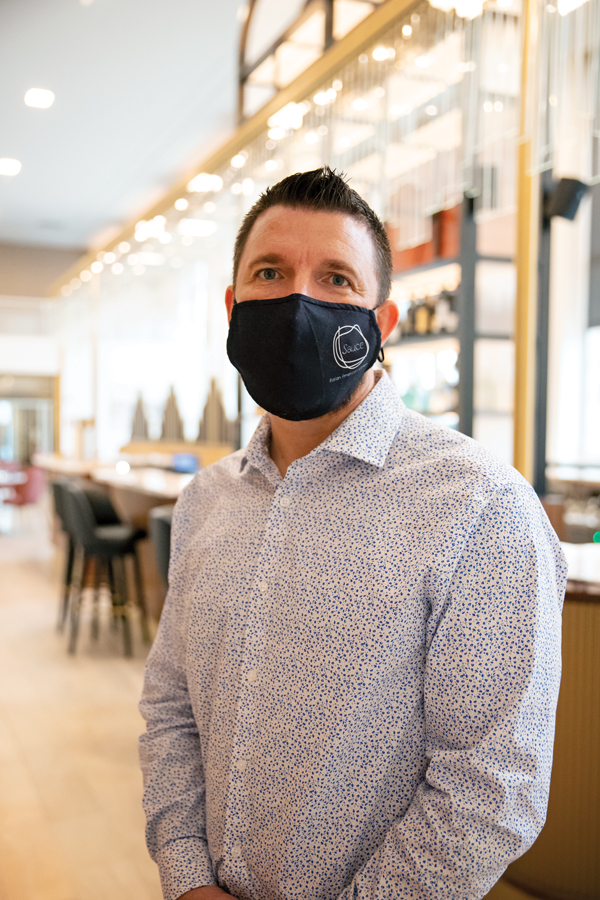 Five floors below, Sauce Italian American Restaurant, under the direction of Food and Beverage General Manager, Dan Wright, offers an interesting mix of culinary delights and craft beverages. The menu incorporates Michigan-made ingredients under the direction of Executive Chef and Flint-native, Antwain Trimble. Sauce is open to the public Monday through Thursday from 6am to 9pm and from 6am to 10pm on Friday and Saturday. Breakfast is served an hour later Saturdays and Sundays at 7am. Starting in spring 2021, Simmer Rooftop Lounge will offer elegant small plates, summer cocktails and live entertainment at least twice a week. The lounge will be accessible through the hotel lobby and elevator to the fifth floor. Those who are on the go in the morning and need a pick-me-up can pop into Federal Coffeehouse on the ground floor, inside the Sauce Saginaw St. entrance.

The hotel will be managed by Crescent Hotels & Resorts and General Manager, Jeff Stableford. “I jumped at the opportunity to come back to Flint and operate an integral piece of Flint’s resurgence,” says Stableford. “What’s unique about this hotel is how much love our staff has for it and for the city. This is their home and they all want to make a positive impact. Our people and customer service will make this place stand out among its peers.”

For Downtown Flint, a picture is beginning to emerge of a city determined to succeed despite everything that has worked to tear it down, and the Hilton Garden Inn Flint is just one more step toward future prosperity and world-wide respect. Despite the pandemic, the hotel is already filling and many believe it will be a rousing success. “We have amazing people working here,” says Stableford, “and it’s an absolutely wonderful building.”