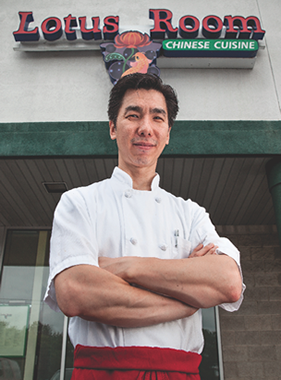 Here’s a little secret for all the Chinese food lovers out there: you can find fresh, authentic Chinese food at the Lotus Room, hidden in the Torrey Hill Plaza in Flint. Owner and cook Jack Yang says it’s not a typical Chinese restaurant with heavy décor and over-salted food. Instead, the small and simple space, which seats approximately 32 guests, is decorated only with miniature silk Chinese dresses on wine bottles. The menu is also small, but Jack proudly prepares each dish with the finest ingredients.
Since opening Lotus Room approximately six years ago, Jack has developed a group of loyal patrons. “Some of my customers just call it Jack’s Place,” laughed the owner. And cooking Chinese food is something that comes naturally to him, as his family owns the Empress of China, a well-known Flint restaurant.

Jack grew up work ing alongside his family in the restaurant and was taught how to cook by his father, Ping His Yang. “To me, cooking is an art form,” says Jack, who puts as much care into the presentation of the food as he does in its preparation. If cooking is an art form for Jack, his meals are meant to be appreciated by guests with all of their senses. “First, you eat with your eyes, so the food must look appealing, and then with your nose as you inhale the aroma. The final sensation is taste,” he says. And the freshly prepared dishes he serves do not disappoint any of the senses, as noted in the many positive customer reviews one can find online.

Lotus Room Lettuce Wraps are also very popular, made with minced chicken, water chestnuts and mushrooms, sautéed and bedded on crisp rice noodles with fresh lettuce leaves for wrapping. Another favorite is the hot and spicy Imperial Garlic, a dish Yang created, made with chicken, beef or shrimp sautéed with lots of garlic and green and white onions in a spicy oyster sauce. “Some of the best dishes are the simplest,” Jack says of his food’s appeal. The soups at the Lotus Room include egg drop, hot & sour, and sizzling rice. Wonton soup is made from fresh wontons in chicken broth with shrimp, chicken and vegetables. The popular Lotus Special, hot & sour soup, is spicy and sour and made with chicken, shrimp and scallops.

What is the secret to the success of the almost-secret Lotus Room? “The food!” exclaims Jack, truthfully. “The menu is simple, which allows us to serve everything as fresh as possible.” One example of this is the Special Salad with black sesame seed dressing, which is only available in the summer months, as Jack refuses to serve greens that are at anything other than the peak of freshness.

Another factor that contributes to the restaurant’s loyal following is the personal attention paid to the patrons. Jack enjoys ping out of the kitchen to personally greet the diners. “We like our guests to feel welcome,” he says, and he’s also proud of his staff’s fast and efficient service. “I’m very fortunate to have great help,” boasts Jack. “The staff is like a little family.” But he is most thankful for the customers who have supported him and helped him keep his doors open, even in a challenging economy. In his spare time (which he says is very limited in the restaurant business) Jack enjoys spending time with his family, his wife Jiyung Kim and their two young two daughters. But opening his own restaurant has been a dream come true and has allowed him to indulge his creativity. “This is what I do best. This is who I am,” he says proudly.