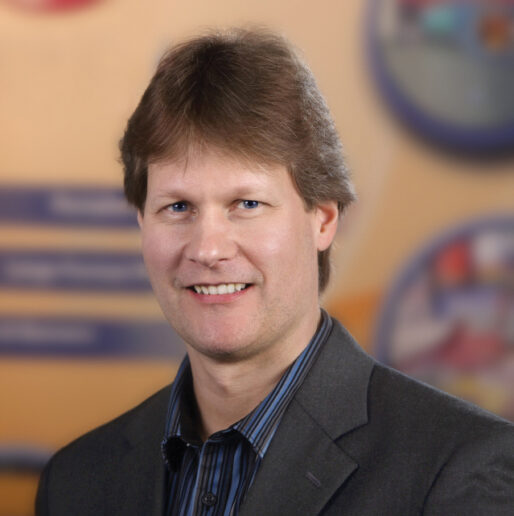 For artist Donald Cronkhite, every storm presents an opportunity. “In spring, I’m always looking for a good storm. They hold the best cloud formations, colors and contrasts,” he says. Cronkhite, the newest instructor at the Flint Institute of Arts, has a professional eye for the sky. He specializes in cloudscapes painted in such a way to capture all the emotion, drama and mystery of nature. “I want people to look at the world around us in a new way,” he adds. “Clouds are filled with emotion, turmoil and beauty, and I charge my work to express it.”

Cronkhite has painted all of his life and some of his oldest memories are of spending entire nights painting with friends, and visits to the Detroit Institute of Arts. “That is where my inspiration began,” he remembers. “My dad would take me there and I eventually started going on my own. I would find a painting and choose a small section of it to reproduce at home.” As an adult, he went on to receive his Bachelor of Fine Arts from Wayne State University and a full scholarship to study in Europe, where he took a full tour of everything the continent had to offer. While there, he was inspired by 17th century Dutch landscapes and 19th century French Avant-Garde works. “Traveling through Europe was amazing,” he says. “It introduced me to so much and I got a chance to study the works of The Masters. I mean, I was able to spend 15 solid minutes studying the Mona Lisa up close. Not many get that kind of chance.”

Cloud formations became a fascination when Cronkhite came to understand how the sky and its formations could open up a bigger world beyond the depicted scene due to the late works of Monet and Jacob van Ruisdael. The paintings of John Constable proved the potential inherent in cloud formations for expression of emotion, something that helped cement Cronkhite’s chosen subject matter.

“It’s a funny, funny little world that I get to share through art, and I love it.”

“Each painting I do is a replica of nature,” he explains. “When I see an interesting formation, I stop what I am doing and take about a thousand pictures. I use those pictures to create my paintings, only making minor changes. I keep the paintings as realistic as possible but because photos can’t reproduce what the eye actually sees, I rely on my memory and make changes on the fly. I may change the composition and change the colors to better express the sense of the scene.” When inspired, Cronkhite often works throughout the night. His paintings take over 150 hours to complete and are astonishingly large, often measuring 4’x6’. “I want to surround the viewer, immerse them within the realism. I want them to see all of the hidden intricacies in the dark as well as the light,” he says. “The more you look, the more surprises emerge. Everyone sees each painting a little differently. Clouds are both realistic and abstract at the same time.” Since 2004, Cronkhite has completed 47 large cloudscape paintings, numerous mid-size paintings and studies. 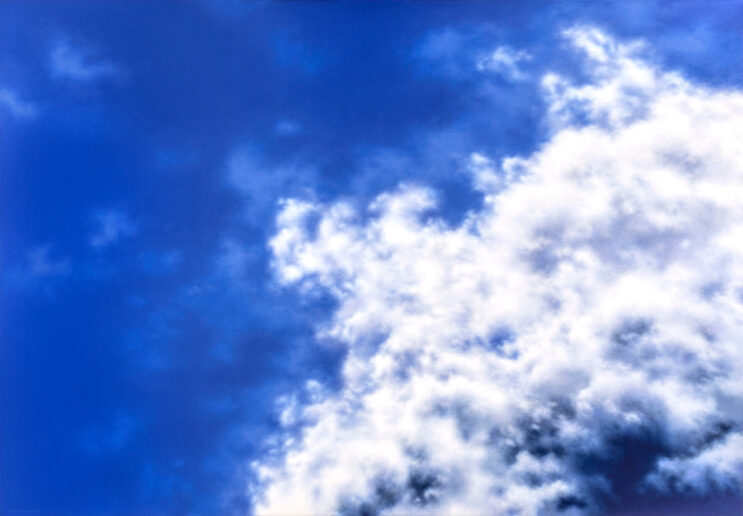 After returning from Europe, Cronkhite began an art career that has spanned two decades. His work has been featured in galleries throughout the Midwest, most notably the Gruen Galleries in Chicago, IL (since 2005) and most recently the Robert Kidd Gallery in Birmingham, MI. His cloudscapes have inspired countless exhibitions, won numerous awards, and select pieces are on permanent display at University of Michigan-Dearborn, Wayne State University, and our own Flint Institute of Arts.

Besides maintenance of a busy art studio, Cronkhite has taught at both the Grosse Pointe Artists Association and the Birmingham Bloomfield Hills Art Center for the last three years. His classes include “Painting the Dynamic’’ (making a painting pop), “Painting the Invisible” (the subtle nuisances that make a painting stand out) and others. And, starting in spring of 2021, he will be joining the FIA faculty to teach “Cloudscapes: Painting the Silver Lining.” “With this class, I want to share how to  express emotion through cloudscapes, how to change composition and work with color,” he states. “You know, the little secret things that make a picture seem real. I just want to help someone get better at what they love to do. I will tailor my style to help you.” 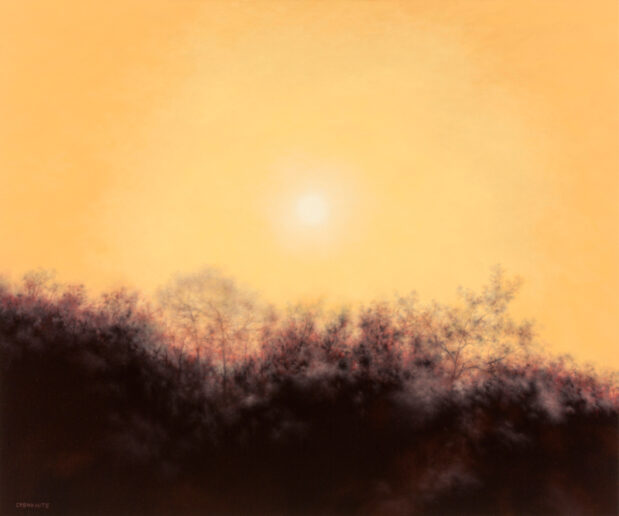 The current pandemic has caused Cronkhite to put quite a few unveilings and exhibitions on hold. However, he has been very busy, taking the time to perfect his current style while experimenting with a new approach. “I have been working on painting some sunnier skies and formations,” he laughs. “I am taking a chance that people want something uplifting after the year we have all had and I am getting very good feedback. But rest assured, I am still doing the stormier stuff.” And, recently, he has been able to schedule a solo exhibition at the Robert Kidd Gallery in Birmingham in May of 2022 and a two-man exhibition at the Black Box Gallery in Dearborn in January of next year.

Donald Cronkhite lives to paint. It is a love that has lasted his entire life and he has no plans to do anything else. When asked what he would consider a crowning achievement, his answer hearkens back to his childhood source of wonder. “Getting a piece in the Detroit Institute of Arts,” he smiles. “It would be like winning an Olympic gold medal for me. It would be absolutely pure bliss. You know, it’s a funny, funny little world that I get to share through art, and I love it.”

To view his artwork or to contact Donald Cronkhite, visit donaldcronkhite.com or @donaldcronkhite on Instagram. His paintings are available at the Gruen Galleries in Chicago and Robert Kidd Gallery in Birmingham, MI. For commissions, please contact him directly. 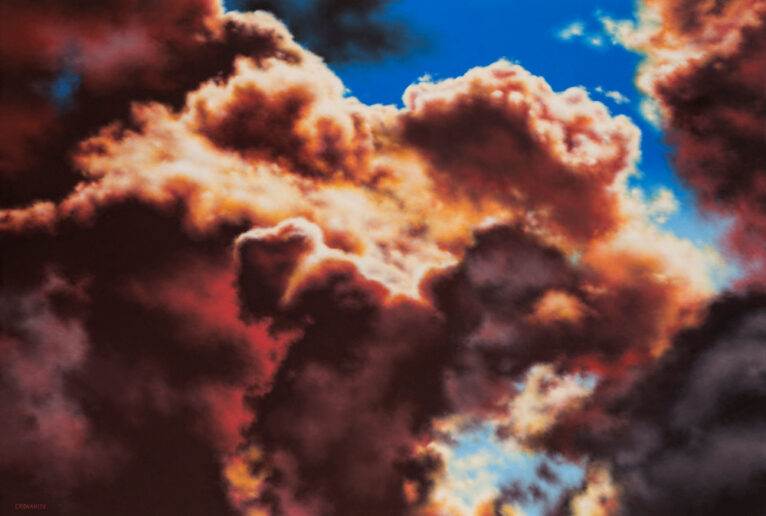 “This is the painting hanging in the Flint Institute of Arts. It is one of three in the series. Ten years ago, I came up with the study. The picture of the formation was taken during the day and in the evening, I observed a lot of color as the sky changed. I mixed the color with the day formation to create what you see. This is a painting that I consider one of my masterpieces and I felt that it fits in well at the FIA.”

“Another big one measuring nearly 93” long. This is one of my absolute favorites that I have done. It is full of turmoil and repressed kinetic energy. In the dark cavities, I mixed in little surprises and subtleties. There is so much excitement here.” 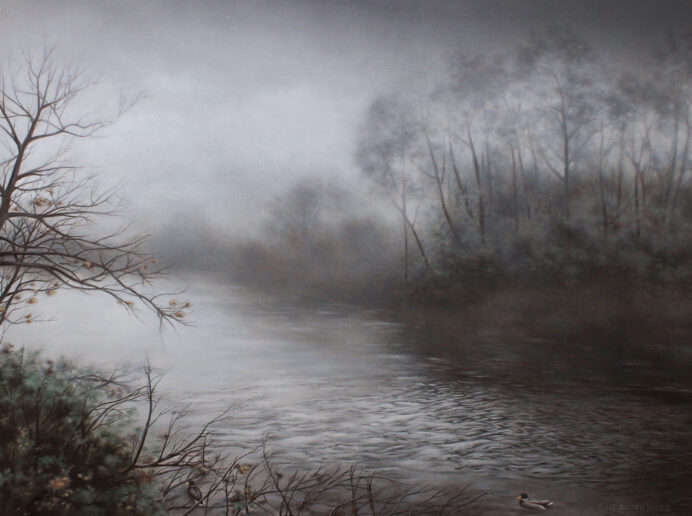 Nankin Lake, After the Storm

“This painting won me a solo show with the Grosse Pointe Artists Association. Nankin Lake is in Livonia and is always filled with birds and waterfowl. One night, a storm blew through that busted branches and trees and the next morning, it was absolutely beautiful with all the fog. The picture I took was perfect the way that it was and the painting is an almost exact replica of the scene.” 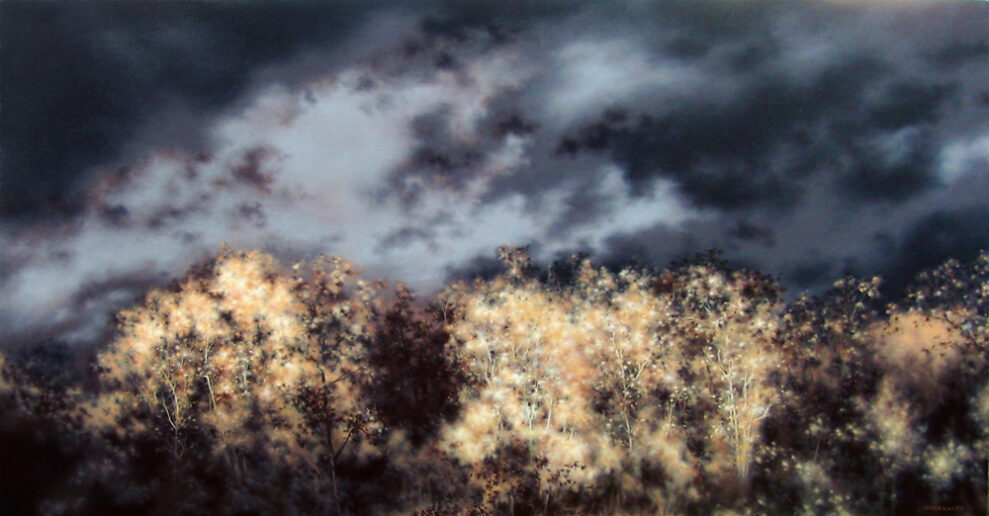 From Out of the Darkness

“This was a commission and is an example of why I like to paint in a larger format. This painting measures 36” high by 72” long. I felt that in order to get the full effect, the viewer had to be immersed completely in the atmosphere, it was only through the sheer scale of it that I could make it personable. I wanted the viewer to feel like they were there.”