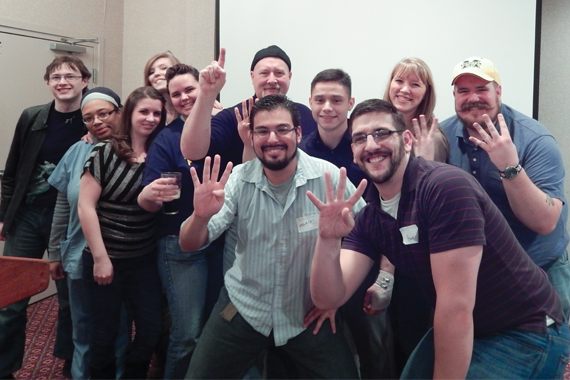 In the middle of March Madness, many Flint natives, especially students and alumni of the University of Michigan-Flint, look forward to a different kind of contest: the annual UM History Quiz Night. Hosted by the History Department, it is the brainchild of British History professor Dr. John Ellis, whose evident love for English pub quizzes prompted him to begin one in Flint. With support from past Department Chair Dr. Roy Hanashiro, attendance has ballooned in the past eleven years. The event changed locations as its popularity increased over the years, but it has now fittingly settled at the British-style pub, Firkin & Fox in Burton.

The 2014 Quiz Night fell on March 28, drawing the event’s biggest turnout to date. Registration began at 5pm, and by 5:20, the banquet room on the pub’s second floor was packed, nearly all the tables having been claimed by one of 38 participating teams. By the time the Quiz began a little more than an hour later, every seat was filled with 250+ attendees. Also on hand to aid Drs. Ellis and Hanashiro and provide team support were fellow History professors, Drs. Thomas Henthorn, Ami Pflugrad-Jackisch, and Mohammad Daassa.

Spelled out plainly beforehand, the Quiz rules are simple: five members per team, answers must be written on the teams’ scorecards handed in after each round, cellphones and Internet strictly forbidden, three “lifeline coupons” could be used to gain the help of a professor on any question, and most importantly, when the scores were tallied, the Quizmaster, Dr. Ellis remained the final judge.

The opening question was issued over the P.A. system with great animation, and a rhythm quickly emerged as the first round commenced. A hush would descend upon the crowd as the jovial voice of Dr. Ellis posed the question. Immediately following the question’s final syllable, a symphony of emphatic whispers, like a field of locusts, echoed throughout the room, followed by a chorus of pencils scratching on paper. After a few moments, the whispers were hushed once again by Ellis’ voice and the reading of the next question, only to be overtaken again by the cacophonous conferring amongst team members. Like tides ebbing and flowing, ordered quiet and urgent whispering succeeded one another.

Three rounds elapsed before a winner emerged, but in a small all those in attendance left the event a winner. The variety of the questions allowed nearly everyone to be the hero at one time or another, pulling a tricky answer seemingly from behind their ear, thereby scoring their team a point and elevating their ranking. The questions ranged in subject from obscure to recent, and one of the trickiest had to do with the recently rediscovered fragment of a pelvic bone believed to belong to an early British monarch. Even when the correct answer could not be recalled, humor filled the gap that memory and knowledge left, resulting in a lot of fun. No matter how you looked at it, the Quiz Night allowed all present to enjoy spending time with old friends and new friends alike while also learning, proving why this great event has endured and grown over the past 11 years. Dr. Ellis said he is proud that Quiz Night has become an annual tradition. “It’s fun to see how participation has grown to include not only our faculty, students and alumni but also their family and friends,” he said. “People look forward to it every year and it allows us to keep in touch with former students. I think it is great to be a part of something that so many people enjoy.”