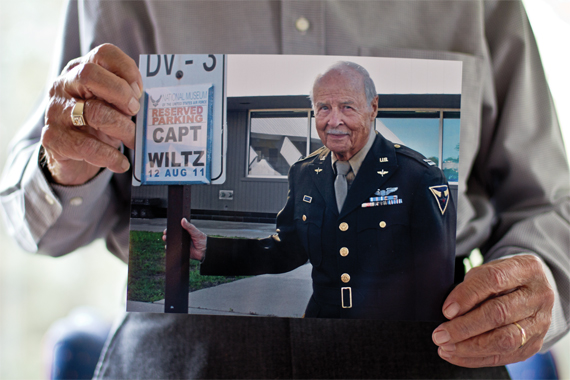 The month of November is dedicated to remembering and honoring our military veterans, and ceremonies are held in Flint and communities all around Genesee County on November 11, Veteran’s Day. Jack Wiltz, a handsome and spry 94-year-old, will be celebrating the day as a proud veteran of World War II. Jack and his wife, Joan, have been married for 64 years and they are enjoying their golden years in their Burton home and at their cottage on Lake Huron during the summer months. Jack spent a sunny afternoon talking with My City Magazine about his years in the United States Army Air Corps, which was the statutory forerunner of the United States Army Air Force, and later, the United States Air Force. Jack was a fighter pilot from 1942-1945, reaching the rank of captain and leading 104 successful combat missions. This is his story.

From the time he was seven years old, Jack dreamed of becoming a pilot. “I always wanted to fly,” he remembers. The future flier was born and raised in Flint, and entered the Army’s Civilian Pilot Training Program at Bishop Airport while attending Flint Junior College. “This was a great opportunity,” says Jack. “The Air Force was happy to have you; there was a shortage of pilots.” The surprise military strike conducted by the Imperial Japanese Navy against the naval base at Pearl Harbor occurred on the morning of December 7, 1941. The attack led to the United States’ entry into World War II, the bloodiest conflict as well as the largest war in history, involving virtually every part of the world from 1939-1945. “I was at Michigan State University in 1942,” Jack remembers, “and I enlisted in the Army Air Corps.” As a very patriotic and country-loving man, Jack was proud to serve: “I wanted to fight and defend my country,” he said. He received pilot training at various U.S. military bases, including those in Oklahoma and Texas, and on January 9, 1944, he was awarded his Pilot Wings.

Jack’s first mission took place on the island of Corsica in the Mediterranean Sea, off the coast of Italy. This was the first of many missions in France and Italy that put him in harm’s way. “I was in the first fighter group to fly a combat mission off of German soil,” he reminisced. Jack did most of his combat flying with the 27th Fighter Group of the 524th Squadron, and was the last commanding officer of the 523rd Fighter Squadron. The Airmen of the 523rd were among the most decorated USAAF units in the war, having fought in many of the Allies’ campaigns in the European Theater, including those in North Africa, Sicily, Italy, and Southern France.

Having flown 104 successful missions, Jack considers it “pure chance” that he made it home alive; not all were so lucky, including Jack’s good friend, Dean Willard, who was with him in training. Dean was killed on his first combat mission and buried in an unmarked grave in Germany. After the war ended, Jack went looking for his friend’s burial site, determined not to return home without finding him. His search ended in a German cemetery, when he came upon a grave with a cross marked “Unknown American Pilot.” Jack spoke with the sexton of the cemetery, who was in possession of some of the pilot’s belongings. Jack was able to determine that this was in fact the grave in which his friend was buried.

When the war ended, Jack remained in the Reserves for a few years, until he was again called to active duty. By that time, he had a family, and he gave up military life to meet his familial obligations. He finished his education at MSU and took a job at Crawley’s department store in Detroit, where he met his wife, Joan, whom he married in 1949. Joan says she worked on the second floor at Crawley’s and would find any excuse she could to talk to Jack, who worked on the first floor. “I had to; he was very handsome,” she laughed. “There were too many good-looking women working on the first floor and I couldn’t let him get away!” Jack later worked with his father, Welles Wiltz, and they co-owned a used auto shop for many years. Today, Jack and Joan have four grown children and 10 grandchildren. The couple has traveled to 28 countries since Jack retired.

The Wiltz’s home is filled with memorabilia from Jack’s time in the military, including many old photographs. On a shelf is a model Thunderbolt 347, the plane he flew during the war. “I loved that plane!” he exclaimed, “It was built like a tank. It brought a lot of pilots home.” His medals of honor from the war are prominently displayed on a wall in his office. “Brigadier General Backus presented me with the Distinguished Flying Cross in 1944,” Jack boasted. Other medals include Captain Wings, seven bronze medals, a Pre-combat Unit Badge, European/African/ME Combat badge, six major battle stars, seven air medals, an American Campaign Award, and World War II Service Medal. Jack used to attend reunions with fellow World War II veterans, but the number of those still alive is dwindling, he reports sadly.

Jack continued to fly for many years, and his family arranged a very special outing on his 80th birthday, which was featured on a TV news broadcast. On his 90th birthday, he visited the Air Force Museum in Dayton, OH. Jack has seen many changes in the world during his lifetime; a span of 17 presidents, beginning with Woodrow Wilson, who was the president in 1921, the year he was born. He spends time at the Elks Lodge in Flint, a fraternal organization, and with his wife. “I’m glad he came home,” says Joan, with a smile. “We’ve had a good life.”

Jack’s thoughts after experiencing 94 years on this earth? “You live in the best country in the world. Support your country. You are fortunate to live here.” 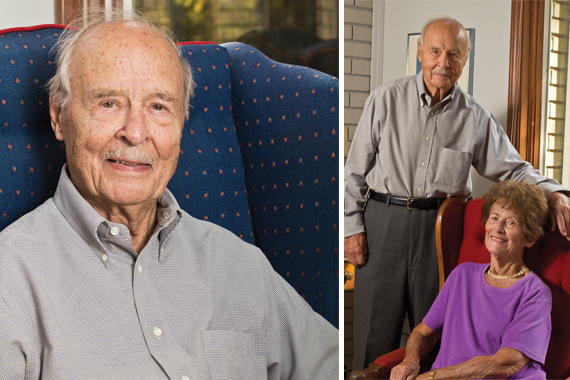