For our recent trip to London, at the top of the must-do list was taking the train from Waterloo to Hampton Court Palace. Of all the palaces in and around London, and there are a fair few of them, Hampton Court was really on my radar. For two Anglophiles like my husband and me, it seemed a Mecca, a holy grail of sorts for our interests. We’d watched so many BBC specials about the Tudor Monarchs, Castles of Britain, the Secrets of Hampton Court and all the like, that to actually have a ticket that would take us to a place almost mythical in its majesty seemed a dream come true.

I was completely giddy during the entire train ride from London and clutched at my husband’s hand, breathlessly whispering, “we’re really going!” over and over. Happily hopping off the train, we stepped onto the platform, and then creased our brows. It is unrealistic to assume we’d exit the train and the Palace would be standing just to our left, waiting to welcome us. It was a walk. Down the platform and out of the station and down the street and over the bridge and just a bit farther. Then, from the first front gates of the Palace, it was another long trek to the structure itself. The sheer level of expectation had built to the point I thought I might burst.

But, it was worth it. We had our tickets scanned and stepped through the second gate and into the forecourt of Hampton Court Palace – a place overflowing with our favorite thing in the entire world – British History. The Palace was Cardinal Wolsey’s forced gift to Henry VIII and then it was his residence, and that of Elizabeth I and the Stuart Monarchs, and the Georgians, as well. So much English history in one place, so many sections to explore and paintings to peruse and monarchs’ bedrooms to ogle. 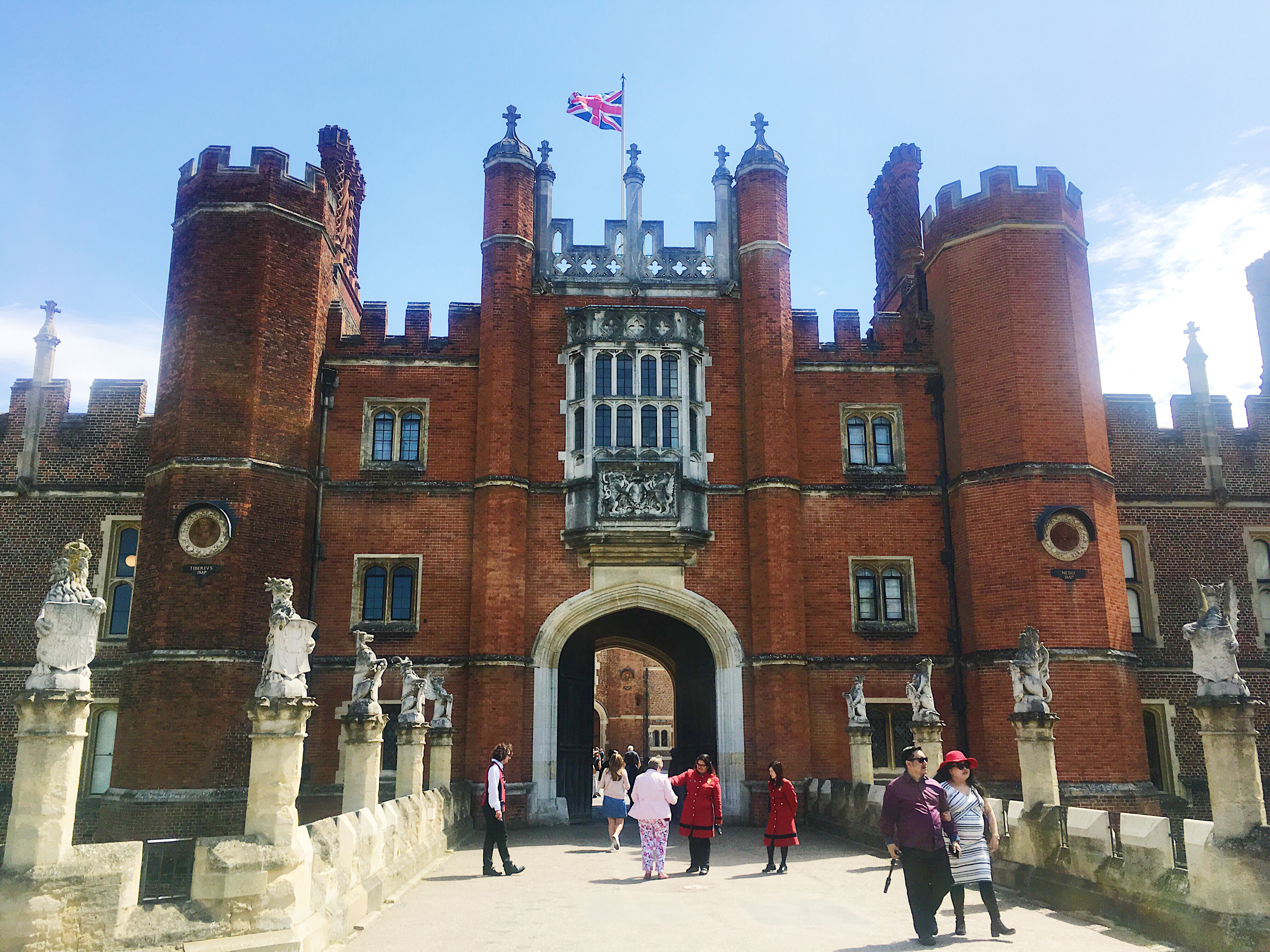 The building itself was almost miraculous to me. The stories of so many novels I’ve read having taken place within the walls, so many biographies and ghost stories of Katherine Howard running down the hall and begging for Henry to spare her from the chopping block. I could picture kings and queens in the chapel, and on the lawns and through the gardens. So many times in our travels, I’m captured by the feeling of walking in the footsteps of others or stepping back into time. But at Hampton Court, specifically, I felt oddly at home … as though all was where it should be and how I expected it.

Over our years together, we’ve been to many palaces and castles and fortresses, but this one pricked at my heart in a special way. It was Elizabeth, The Virgin Queen I grew up reading about and studying, her young and handsome father who tore apart a kingdom to marry her mother only to discard her many times over, and in the end, grew obese and cruel and probably suffered some kind of brain damage. If I squinted into the sun just right, I imagined I could see a young Henry VIII and Katherine of Aragon, or Elizabeth I, admirers in tow behind her.

All in all, it was less a visit to a palace than a first meeting of one I’d admired and read about and studied for so long. Entering within the Hampton Court walls was a rush of happiness at finding it real and solid, and finding myself inside its corridors and anterooms, staircases and gardens.
PhotoStockImage / Shutterstock.com