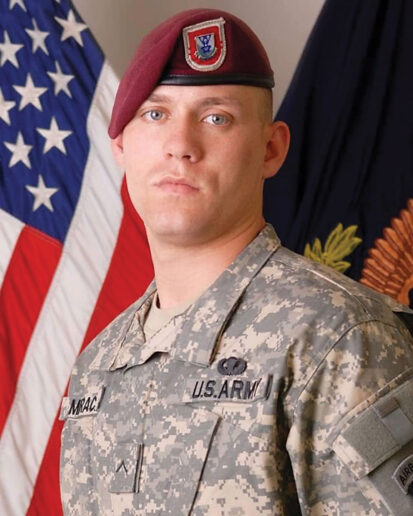 Who doesn’t look forward to opening specially wrapped boxes from friends and loved ones during the holiday season? Those boxes become even more meaningful when they’re received by members of the military serving their country in every part of the world, especially the most remote and dangerous areas.

Depending on the location of the deployment, receiving these boxes can be a true miracle when they contain the much needed and wanted items from home.

That’s why every box sent by Desert Angels, Inc., a volunteer faith ministry founded 20 years ago by Louise Downs Blain of Linden, is called a “Miracle Box.” 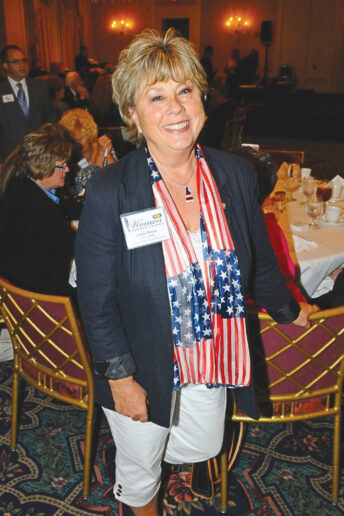 Blain said she attended the funeral for a young Michigan soldier named PFC Joseph (Joe) A. Miracle, who gave his life for his country on July 5, 2007. He had only been in Afghanistan for 25 days. “I did not know Joe, but went to the funeral visitation. On my way home, God put it on my heart to name our boxes ‘Miracle Boxes’ after PFC Joseph A. Miracle,” she said.

Each box contains a photo of Joe, a bit of information about his life and service, a note of encouraging words, a U.S. flag and a prayer cloth.

Desert Angels’ mission began in October 2001. Blain had been sending care packages to her best friend’s son in the Air Force. “He was stationed in the middle of nowhere,” she recalls. “He shared the contents of the boxes with others in his unit who asked, ‘Who sent these boxes? It must be an angel – it must be a Desert Angel.’” Hence, the name was born.

This was right after 9/11 and Blain said it was a time when Americans were frightened but determined not to let the attack shake their resolve. Kindness, generosity and patriotism were among the positive results of the tragedy. “We were attacked. We were all united and couldn’t do enough for each other,” she said.

As for her new mission, Blain said, “God directed it. He used me and taught me everything.” She provided an example of divine intervention with the story of a large supply of oral hygiene products that was donated to Desert Angels. The boxes happened to go to a military drug patrol ship off the coast of South America. “Due to prisoners aboard the ship, they could not go into port to get these products,” she said.

So, what goes into these Miracle Boxes? They contain holiday items, socks, personal care products, toiletries, sun block and wipes which are especially in demand. Snack packets with crackers, hard candy, cookies, tea, coffee, nuts, dried fruit and anything that can be mixed with water are much appreciated, as are fun things like playing cards, crosswords and other small puzzle books. “We encourage people to purchase items for the boxes and they are beyond generous,” Blain said. 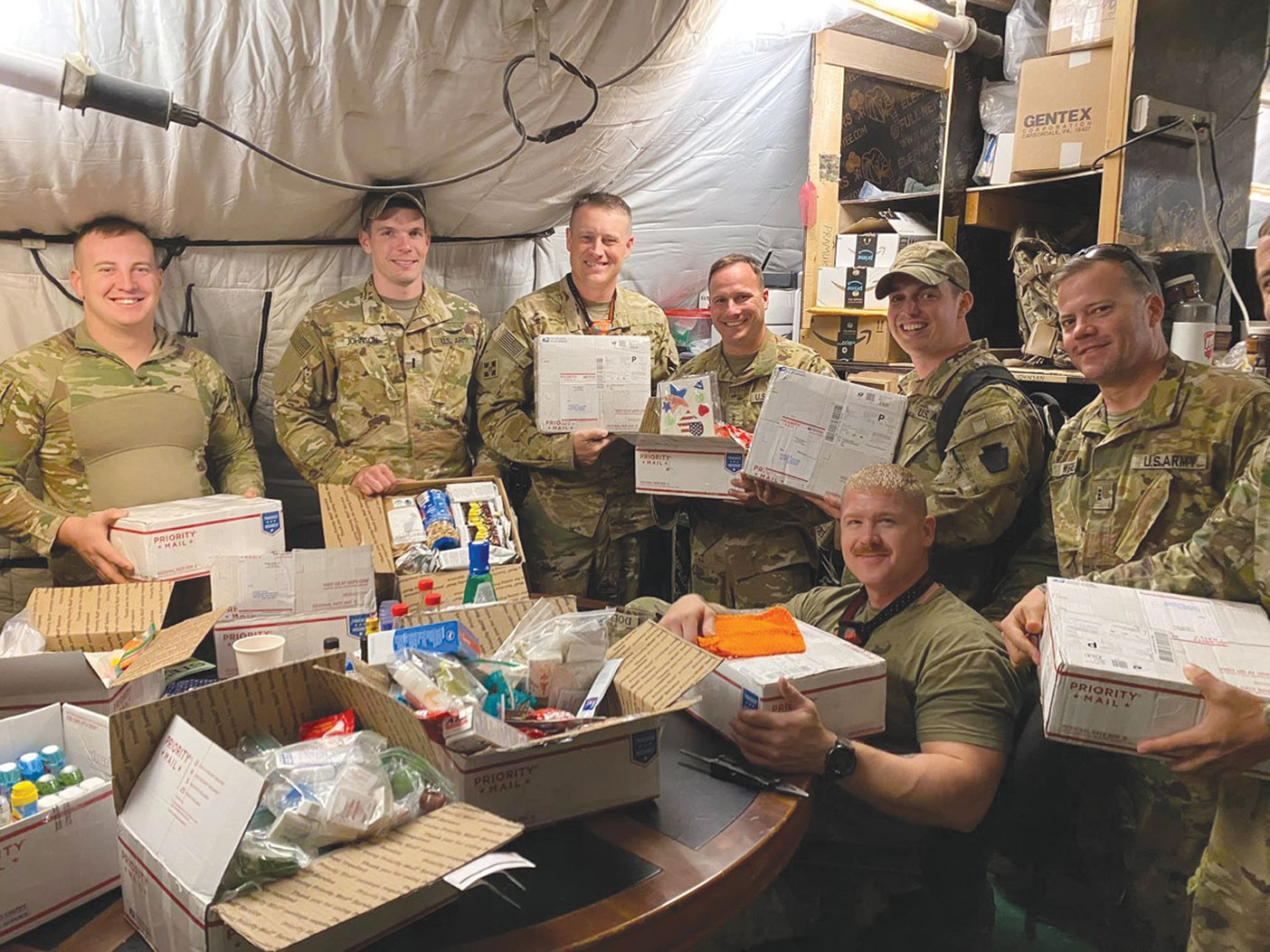 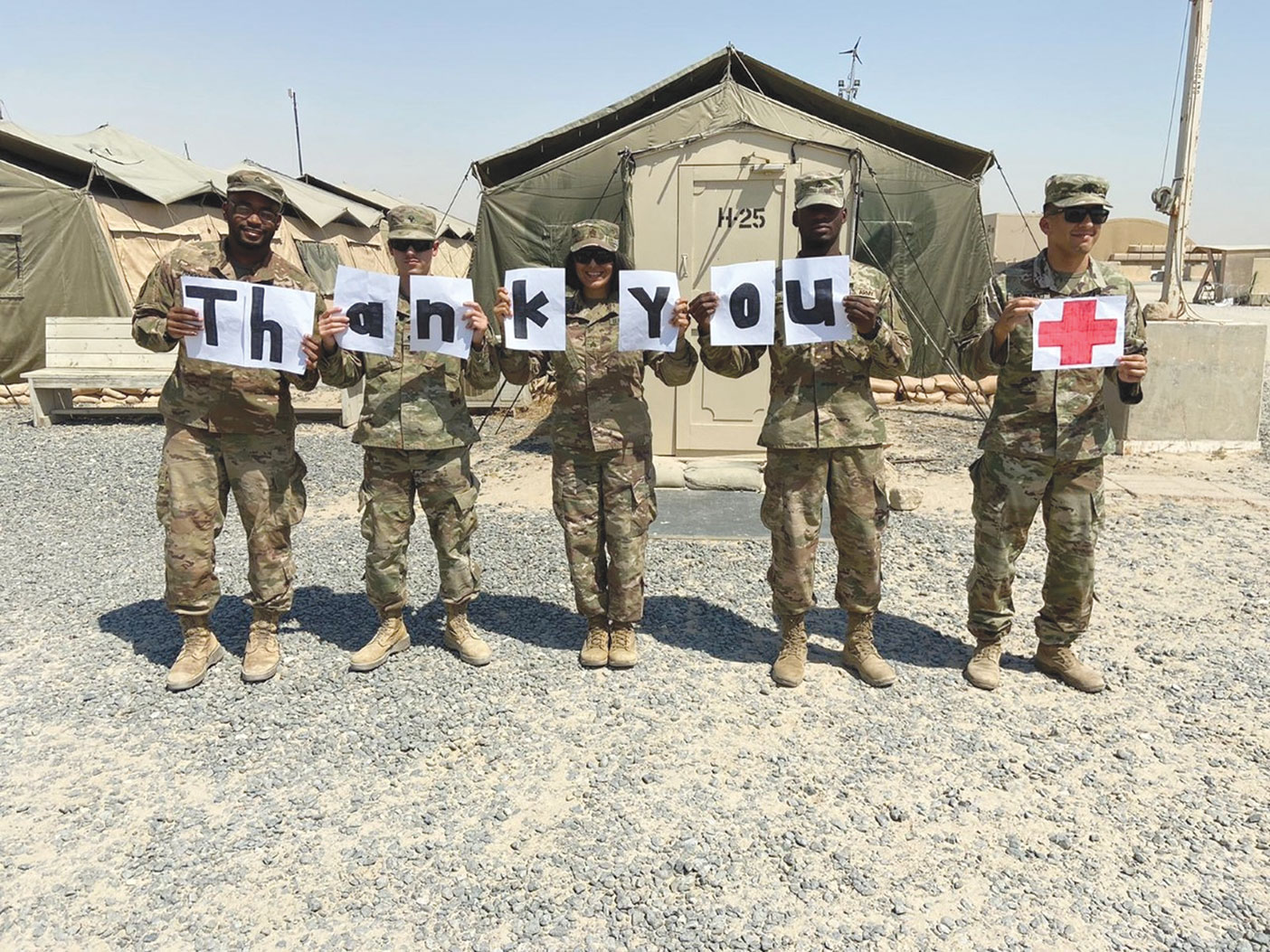 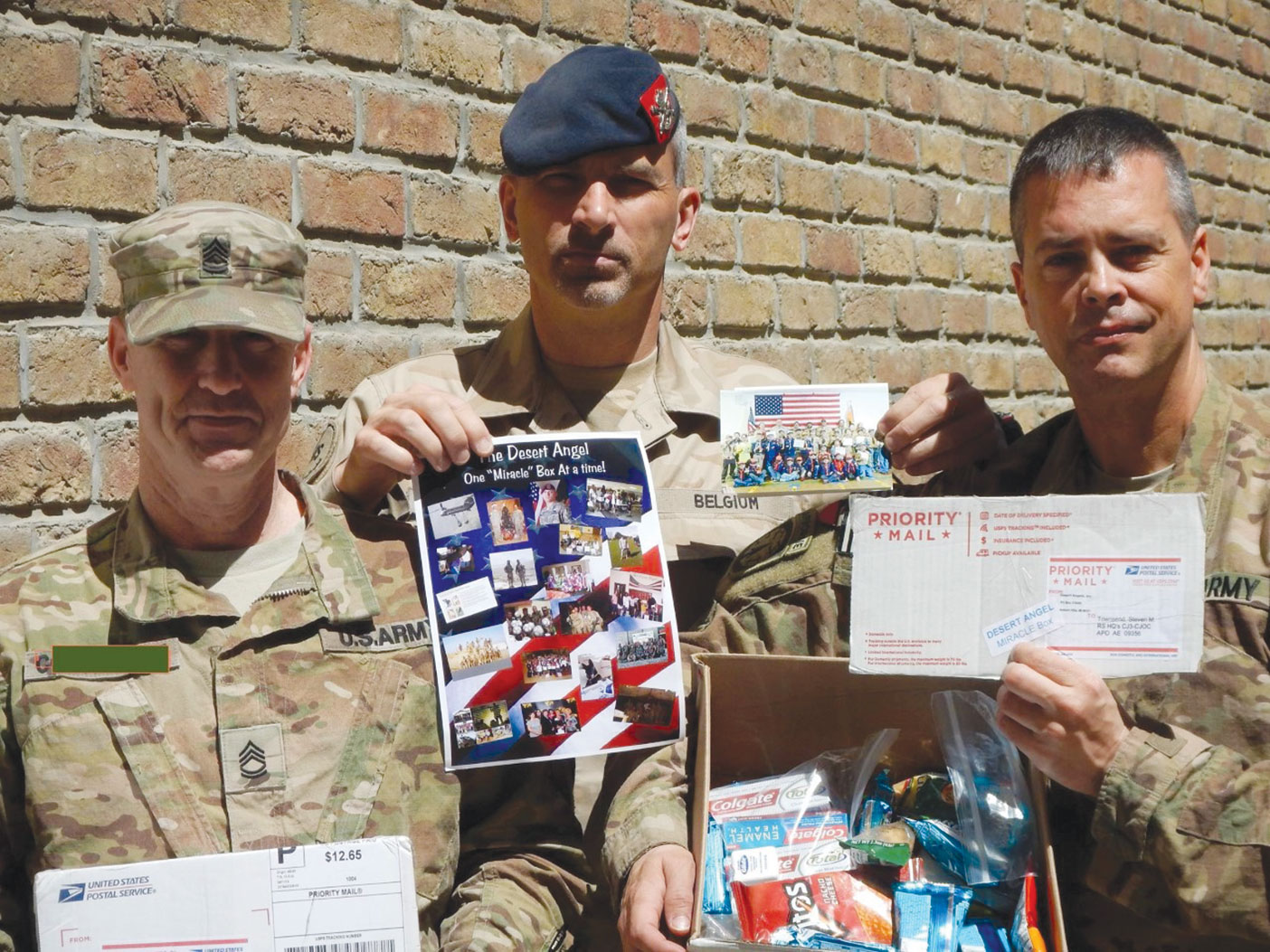 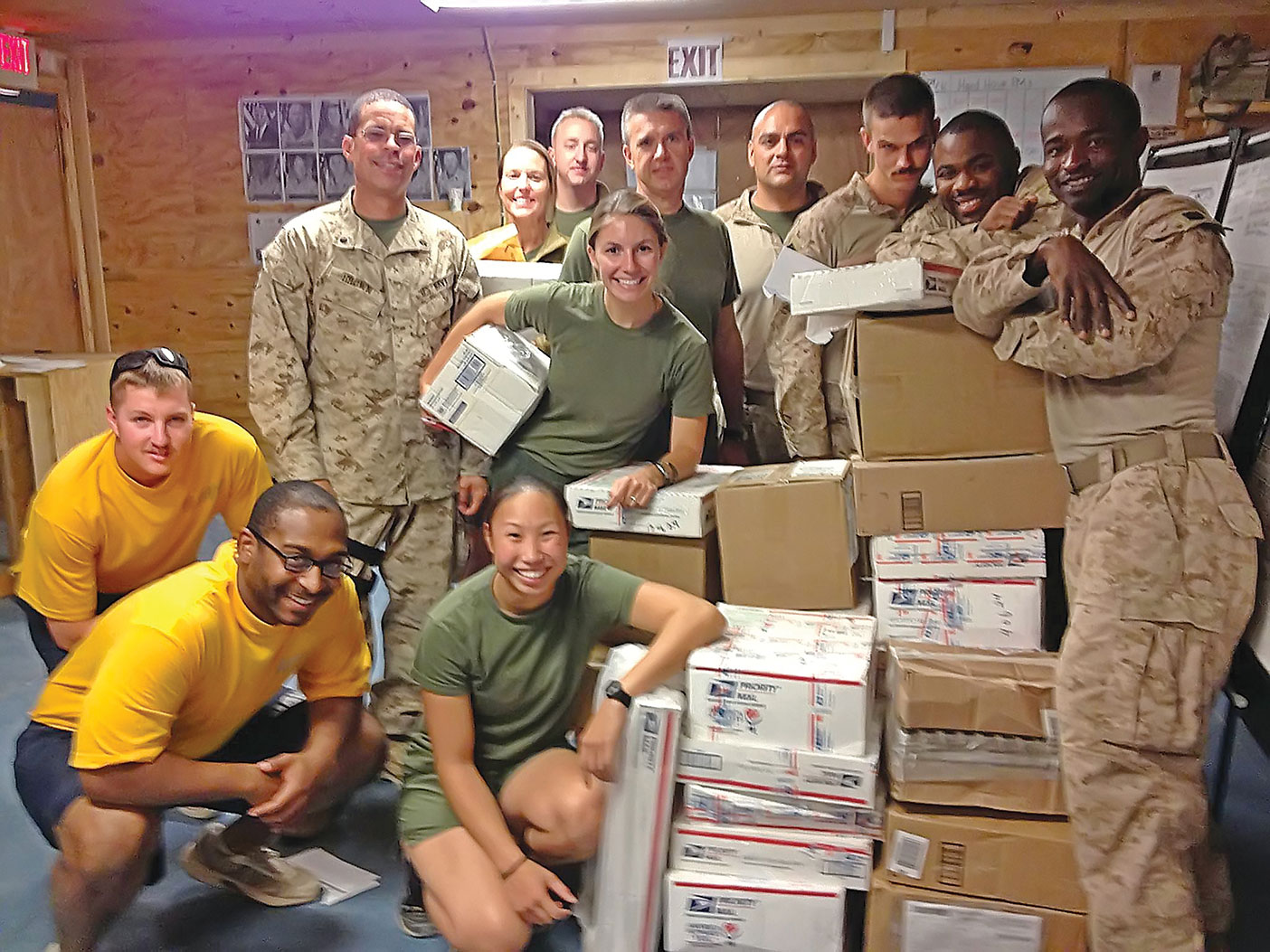 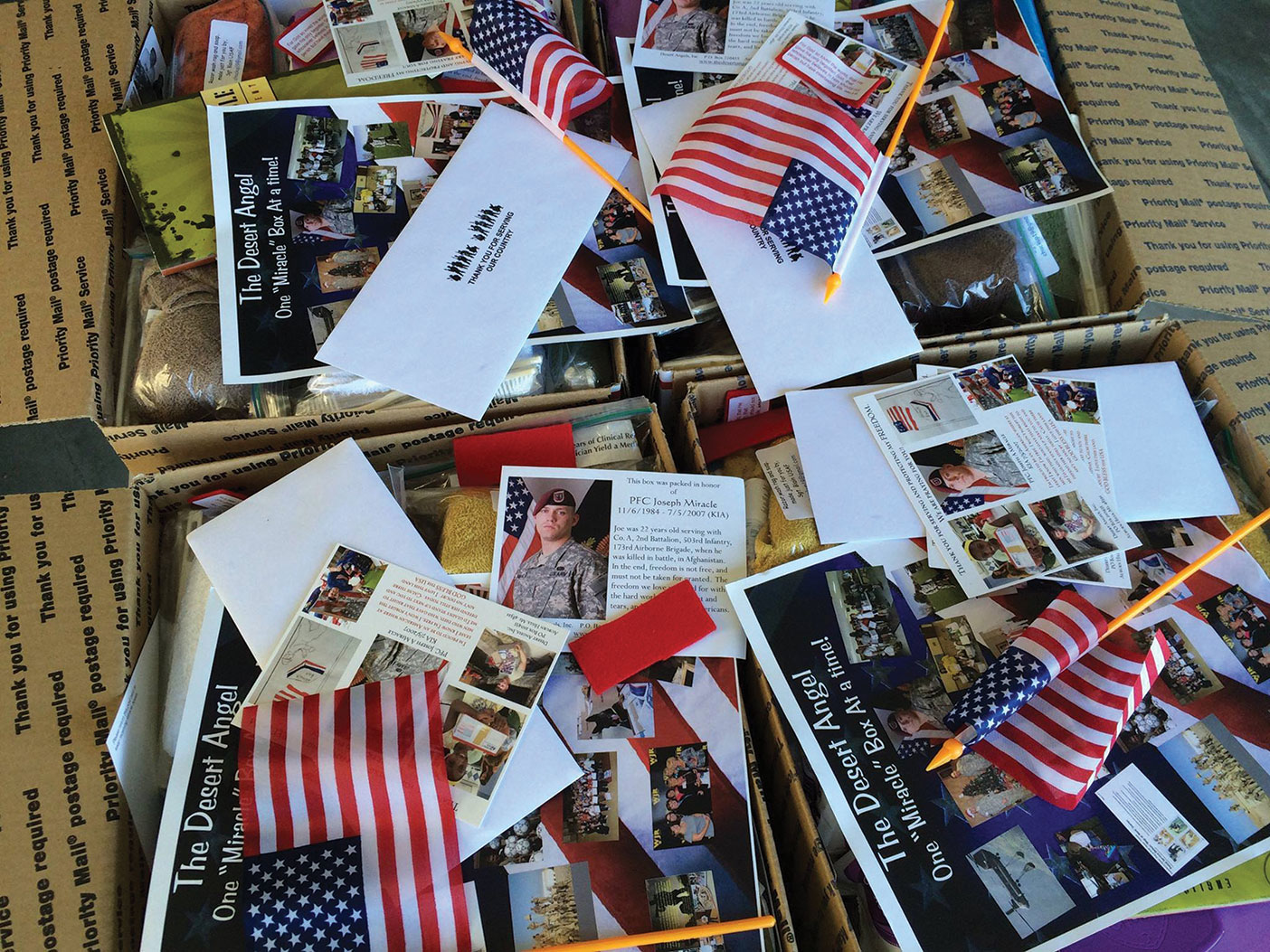 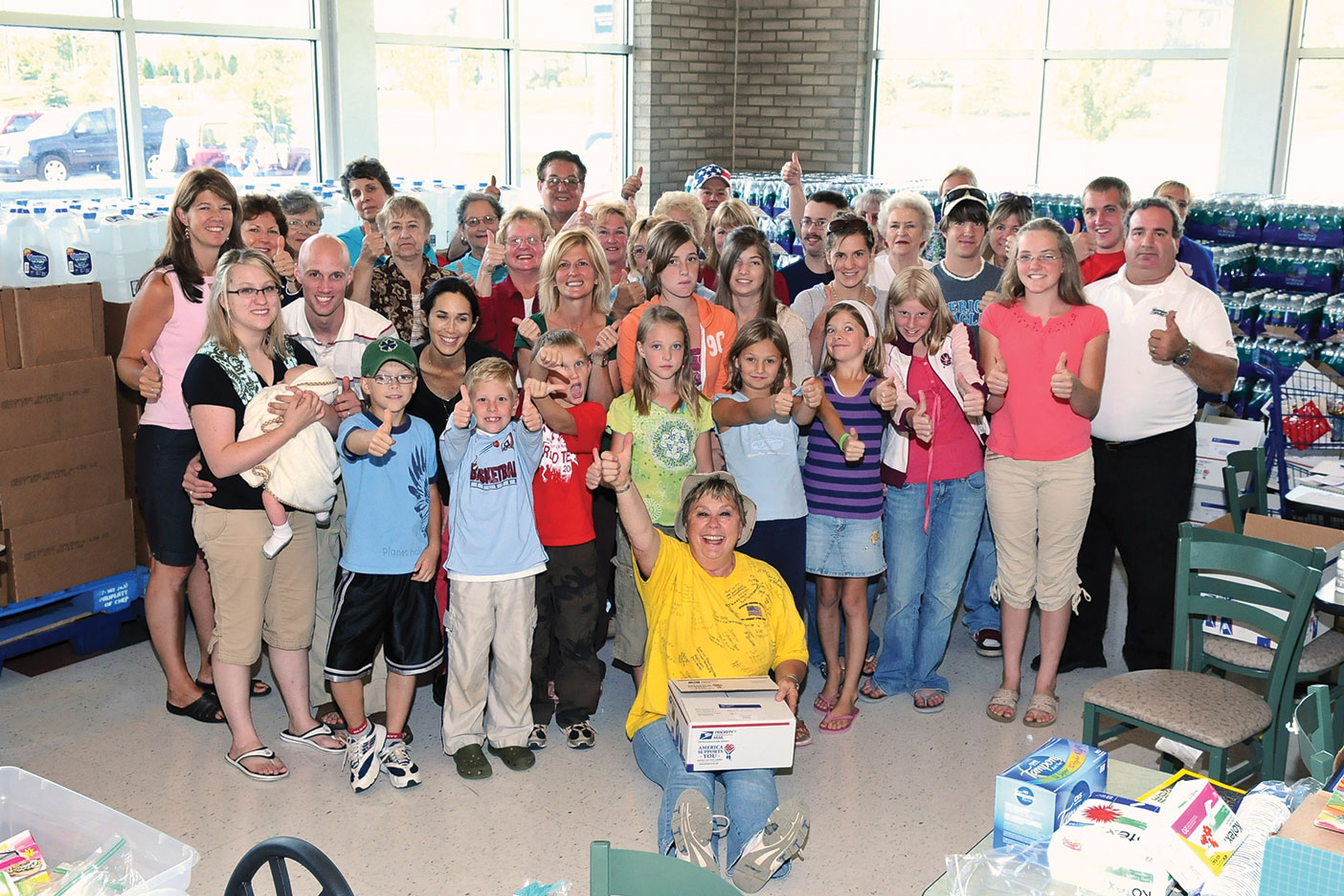 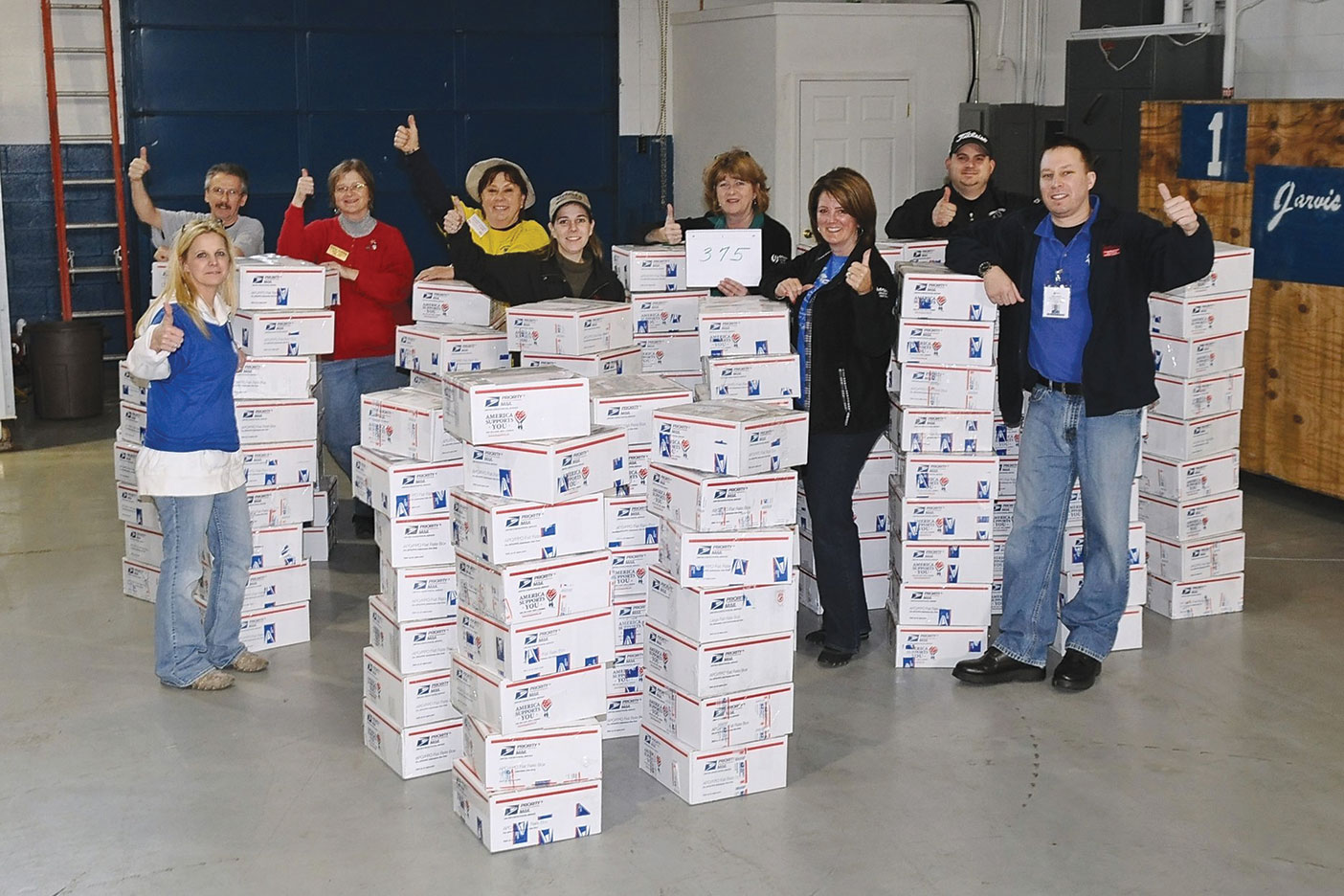 Each box is addressed to someone in the military and must be sent through the U.S. Postal Service. The recipients share the bounty with everyone in their unit and with ally units from different countries.

Donations and names of troops are obtained through word of mouth and social media, Blain said. “We don’t knock on doors – people come to us. Deployed medical units and field hospitals have requested T-shirts, briefs, socks, sheets and personal care items.

“If you have a loved one serving, we want their address,” Blain said. “Email Louise@TheDesertAngel.org and we will send monthly Miracle Boxes to them. This is our mission.”

Throughout the year, volunteers gather for “packing parties.” The Boy Scouts and Girl Scouts, The Zonta Club of Flint and Knights of Columbus are among the Desert Angels’ biggest supporters. The Linden Boy Scouts have been helping for five years, and the Oakland County Sportsman Club for about 15 years. Holly Goodwill store, and Cause & Effect Gallery of Fenton also are supporters. Instead of an annual Christmas party, some of Desert Angels’ private corporate friends host employee packing parties. Miracle Quilts for the Wounded is a part of Desert Angels, and Treats for Troops has collected candy for Christmas stockings that will be mailed to deployed military.

Blain had a chance to enjoy a trip to The White House with Gold Star families during President George W. Bush’s administration. “I got to meet all of his staff and First Lady, Laura Bush. It was an awesome time! We had a Texas-style breakfast on the East Lawn. I gave President Bush a prayer cloth and he gave me a kiss on the cheek. I was honored to be with Gold Star Families – families that had given so much.”

Blain said she doesn’t want to get “wrapped up with numbers,” but over the past 20 years, thousands of Miracle Boxes have been sent. She anticipated that more than 1,000 boxes would be sent this Christmas season.

What do troops want more than anything? Handwritten notes and pictures colored by children are also much appreciated.“ A card or letter from someone to let them know we care,” Blain shared. “Just knowing that someone they don’t know supports them is what they want.”

For more info and to submit names and addresses of troops to receive Miracle Boxes, visit thedesertangel.org or call 248.736.6403.

A Soldier’s Thank You

I remember like it was yesterday the very first box I got from my Angel. I had just spent about six hours in the sweltering hot sun on patrol and was headed back to base to rearm and refuel. I knew that I had about 30 minutes til I had to head out again. I was in a foul mood as the hot sun and heavy gear had made me sweat through all my clothes including my boots and the wind was blowing sand in our faces and sticking to my sweat-soaked uniform. I had a choice to make: race up to the chow hall and hope to grab some hot food before we rolled out again and remain in my sweat and sand-soaked clothing, or grab a change of clothes and go without food for another patrol. I chose to change, so I headed to my room in a huff and rush.

On my way there was a private trying to talk with me. I passed him by without a glance and headed toward my room, but he started to chase me. As he almost caught up, I was stopped dead in my tracks at what he had just yelled down the hall to me. What did he say? I remember asking myself. Did he say mail? Then again, he said “SGT G you have mail, it’s a box for you!” It was as if the whole world’s problems suddenly vanished, and a weight was lifted from my shoulders. I had a surge of energy as I felt almost like a giddy schoolboy. I turned around and asked, “mail for me?” He tossed the box my way (time slows, as the box sails through the air). Mail for me? Who can it be from, what could it be and why? The feeling of hope suddenly creeps back into you, washing away all that bone-deep weariness that comes from long hours that wear away at your resolve, turning it into despair.

I catch the box and yell back “Thanks man!” I open my door, set down my rifle, strip off my armor so it might have a second or two to dry out, but I can’t wait to open the box. So, standing there in my sweaty uniform I look at the little box, slowing things down a bit, savoring every second. I roll the box over looking at it, no indication of what’s inside so I turn it over again to look at the address. Yup, it’s for me.

The return label says Desert Angels. Hmm, nobody I know. “Strange” I say to myself, but on with it. I opened it up like a kid on Christmas. I tear into it. First inside is a letter, this will give me a clue as to who and why. But the kid inside got the better of me. I set the letter aside and dug into the box – granola bars and beef jerky, a couple of stuffed animals and a package of baby wipes.

Whoever this Desert Angel was, she was for one thing properly named. I had chosen to forgo food in order to get out of my sweat and sand-soaked uniform and she had provided a meal that I could eat on the go to sustain me though the next patrol, and baby wipes so I could freshen up instead of just change. It was truly a miracle box. I remember leaving for the next patrol feeling excited and refreshed with a granola bar in my stomach and a pocketful of beef jerky. I had the best of both worlds, food and a fresh change of clothes.

I got many more Miracle Boxes, but that was the very first one and I will always remember it the most. I have always told Louise “Desert Angel” Downs that the words “thank you” will never truly describe what or how I feel for her support but until they come up with my feelings in words, they will have to do.