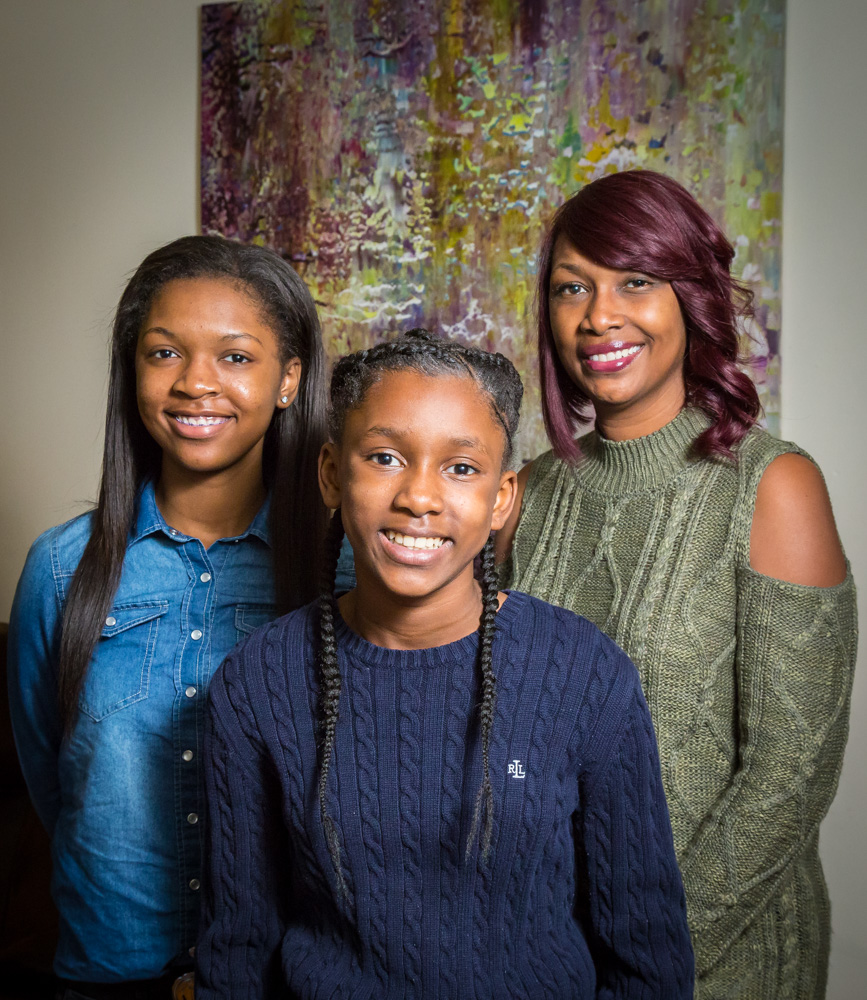 Kenyetta Dotson, founder of WOW Outreach, a Flint-based community action group, believes that everyone can make a contribution – big or small, of time or talent – to improve distressed Flint neighborhoods. “Every contribution is important,” she says. “However you decide to help and reach out to people right where they are is crucial. Maybe it’s as simple as delivering drinking water to homes, or maybe you make a pot of chili, buy or bake cookies, knit blankets or create handmade cards that offer someone encouragement, it’s all important work.”

“Doing nothing will keep us in the same place as we are,” Dotson continues. That’s why she lives to always move forward, move toward something more positive. It has become her life’s mission.

WOW Outreach, which has office space at 6202 Dupont St. and connects to Church Without Walls, exists to create a community with zero tolerance for violence, and to change the culture of Flint neighborhoods toward positive action, conversation and collaboration. Dotson, who had the vision to bring together people, organizations, and resources, hasn’t been in the same place for the past 13 years since she established WOW Outreach, because she relies on moving forward – even after violence touched her personally.

Dotson’s aunt was murdered by her boyfriend and her maid of honor was killed in a violent altercation. “After all of that and all of the other violent acts we’ve all heard about within our city, I’m still willing to get up and come together with other people who have a shared vision to provide alternatives and resources, and are willing to help families living in Flint’s most underserved areas,” she shares.

One such person she collaborates with is Bob Brown, a city of Flint resident and vice chair of WOW Outreach, who describes himself as a “European-American white guy” who became involved eight years ago, after adopting his one-day-old son, Desmond. 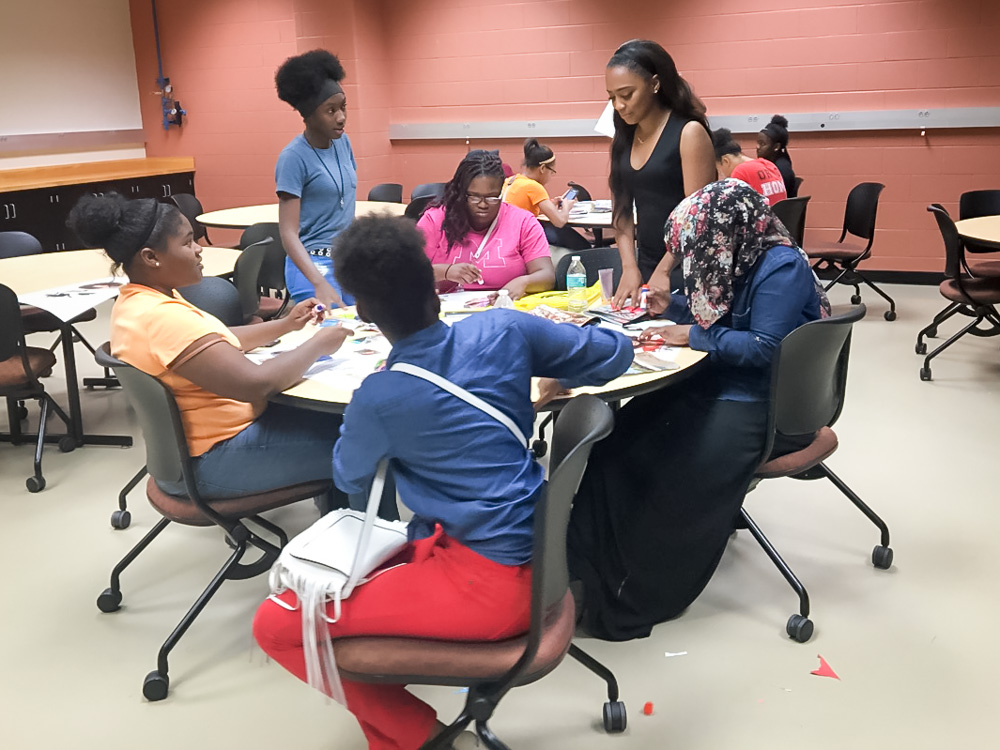 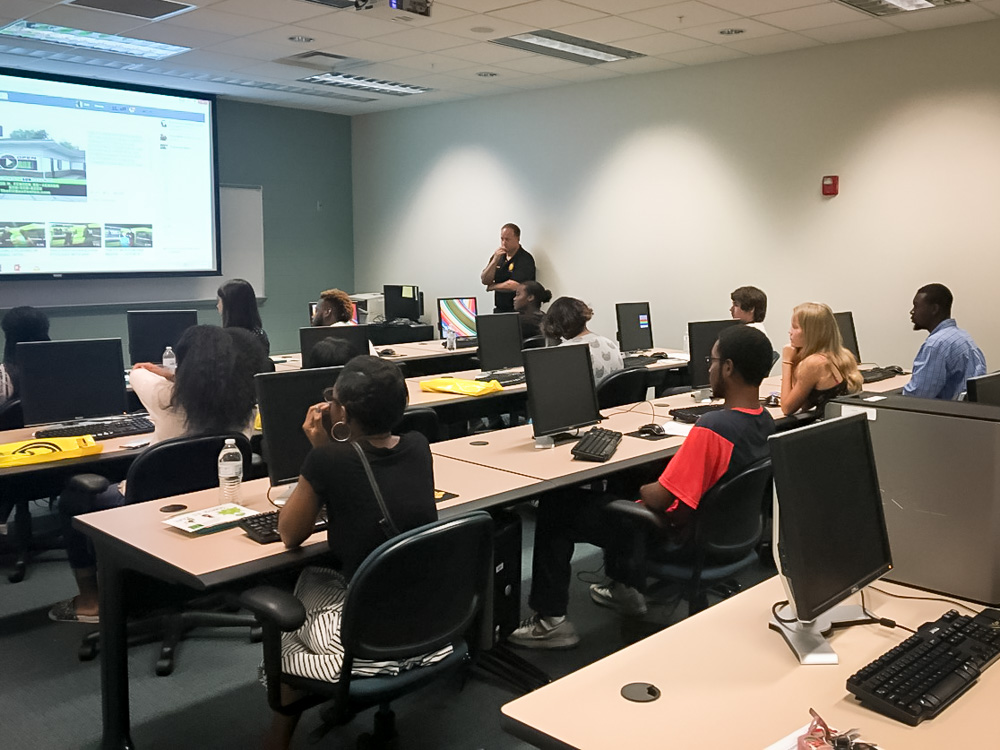 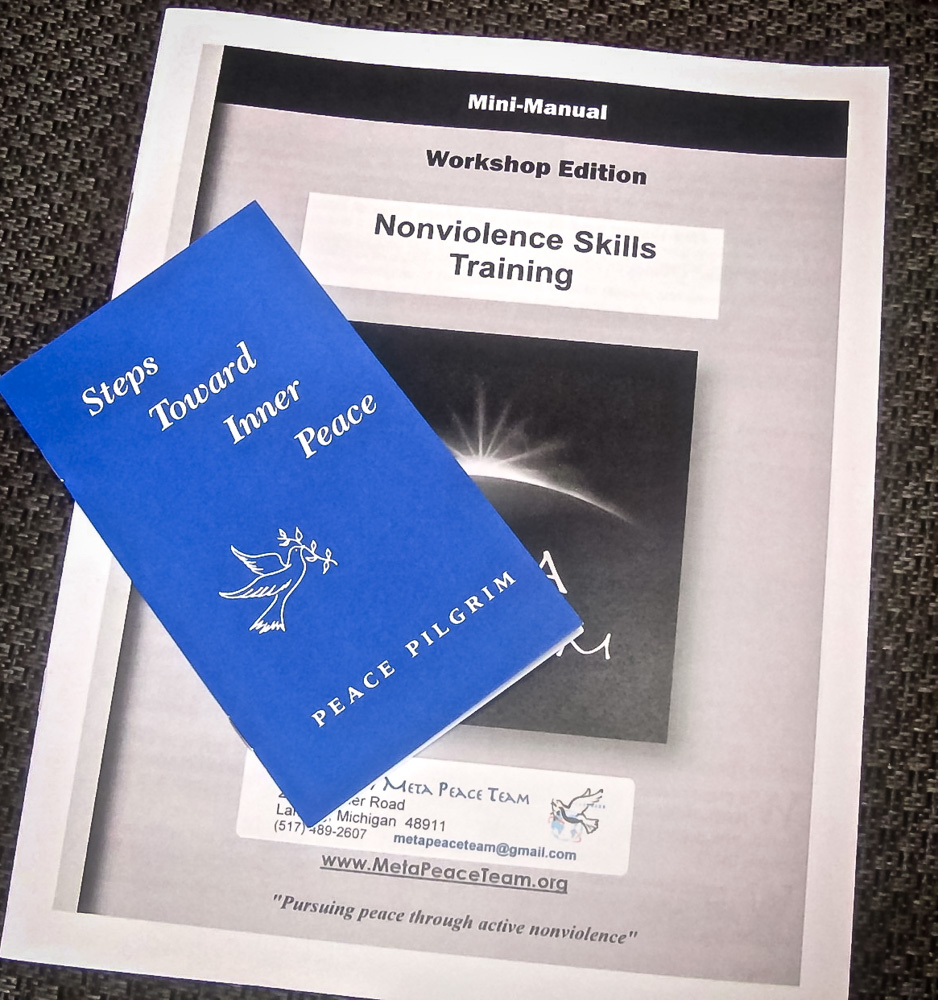 “I gently rocked my beautiful, black baby boy, and I knew that my love would not be enough,” Brown says. “That’s a tough thing for a father to admit. I made up my mind that night to do everything I could to diminish the barriers of racism that would dominate his life.”

Kyona McGhee, interim executive director, is a Cooley Law School student who wants to become a public defender; she joined WOW Outreach to help decrease violence. “WOW Outreach is Flint’s biggest hidden treasure,” McGhee says. “The passion of its members, who live in these neighborhoods and show their desire to help and work together with others, is of collaboration of people and their gifts on a magnitude like I’ve never seen before. WOW volunteers get the job done. They set aside their egos, pride or desire for acknowledgement to get things accomplished.”

“Doing nothing will keep us in the same place as we are.”
Kenyetta Dotson, Founder

Dotson, Brown, McGhee and other WOW volunteers meet in vacant, blighted neighborhood lots on random Saturdays to start cleaning. They also grill hotdogs, which draws the attention of neighbors. “Being visible in neighborhoods is the first step to building relationships,” says Brown. “When you invite people to come out, be a part of the solution, you’re helping them to step up and become leaders in their own neighborhoods, in their own way. It’s a way to let them know they’re not alone.”

These mini-neighborhood initiatives take form in expos or neighborhood marches, as Brown calls them, and typically include food, music, bounce-houses, prayer opportunities, resource bags, mobile health trucks, and the Food Bank. Additional volunteers from local agencies are on-hand to guide people to the right resources.

At first, most people think they have nothing to offer; in reality, however, they do. “It’s about unlocking it and discovering it,” Brown explains. “Everyone has strengths, abilities, skills and some way to contribute which can all be a part of the solution.” For example, someone who has extra time might volunteer to sit on their front porch and serve as a neighborhood monitor. Another person might have a rake, someone else has bags and before you know it, an empty lot can be cleaned up and eliminate a hiding place for someone with ill intentions. 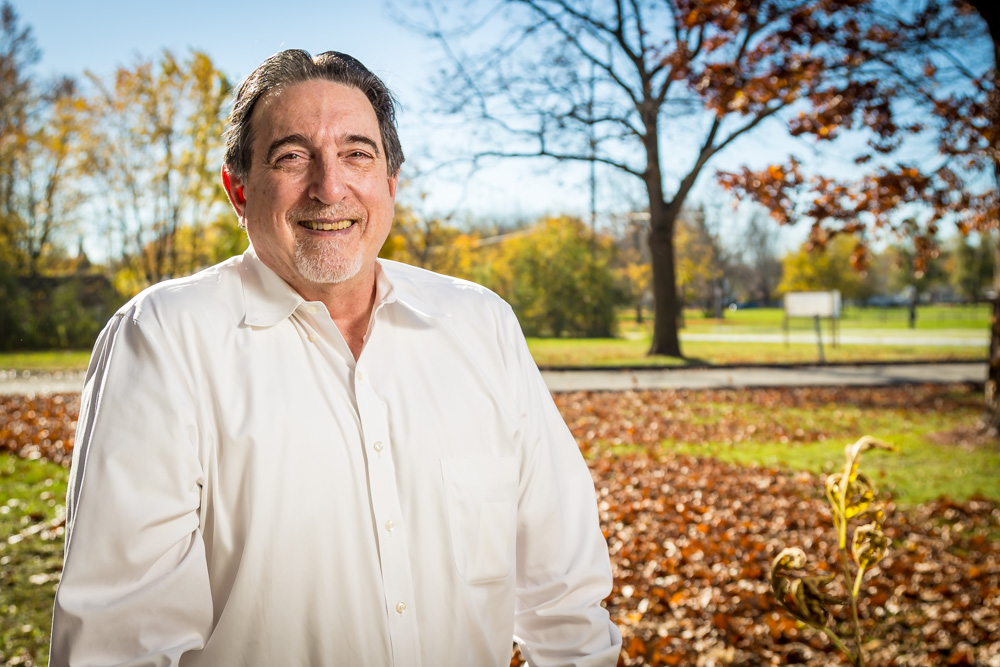 “Everyone has strengths, abilities, skills and some way to
contribute which can all be a part of the solution.”
Bob Brown, Vice-Chair

WOW Outreach networks and partners with other groups, churches and organizations to make small differences in any given neighborhood. For example, the Kennedy Center on Pierson Road once opened their gym to kids in the neighborhood, but the church members from Mt. Carmel Baptist Church who ran the event needed assistance with outreach, recruiting volunteers and strengthening the program;  WOW Outreach stepped in and collaborated with more groups like the YMCA, local schools, and additional church leaders. “Together, we created a safe place for youth and families to hang out and play basketball,” says Brown. “In addition to the gym time, we established classrooms with tutors and a light meal for kids to eat after school.”

WOW Outreach, along with local agencies, colleges and universities, hosts an Annual Teen Summit in the fall. It is developed by the youth and formatted with guest speakers, break-out sessions and topics the youth find relevant, such as safety, health issues, recording music, and poetry.

Dotson’s insight about how change can happen is fueled by her passion to serve, motivate and inspire others to achieve their level of greatness. “Most people in these neighborhoods never even thought they could get a college education,” she says. “They don’t think they can get a decent job outside of their own neighborhood grocery store that pays minimum wage. They think they can never do more than that.”

WOW Outreach and partners tirelessly work to improve the positive outcomes within local communities during safety, mentoring projects, nutritious food and water distribution and other community efforts; they witness the residents who are recipients of these services becoming the servers of the community. 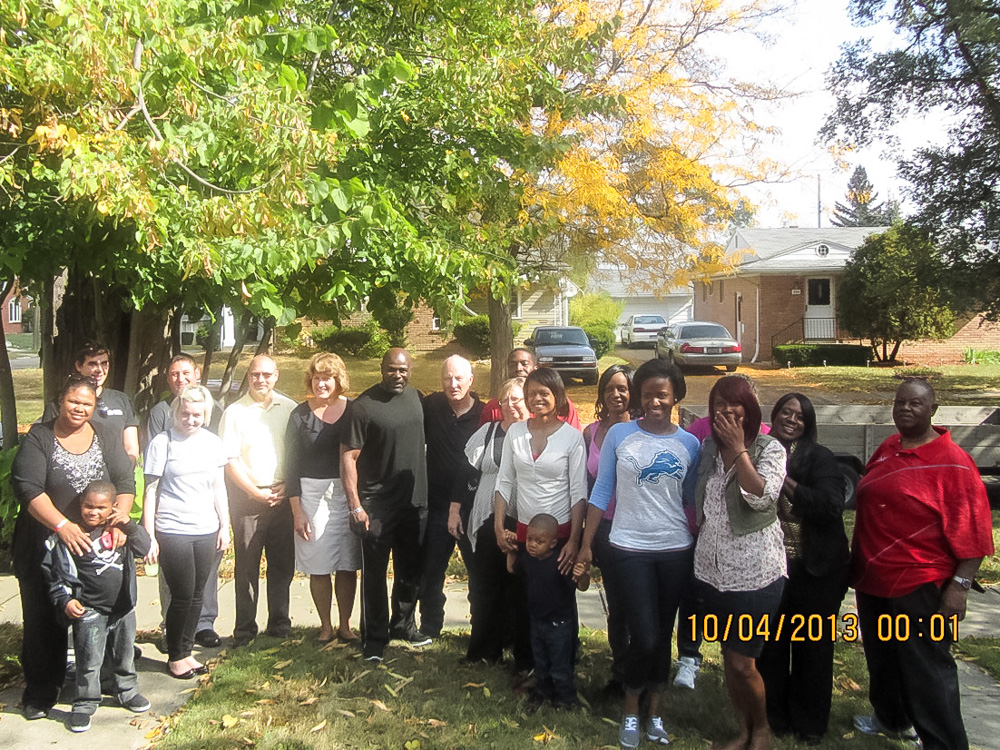 Although WOW Outreach meets monthly on a formal basis, its members, volunteers, and partners are working around the clock, every day, to make improvements, to empower people in Flint neighborhoods, and to give hope. “Going to meetings is not the answer, taking action is,” says Dotson. “Nobody wants to sit in meetings and do a bunch of talking. We’re a group that takes action.”

Dotson emphasizes what WOW Outreach is wherever she goes. “WOW is willing to use its many assets, be transparent, work together with others in a cohesive manner to help youth and families as we work to address violence in the most distressed neighborhoods,” she says. “We are simply asking our community partners to do the same, come to the table and link and align our assets.”

Dotson, Brown, McGhee and everyone at WOW Outreach is hopeful. “We’re slowly changing habits, lifestyles and breaking the cycle of the culture of violence little by little,” says Dotson. “We’re empowering individuals and that’s what is important.”

To learn more about WOW Outreach or volunteer, call 810.789.7700 or visit WOWOutreach.org.

Photography by Eric Dutro and provided by WOW Outreach