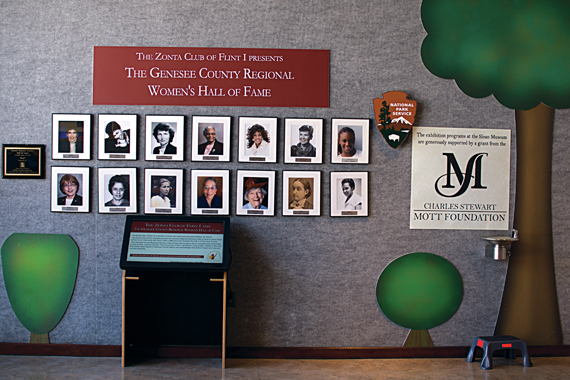 Even the most rudimentary study of the past reveals a gender imbalance. History teaches us that it is men who commit both glorious deeds and heinous acts, become famous or infamous, while women… watch. The women of the Zonta Club of Flint 1 feel differently, and five years ago they created the Genesee County Regional Women’s Hall of Fame to begin recognizing area women who have played a role in changing the history of Genesee County. Zonta International is a service organization that works to advance the status of women on a global scale, and in that spirit, the Zonta Club of Flint felt compelled to bestow local women with the accolades they deserve by honoring them at an annual Hall of Fame induction awards dinner.

Zontian Stacy Betts says the idea was inspired by the Michigan Hall of Fame for Women, which recognizes women around the state. “We wanted to bring attention to Genesee County women and recognize their accomplishments,” added Stacy, who is assisting Chairman Sandi Bombe. “We strive to bring greater visibility to the roles women have played in Genesee County history and acknowledge that women impact and improve our lives every day.”

The 2014 inductees will be honored at the awards dinner on April 23 at the Flint Institute of Arts. Proceeds from the event help fund Zonta Club of Flint 1’s many service projects, including the Zonta House at Whaley Children’s Center. This year’s inductees are truly deserving of the honor, says Stacy, as all of them have an impressive list of accomplishments. The contemporary inductees are artist Peggy Reimel Abrams, Dr. Edna Raye Bick, DO; Ruby Jean Butler, Judge Judith A Fullerton, and Donna Dodds Hamm, and Doris Sain. One historical inductee will also be honored: Honorable Elza H. Papp. Robert (Bobbi) Wray, Michigan’s first female TV news reporter/photographer and a former Zontian, will accept the award on behalf of Elza Papp.

Hall of Fame nominations are made by individuals and representatives of organizations, and final selections are determined by a vote of the Selection Committee, which is comprised of members of the Zonta Club of Flint 1 as well as community members. Admission criteria include the candidate’s prominence within Genesee County and accomplishments in her chosen field of endeavor, as well as whether her contribution to the community significantly advances the status of women in society. Also considered are qualities of character and personal ideals that would serve as a positive influence on Genesee County youth.

The Zonta Club of Flint 1 is proud to host this event to honor women. “It’s a great event!” exclaimed Sandi. Stacy added, “The 2014 nominees have given so much to the community, and we are honored to have an opportunity to recognize their contributions.”