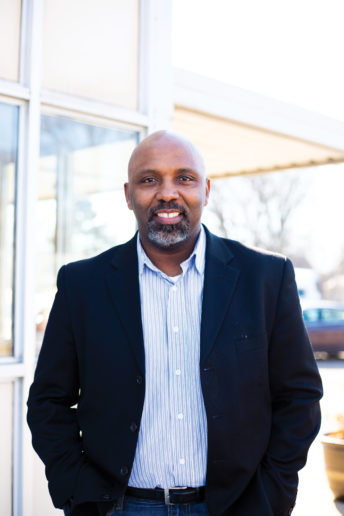 As a 15-year old growing up in Beecher in the 1980s, Derrick Watkins started living a life he didn’t really want. A lifestyle of alcohol and drug abuse, running the streets past his curfew, disobeying his parents, dabbling in gangs – like that of his older brother, whom he looked up to – was calling him.

“I was definitely living on the edge,” says Watkins, now the pastor at Jachin Baptist Church in Flint, a master electrician, project engineer and estimator at Goyette Electrical, who established ABC Youth (short for Active Boys in Christ) in 2017.

Humbly, he’s okay with the past adversities that stand in the shadow of the free summer program he established. Entering its third year, it aims to help youth ages 7-17 who might not excel academically, but are seeking experience to work with their hands and change their lives (knowingly or unknowingly).

Pastor Watkins concedes encouragement and opportunity can go a long way, but what he didn’t have in his own youth, he strives to offer others. The irony of this is not lost on him; this is exactly what he wished for when he was young.

“All I want to do, really, is to give them a fighting chance,” he says.

That’s what the four-week ABC program is doing. Funded in its first year by members at Jachin Baptist and in the second by a Ruth Mott Foundation grant along with funds from Jachin Baptist Church and donations from Goyette, the program offers participants a chance to learn vocational skills from licensed professionals in trades such as carpentry, painting, electrical, plumbing, cooking, small engine repair and computers. The additional funding allowed the program to expand to include girls, transportation for those in need, equipment and tools.

Closer to Pastor Watkins’ heart are the sessions when he imparts life-lasting virtues such as integrity, honesty, respect and forgiveness. “We teach a trade and a theme,” he says, “because often, the children don’t get exposed to these types of life applications. They seem to be a lost art.” 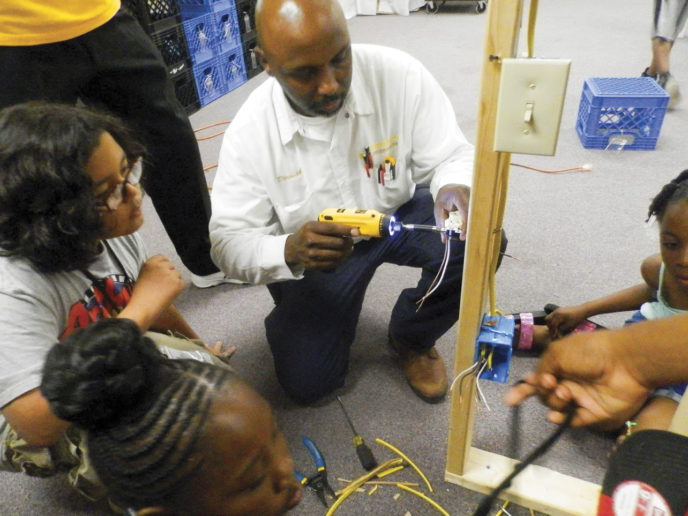 The first year, the program drew about 20 boys. The second year, thanks to word-of-mouth and Facebook, 64 young people participated. Nolan Darrough, 14, didn’t think he’d be interested in the summer program, but changed his mind after participating in the activities and meeting people like Pastor Watkins. “The plumbing and carpentry courses really caught my eye,” says the Swartz Creek Middle School eighth-grader. “Now, I can help my mom around the house and fix things like a broken kitchen drawer or the floor tiles.” Darrough expresses gratitude for the positive benefits of the program and the man behind it. “Pastor Watkins is a really good person,” he says, “he’s helped me learn new skills and it makes me think about my future, getting a job.” His mother, Nina, a single parent, tries to reach out to male role models for her son, but says it’s not easy. “Mentors like Pastor Watkins have stepped up to offer this program which has helped my son. More than anything, I like the life lessons and character-building advice he provides. It’s not easy raising a teenage son these days, but this has opened up dialogue between us. Nolan came home and told me, ‘Mom I faced peer pressure today, but I remember what Pastor Watkins told me. He said I’ve got to be a leader, not a follower. You don’t always have to follow the crowd.’ This course has sparked initiative in Nolan, gives him more confidence to face temptations and I’m glad to see these positive changes that Pastor Watkins has helped to instill.”

Misfortune from Pastor Watkins’ past is at the heart of the foundation for ABC ministry. Helping young people such as Nolan is his passion.

“I didn’t like school. I didn’t want to go to college,” he says. Watkins kept his secret desires about his ambition hidden in the darkest parts of his heart. “I knew I wanted some kind of job using my hands,” he recalls. “But teachers and counselors seemed to only focus on where I wanted to go to college.”

Nobody nurtured his dream to work with his hands. One day, though, he found the courage to reveal his natural ability to his mother. “I told her I wanted to build a bedroom in the basement,” he says. “She said she’d buy the materials and see what happened.” He scurried to the local self-serve lumber and got everything he needed. He completed the addition to the basement and his mother was amazed at his talent.

“It was just something inside of me,” says Watkins, knowing in his soul what he wanted to do but not having the resources, opportunities or guidance to point him in the right direction. However, with a dream in his head, he carried on with the negative, going-nowhere lifestyle, started skipping school and eventually, dropped out. 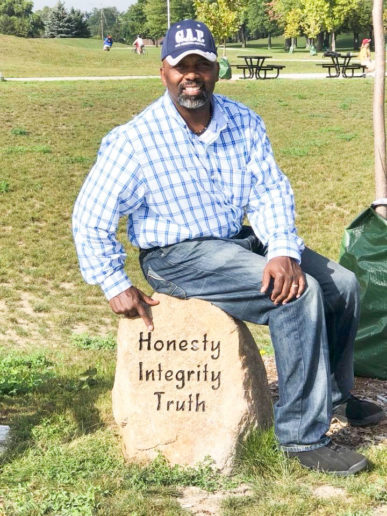 But then, a woman – crying – spoke to his heart. He remembers coming home late one night to his father sitting at the kitchen table, waiting for him. “He asked what was going on with me and said, ‘Son, you’re really disappointing us.’ As he talked to me, I could hear my mother in another room, crying. It tugged on my heartstrings to think I was hurting her so much. I’d never heard her cry before and it was because of me. I knew I had to change my ways.”

It was his mother who gave him an ultimatum. “You either go to school or you get a job.”

“Nobody ever verified it,” he said. “I worked at the Farmers’ Market, Grand Blanc Country Club, Arby’s, and then landed what was actually a good job at VEMCO (later renamed Venture), an assembly parts plant, in Flint.

He admits it was good to have a job, the pay was good, but it wasn’t what he wanted to do and he had no passion for it. Unintentionally, or maybe subconsciously, he began accumulating many absences at work. “I pushed things to the limit,” he says. “During this time, I gave my life to Christ and he delivered me from my alcohol and drug addictions,” says Watkins. “My walk in faith strengthened and I was saved. I stopped drinking, studied the Bible and I was growing in my faith life.”

He was fired from the job – but also getting closer to his vision. A job at Sonitrol offered him a little more hope. “I was moving closer to my dream of being an electrician” he laughs. “I was actually working with wires. And I was working on job sites with real, licensed electricians.”

For the first time, there was a spark in Watkins. He was interested and motivated on his job assignments. He befriended colleagues working in the industry and asked lots of questions. One electrician, Brent, offered one sentence that would change the course of Watkins’ life: “You should go apply for the electrician’s apprenticeship at the Local 948.”

He applied and was invited to an interview; however, a request to bring a high school diploma or GED would keep him from showing up. “I didn’t have either, so I figured I’d lost my only chance to become an electrician,” he says. “I told my wife, Christine, my dream was destroyed by my own hand.” 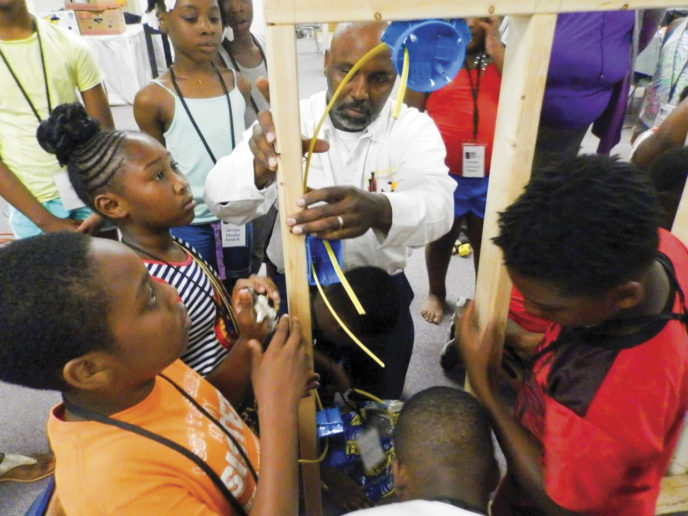 The loss propelled him to attend Mott Adult College and earn his GED, and his scores were high enough to qualify for college courses. About a year later, the Local 948 re-invited him to an interview. “This time,” he says, “I had the proper documents and was accepted into the apprenticeship program.” His dream of becoming an electrician became reality.

Still floundering in finding his purpose, he knew God was drawing him closer.

As he worked on his professional life, he also continued his studies in faith and became a minister, and then, an ordained pastor. He was asked to preach at a Flint church when the pastor randomly told him, “Minister Watkins, the Lord is going to do something very good for you – suddenly, too. Something is about to happen to you.”

God entrusted Pastor Watkins with a very special gift. A year after the prediction from the neighboring church leader, he was handed the keys to his very own church. “It’s really unbelievable,” he shares. “When I tell my story, I always say the way I am now isn’t how I always was. I didn’t have a smooth ride in life and I took a lot of detours to get here.”

Naming his new church Jachin Baptist Church brought back a memory he didn’t understand at the time. “The Lord put the name on my heart a long time ago. When I was first saved and started studying the Bible, the Lord showed me the name Jachin – it’s from 1 Kings 7:21 in Scripture – it means ‘The Lord will establish.’” 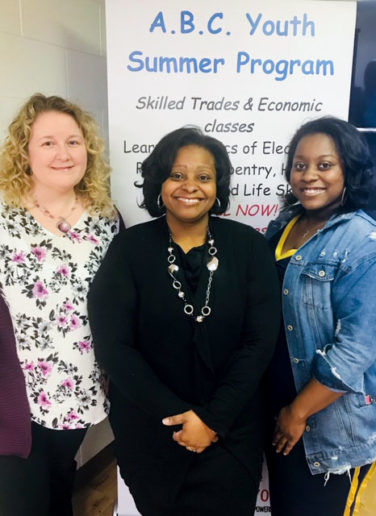 It seems as though God was and still is establishing the man, as well as his purpose – finally, after decades of searching. Watkins credits the volunteers who helped the ABC Youth program blossom. Neighboring churches, colleagues from Goyette, and parishioners helped gut and renovate the interior of the church pouring blood, sweat and tears into the 15,000-square foot worship and learning space. New paint, carpet, seven furnaces, a new sound system, a renovated nursery, offices, a young adult room, Bible study area, children’s Sunday school classrooms, offices, a kitchen, fellowship area and a library were all touched by caring hands.

Recently, Pastor Watkins received a call from a man offering to donate a house he owned, adjacent to the church building. “We received the keys and papers to the house. All of this is the Lord’s doing,” he says. The house is being refurbished and will be called the Boaz Urban Center – a place for the community to study, do research on computers, receive job training – and something near and dear to the heart of the man who had a vision about all of this so long ago. “We’ll offer GED classes to those in need of completing their education, for whatever reason.”

This – all of this – the detours, mishaps and journeying through suffering and misfortune is what drives Watkins today. The man and his vision, purpose and service to God’s people came full circle when, a few days before his mother passed away, she saw her son near her bedside, pointed at him and spoke clearly, “That’s my precious son right there.”