Willie Mack III was eight holes into his PGA Tour debut January 28 when The Golf Channel’s cameras found him.

The timing was perfect.

Having shot even par through seven holes of the Farmers Insurance Open on the famed Torrey Pines South Course just north of San Diego, CA the Flint native saw an ideal opportunity to dip under par on the eighth hole, a slightly uphill, 180-yard par 3. 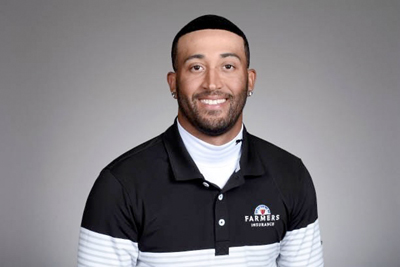 Mack, who was added to the tournament on a sponsor’s exemption after another player tested positive for coronavirus, would have to reach the cup in just two shots.

He almost did it in one.

“That was saucy,” said a Golf Channel announcer describing the shot. “A beautiful iron shot by the young man.”

Mack then converted an easy putt to leave him at one under par.

“And he converts – Willie Mack!” the announcer exclaimed before coverage shifted to other golfers.

Mack, who has honed his skills on professional mini-tours since 2012, remained at one under through 14 holes before bogeys on three of the final holes left him with a two over par score of 74.

After sporting a white hat and white polo shirt during a sunny round one, Mack wore long-sleeved layers and a stocking hat for round two as the weather changed dramatically, greeting golfers with wind, rain and even a hailstorm.

Mack struggled with driving accuracy and finished with a 75, missing the cut to play in the final two rounds of the tournament by four strokes.

“I was excited to finally play in my first PGA Tour event – that’s what I have worked so hard for and went through so much for during the past seven years – but I had less than 36 hours notice,” he says. “I felt I played well at times, but I found out after the second round that my driver was cracked, which explained why I was hitting the ball so far to the right.”

Still, he took plenty of positives from an unexpected opportunity to test himself on golf’s biggest stage.

Mack and the player he replaced, Kamiau Johnson, both signed sponsorship deals with Farmers Insurance last year, making Mack a logical choice to take Johnson’s spot. He played a practice round with Rickie Fowler and Gary Woodland, the 2019 U.S. Open champion, who have both been ranked among the world’s top 12 golfers. When the tournament began, Mack was in a group that included Mount Pleasant native Ryan Brehm, an old friend. 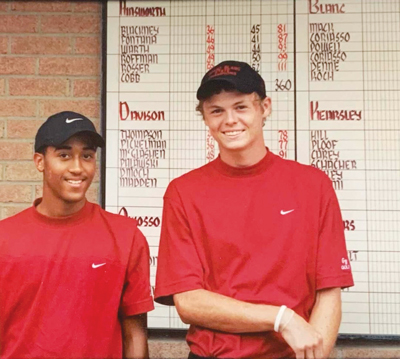 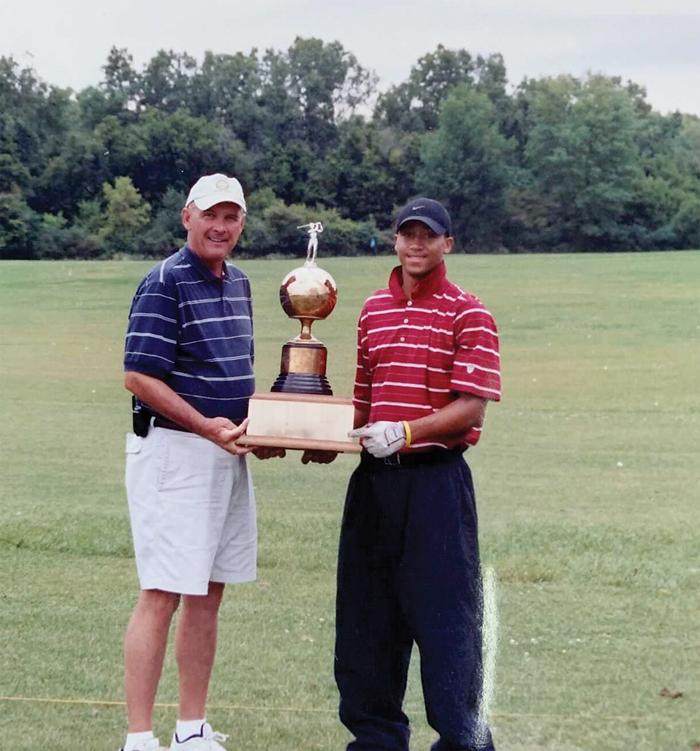 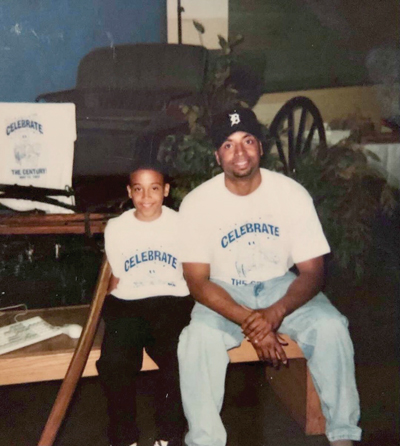 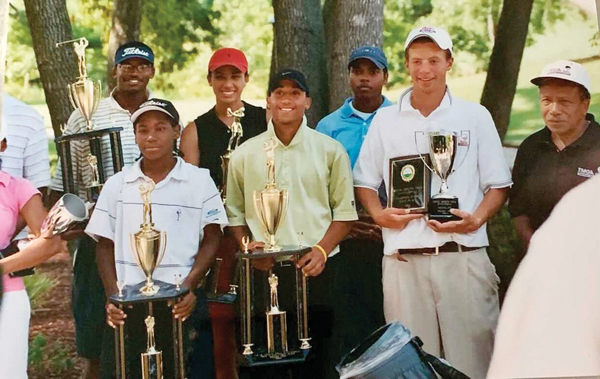 “You can’t beat the experience and I feel I got everything I could out of it,” he says. “Being paired with Ryan was a cool bonus because I was able to catch up with somebody I’ve known since we played in high school. That helps me be better prepared for Riviera.”

While not making the cut at Torrey was disappointing for an intense competitor like Mack, it meant his weekend was free and Riviera was less than two hours away.

Mack played 27 holes there Sunday (January 31). In a group behind him was actor Adam Sandler, star of the endearing golf comedy, “Happy Gilmore.” 

“We actually talked a little between the eighth and ninth holes. Nice guy,” Mack said prior to the Genesis Invitational. “I like Riviera better because it has an ‘Up North in Michigan’ feel and is more tree-lined than Torrey. I’ve had more time to prepare and expect to do better at Genesis.”

Mack, who now lives in Orlando, followed his PGA Tour appearance by placing fourth at a Florida Pro Golf Tour event. He is the tour’s leading money winner ($11,252) this season.

Todd Anderson, Director of Golf Instruction at TPC Sawgrass in Jacksonville, FL also expected Mack to fare better at Genesis. Anderson, who has worked with Mack since last fall, has been recognized as one of American’s top ten instructors by Golf Digest and his clients have included many PGA Tour players.

“Willie played well at Torrey, considering he did not have much time to practice on the course, but missed some shots at the end of the first day because he was not used to the greens,” Anderson says. “His cracked driver was a tough break because the ball is just not going to react as well, but Willie played well after Torrey and we’ve worked some on things. He just needs to go out and play his game, not worry about anything else.”

Mack gained entry into Genesis as recipient of the Charlie Sifford Memorial Exemption, named for the PGA Tour’s first African-American player and representing the advancement of diversity in golf. Tiger Woods, Mack’s idol, is tournament host and his Tiger Woods Foundation selects the Sifford recipient. Mack was elated, to put it mildly, when the call came in late December.

“First, somebody from the Tiger Woods Foundation called to say I was nominated and then about a week later, they called back to let me know I’d be playing in the Genesis tournament,” Mack recalls. “For Tiger Woods to play a part in me getting into a PGA event was a dream come true and hopefully I can meet him and thank him. I immediately called my dad and he burst out crying.”

There is a good reason Willie Mack, Jr. became emotionally overwhelmed. Father and son had both decided to try golf after watching Woods burst onto the PGA Tour in the mid-1990s, something Woods himself acknowledged in a release.

“Willie learned to golf with his dad just like I did and those are memories that will last forever,” Woods stated. “I am excited to see Willie make another lasting memory when he tees it up at Riviera. I know Charlie (Sifford) would be proud of how he has stayed focused on achieving his dream.”

While he was growing up, Mack and his father played mostly at Pierce Park and Swartz Creek Municipal.

“It was great bonding time, both falling in love with golf at the same time,” Mack recalls. “Dad became pretty good. It wasn’t until I was about 11 or 12 that I finally had the strength and skills to beat him.”

Mack’s golf maturation continued and he qualified for the Division 1 state tournament as a Flint Central sophomore. Then, Central dropped its program, but Mack found a new place to flourish at Grand Blanc. He placed second in the state as a junior behind teammate Billy McKay as the Bobcats captured the Division 1 state title. Mack finished fourth as a senior and was named to the All-State Super Team for the second time. It consists of the state’s top ten golfers from all four divisions.

“I first saw Willie when he was in eighth grade and could tell how he loves golf and loves working hard at it,” says Rick Kent, Mack’s coach at Grand Blanc. “His enjoyment in practice is why he did so well in high school, college and pro mini-tour events. It’s great he is getting to see how his game compares to the best players in the world.”

Seeking a place to play the game year-round, Mack accepted a golf scholarship to Bethune-Cookman University in Daytona Beach, FL and won 11 tournaments. He turned pro after becoming the first African-American winner of the Michigan Amateur in 2011.

Mack had immediate success and was named Florida Pro Golf Tour’s Player of the Year in 2012. He earned enough money to make a run at PGA Tour Q-School in the last year – it was a way to directly qualify for the PGA Tour, but he fell short of qualifying.

Now, players must go through Q-School to qualify for the Korn Ferry Tour, one notch below the PGA Tour, something Mack also tried several times. The top 25 players in the Korn Ferry standings then make the PGA Tour the following year.

In addition to the Florida Pro Tour, Mack also competes in Advocates Professional Golf Association events and won both tours’ Player of the Year awards in 2019. He has won nearly 20 professional tournaments.

Attempting to earn a living on mini-tours while working toward a big break has been difficult, at times. Mack even lived out of his car and crashed on couches for 18 months in 2013-14, splurging on hotel rooms if he won enough money.

He practiced at Orange County National Golf Course outside Orlando where he could also shower. Mack’s father, by no means a man of means, helped him when he could. He – and his clubs – also survived his car catching fire on a Florida freeway in 2018.

“Chasing my dream has been a grind, but I never thought about giving up,” Mack says. “I feel that I can’t let down the people supporting me. You have to keep working at it and always be ready when your break comes. Life has gotten better the past couple of years with the Farmers Insurance sponsorship being huge for expenses.”

Mack will continue pursuing the PGA Tour through Q-School and Monday qualifying events in which the top two finishers play in that week’s PGA Tour tournament.

“The first time I worked with Willie I was like, ‘what has been holding you back from the PGA Tour?’ because he is extremely talented,” Todd Anderson says. “There is not a lot of weakness in his game. We’re working to make his good days better and his bad days not as bad so he becomes more consistent. There is no question Willie can reach the next level.”

“Chasing my dream has been a grind, but I never thought about giving up. You have to keep working at it and always be ready when your break comes.”