Willa Hawkins has been a warrior her whole life. She is the last living member of a 12-citizen committee that helped pass the Flint Fair Housing Ordinance. In February 1968, Flint became the first city in the nation to pass by popular vote an open housing referendum. It passed by a narrow margin, making national news and civil rights history. Willa, now 79, was one of the driving forces behind the desegregation of housing in Flint.

Although she was born in Arkansas, Willa moved with her family to Flint as a child. She graduated from Northern High School and obtained degrees from Michigan State University and Eastern Michigan University. She married Elmer Hawkins, who worked for General Motors, and they raised two children, a son and a daughter, while she worked for the Flint schools as an educator and as the principal of Bunche Elementary School for 17 years, retiring in 1990. Willa had always been a staunch supporter of the Civil Rights Movement, but a fire was lit in her in 1963 when she traveled by bus to the National Mall in Washington, D.C. to participate in the March on Washington. There, she heard Martin Luther King Jr. give his famous I Have a Dream speech. “It fueled me to become a warrior of sorts,” she said. “I worked my way through a sea of people right to the front of the crowd.” 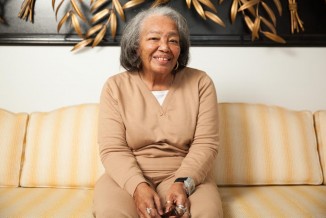 My City Magazine visited Willa at her Flint home on January 15 – her birthday and that of Martin Luther King, Jr. She said just listening to King’s speech made her become more aware of the issues faced by blacks, and she began to look at things she’d never looked at before. When she returned to Flint she became involved in a tight-knit group of people who were fighting for equality, especially in the area of desegregation. Their goal was to open up more housing options for blacks in Flint. “Blacks lived on the east side of Saginaw Street and there were no blacks on the west side,” she remembers.

“Flint is where I grew up and I’m proud of it. Anyone who grew up here should be proud because they can make it anywhere in the world.”
Willa Hawkins

Willa continued her crusade. Her interest in politics led to her involvement in various campaigns, including serving for 12 years as campaign manager for County Commissioner Sylvester Broome. She was a county commissioner herself for many years, and served on numerous Genesee County boards, including Community Mental Health, Community Action Agency, and the Parks & Recreation Commission. She has also served with the Valley Area Agency on Aging, New Paths, Food Bank of Eastern Michigan, and Transition House Board of Directors. In 1997, Willa was honored at a luncheon in Washington D.C. by Congressman Dale Kildee for her distinguished service to the citizens of Flint in her roles as educator, administrator, activist and community leader.

Today, Willa enjoys life at a slower pace. While she is fiercely proud of what has been accomplished, she says there is much more to be done. “We have to grow some young warriors,” she laughed. “You just can’t wish problems away; you have to do something about it. I wish MLK would have lived longer; maybe he could have solidified the path to keep things moving along.” ♦

The Flint Fair Housing Ordinance was a monumental moment for both the national Civil Rights Movement and for the City of Flint. Two Flint attorneys, A. Glenn Epps and C. Frederick Robinson, are credited with crafting the ordinance, and many people in the community, black and white, campaigned to get it passed. Instrumental people included Mayor Floyd McCree, who vowed to resign if it didn’t pass; Nate Turner, Jay Spencer and Bea Williams, as well as pastors of local churches. More attention was brought to the issue in August 1967, when residents waged a ten-day “sleep-in” in front of City Hall, which drew thousands of people. Then-Governor George W. Romney even showed up to show his support. “To have that kind of unity in the black community was something to see,” says Willa Hawkins. “We all came together.” Willa herself could be seen at the sleep-in holding a sign that read, What color is your money? The ordinance passed by a 43-vote margin – so close that the first count mistakenly concluded a defeat. ♦