What is the definition of domestic violence? It is defined by the Department of Justice as a pattern of abusive behavior in any relationship that is used by one partner to gain or maintain power and control over another intimate partner. Domestic violence can be physical, sexual, emotional, economic, or psychological actions – or threats of actions that influence another person.

A recent news story reported that an Oakland County man was in custody, accused of beating his wife to death at home in front of the couple’s two young children. Sheriff department deputies were called to perform a Welfare check and when they arrived, they received no answer at the door but saw a child inside the home. Deputies found what appeared to be blood splattered on the door and then forced entry into the home. Once inside, they discovered a deceased woman lying on the floor of the garage. She was identified as the man’s 30-year-old wife. The family dog was also found dead, a victim of severe blunt trauma. Deputies recovered two baseball bats as possible murder weapons. The husband had been previously convicted of domestic violence in 2014.

According to Ann Kita, Service Coordinator and Crisis Counselor with the YWCA Greater Flint, it isn’t unusual for women who are victims of domestic violence to remain in the home with their abuser. The term used to explain this is “separation violence,” which is a difficult concept for society to understand. “Why doesn’t she just leave?” people ask. The post-separation period has been reported to be the most deadly time for women and children. Many people believe that domestic violence victims will be safe if they can just leave their abuser. They also believe that victims are free to leave abusers at any time, and will naturally do so once the level of violence becomes enough to force that change. However, leaving does not usually put an end to the violence. Instead, it actually increases existing dynamics of violence and can initiate new levels of violence and new forms of retaliation from the abuser to the victim. According to Ann, many women fear that the violence will escalate once it is reported, and things will only continue to get worse. She also says that it is not uncommon for family pets to become a target of violence. “It is sometimes best for the victim to stay and find the right time, tools and venue before they leave,” says Ann.

The YWCA Greater Flint has many programs in place to help domestic violence victims, including a 24-hour crisis hotline and a shelter for women and children. The YWCA SafeHouse is a 31-bed facility that provides 30 days or more of safe emergency shelter and supportive services to homeless survivors of domestic violence and sexual assault. Services include emergency shelter, food and clothing, personal advocacy, childcare, specialized children’s activities, housing advocacy, support groups, educational classes, and referrals to community resources. While at SafeHouse, residents may also access all YWCA services, including counseling and legal advocacy services. Upon leaving SafeHouse, individuals may still access the services and return to SafeHouse as often as needed.

Is domestic violence prevalent in Genesee County? Statistics indicate that 1,200 calls were received through the crisis hotline in 2014 and shelter was provided to 335 women and their children. Also, 2,000 individuals received counseling and legal advocacy services. And, domestic violence isn’t just an inner city issue. “That is a complete myth,” Ann says. “It isn’t just a poverty or inner city issue. It happens in every zip code, socio-economic status and culture, in safe communities and at every educational level.” Research also indicates that women are predominately victims of domestic violence but men are also victims. Ann believes statistics about men are under-recorded due to society’s expectations of men. People ask, how can something like that happen to a manly man? “It’s not a gender issue,” says Ann, “It’s all about power and control.”

Perhaps the most fulfilling aspect of Ann’s job as a crisis counselor is seeing victims actually arrive safely to the shelter and get the help they need. “They are black and blue — but they are alive and they are here in a safe environment,” she says. She tells them, “You are not a victim anymore. You are a survivor and now you can soar. We are here to help you.” She is also very touched by how protective the children are of their mothers and how protective older siblings are of the younger ones. “And now that they are in a healthy venue, the sky is the limit for them!” Ann exclaimed.

The SafeHouse accommodates women and children (both male and female) age 17 and younger, who are provided temporary living space, food and clothing. The average stay is 30 to 45 days, according to Ann. They receive crisis counseling, victim advocacy services and referrals to other agencies. Children’s activities and tutoring are offered, as well. “We try to incorporate the family environment they deserve,” she says.

What is Ann’s advice to someone who is a victim of domestic violence? “Pick up the phone and ask for help,” she says. The 24-hour Crisis HotLine number is 810.238.SAFE (7233). She also says they will help victims every step of the way. “We won’t go away. We are here. Don’t be afraid of your own voice. It will get you the help you deserve.” 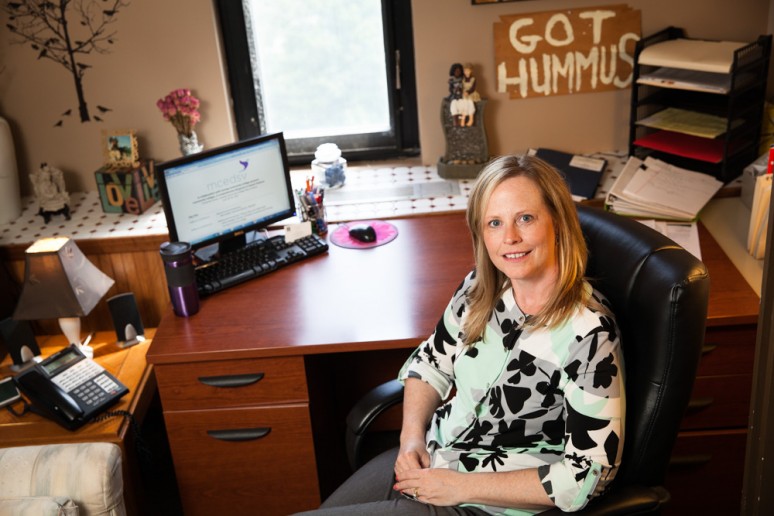 About YWCA of Greater Flint

With a mission to eliminate racism and empower women, the YWCA is the world’s oldest and largest multicultural women’s organization with more than 25 million members in 122 countries, including two million members in 300 local associations in the U.S. Providing safe places for women and girls and advocating for women’s rights and civil rights in Congress, the nonprofit organization receives funding at the federal, state and local levels and from multiple private contributors. It is governed by a Board of Directors and there are many dedicated volunteers. Heidi McAra was recently named CEO of the YWCA Greater Flint. For more info, visit ywcaflint.org.

Lorrann is a 50-year-old African American woman. Drawing disability benefits, she is unable to work a full-time job but volunteers at the YWCA. Some days, she is there many long hours and goes home very tired. She volunteers on holidays. She volunteers whenever they need someone. And she does anything that is asked of her, from folding and sorting clothes, answering the phone at the front desk, to sending faxes, and making photocopies. Why? Because Lorrann was a victim of domestic violence and is eternally grateful for the help she received from the YWCA. “It is a privilege to help them for giving me a safe place to stay,” says Lorrann. This is her story.

For many years, Lorrann lived with a man who physically abused her. But he didn’t want the world to know what went on behind closed doors. “He would never hit me in the face,” says Lorrann. “He didn’t want anyone to know that he was a monster.” So the bruises and scars were left on her legs or other parts of her body that were covered by clothing. Lorrann’s abuser didn’t just physically hurt her; she was also emotionally abused. “He told me I was ugly and that I was dumb. He kept me from contacting my friends and my relatives. He made me feel I couldn’t do anything on my own. I was a prisoner in my own home. He brainwashed me. He used my weaknesses against me.”

Lorrann left her home many, many times and sought help through the YWCA. She would always end up going back to her abuser, because she thought he would change. He never did. But one day, she woke up and said, “Enough is enough,” and realized that she couldn’t change him. “The only thing I could change was me,” she said. And she finally realized that what he was doing to her was NOT okay. “I had to ask God for direction,” Lorrann said, “and God put people in my path to help me.”

While it hasn’t been easy, Lorrann takes great pride in standing on her own two feet. She has her own place and the confidence she needs to live on her own. “It’s been a struggle,” she says. “Co-dependency with another human being is hard to overcome. He was my everything. I wanted someone to love me and I gave him all my power.” She has not required the services of the YWCA since 2011 and is so grateful for the tools they gave her to have a better life. “That place was my sanctuary, “ she says. “When I was there, nobody could hurt me anymore. My life was like a horror movie and I am blessed to be alive. I’m so grateful for the YWCA. They saved my life so many times.”