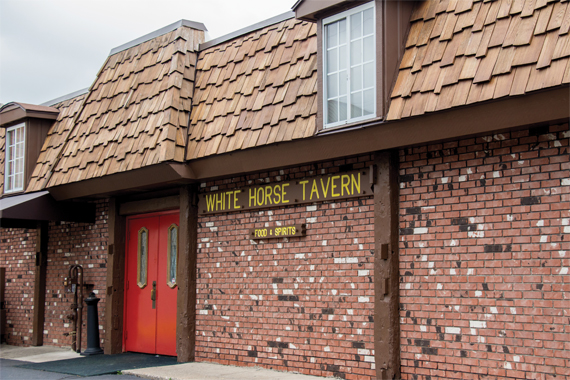 The White Horse Tavern has been described as the Cheers of Flint: a place where “everybody knows your name.” The neighborhood pub was founded by John G. Poulos, and John’s sons, Chris and Steve, are the current owners. They come to the restaurant business naturally: their grandfather, George Poulos, owned Famous Coney Island back in the 40s. After the Flood of 1947, George and John reopened as the Motor Lounge. In 1973, exactly 40 years ago, urban renewal spurred the family to move to its current location on Court Street as the White Horse Tavern.

The White Horse Tavern maintains its original character and many longtime employees. Maddy Skidmore has been tending bar at the White Horse since 1977 and loves every minute of it. With a flamboyant personality, she says she just didn’t fit in to the typical office setting. At 67, she still walks two miles every day and works full-time. “There isn’t anything I can’t do by myself,” she boasts. She loves her job because it’s never boring. “And, I have great bosses,” she smiled. “Maddy’s been here 37 years and we trust her 100 percent!” says Chris.

Not a day goes by that one of the Poulos brothers isn’t on hand to help bus a table or mop a floor. They take turns working the day and night shifts, as the pub opens for breakfast at 7am and stays open until 2am, seven days a week. Chris says the pub’s greatest asset is the 18-member staff. “Our employees are our extended family,” says Chris. There are also many longtime, regular customers. “Everybody knows everybody here,” says Steve.

Back in the day, when there were three shifts of factory workers in town, the place was really hopping. The pub’s character has changed since then, as the original menu at the White Horse was very simple. Today, food service accounts for about 65 percent of the business. Customers are an interesting mix of local students, factory workers, teachers, attorneys and politicians. The White Horse Tavern has even served food to a U.S. president! In the 80s, the owners received a call from Bishop Airport requesting a delivery for Bill Clinton when he was in Flint during his presidential campaign.

The pub is known for its good food – from breakfast served any time, to burgers and pizza. “Breakfast is big,” says Chris, “and everybody loves our French toast!” He added that quite a few breakfast clubs meet there on a regular basis. The burger, a huge customer favorite, is made of fresh Black Angus beef, hand-patted and cooked to perfection. Pizza was added to the menu when the pub celebrated its 20th anniversary. The handmade pies are cooked in an old-fashioned stone oven and all of the toppings are fresh. “People definitely come in for the pizza,” boasted Chris, who says that it’s particularly popular on weekends when in-house diners get it for half-price. “The super pizza weighs five pounds!” exclaimed Steve. The menu includes full dinners, soups, appetizers and salads, including their famous Greek salad.

This month, The White Horse celebrates its 40th anniversary, and to extend the festivity to their customers, Chris and Steve are offering “half-off” specials for the 1/3-pound burger, Greek and tossed salads, onion rings and French fries throughout the month of September. “It’s our way of thanking our faithful customers,” says Chris.

Whether it’s a burger, a beer or a home-cooked breakfast you crave, look for the big white horse when you drive into Flint. Stop by and help the Poulos family celebrate four decades of serving their community; you’re sure to find good food, drinks and conversation with the regulars. And don’t forget to say “Hi” to Maddy at the bar!

Are you interested in purchasing photos from this story? Go HERE and select the “White Horse” category.