To kids in a local Flint neighborhood, Vincent Smith, who wears sweats and a t-shirt bearing a #Eating logo, looks like a regular guy trying to rake and clean up a plot of land on Cottage Grove Avenue. Until they start talking to him – and learn that he’s no “regular guy.”

He’s Vincent Smith – the former University of Michigan running back and return expert who played football in Ann Arbor’s Big House from 2009 to 2012. They also learn he picked Flint as the place to start his Team Garden Flint #Eating project – a non-profit organization which leases land from the Genesee County Land Bank to help Flint Community School children learn to grow fresh vegetables, fruits and herbs. Why? Because Flint reminds him of his hometown Pahokee, Florida. 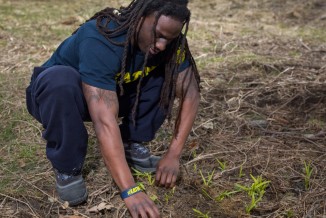 “I came from a town with significant unemployment, social, health and crime issues,” says Smith, distinctively known as the player tackled by South Carolina’s Jadeveon Clowney who knocked off his helmet in the 2013 Outback Bowl.

Smith, who earned a Bachelor of Arts with a major in African American studies and a minor in sociology at U of M in Ann Arbor – Smith’s “second hometown” as he calls it – already established a thriving garden project called H.O.P.E. (Helping Other People Eat) in his resource-poor hometown of Pahokee with fellow U of M football players and Pahokee natives, Martavious Odoms and Richard Ash.

Fundraising efforts and support from community leaders are proof he can do the same in Flint. “We’re uniting efforts with the Crim Foundation, The Land Bank and two elementary schools – Durant Tuuri Mott Elementary, and Potter Elementary – to show kids how to take responsibility for their own health, grow vegetables, engage others and give something back to the community,” Smith says. And it all couldn’t come at a better time. “Eating healthy greens can help draw lead out of your body,” he explains. That, he believes, is motivation enough. 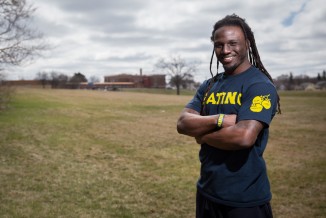 Smith originally talked about helping Flint when then fellow U of M football player and Flint native, Thomas Rawls (who is now an NFL running back for the Seattle Seahawks), also talked about doing something for his community. “I knew I wanted to help Flint. Team Gardens is designed to bring the community together,” says Smith. He knows how to advantageously make use of his athletic status and plans to enlist gardening help from some of his NFL friends – he’s pals with Bill Bentley of the Detroit Lions; Pernell McPhee, Chicago Bears; Eric Moore, New York Giants; Antone Smith, Atlanta Falcons; Richard Ash, Jacksonville Jaguars; Merrill Noel, Buffalo Bills and Anquan Boldin of the San Francisco 49ers – to change the lives of young people.

Football fans, community members, and anyone interested in urban gardening can make a difference and join Smith’s team. “You never know who will be out with us to help. I’m passionate about helping kids in Flint stay out of trouble, help them to have pride in their community, learn to be independent, teach the power of teamwork, and introduce them to growing their own food,” he says.

Eating fresh veggies and fruits was part of Smith’s own childhood. “When my dad came home from work he always brought us fresh produce to eat,” says Smith, who remembers eating corn, apples, oranges and mangos as a youngster in Florida. “I picked and ate oranges right off the tree,” he adds. His mother, Sabrina Smith, a former state-championship softball player, believes her struggle with high blood pressure, six-year dialysis schedule and recent kidney transplant helped to convict her son’s belief in keeping a healthy lifestyle, eating fresh produce and educating others about its value. “He was exposed to healthy eating very early,” says Sabrina. “My husband worked at a vegetable packing plant and often brought home fresh corn. I baked, boiled and grilled it.” 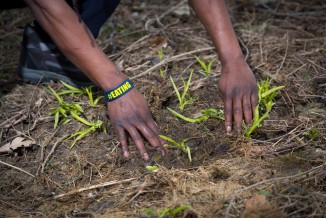 Fruits and vegetables were ordinary menu items for him, so Smith notices when that’s not the case for others. “Today, it seems like kids are bombarded with junk food advertisements,” he says. “I am hoping the Team Gardens will inspire and introduce kids to healthier eating options.” Smith has partnered with Flint School officials and the Crim Foundation to implement his vision for giving school children a chance to decide what they’d like to plant, grow it, and eat it. “It’s similar to the concept of ‘teach a man to fish and he’ll eat for a lifetime,’” explains Smith. “I want to help kids learn to plant their own garden, so they’ll see firsthand the value of eating what they grow with their own hands.”

Putting shovels, seeds, gloves and other equipment into the hands of the kids is going to require monetary donations. Luckily, fans and others want to help. For instance, Joseph Alnarshi, a UM-Flint student from Fenton who is working on a master’s degree in public health, is inspired by Smith. “We met on the MGo Blog based in Ann Arbor,” says Alnarshi. “I couldn’t believe he was mentioning Flint and how he wanted to help improve the city – he isn’t even from Flint. I found it pretty noble that he wants to help our city.”

Now, the two collaborate and bounce ideas around. “We’re looking into options such as getting a tractor and rototillers to make tilling the land easier,” says Alnarshi. “Team Gardens will help young people have accessibility to fresh produce, because right now, there are not many options for Flint residents to obtain healthy, nutritious foods.”

Whether he’s playing football or planting a garden seed, Smith is all about doing his absolute best. “I’ve always been undersized, so that means sometimes overlooked,” he says. “It motivated me to work even harder and find a way to stand out. I’m always reinventing myself and trying to improve – and what I want most is to help others have that same determination. I want to engage kids to be active and involved in their community and invest in their own health.”