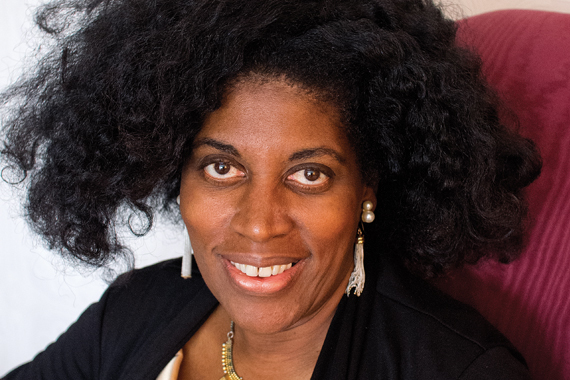 Semaj Brown knew that the way to her man’s heart was through his stomach… and it was evidenced by his weight. “I was 300 pounds when I first met my wife,” Dr. Brown remembered, “and Semaj saved my life.” Now, this dynamic duo changes the lives of people in Genesee County through their artistic approach to eating. Feasts and Fables from the Planted Kingdom is a story cookbook as well as a musical, lyrical CD written and recorded by Semaj that takes a boring vegetarian lifestyle and spices it up with vegetable liveliness – literally!

The storybook cookbook – “it’s not a mere cookbook,” Semaj insists – was a project that evolved over many years, and it began with the Browns on a personal level.

Dr. Brown recalled how years of bachelorhood had resulted in bad eating habits. “Late nights in medical school and later at my practice led me to the convenience of fast food,” he said. Dr. Brown felt the irony of being a dangerously overweight medical doctor, but he couldn’t change on his own. He needed the help of a brilliant, charismatic, determined woman. One evening, Semaj cooked a meal for her husband. “It was a feast,” he said, “a feast including all of my favorite foods – salmon, fried chicken, mashed potatoes – and I ate to my heart’s content.” Mrs. Brown asked how he liked the meal, and the good doctor patted his large stomach and said, “It was wonderful, dear.” “I’m glad you enjoyed it,” she replied, “because from this moment on, you and I are vegetarians.” Dr. Brown was startled, but he realized that his wife was unshakably serious. As they embraced this new lifestyle, the Browns also embraced slimmer figures. The couple’s weight loss amounted to nearly 175 pounds combined, but this was not the only, nor even the most significant benefit of their lifestyle change. That honor goes to increased health and energy. “I just feel better,” says Dr. Brown. “When I had a pretty serious medical procedure done a few years ago, my rapid recovery astounded my surgeons.”

Dr. Brown admits that he was initially concerned about the gustatory blandness of a vegetarian diet. His fears were groundless, for Semaj is a miracle worker in the kitchen. “So many people think that you’re limited to the same few flavors if you eliminate meat, but this is categorically untrue,” Semaj insists. “If you want Mexican food, you simply use traditional Mexican spices and flavorings to create that palette. The same goes with any other cultural flavors.” In addition, Mrs. Brown points out that many vegetables have unique flavors that cannot be artificially replicated.

As Dr. Brown began to shed pounds thanks to his wife’s cooking, he noticed that many of his patients were laboring with obesity as he once had. “We have an obesity crisis on our hands,” he said sadly, “people eat empty calories, becoming full but not fulfilled.” Look at the food on grocery shelves today: excessive processing has erased any resemblance to living things. These nutritionally meager products, combined with a frantically fast society, have replaced the healthy, home-cooked meals and family time that used to be called dinner. Semaj says “Dining as an experience has gone by the wayside. When you dine, you should become fulfilled by ambiance and conversation; savor the food you’re eating, instead of just trying to fill your stomach.”

As Dr. Brown realized the error of his ways, the far-seeing physician began what the community has come to call a medical ministry. Healthy weight loss was the ostensible goal, but the mission was to transform the way people see food, particularly vegetables. In 2006, Dr. Brown began a call-in, ask-the-doctor radio program called “Freedom from Fat.” Later in 2006, The Browns sponsored and hosted a variety radio show, which featured such segments as What Do You Do When the Cravings Come? and What’s for Dinner, Mrs. Brown? “For years, Semaj had been writing an interactive curriculum for the seminars and classes I was hosting,” Dr. Brown bragged, “so it was only natural that I should include her skill with words in my radio show.” Semaj presented research (she was a biology major in college) on the histories of her vegetable recipes. “One day,” she remembers, “something prevented me from doing my research, but you know how radio is – the show must go on – and when it came my turn to speak, I blurted out the first thing that came to my mind: The onions revolted!” Semaj, who is also a poet and spoken word artist, made up a story off the cuff about an onion revolt in a place called The Planted Kingdom. “My voice went up two octaves,” she recalled with a laugh, “but the phones lit up when I had finished telling the story.” In this manner, the prim Mrs. Brown, who narrates her way through the magical land of the Planted Kingdom, was born.

With the addition of more characters, such as Blanch Broccoli and Captain Zucchini, the radio show became so popular that Mrs. Brown soon had requests to turn her stories into a book, complete with accompanying recipes. Now, Feasts and Fables has been reworked to create a one-woman theater show, starring Semaj as Mrs. Brown (and everyone else). Through Semaj’s talent and obvious love, her characters become larger than life in this entertaining, informative show. Meet Granny Smith apple tree, the onions who started it all, and poor Miss Potato Chip, who was abused and diluted of her natural antioxidants by copious amounts of salt, when the show debuts at Bower Theatre on April 25.

Dr. and Mrs. Brown’s desire to transform their community is only matched by their creativity to meet the needs they see. “We see a lot of people who are marginalized;” said Semaj, “but instead of becoming desensitized, we become more creative.” To that end, organizations such as St. Luke N.E.W. Life Center, The Links, Incorporated-Flint Area Chapter, State of Michigan Zeta Phi Beta Sorority, and Flint Chapter Pierians Inc., are selling tickets to the show. Half of the proceeds will benefit these charities. “We can’t do it all on our own, but we can use the infrastructure of these wonderful institutions so that our work has a trickle-down effect,” said Dr. Brown. “This project has truly been a work of love,” added Semaj, “and we are dedicated to educating through entertaining engagement. It’s the only way to reach people.”

Join the Browns in their veggie revolution: try one of Semaj’s recipes, buy the CD, or attend their show, Enter Planted Kingdom. To become a Fundraising Associate, or if you are interested in sponsorship, contact the Browns at mrsbrown@plantedkingdom.com.

Are you interested in purchasing photos from this story? Go HERE and select the “Feasts and Fables” category.

Semaj, who refers to making chips as “genocide of potatoes,” and calls avocados “a delicacy,” says that people have become too far removed from living food. To prove that vegetables can serve as hors d’oeuvres, entrées and dessert, she invited My City Magazine to her home for “a small repast,” which was in fact a seven-course meal full of flavor and wonderful conversation. We stuffed ourselves with dishes from the following menu:

Orange Heirloom Tomatoes infused with Dill-enhanced Hummus and a drizzle of Agave with a garnish of Broccoli 5 Stalk slivers, Lemon Pepper and toasted, gluten-free Bread Crumb and Quinoa topping with just a hint of Tamari Sauce

Curry brings the memory of eastern markets and the scent of spice to this hearty soup surprised with the tang of Granny Smith apples and the savory flavor of sautéed Golden Onions.

1) Mango Olive Skewers drizzled with Lemon Pepper and a drizzle of Warmed Honey
2) Sautéed Shiitake Mushroom skewers enhanced with the flavor of seared Sage, a bite of Scallion and a slice of boiled Egg White, seasoned with a dash of Cayenne Pepper and Tamari Sauce

Quinoa, roasted Broccoli and Basil, and other Italian favorites: Oregano and Onions, and Tomatoes baked with mild Chili Peppers floating on a Marinara-Tamari-Sauce pond