BC Comix is a haven for gamers and comic book enthusiasts looking to be transported to other worlds. There, people who are interested in tabletop games, interactive games and popular comic books can spend hours away from the worries of their everyday lives.

“There’s no judgement here. At BC Comix, it’s all about ‘come and be who you are.’”
Bob Huffman, owner 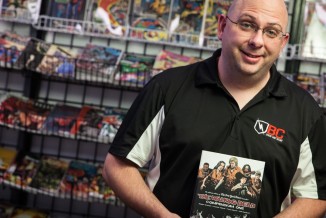 Bob Huffman, the owner of BC Comix in Fenton, Lapeer and Battle Creek, opened his business to bring together gamers of all ages. Encouraged by friends who are also gaming fans, the Huffmans opened their business six years ago. “We started running and we haven’t looked back since,” Huffman says.

A long-time gamer and comic book reader, Huffman has been collecting since he was ten, and playing tabletop and card games since he was 13. “It was always a passion for me,” he shares. “Owning a business is a passion for me. Being able to make a living with what is also the hobby that I enjoy is a bonus.” 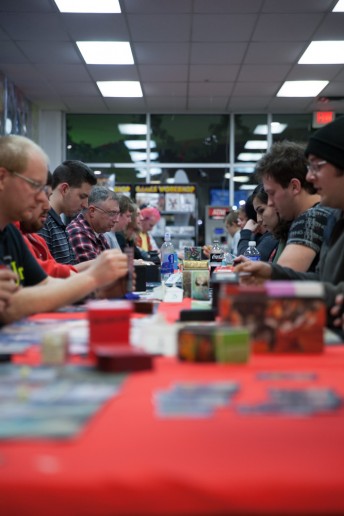 BC Comix’s most popular line of games brings in hundreds of players a week, ranging in age from nine years old to 50. Games like Magic the Gathering, Pathfinder, and Dungeons and Dragons attract the most players, followed by other board games, comic books, and tabletop miniature games. You don’t have to bring money to play there – just your own materials and your imagination.

The stores host well-attended events for every game they sell, sometimes with up to 300 guests. Tournaments are typically held at the stores, but sometimes the Huffmans rent event halls to accommodate large turnouts. The store’s pre-release events are the most exciting and most well-attended, according to Huffman. “They love the environment that we created, and they want to come and be part of it,” he says.

Aaron Rutledge of Fenton, a UM-Flint student, has played games at BC Comix for six years, since before its grand opening in 2009. “When I was going to high school, we didn’t really have anything for teenagers to do,” he shares. “Having a store like this in your community does a number of things; like teenagers choose to spend their time here instead of more destructive habits. It gives a sense of belonging to a lot of people. They find something they have in common here.” 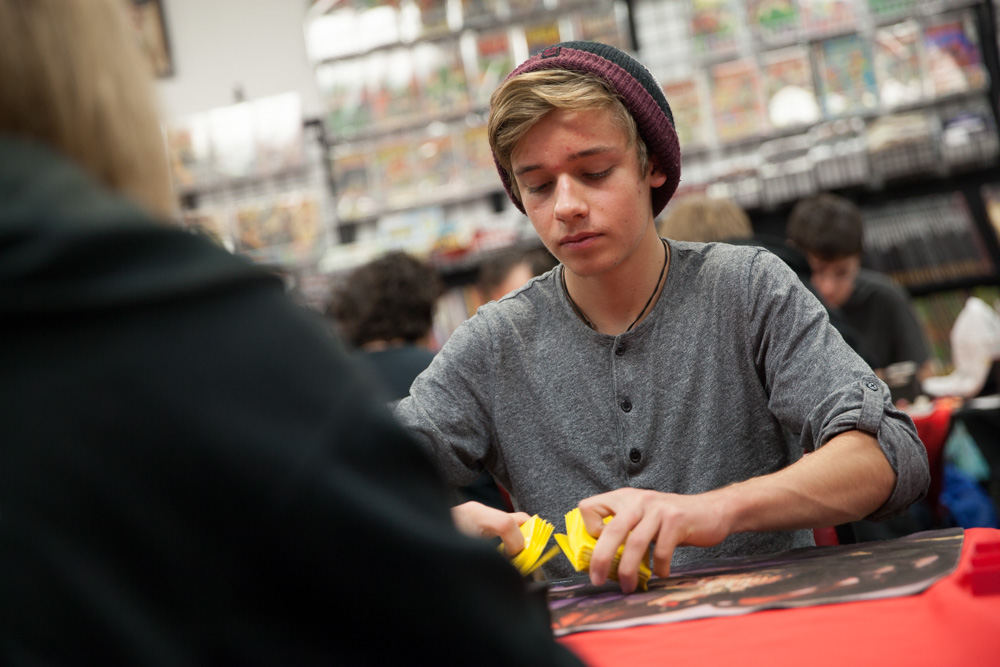 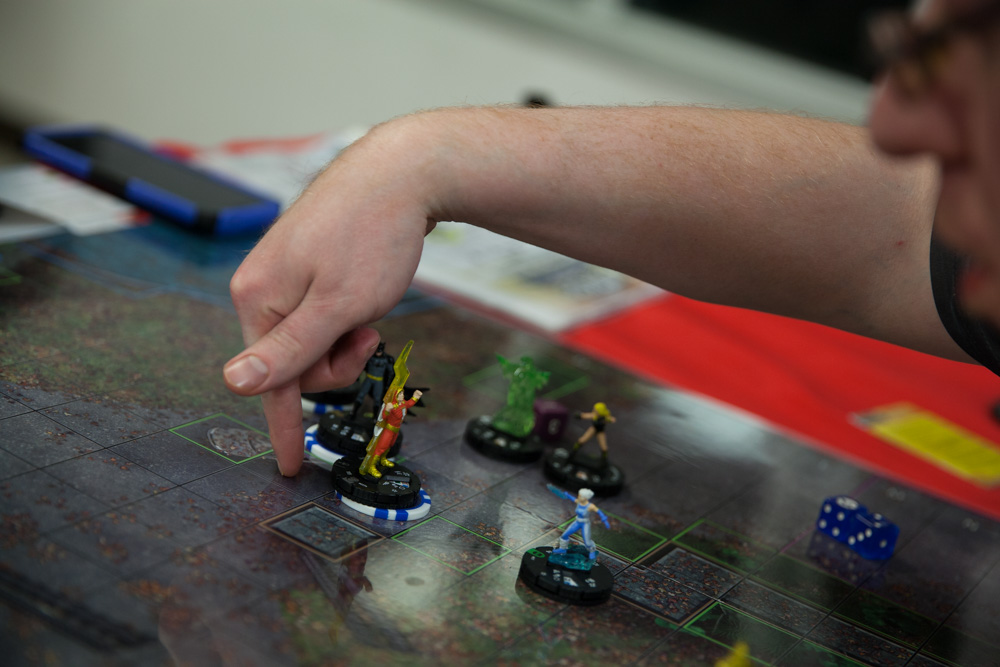 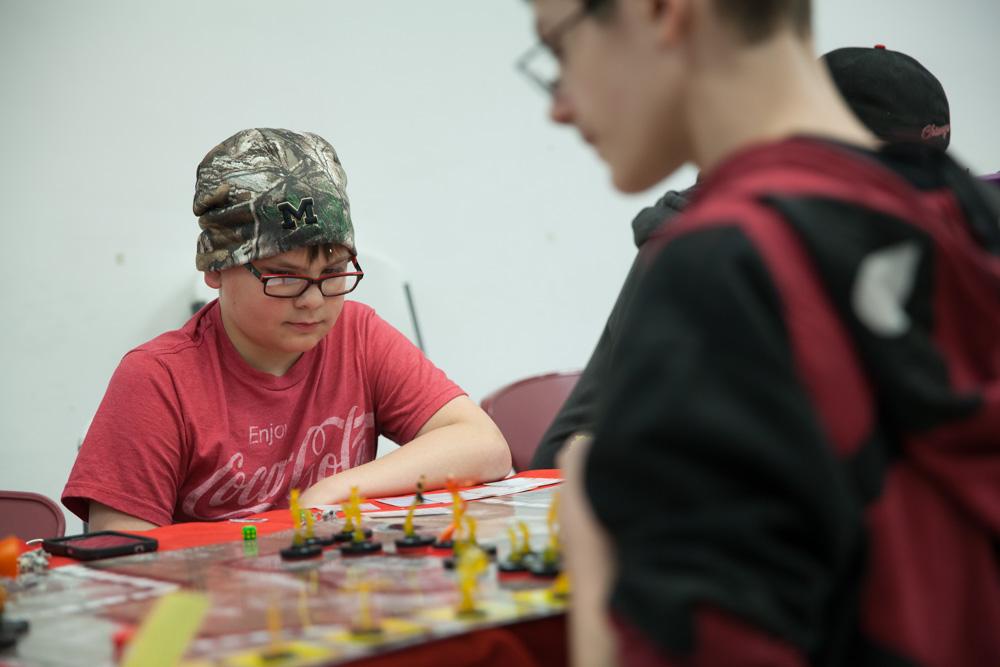 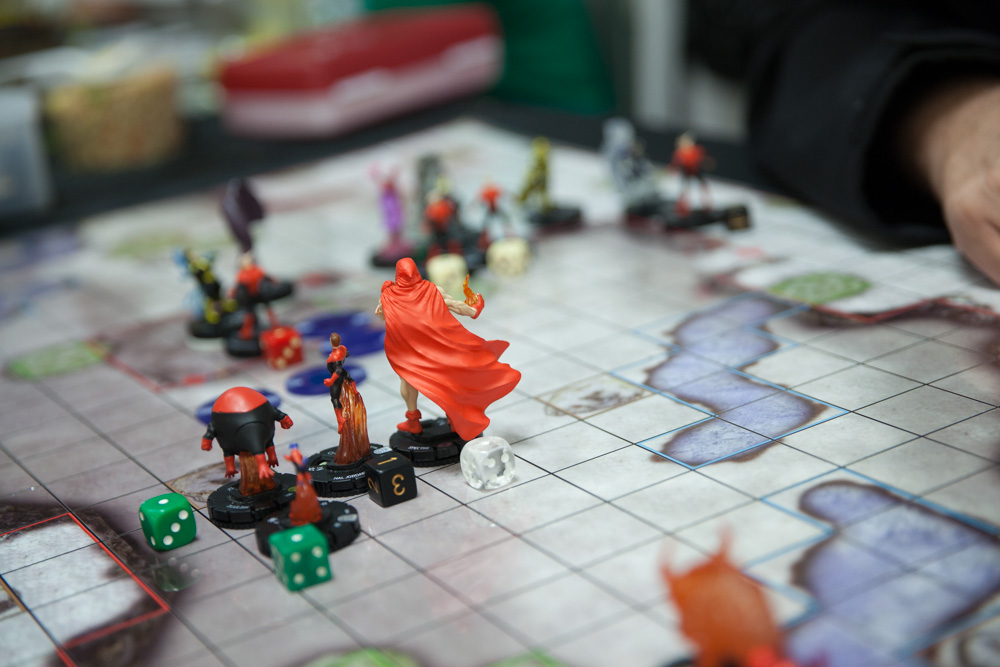 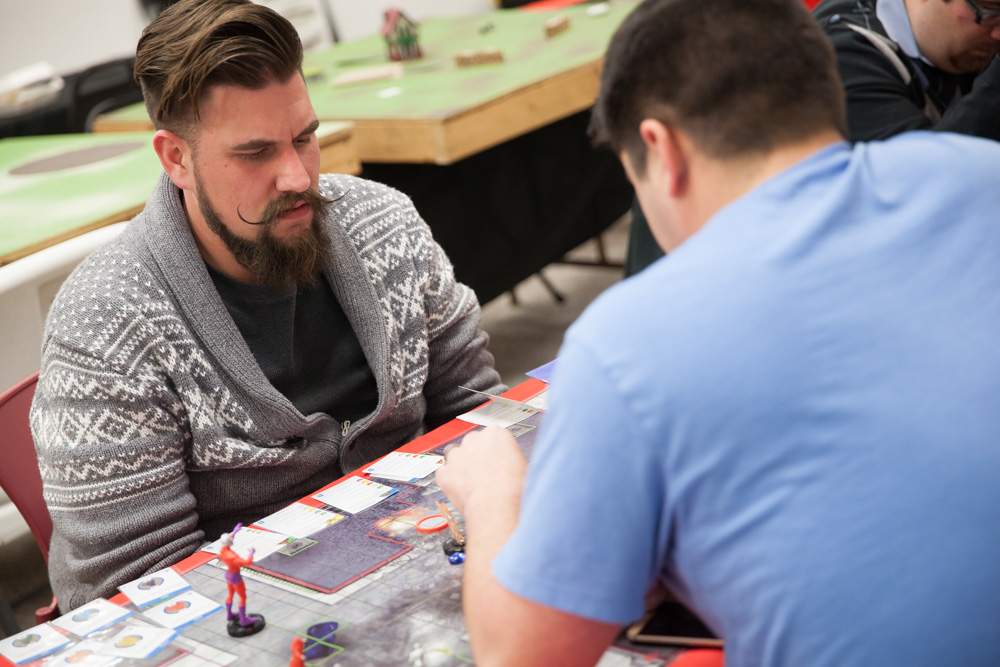 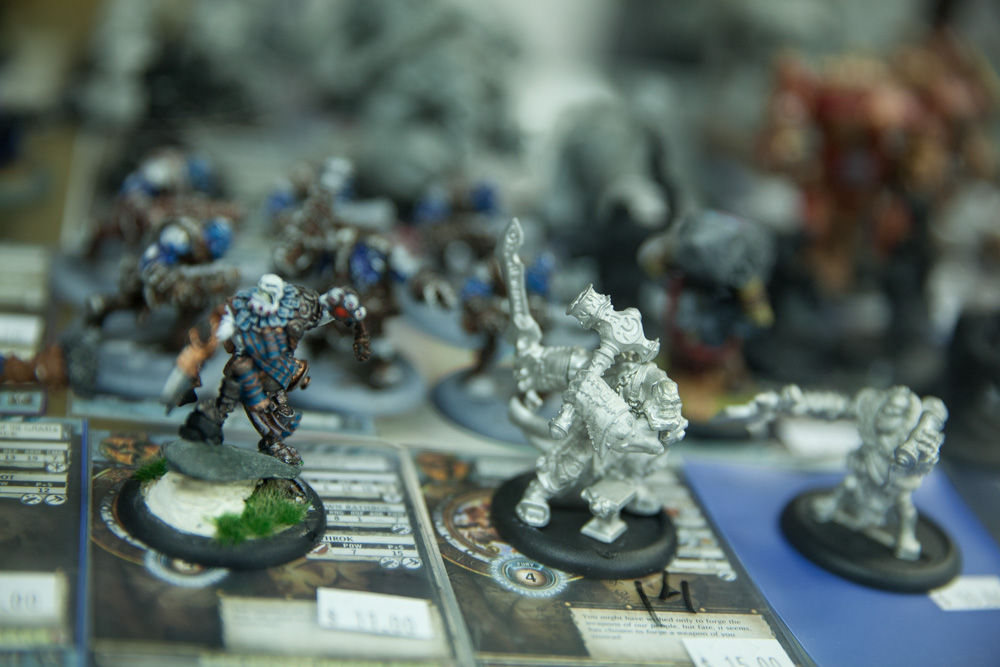 Another player, UM-Flint student Joslyn Lambaria of Davison, played video games growing up, but found this new community about three years ago and began her hobby with card games. “It’s a good community,” Joslyn says. She has been a regular gamer at BC Comix for about two years, believing the long drive is worth the experience. “Bob, his wife, and his kids are here all the time, so it’s very family-oriented,” she says. “Other game stores aren’t quite as inclusive as that, especially being a girl player. I have found a lot more acceptance here.” 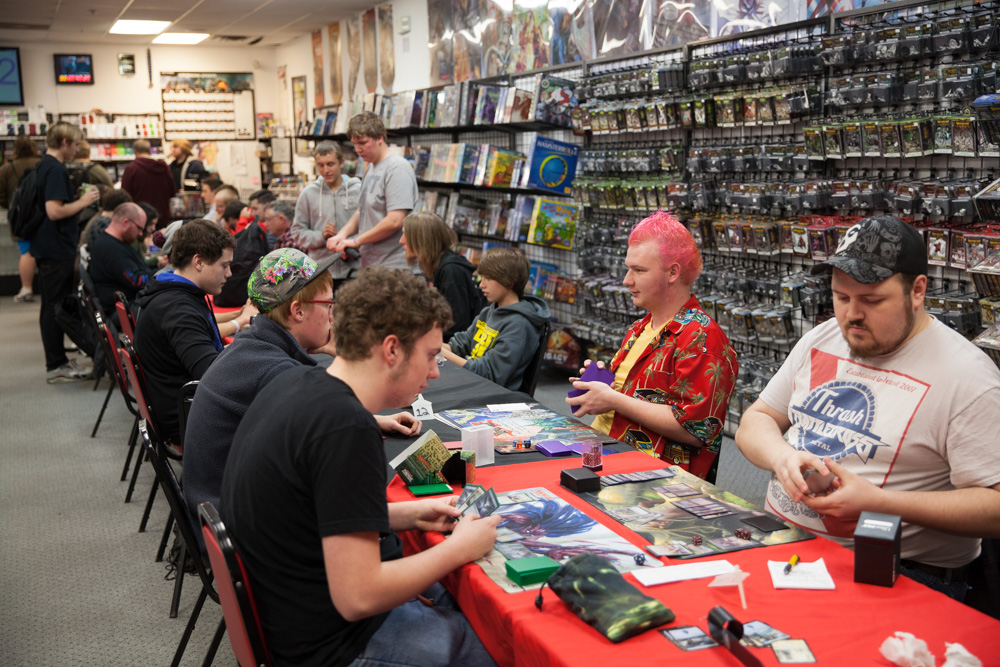 Competitors come in, ready to win. “I’m probably more competitive than a lot of players,” Joslyn says, adding that she drives all over the U.S. to play in tournaments on many weekends. “When it comes to playing against the guys, it levels the playing field,” she says. “Your gender has nothing to do with it. If you win, you win.”

With these tournaments held at the BC Comix, participants compete for a prize pool (cash or store credit) and to become a first place champion. “It’s this really awesome mix of people who just want to have fun and people who want to have fun but also want to compete,” Huffman says. “We capture the essence of casual fun and the spirit of competition, which is really difficult to do. It’s taken us six years to customize our programs to cater to all the needs of people who are invested in the games.”

Nowadays, when most people hear the word “gaming,” they think of video games. What’s unique about BC Comix is that they do not sell video games. “I see the store as a place where you can come and unplug,” Huffman explains. “I don’t think we will do anything with digital products.” Even though Huffman likes the idea of “unplugging” from everyday computer devices in order to play at BC Comix, the store does have an option to purchase gaming materials online. 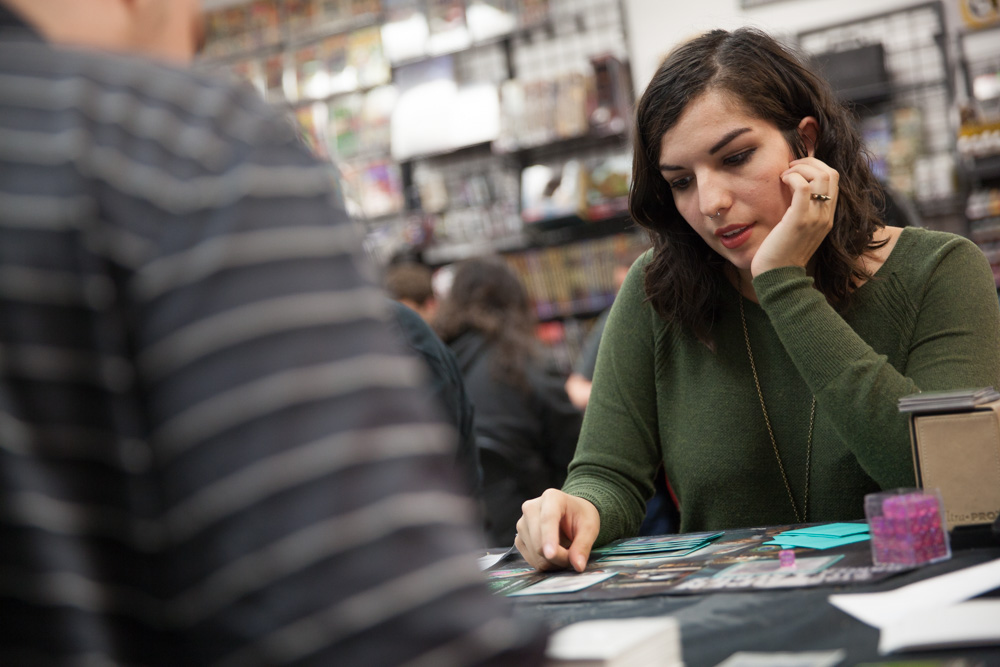 Currently, Huffman is working on getting into the comic book side of things and holding more comic-related events. He hopes to someday open more stores in Michigan and expand into more national tournaments to visit other gaming communities. “Big changes are on the horizon,” he shares. “I want to see more people become part of our community.”

In addition to Huffman’s success with the store, he works “behind the scenes” in the community with five different schools in the area, where he is collaborating with teachers to help encourage reading for kids by using comic books.

“A place like this brings an opportunity for young people who have a common interest and an environment that is fun and exciting,” says Huffman. “There’s no judgement here. At BC Comix, it’s all about ‘come and be who you are.’”