With his chiseled physique, steely gaze, amped-up demeanor and tattoos snaking around his body, Troy Lamson leaves little doubt that he is a rising Mix Martial Arts star.

Dubbed “Pretty Boy,” the Flint native and former Kearsley High School and Michigan State wrestler has always been fiercely goal-oriented and that is evidenced by the way he makes his way to the cage with the theme song “Pretty Boy Swag” blasting from the speakers as he is introduced. 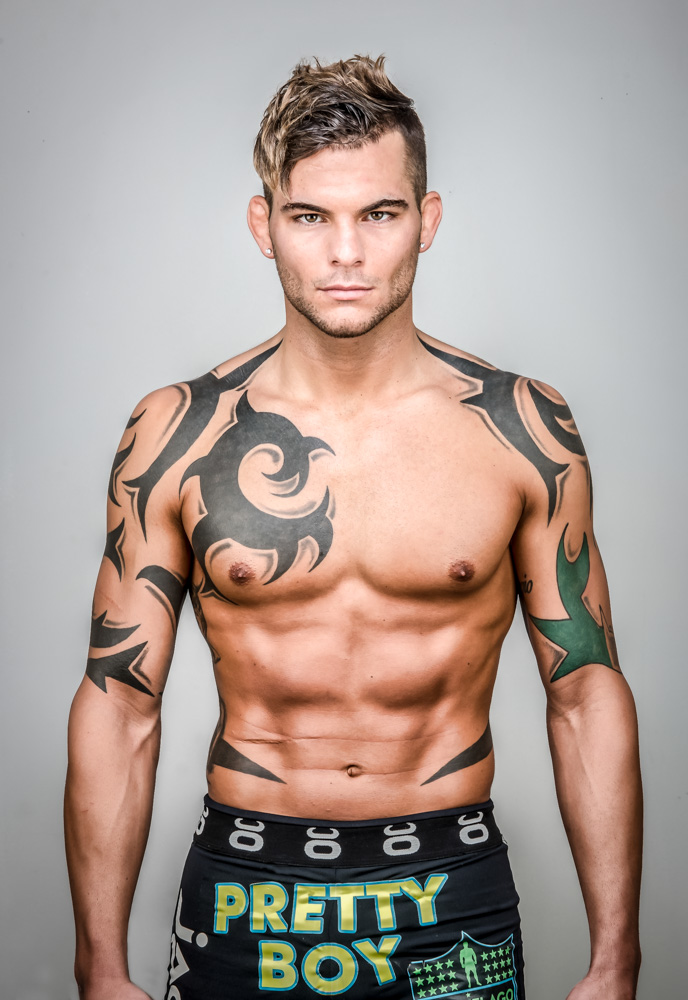 Though elite-level wrestling is in his background, he is far from methodical. Instead, he prefers taking the fight straight to his opponents in suffocating fashion. All of Lamson’s pro victories have required an average of less than seven minutes. Full-distance MMA bouts last 15 minutes.

Boasting a 7-2 record after a bloody, second-round stoppage of Alexander Trevino on November 5 2016, Lamson sits third in Tapology’s Michigan Welterweight (155-pound) rankings and eighth in the Michigan Pound-for-Pound rankings. He is also 27th of 399 fighters in the Midwest Welterweight rankings.

“Things are going pretty well so far as a professional, even though I had two losses earlier than expected. But all that’s done is motivate me to work even harder,” says Lamson, who now lives and trains in East Lansing. “Right now, the focus is building on my last win with bigger wins against stronger competition and then, hopefully, exciting things like the UFC and the money that goes along with it will follow. I feel like I am knocking on the door of some big things and the fact that all my wins are by stoppage is a big bonus.”

Before he could knock on the door of possible stardom, however, Lamson was forced to deal with being knocked down – twice. After posting a 17-0 amateur record and dispatching his first six professional foes – three in the first round – he suffered a leg injury in the opening round against Justin Jaynes last May and dropped a unanimous decision.

In September, Lamson was caught in a leglock just 101 seconds into a bout against unbeaten Nick Browne, and was forced to submit in the first of a three-fight contract with California-based King of the Cage Promotions. “I went through a tough period, no doubt,” he says. “Getting hurt early in the fight against Jaynes made it very difficult, but I just kept fighting. That’s all I could do.”

As if suffering his first MMA loss was not enough, the injury sidelined him for a month. He eventually resumed training and felt ready to hand Browne his first loss, but it was not to be. “We were on the mat and I was doing what I like to do in fights and looking to gain control, but he just caught me in a strong leglock,” Lamson says. “After that second loss, I looked inward and evaluated how I was mentally preparing and approaching fights because I didn’t doubt my skills.” His skills were on full display against Trevino, who came into the fight with a 7-6 mark.

Taking down Trevino with ease, Lamson used powerful elbow strikes to quickly open up a gash on his opponent’s head. The doctor overseeing the fight examined Trevino after Round One and allowed the bout to continue, but the second round featured more of the same, prompting the doctor to end it. 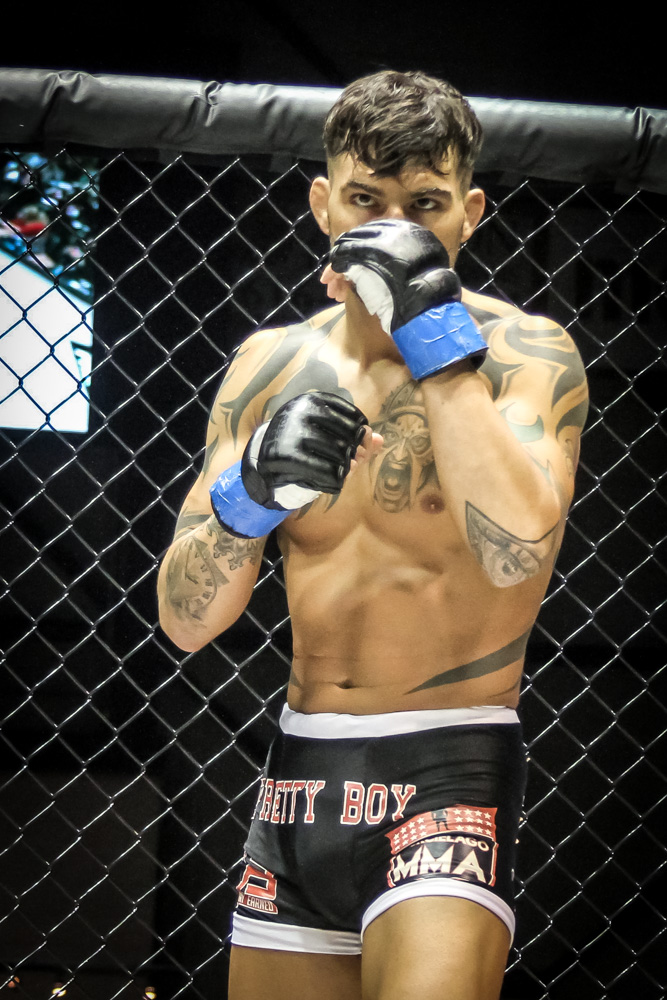 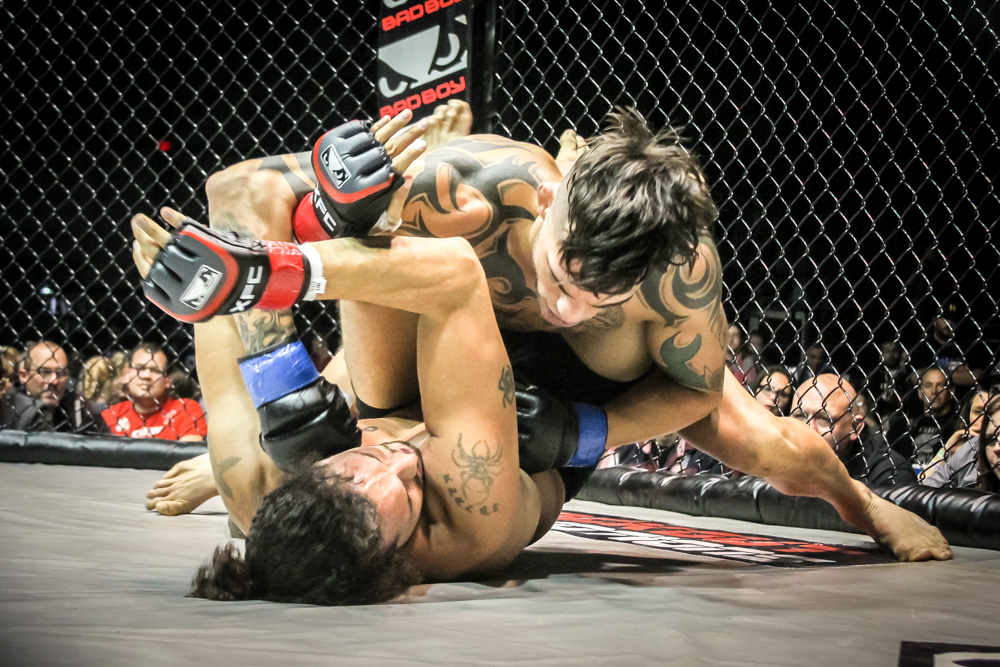 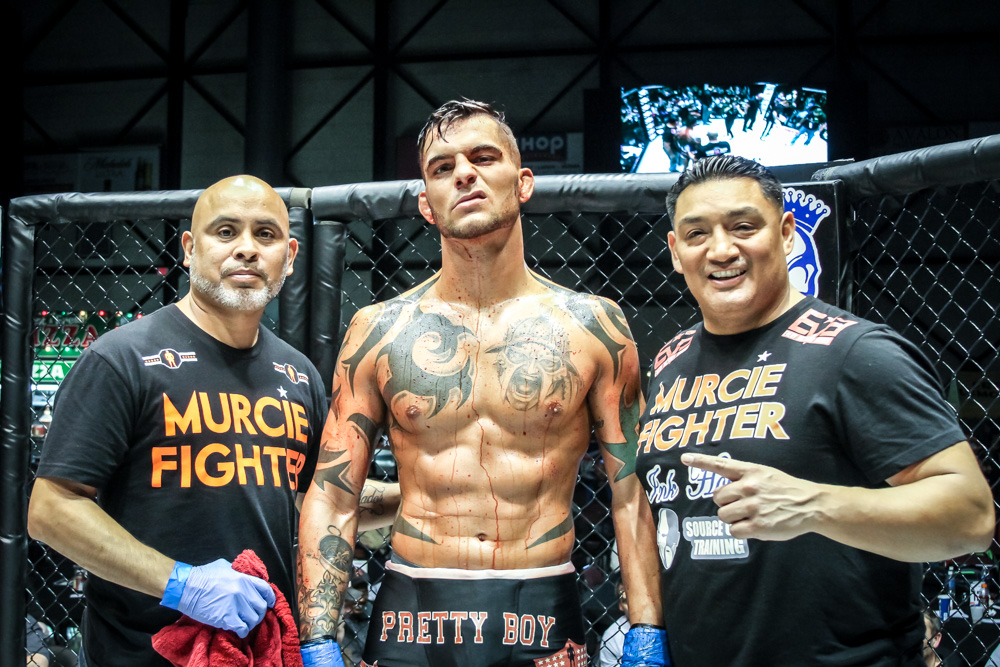 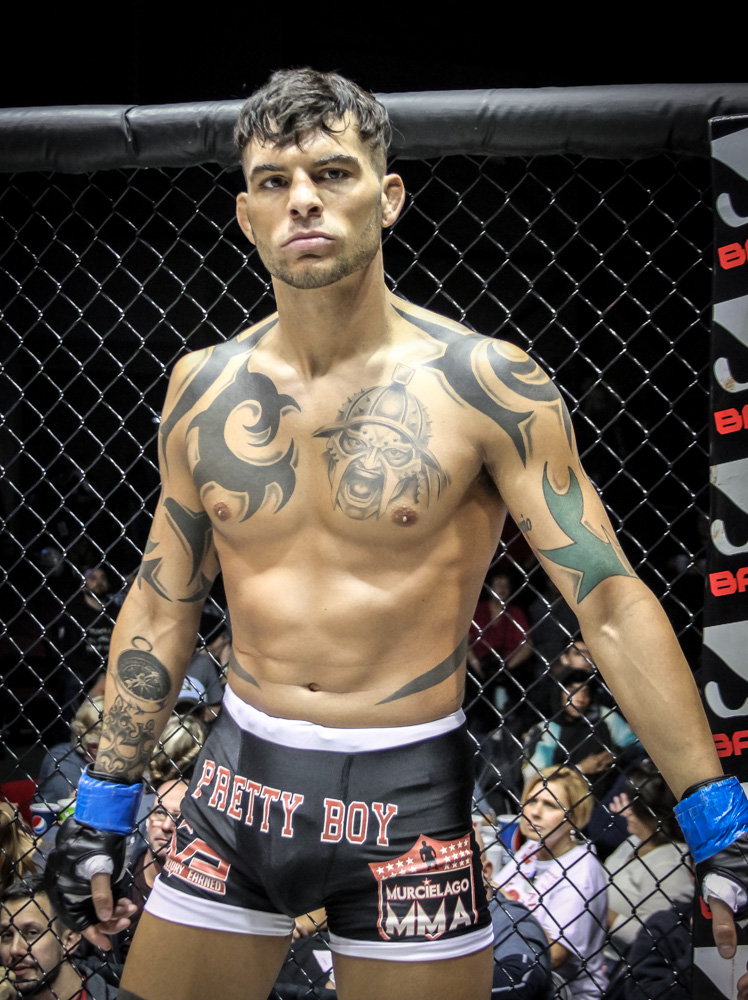 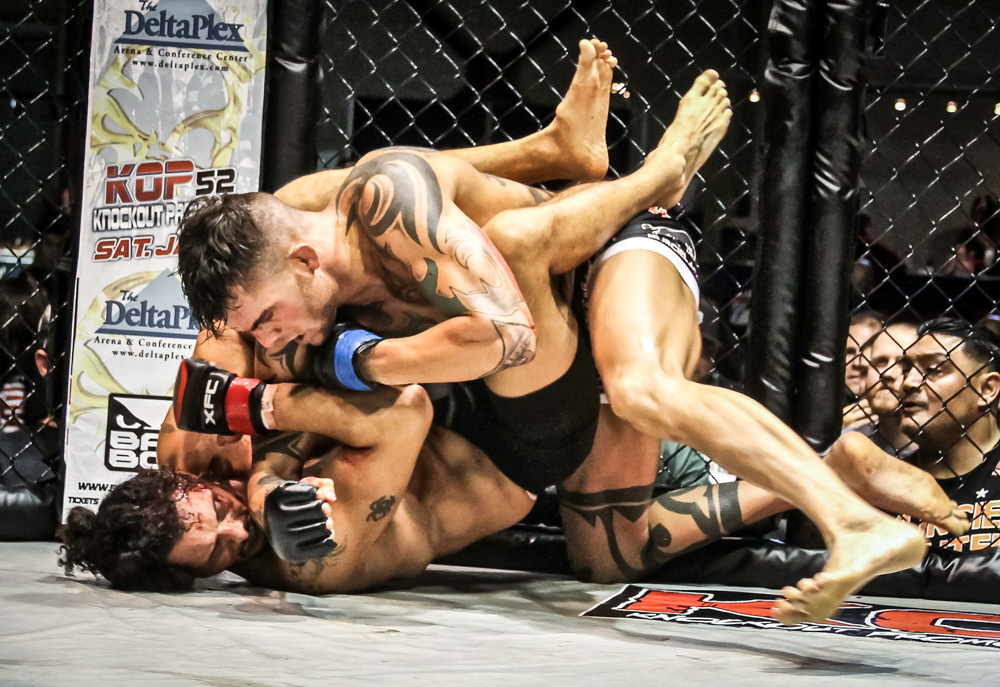 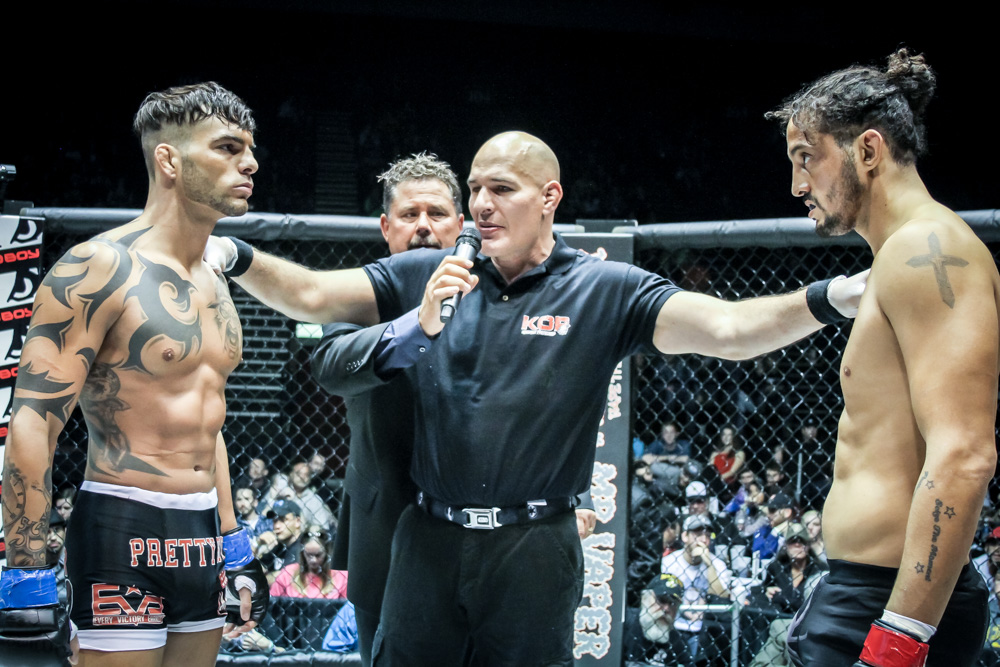 “The losses Troy suffered were an adjustment, because when you have someone who has never lost before, it can mess their psyche and doubts can set in; but we put some things in place to help him deal with it and he responded well,” says Joaquin Rodriguez, who has trained Lamson for six years. “Losses are part of any fighter’s growth process. Handling that adversity has made Troy stronger moving forward.”

His arm raised in victory once more, he began celebrating his return to winning, something he hopes will continue as he completes the final two bouts of his King of the Cage deal.

“I’m hoping to fight again by early February and finish off my King of the Cage commitment with two big Ws,” he says. “That will put me in a great spot.”

Years of dedication to his craft have brought Lamson to his current spot. At age 25, he has already been in the fight game for nearly a decade and has always found solace in the structure it provides. He transferred from Kearsley High to Saginaw Swan Valley after his sophomore year, was a football and wrestling standout at both schools and finished with a 200-25 record, a state championship and high school All-American status. However, Lamson comes from a family of accomplished amateur boxers. His father, John, and two of his uncles were Golden Gloves champs and his grandfather a United States Navy champion. It was only a matter of time before Lamson took up a similar form of combat. That happened when he learned that Kyle Bergquist, one of Kearsley’s assistant wrestling coaches, had begun cage fighting and he soon joined the same gym Bergquist was a part of – Flint’s Ultimate Fighting Academy.

“That meant I was getting home from wrestling practice about 7pm and immediately grabbing another bag of clothes and going straight to Ultimate Fighting until 9:30pm,” Lamson recalls. “But with different things that were happening in my life and with my family at the time – that kind of structure was just what I needed and really helped me later to adjust to a busy college life and other things.”

The prospect of engaging in both wrestling and MMA simultaneously as well as playing football did not intimidate him, and he had already built a 7-0 amateur record just two months after graduating from high school.

“I was 17 when I won my first cage fight,” he says. “My dad had to sign a waiver for me to compete, but it wasn’t long before I decided I wanted to try to make a living MMA fighting and not be a 9-to-5 work slave.”

A highly-sought wrestling prospect, Lamson drew the interest of several Division 1 college programs, choosing Michigan State over North Carolina and Arizona State. “I had actually verbally committed to Arizona State, but then decided to visit MSU and really liked it more than I expected, and learned that one of my heroes [former UFC light heavyweight champion]Rashad Evans also went there,” he says. Also following in Evans’ footsteps, Lamson joined the renowned Murcielago MMA gym soon after his arrival in East Lansing and began training under Rodriguez.

“It’s really a blue collar gym and does not have the greatest facilities, but everybody is dedicated, hardworking and not afraid to mix it up and get dirty,” Lamson says. “It’s not a prissy gym at all and the training is outstanding. That and being part of a Big Ten wrestling program really molded me into a well-rounded fighter.” 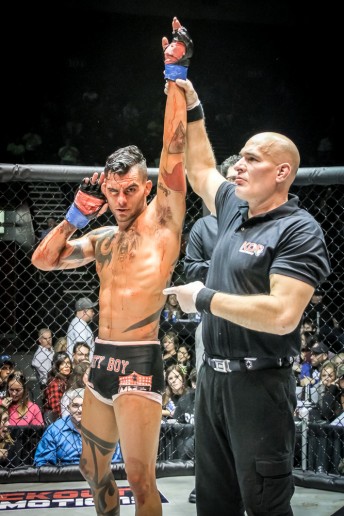 So, the loaded schedule continued for him as he racked up a 51-31 record with the Spartans and remained unbeaten in MMA competition while working toward a communications degree.

He turned pro in November 2014, about six months after graduating from MSU, and his schedule remains as busy as ever.

He works as a co-manager of a pub from 10am to 3pm before training at Murcielago from 4-7pm, taking a break and going to another gym for cardio and strength training from 10-11:30pm. Rodriguez is equally excited about Lamson’s future. “I love the place we are in and Troy has all the tools to reach high levels of the sport, like the UFC,” he says. “Troy is very marketable and would be a good fit there. He also has the perspective to look at the big picture and appreciate the journey. The support system and connections are there as well, so we just have to stay healthy and on the winning track.”

“My goals are to be signed by a world-class promotional organization and hopefully make millions one day,” Lamson says. “The biggest reason I want to do that is to be a person who is able to make changes that make the lives of others better. I’d love to be able to give back to Flint and inspire other people with my story of success.”