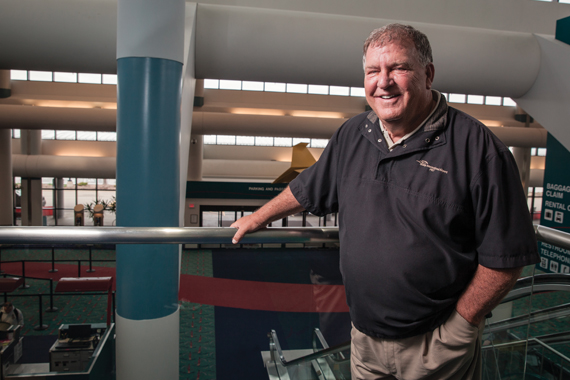 When My City stopped by Bishop Airport for a visit with Director, Jim Rice, it was a Casual Friday. Nearing the end of their day, the staff was chatting, anticipating the weekend. At the center of the high-spirited group was Jim, who wasn’t just looking forward to the weekend; he is also eagerly anticipating his upcoming retirement. He made the announcement earlier this year and will officially step down on October 8. While he has 25 years as Bishop’s director, Jim has been in the industry for over four decades. Prior to coming to Flint, he was the deputy director at an airport in Springfield, IL.

In 1987, the Bishop International Airport Authority was established. A headhunt was on for a new director and Jim was one of three candidates sought out for the job. He flew to Flint for his interview, and remembers his first glimpse of the airport and surrounding area as “not pretty” – the first things he saw were buckets on the terminal floor to catch leaking rainwater and the blinking neon sign of a Bristol Rd. massage parlor. “It was terrible!” he exclaimed. “I got off that plane and I wanted to turn around and go home.”

But after meeting with BIAA board of directors, Jim was taken in by their enthusiasm. “You could just see their excitement,” he remembers. So, when they offered him the job, he couldn’t turn it down. “It was both a challenge and a dream come true for me,” he said. Although Jim’s wife Ginny wasn’t eager to move to Flint, they soon established a good life here, living in the Flushing area and raising a family. “We couldn’t be more proud of our three children,” he smiles.

With the backing of a millage, Jim rolled up his sleeves and went to work. The airport that he describes as once looking like a very old bus station was transformed. In just two and a half years, Bristol Rd. (which Jim described as a piece of junk) and an old railway were moved and the new terminal was built. Under his leadership, improvements continued over the years and since the new terminal’s completion, five expansions have been made. “We’ve had the support of everybody!” Jim exclaimed. The Mott Foundation helped with several grants over the years and Citizen’s Bank loaned $12 million. “We couldn’t have done it without them,” he says. Jim is very proud of the advancements that have been made at BIA. “We were a diamond in the rough,” he says. “I feel proud to have been the director, but I didn’t do it alone. There were so many people who made this happen.”

Looking back on his long career, Jim has many fond memories. But there were some bad days, too. One he will never forget is September 11, 2001, the day that changed everything for the U.S., and particularly its airports. On that day, he was attending a conference in Montreal, Canada with airport directors from all around the world. Since he was unable to fly that day as all planes were grounded, he rented a car in Montreal and drove home. It took five hours to cross the bridge, he remembers. “9/11 changed the way people fly,” he says of the additional screening and security measures that are now part of everyday life. “I don’t see it ever changing, but I believe that it’s worth it to keep our passengers safe.”

What does Jim most look forward to in his upcoming retirement? “My family is very important to me,” he says. “I want to spend more time with them; that’s why I’m moving on.” His plans also include a lot of traveling. One destination on his Bucket List is Bari, Italy, where his mother, who was a war bride, was born and raised. “I want to go to the places she always talked about,” he says, “and swim in the ocean where she swam.” He is looking forward to trips with his wife to visit his son and grandson, who live in Denver, CO. And after the especially harsh winter, he looks forward to spending future winters in warmer climates. “I’m just going to enjoy life,” he smiles. Jim says that of course, the downside is that he’ll miss all the friends he’s made along the way. “I love my job and the people I work with,” Jim says. “I’ve been so blessed; the people at Bishop are just great.”

But, after 44 years of sometimes working 14-hour days, Jim is ready for a break. Stealing a quote from former Detroit Tigers’ manager, Jim Leland, he says, “My tank is running low. We need to find a new director with a full tank of gas!” Bishop Airport is once again on the headhunt for a new director and Jim has some advice for the person who will fill that role. “Listen. Listen. Listen! There is a lot more to be accomplished here.”

See more photos HERE, or purchase photos from this story by going HERE and selecting the “BIA Jim Rice” category.