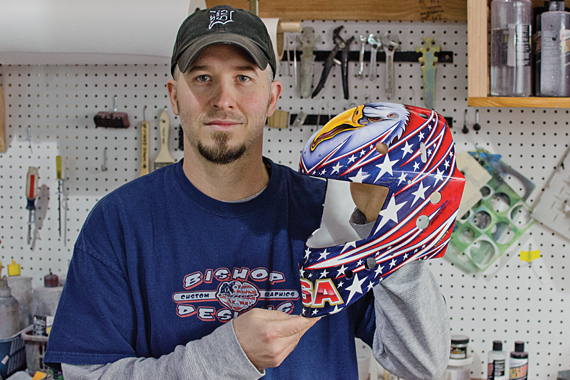 Ray Bishop of Bishop Custom Design has been described as “a 12-year-old living in a 41-year-old’s body.” As a little boy, he loved to play with Hot Wheels and Match Box cars. He also loved assembling model cars and customizing them with his own designs. To turn the car into a piece of art, he’d use anything he could find – White Out, finger-paint, his mother’s nail polish, and even his Dad’s soldering wire; you name it, and he experimented with it. “I was always customizing something,” Ray laughed. Little did he know that the creativity he honed as a child would lead to worldwide recognition of his talent. His latest project was the design and artwork for goalie masks and helmets worn by the 2014 Winter Olympic hockey team.

It was a mad dash for Ray to finish customizing helmets for Team USA Hockey goalies Jimmy Howard and Ryan Miller, who competed in the Winter Olympics in Sochi, Russia this February. Ray said Jimmy wanted a stars-and-stripes theme for his mask, so it was painted using a wing pattern. An eagle’s face on the forehead area completed the bold, patriotic motif. Miller’s mask features a fearsome bald eagle on the left side and a brawny Uncle Sam on the other, an update of the mask that served him so well at the 2010 games.

This is the fourth Winter Olympics for which hockey players chose to wear equipment featuring Ray’s artwork, and customizing goalie masks has become his niche. “My artwork has touched people all over the world,” smiles Ray, having created designs and artwork for people in Sweden, Russia, Germany and South Korea. “In this type of medium, I am very well received,” he said humbly. “The good Lord blessed me with my talent.”

Ray’s journey to success began soon after he became engaged to his wife, Nan. They were living in Farmington Hills, and he answered phones for a company that handled leased vehicles for Ford Motor Company. “I hated every minute of it,” he laughs. He began to think about what he wanted to do with his life. Ray told Nan that he had always wanted an airbrush gun for painting. “Well, let’s go get you one,” was his wife’s reply. One year after that purchase, he had his own business. “I didn’t want to sit behind a desk,” said Ray with a sheepish smile. While seeking a canvas for his artwork, Ray obtained some street hockey masks and embellished them. He visited area ice rinks and pro shops with examples of his work and offered to paint hockey helmets for local skaters. He also practiced his craft and improved his technique. His business really began to blossom after he watched a Detroit Vipers hockey game on TV at a New Year’s Eve party. “The goalies were wearing plain, white masks!” Ray exclaimed. He made some phone calls and got his first job doing helmet art for Jeff Reese, a Detroit Vipers player. A hockey equipment manufacturer in Port Huron area saw Ray’s handiwork, and the venture snowballed from there. He began doing artwork and designs for masks worn all around the country.

Several Detroit Red Wings players have skated wearing Ray’s helmet art, including Chris Osgood, Dominik Hasek and Ty Conklin. He even painted a hockey mask for Nicklas Lidstrom’s son, as well as a custom design on a motorcycle the Red Wings used for a fundraising event. “It turned out very cool!” he remembered. Ray’s design concepts come to him constantly, and he says he receives inspiration when he wakes up in the morning. “I fall asleep with ideas in my head,” he said, and the long process begins from there. “A lot of work goes into the helmets,” said Ray, who spends 40 to 60 hours completing just one piece. “It’s not cookie cutter stuff!” he exclaimed, “There’s definitely a lot of time involved in each project.”

Ray lives in Grand Blanc with his wife and their four children: Nicholas, 13; Kaitlyn, 11; Nathan, 7; and Emelia, 5. The kids are home-schooled and they’ve each embraced some form of artistic expression such as coloring, drawing, and building with Legos. Ray believes that his son Nathan may just follow in his footsteps. “He plays like I did when I was a little boy,” Ray laughed.

Having recently teamed up with his best friend and business partner, Matt Carter, Ray looks forward to expanding his venture. “I call it ‘the shop’ and Matt calls it ‘the office,’” Ray said playfully of their new facility in Grand Blanc. Nan Bishop and Matt’s wife, Lisa, are also partners in the business. “He is so talented,” says Lisa of Ray. “For him, anything is a canvas.” Ray agrees, smiling, “If it will hold still long enough, I’ll paint it.” His body of artwork extends far beyond hockey helmets, to guitars and drum sets for rock bands and country musicians. He even painted a baby grand piano and designed an album cover for the Boulder Bassoon Quartet.

Ray’s talent is admired by people all over the world, but one of his many Facebook fans, Michael Fadden, says it best. “Your work should be on display at a gallery. Each piece is better than the last.” Ray says his hope is to continue developing his talent. “I always strive to make each piece better than the last,” he says. “I’ll never stop learning.”

See more photos HERE, or purchase photos from this story by going HERE and selecting the “Hockey Art” category.