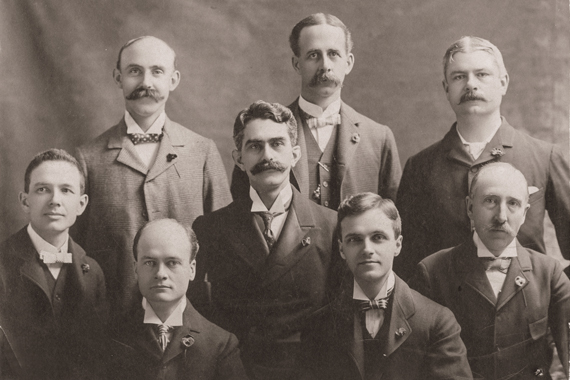 Dallas C. Dort, grandson of J. Dallas Dort, took time to share with My City Magazine a private view of his grandfather’s character and legacy. Although he never knew his grandfather personally, Dallas grew up hearing about him, gaining a strong impression of J. Dallas’ work ethic and personal greatness. To honor and continue that legacy, Dallas C. served with pride on the board of trustees at the FIM—the music association begun by his grandfather—for many years, and as the chair of the board from 2005 to 2007. After preparing a compilation of resources on his grandparents for his family file, Dallas C. says, “I feel like I know him pretty well, now.” Below are some of Dallas’ thoughts about his grandfather.

Grandfather was a diligent man, who saw more than anyone else that the sleepy little town of Flint—as it was when he arrived in 1880—was going to be transformed, and he knew that the leaders of the community would make the difference between the squalor noticeable in other cities that had experienced explosive growth and the prosperous, cultural city he desired to see. When Dort began the carriage company with Durant, the population of Flint was somewhere in the neighborhood of 8,000 people. In 1922, the population had reached close to 100,000. In terms of living conditions, this growth was a disaster. Grandfather was very involved in city-planning, and he was responsible not only for the workers’ association, which saw to his employees’ needs, but also for the city design and parks, which provided a clean, pleasant city for its inhabitants. Many of the parks—Burroughs, Wilson, etc.—are located on tracts of land bought and donated by Dort.

Durant was a serial entrepreneur—he loved the thrill of business. Durant was a shooting star: more driven, more focused than anyone you’ve ever met. Grandfather, by contrast, was a warm fire. Really though, Durant and Dort were such a complementary pair, and they were always close, even after their formal business ties were dissolved. Goodness knows that Billy built the business, but it really was a mutually-beneficial partnership. Durant was adroit at raising capital, but grandfather was no sales dummy. Durant sought and benefitted from grandfather’s input, and they were perhaps one of the most successful business partnerships in America. However, as Durant moved on to ever-grander dreams, Dort became increasingly captivated by the community. After that first fortune, although he was busy, he devoted his time to civic concerns, and was exceedingly generous in his relationship with Flint. My grandmother used to recall an incident when, one night as he pondered his involvement with Flint, he said to her, “I just don’t know whether we’re rich or broke.”

My grandmother was with him during the time of his life when he was most civically involved. She was 44 years old when he died, and for the next 53 years, until her own death at the age of 97, she could never even think of another man. She absolutely adored him, and it was clear that he had adored her. I remember what she said of their first meeting, that he was “handsomest man” she had ever seen. They had a happy life, actively involved in helping shape a community that was going through explosive growth.

The thing that makes me most proud of my grandfather is something that many people don’t know, concerning the Dort Motor Car Company. When it went under in 1925, shortly before his own death, investors stood to lose the money that they had invested in the company’s stocks. My grandfather bought back the stock from all of the investors at its original value because he didn’t want them to go down with the company. I don’t know how wealthy I would be today if he hadn’t done that, and I don’t care. It was one of his finest acts.

He was a wonderful man whom everyone loved. When he died, there was a line of people around the block of St. Paul’s to pay tribute to him. Even the schools were closed. In the end, I think his life was both thrilling and fulfilling, something to which we can all aspire.