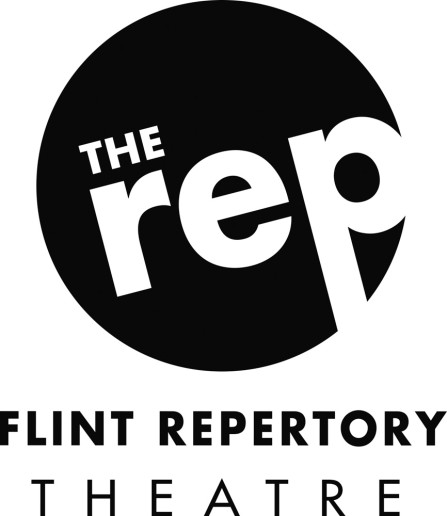 Since 1957, Flint Youth Theatre (FYT) has been a source of pride for the city and its residents. Located at the heart of the Cultural Center, FYT is Flint’s only professional theatre and the only professional youth theatre in Michigan. The drama school, serving children in grades 2-12, is second to none. Its workshops are informative and always welcomed – its productions fantastic. FYT is a perfect fit for the city and its youth, and it is now becoming more. The face and mission of FYT is growing and it was for this reason that I recently ventured there to talk with its young, Producing Artistic Director, Michael Lluberes.

On a beautiful summer day, I opened the FYT lobby door and found a tremendous bustle of activity. Children sat across from one another playing. Adult and adolescent volunteers were busy at clipboards working with energetic youth. Everywhere, the room was filled with the emphatic grace and smiling faces of young performers. It was a place of positivity and anticipation. 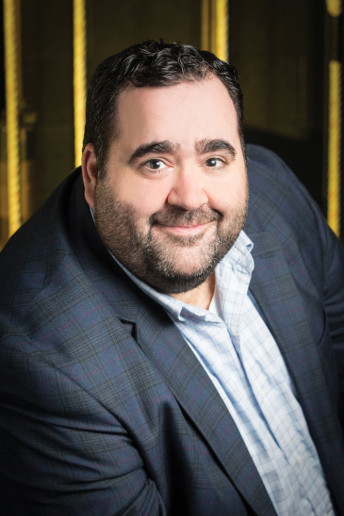 I was soon happily greeted by Michael Lluberes and welcomed to his office, where we talked about FYT and the new Flint Repertory Theatre. From the start of our conversation, Lluberes radiated a sense of energy akin to a man extremely passionate about his art. Like the fly that had found its way into the room with us, he buzzed, “I feel like I’m part of something remarkable happening here and it’s very exciting.”

Originally from Michigan but recently hailing from New York City, Lluberes has been with FYT for nearly 14 months. “It’s been incredible,” he said of his time here so far. “It’s been a great opportunity to create art on a ground level.” Upon seeing FYT for the first time, Lluberes was struck by the awesome talent of the staff and students, the magnificence of the building and the drive of the organization. As time passed, he began to wonder, “How can we use this to its maximum potential?” With the help of the Flint Cultural Center and the Flint Institute of Music, Flint Repertory Theatre (The Rep) was born. 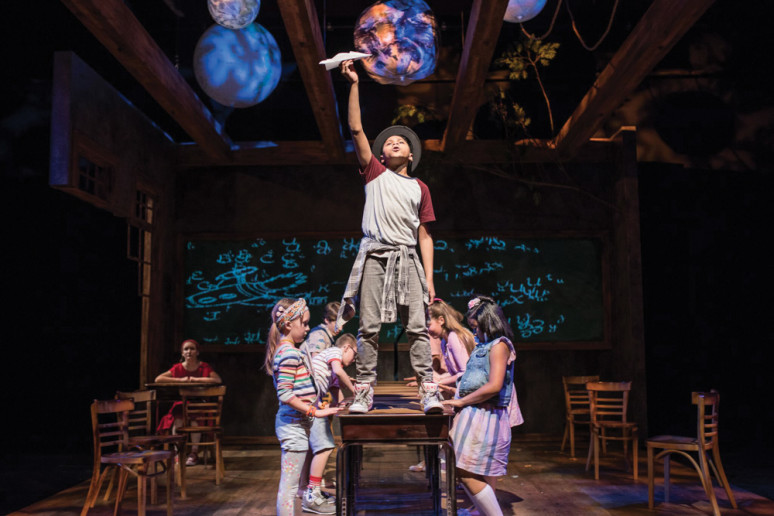 Aidan Allan Riggs and Company in The Geranium on the Windowsill Just Died But Teacher You Went Right On.

“Flint Repertory Theatre is a professional, not-for-profit regional theatre,” Lluberes explains. “We are basically taking what we have done for 60 years, opening it up and expanding it.” The Rep will grow from its current youth members to encompass all ages in training and entertainment. “Our new mission is to provide the community with highly imaginative, thought- provoking theatre that is challenging, entertaining and inspiring for all ages.” Lluberes adds. The Rep will offer classes and workshops for adults, as well as an eclectic Signature Series of diverse plays and musicals for adult audiences. Youth, however, will not be left behind. The Rep will continue to  produce plays for the entire family, highlighted by the upcoming Theatre for Young Audience series.

The Rep will be built upon the foundation of the FYT, not replace it. “We know how important FYT is to children and their parents,” Lluberes adds. “We are not taking away any of the great things that FYT is, but it’s going to look different, it’s going to feel different, it’s going to be different.” FYT will become a program of The Rep’s Education Department. In fact, the offerings of FYT will grow under the umbrella of The Rep. A new Young Playwrights Festival is in the works, as well as an FYT school tour. During the tour, FYT students will visit Genesee County Schools to perform and teach their craft. “We want to bring our artists to them – going into their classrooms, their auditoriums, their gyms – and making those places our theatre, as well,” adds Lluberes. 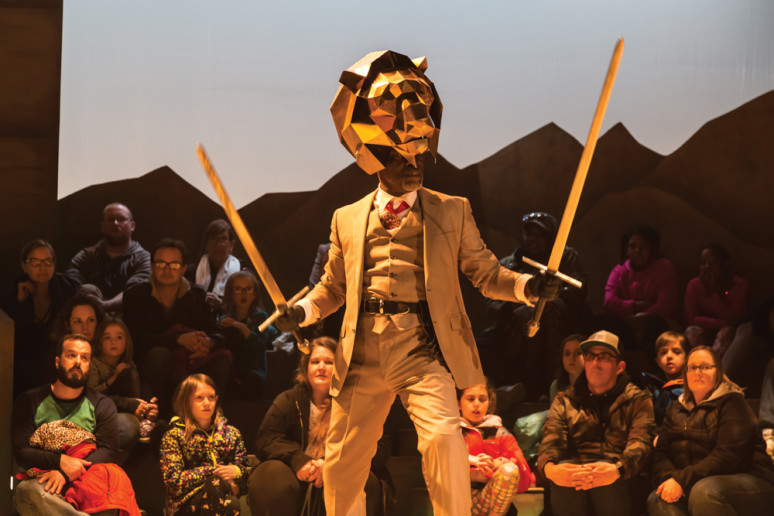 Rico Bruce wade in The Lion, The Witch, and The Wardrobe

For adults, the Education Department will provide classes and workshops focusing on such subjects as improvisation, comedy, Shakespeare, stage combat and more. Students will also have the opportunity to learn skills such as costume and set design, sound, lighting and projection.

Along with providing education, The Rep will create and produce bold musicals and plays. The offerings will be world-class and the new season will reflect the new direction. Three world premiere productions are on the slate: The Boatman by Alex Moggridge, Songs About Stuff: The Music of Wally Pleasant, and Riddle of the Trilobites will be seen for the first time at The Rep. “Flint is going to see these shows before anybody else in the world and they will have Flint attached to them wherever they go,” says Lluberes. “If the play goes to New York or Chicago, it will say Flint Rep on it. All the people who worked on it will go in spirit with that play.” This concept is new, and Lluberes says one of his goals is to create a hub for new works. “We are going to do bold interpretations of old plays, but what we really, really want to do is new world premiere plays and musicals.” For the upcoming season, Lluberes is bringing in nationally known directors and artists, such as Kathryn Walsh from Chicago, to direct this season’s production of The Wolves, a finalist for the 2017 Pulitzer Prize for Drama. For the world premiere of Riddle of the Trilobites, a new puppet musical, Lluberes has brought in Obie Award Winner, Lee Sunday Evans from New York. “We want to bring artists here and mix them together with local artists to create things that will have a life beyond the theatre,” he shares. The upcoming season will also feature the hit musical Assassins, the eternal classic The Glass Menagerie and the children’s classic, The Little Prince. The New Works Festival will also be back for its second installment in January 2019. For more information on the new season lineup, visit flintrep.org. 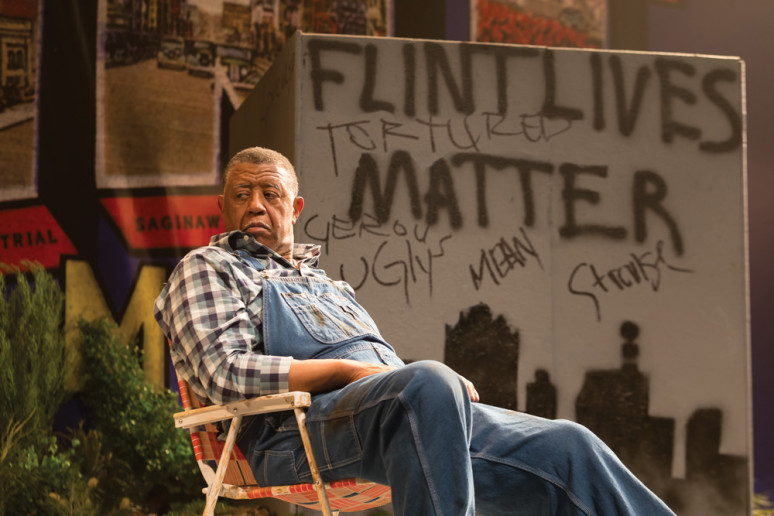 Bruce Bradley in Most Blank City

The creation of Flint Repertory Theatre will also have big implications for area college students interested in theatre. The Rep will offer new apprenticeship and internship opportunities, as well as professional fellowships in all areas of theatre. The UM-Flint alliance will continue to grow and eventually, students affiliated will have a chance to earn points toward their professional Equity Card by working at the theatre. “This opportunity is a game-changer for college students in the community,” Lluberes explains. “UM-Flint students now have a professional theatre to work at within walking distance.”

Potentially, a child could take classes at The Rep, perform with FYT, move on to college, intern with the theatre, and upon graduation, be employed as a professional actor or technician or teaching artist at The Rep. “It’s cyclical,” states Lluberes. “We are currently training all these Flint kids and what happens when they graduate? They all leave – especially those in the arts. This will create sustainability and give artists a place to work at a professional level.” 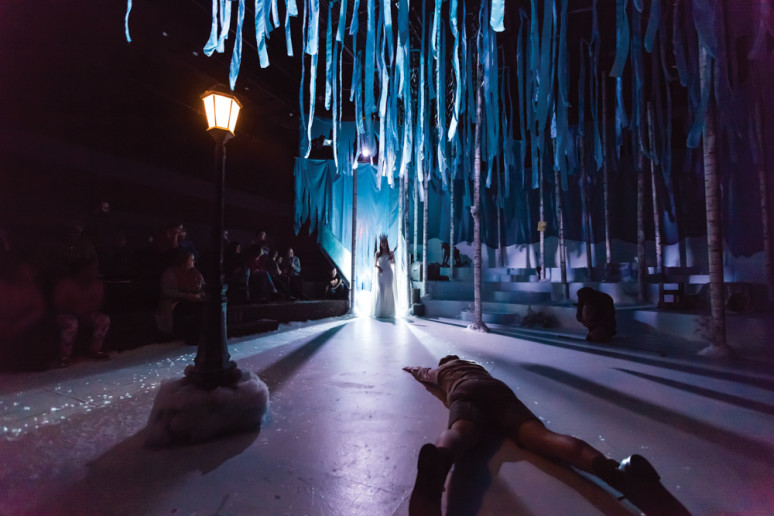 Janet Haley in The Lion, The Witch, and The Wardrobe

During the transformation, The Rep will get a slight facelift in the form of a re-dressed lobby. “We’ll give it a fresh paint job, it will have new furniture and new lighting,” Lluberes says. “We’ll put in a little cabaret stage that will be open for singer-songwriters or comedy. Eventually, you may be able to enjoy a drink – it will be a place where you can come early and stay late.”

The City of Flint is changing and becoming anew. Flint Repertory Theatre is an exciting and inspired part of the change. It is truly a theatre for everyone. “It’s a beautiful theatre and there’s so much potential here,” says Lluberes with a smile. “This is an amazing city and it deserves an amazing theatre.”

“We know how important FYT is to children and their parents. We are not taking away any of the great things that FYT is …”

Those interested in signing up for a class or workshop are invited to visit the Education Department of Flint Repertory Theatre at flintrep.org. If you are excited and interested in The Rep and would like to donate or become a sponsor, visit flintrep.org for more info.

Share. Twitter Facebook Google+ Pinterest LinkedIn Tumblr Email
Previous ArticleKnow Your Brew! 15 interesting Coffee and Beer facts to liven up the conversation
Next Article Professional golf is back! The Ally Challenge is the place to be Sept. 10-16